One of NIF’s key goals was to create a self-sustaining thermonuclear fusion reaction, mimicking the process that powers the sun and the stars. Credit: NASA/Solar Dynamics Observatory

For the last six decades, LLNL researchers and their colleagues have been working to achieve one of the most challenging goals in all of science and a primary objective of NIF: fusion ignition. The goal was reached on Dec. 5, 2022, thanks to a wide-ranging international partnership and sustained efforts by every aspect of NIF and LLNL operations—the laser, targets, optics, diagnostics, modeling and simulations, and the people who make it all possible (see “Keys to Our Success”).

Achieving ignition—producing more fusion energy than the amount of laser energy delivered to the NIF target—provides new opportunities for stockpile stewardship applications and enhances the prospects for an inertial fusion energy future.

In “indirect drive” inertial confinement fusion (ICF) experiments on NIF, up to 192 laser beams are fired into a centimeter-sized hollow cylinder called a hohlraum. This generates a “bath” of soft x rays that ablate, or blow off, the surface of a peppercorn-sized capsule suspended in the hohlraum.

The result is a rocket-like implosion that compresses and heats partially frozen hydrogen isotopes inside the capsule to conditions of pressure and temperature found only in the cores of stars and giant planets and in exploding nuclear weapons. The speed of the implosion—more than 400 kilometers per second—allows the fusion reactions to take place before the fuel can disassemble; the fuel is trapped by its own inertia (hence the term inertial confinement fusion). 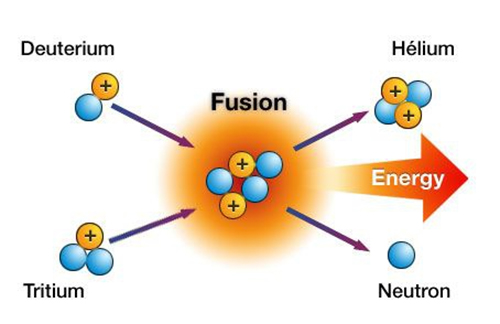 In a fusion reaction, nuclei of the two isotopes of hydrogen, deuterium (containing one neutron and one proton) and tritium (two neutrons and one proton), are forced together by extremes of temperature and pressure and fuse to form a helium nucleus. In the process some of the mass of the hydrogen is released as energy.

Fusion describes what happens when the nuclei of light atoms such as hydrogen overcome the repulsive electrostatic force that keeps them apart. When the nuclei get close enough, the force that binds protons and neutrons together, the strong force, takes over and pulls the nuclei even closer together so they “fuse” into a new, heavier helium nucleus with two neutrons and two protons.

The helium nucleus, also known as an alpha particle, has a slightly smaller mass than the sum of the masses of the two hydrogen nuclei, and the difference in mass is released as energy according to Albert Einstein’s famous formula E=mc2. The energy is released in the form of the alpha particles, high-energy neutrons, and other forms of energy such as electromagnetic radiation.

Nuclear fusion is different from nuclear fission, where the nuclei of heavy elements like uranium are split, forming two lighter elements—the process used in today’s nuclear power plants. In both nuclear reactions, the elements themselves change and become new elements—and in the process, a small amount of mass is converted to a large amount of energy. 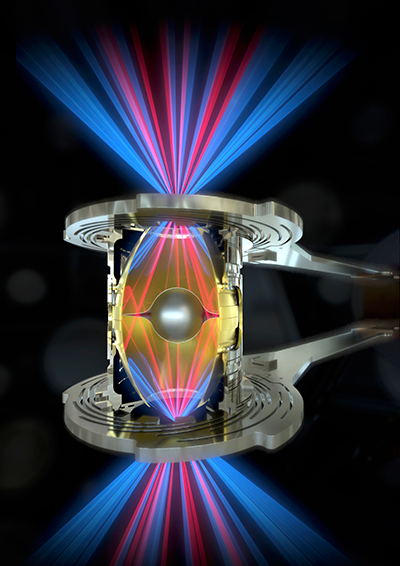 False-color illustration of laser beams irradiating a NIF hohlraum shaped like a rugby ball and holding an aluminum fuel capsule, one of several new target designs being explored on the NIF system. The laser beams enter the hohlraum through laser entrance holes and strike the inside of the hohlraum to generate x rays. The laser beams are arranged in two cones—an inner cone that is pointed toward the waist of the hohlraum and an outer cone that is pointed near the ends. Ignition is achieved when a self-sustaining fusion reaction produces more energy than the laser energy delivered to the target. Credit: Jacob Long

Fusion ignition occurs when the heating power from alpha particles produced by fusion reactions in the hot spot at the center of the target capsule overcomes the cooling effects of x-ray losses, electron conduction, and implosion expansion. When enough alpha particles are “stopped,” or absorbed, in the high-density fuel layer, a process known as alpha heating, a burn wave of fusion reactions propagates into the cold fuel surrounding the hot spot. When the energy deposition by the alpha particles contributes more than 50 percent of the heating of the fuel, a self-sustaining feedback loop known as a “burning plasma” results in an explosive amplification of energy output.

The NIF experiment on Dec. 5, 2022, far surpassed the ignition threshold by producing 3.15 megajoules (MJ) of fusion energy output from 2.05 MJ of laser energy delivered to the target.

Achieving ignition was an unprecedented, game-changing breakthrough that advances the science of ensuring the reliability of the nation’s nuclear stockpile (see “NIF and Stockpile Stewardship”) as well as the potential use of fusion as a safe, clean, and virtually unlimited energy source.

While reaching ignition on NIF proved more challenging than first expected, researchers gained new understanding of the process with every experiment. For example, they learned important lessons about the initial limitations of their simulations and used that knowledge to continually improve both the models and implosion performance.

In particular, the advent of high-resolution 3D modeling and simulations contributed to a better understanding of the perturbation sources—including such “engineering features” as the thin membranes that suspend the target capsule inside the hohlraum and the fill tubes used to inject fuel into the capsule—that interfere with implosion performance. Other factors inhibiting energy yield are laser-plasma and hydrodynamic instabilities, asymmetries in the hohlraum x-ray flux that drives the implosion, and the mixing of capsule material with the fuel.

The addition of new and enhanced diagnostics, such as multiple line-of-sight neutron detectors, also led to improved target performance. The ability of new high-performance supercomputers and powerful “deep learning” techniques to process, analyze, and simulate the mountain of data produced by these diagnostics in 3D over a broad range of perturbation sources—capsule surface imperfections, engineering features, drive asymmetries— significantly improved the ability of simulations to match, and even predict, experimental results.

Since the first NIF laser shots, scientists have set records for neutron yield and the amount of energy generated. Neutron yields have grown exponentially since NIF experiments began; more energy is being coupled to the target capsule; implosion velocities have increased; and the pressures in the center of the implosion are many times higher. The result has been a steady increase in energy yield that culminated with the NIF experiment that produced a yield of more than 3 MJ, more than twice the record yield of 1.35 MJ set in 2021 (see “Threshold of Ignition”).

“Nature does not give up her secrets easily.”

NIF also made history in May, 2018, when it fired a record 2.15 MJ of ultraviolet energy to the Target Chamber—a 15 percent improvement over NIF’s design specification of 1.8 MJ and more than 10 percent higher than NIF’s previous 1.9 MJ energy record set in March, 2012.

Researchers are now poised to further improve NIF’s performance by coupling even more laser energy to the capsule while maintaining symmetry control and minimizing fuel contamination from target capsule material, or “mix.” We also are pursuing strategies like novel hohlraum designs; larger and thicker capsules; magnetized targets; and new methods for finishing, mounting, and filling capsules.

We owe our progress to the decades of remarkable work by previous generations of LLNL scientists and engineers who advanced the field of high energy density and ICF science to where it is today. A new generation of LLNL researchers, some of whom are pictured below, are carrying on this tradition of excellence. 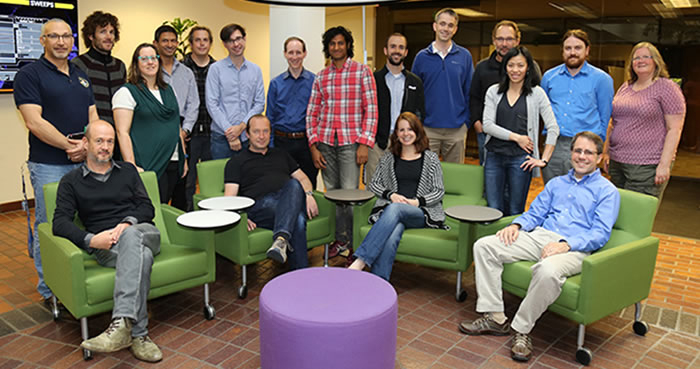 In achieving ignition, NIF researchers are fulfilling the vision of the early laser pioneers who conceived of using the x rays generated by a powerful, brief laser pulse to fuse hydrogen isotopes and liberate copious amounts of energy.

Following the completion of NIF construction in March 2009, scientists focused on installing, qualifying, and integrating the facility’s many systems and the required scientific platforms to support a wide variety of experiments. Precision experiments devoted to ignition began in May 2011 and have since produced unprecedented high-energy-density environments (see “Pursuing Ignition: A Decade of Progress”).

Here are some examples of recent ignition experiments:

“High-Laser-Energy Shot Puts NIF Back on Track Toward Ignition”

“Frustraum Hohlraum Design Is Shaping Up”

“Tracking the Causes of Energy Loss in NIF Implosions”

“The Shape of Things to Come,” Science & Technology Review, July, 2020

“On the Threshold of a Critical Milestone,” Science & Technology Review, April, 2019

“Climbing the Mountain of Fusion Ignition: An Interview with Omar Hurricane,” NIF & Photon Science News, May, 2015

“A Significant Achievement on the Path to Ignition,” Science & Technology Review, June, 2014

“On the Path to Ignition,” Science & Technology Review, March, 2013