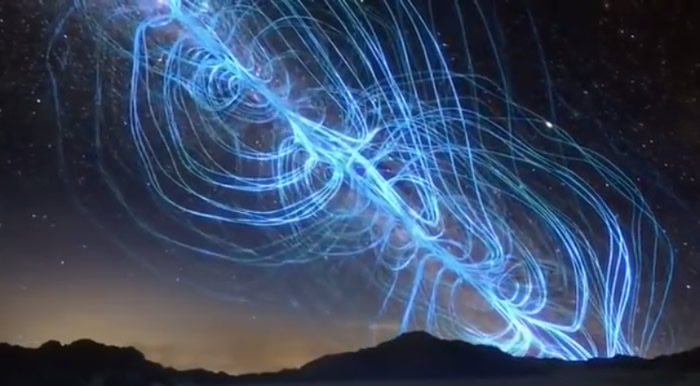 Almost all of the observable matter in the universe is in the plasma state. Formed at high temperatures, plasmas consist of freely moving ions—atoms which have lost some or all of their electrons—and free electrons. They are often called the “fourth state of matter” because their unique physical properties distinguish them from solids, liquids, and gases.

Plasma densities and temperatures vary widely, from the cold gases of interstellar space to the extraordinarily hot, dense cores of stars and inside a detonating nuclear weapon. Plasma densities range from those in a high vacuum with only a few particles inside a volume of 1 cubic centimeter to 1,000 times the density of a solid.

The Mystery of Self-organization

Scientists are using NIF to emulate plasma phenomena occurring in nature, such as interpenetrating plasmas. One of the mysteries of astrophysics is how highly organized structures such as magnetic fields stretching millions of light years can emerge from the frenetic motion of plasmas. An international Discovery Science campaign known as Turbulent Dynamo, or TDyno, is studying how small “seed” magnetic fields are amplified under the kind of turbulent plasma conditions that exist throughout the cosmos.

The initial gated x-ray detector (GXD) images from a TDyno experiment show the evolution of plasma turbulence over time.

The process by which this happens is called the turbulent dynamo mechanism. In everyday life, dynamos are machines that convert mechanical energy into electric energy. This is the way scientists believe seed magnetic fields in the early universe are amplified to the point where the plasma’s magnetic energy is on par with its kinetic energy, as is observed today.

The researchers trained intense, short-duration laser pulses on the end of a thin carbon rod (like the tip of a needle) held inside a helium-filled chamber to create shock waves. As the shock wave moved through the plasma in the chamber, a magnetic field was generated. Scientists believe this is what occurs in galactic clusters. While the initial seed fields are miniscule, simulations show that they could be amplified over about 700 million years to the strength we see in galactic clusters through the turbulent dynamo mechanism.

Researchers also are using NIF to investigate whether intersecting plasmas created by lasers are capable of forming collisionless shocks (where plasma constituents pass by largely without colliding with each other). Collisionless shocks are thought to be one of the mechanisms that can create seed magnetic fields, which the turbulent dynamo can then amplify.

Collisionless shocks appear in a wide array of exotic astronomical settings such as violent solar flares, outbursts from galaxies, and supernova remnants. Astrophysical collisionless shocks can’t be directly measured, so scientists look to laboratory experiments to better understand these phenomena.

NIF is the only facility capable of creating plasmas with sufficiently high density (greater than 1020 particles per cubic centimeter), high flow velocity (greater than 2,000 kilometers per second), and high temperature (greater than 1,000 electron volts) to approximate the astrophysical conditions observed in space.

NIF has produced the first relativistic electron-positron pair plasmas in a laboratory, enabling experiments on a state of matter found only in gamma-ray bursts, black holes, active galaxies, and the universe shortly after the Big Bang.

NIF experiments are designed to produce antimatter plasma at nearly the speed of light. These experiments use the Advanced Radiographic Capability, which produces more penetrating, higher energy x rays than is possible with conventional radiographic techniques.

Scientists first theorized nearly 40 years ago that ultra-intense lasers could generate antimatter. NIF will be essential to understanding antimatter plasma as well as many other fundamental plasma physics processes.

A team of LLNL and Los Alamos National Laboratory researchers has conducted a series of experiments on NIF aimed at determining the stopping power, or rate of energy loss, of particles passing through inertial confinement fusion (ICF) plasma. They did this by measuring rare reaction-in-ﬂight (RIF) neutrons produced by the implosion. The production of RIF neutrons is controlled by the stopping power in the plasma.

The experiments took advantage of NIF’s ability to create an unusual “partially degenerate” form of plasma. Degeneracy is the tendency of highly compressed subatomic particles such as electrons and neutrons to resist further compression. The interiors of super-dense white dwarfs and neutron stars, for example, are highly degenerate. Partial degeneracy characterizes the interiors of the lowest-mass stars, brown dwarfs, and giant planets.

The experiments enable scientists to learn more about the conditions in stellar objects like brown dwarfs, other astrophysical conditions, and the physics encountered in ICF implosions.