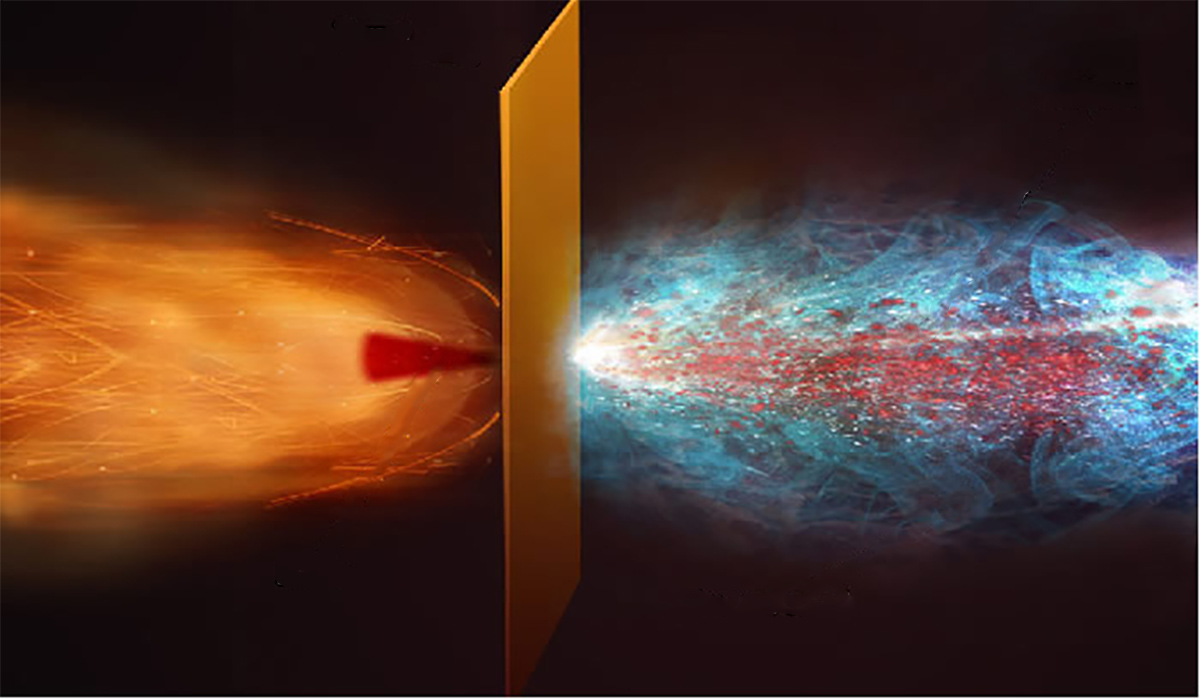 A Laser Within a Laser

NIF’s Advanced Radiographic Capability was able to create a high-energy stream of electrons and protons by irradiating a titanium foil target, as shown in this illustration of a typical proton-acceleration experiment. Credit: Andrea Macchi, et al., Rev. Mod. Phys., Vol. 85, No. 2, April–June 2013

ARC employs and extends LLNL’s expertise in high-energy petawatt lasers to enable multiframe, hard-x-ray radiography of imploding NIF capsules—a capability that is critical to the success of NIF’s mission.

Drawing on decades of high-energy and high-power laser innovation, LLNL commissioned the ARC laser in December 2015 as an important counterpart to NIF. To become one of the highest-energy short-pulse lasers in the world, ARC was not only built on the shoulders of NIF, but was also constructed by sharing components at the heart of NIF. 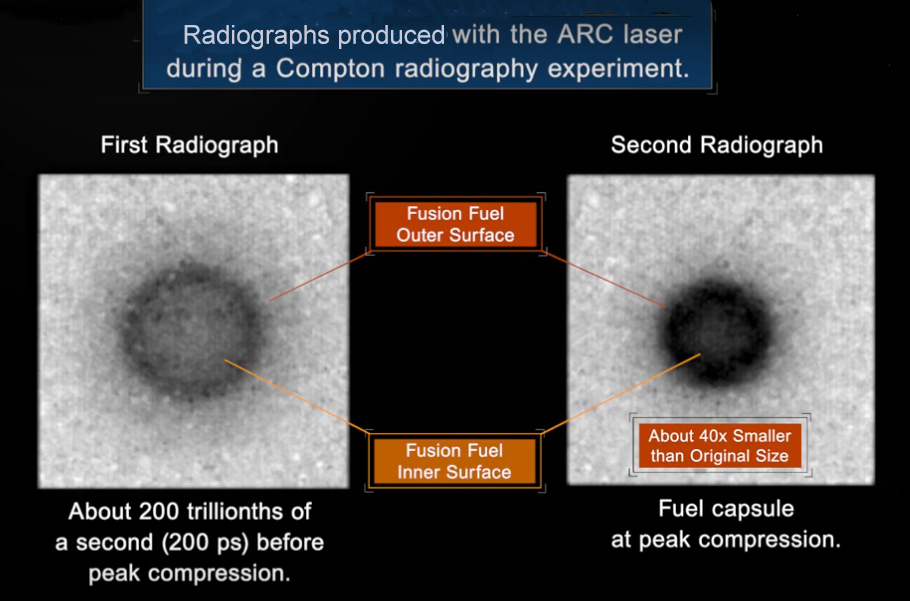 Radiographs of a NIF implosion produced by the ARC laser reveal what the fusion fuel and target capsule look like at two critical times—about 200 trillionths of a second before peak compression and at peak compression. These two radiographs allow scientists to see the inside of the extremely dense capsule just before it undergoes nuclear fusion. (Click to expand.)

Using a Nobel Prize-winning technique called chirped-pulse amplification, ARC is able to create picosecond (quadrillionth of a second)-duration laser pulses to produce energetic x rays in the range of 50,000 to 100,000 electron volts. The laser is a matchless tool for diagnosing NIF experiments and opening new frontiers in Discovery Science.

A Window on NIF Implosions

ARC uses two of NIF’s 192 beamlines, propagating two short-pulse beams for each NIF aperture in a split-beam configuration. Staggering the arrival of the ARC beamlets onto backlighter targets produces a sequence of x-ray images that enables researchers to look at implosions late in time and see what is happening at the final and most critical stages of an inertial confinement fusion (ICF) shot with tens-of-picoseconds temporal resolution.

Only ARC can generate x rays strong enough to produce radiographs on NIF that reveal this information. High-energy backlighting and Compton radiography backlighting are two applications of ARC that provide more detail than ever before. The results continue to enhance understanding of what is required to achieve ignition on NIF (Watch a Video).

Diagram shows ARC beamlet path (red) moving from NIF’s main beamlines to the compressor, parabolic mirrors, and into the Target Chamber (in cutaway). Some beamlines have been omitted to show ARC’s beam path. (Click to expand.)

In addition, researchers are using ARC for a wide variety of groundbreaking experimental campaigns investigating fundamental physics, helping broaden expertise in experimental high energy density (HED) science, innovations in diagnostics and target platforms, and insights into the nature of the universe.

One such campaign uses ARC to create a powerful new source of protons to study the extreme conditions deep inside the planets and the stars, enhance targeted tumor therapy, and advance the frontiers of HED science.

Another Discovery Science campaign is focused on matter–antimatter pair creation; in May 2018, experiments showed that positron-electron pairs traveling at near light speed can be produced on the ARC laser using a new specially-designed plasma lens to increase the laser’s intensity. The positrons emanated in jets from two sides of a gold target shaped like a triangular prism and mixed together with relativistic electrons to form a matter-antimatter plasma of electron-positron pairs. The studies could shed light on many high-energy processes occurring throughout the universe.

Many such Discovery Science platforms, diagnostics, and other capabilities have carried over to advances in stockpile stewardship.

The Jupiter Laser Facility (JLF) is an institutional user facility in the Physical and Life Sciences Directorate at LLNL. The only full-time intermediate-size user laser facility in the nation, JLF’s mission is to provide world-class support to the broad community of high energy density science researchers. The facility is designed to provide a high degree of experimental flexibility and high laser shot rates, and to allow direct user operation of experiments.

JLF’s high-energy, short-pulse Titan laser provides a unique platform for the use of petawatt-class lasers to explore laser-matter interactions under extreme conditions. JLF also includes the long-pulse Janus lasers and the COMET research laser as well as associated target chambers and diagnostics. 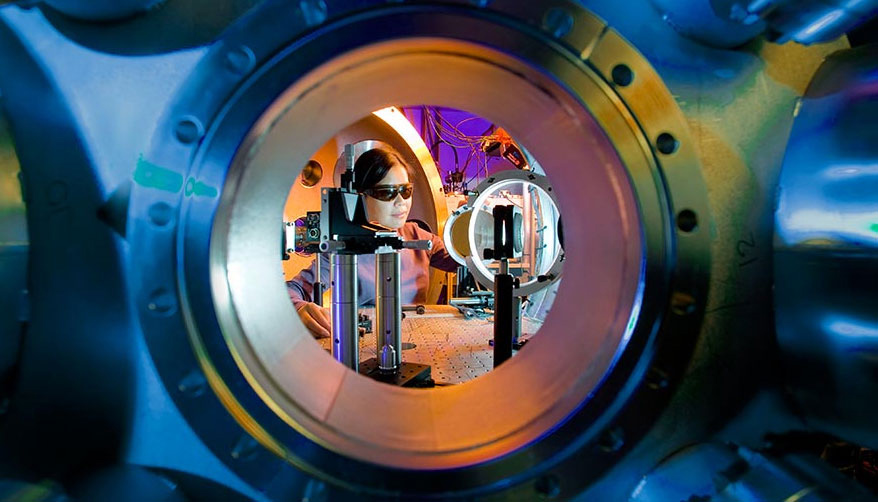 Plasma physicist Hui Chen looks through the Titan target chamber at the Jupiter Laser Facility. Chen researches electron-positron pairs with high-power, short-pulse lasers such as ARC and the Titan laser. JLF is part of LaserNetUS, an effort to restore high-intensity research in the U.S.

Next up: Fiber Lasers