When scientists saw the results from the first-ever Discovery Science experiment on NIF’s Advanced Radiographic Capability (ARC) laser, they were genuinely surprised: the experiment produced much higher energy electrons than predicted based on the laser energy and power used on these shots.

Those results, which were not typical of new experiments on new facilities, still required much more rigorous analysis — including complex computer simulations that only Lawrence Livermore National Laboratory (LLNL)’s world-class supercomputers could accomplish. But, as detailed in a Rapid Communication paper published March 4 in Physical Review E, scientists verified ARC can accelerate electrons to relativistic energy levels previously expected only from higher-intensity lasers.

“That means the electrons come out at much higher energy than you would suspect based on previous experiments,” said Bruce Remington, leader of NIF’s Discovery Science program. “It was a very big and a very pleasant surprise.”

The paper identifies a new regime of laser-matter interaction that is critical to all projects using ARC, since the electrons underpin the mechanisms for x-ray, proton, and ion production. The findings open new avenues of using ARC to explore the frontiers of laboratory science on topics such as gamma-ray bursts and black hole accretion disks, which are “hot topics in astrophysics,” Remington said. 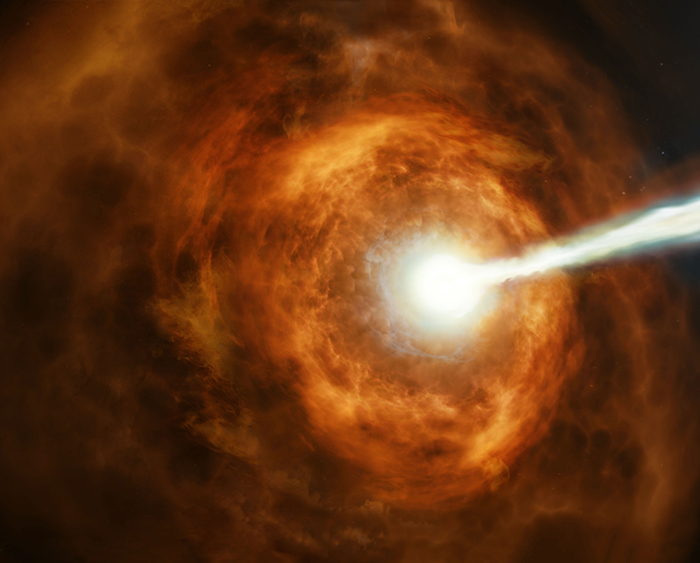 This illustration based on observations from NASA’s Hubble Space Telescope shows an artist’s rendition of a gamma-ray burst, the most powerful explosion in the universe. Credits: NASA, ESA, and Martin Kornmesser

The research originated in 2017 with the first Discovery Science experiment conducted on the petawatt-class ARC, which operates within NIF, the world’s largest and most energetic laser. Principal investigator Hui Chen’s campaign was designed to measure electron-positron pairs (see “NIF Creates Matter and Antimatter from Light”).

Chen and Remington said they had tempered their expectations going into that first shot. ARC’s short-pulse bursts of 10 picoseconds (1 picosecond is one million millionth of a second) are designed to produce 50-micron focal spots that were not supposed to be intense enough to generate relativistic plasmas.

ARC’s focusing mirror is about 30 feet from the target, leading to a focal spot 5 to 10 times larger than other comparable short-pulse laser systems, such as the Titan laser in LLNL’s Jupiter Laser Facility or the University of Rochester’s OMEGA Extended Performance laser.

For accelerating electrons, the “conventional wisdom was, intensity is the thing that matters the most,” said staff scientist Jackson Williams, the paper’s lead author. “Lo and behold, we got great results and with the follow-up shots, we got even better results.”

The team instead observed electrons with temperatures up to 2.2 million electron volts (MeV) generated with a laser intensity of 1018 W/cm2 (1 quintillion watts per square centimeter), “an order of magnitude higher temperatures than expected from a pondermotive scaling,” the paper said.

“We were thinking, ‘Wow, how did that happen?’ ” Remington said. “Usually, the surprises are bad, that the experiment didn’t work like you thought it would. In this case, it was the other way. Not only did it differ from what we thought was going to happen, it differed in a way that made the science better.”

“It was a surprise to us all,” Chen said. “We got electrons that were way hotter than expected.”

Even though a subsequent Discovery Science campaign led by LLNL physicist Tammy Ma to further explore proton sources showed similar results, “It took a while to understand what was going on,” Chen said.

The researchers had expected the accelerated electrons would behave as they do inside a tighter, higher-intensity laser spot, bouncing and accelerating a few times within the laser’s acceleration field before they bounce transversely — laterally — out of the field.

However, “the data was so completely different from what you would expect from a theoretical point of view,” said physicist Mark Sherlock, who analyzed the data. “We knew something very different was happening.”

It turns out that the electrons stayed within the laterally larger electric field created by the laser, allowing them to be accelerated hundreds or thousands of times, Remington noted.

“When you have a really big laser spot, the electron stays in a region of high intensity as it naturally moves transversely and therefore is able to gain energy for a long time,” Williams said. “That compensates for not having the intensity that we might have on a smaller laser. On paper, we did not expect this.”

There was another unexpected benefit: intensities within the laser were not smooth, causing small imperfections that also helped electrons gain energy, although in a random fashion. If the laser was perfect, electrons gain energy and lose energy in a smooth fashion, but with ARC, they randomly gained more energy than they lost, Sherlock said.

“It’s a stochastic (random) process — sometimes it gains, sometimes it loses, but on average it gains,” he said. “Interestingly, the good results came from imperfections. We think this might be a dominant mechanism in many laser-plasma interactions, not just at ARC. Maybe we stumbled on something that’s related to these imperfections.”

The computer simulations modeling the interaction of the ARC laser and the target were very intensive, “probably some of the biggest calculations that have ever been done for laser-plasma interactions,” he said.

The simulations were run on LLNL’s 3-petaflop Quartz supercomputer on about 2,400 processors using the plasma physics simulation software Chicago, said Anthony Link of the National Security Engineering Division’s Plasma Engineering Group. Those simulations took about 260 hours of computer time spread out over nearly a month.

“We thought having a large spot at ARC might be a handicap, but it turned out to be a large advantage to us,” Williams explained. “And we think we understand the physics that goes on in this very complicated, very chaotic environment. Having an idea of what that mechanism is means that we can build upon it and make alterations to try to optimize the system.”

Remington said the findings are not only useful for inertial confinement fusion research but open up new regimes of laboratory astrophysics first contemplated when NIF’s predecessor, the Nova laser, was operating more than 20 years ago but were set aside for a future time when the technology caught up.

“I’d call it macroscopic relativistic plasma physics,” he said. “We now have a test bed where we can do relativistic astrophysics.”

Focusing Targets Give over 10x Performance Boost to NIF’s ARC