Nearly 20 years ago, researchers conducting experiments on LLNL’s Nova Petawatt laser system—the world’s first quadrillion-watt laser— discovered that when the system’s intense short-pulse laser beams struck a thin foil target, an unexpected torrent of high-energy electrons and protons streamed off the back of the target.

Then earlier this month, an international team of researchers used the Nova Petawatt’s successor, NIF’s petawatt-class Advanced Radiographic Capability (ARC), to begin developing an experimental platform that promises to turn Nova’s surprise discovery into a powerful new source of protons to study the extreme conditions deep inside the planets and the stars, enhance targeted tumor therapy, and advance the frontiers of high energy density (HED) science. 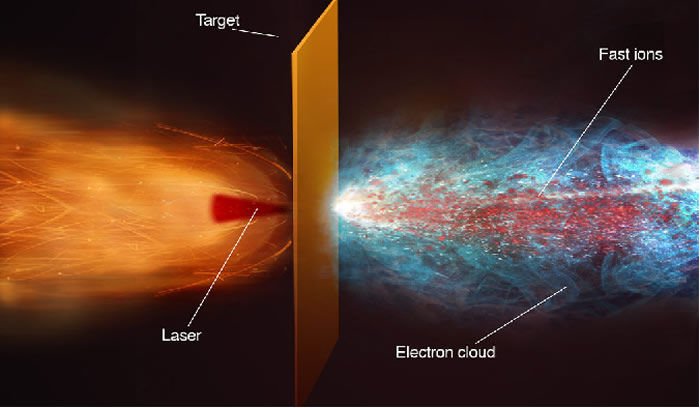 In two NIF Discovery Science experiments on Feb. 11-13, the researchers fired four ARC beamlets at a 33-micron-thick titanium foil, setting up a strong electrostatic sheath field called a Target Normal Sheath Accelerating (TNSA) field perpendicular to the target (normal is a geometric term for perpendicular). As the field blew away from the back of the target, it accelerated high-energy protons and ions from the contamination layer of proton-rich hydrocarbons and water coating the target’s surface, all moving rapidly in the same direction.

“The results were as good as we had hoped for,” said LLNL physicist Tammy Ma, the campaign’s principal investigator. “It was definitely a win. ARC is not as intense as a lot of other short-pulse lasers, so some in the community were concerned that the intensities might not be sufficient to generate these beams. But (the result) was more protons than we expected with energies approaching 20 MeV (million electron volts)—definitely a source that will enable other applications and cool physics.” 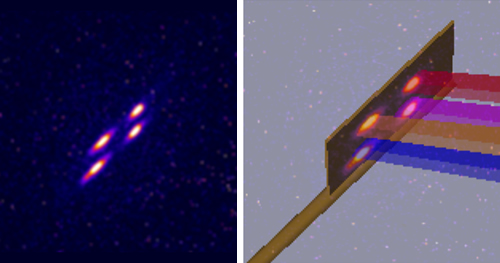 In the experiments, two of NIF’s 192 beamlines were split to form the four short-pulse ARC beamlets. The beamlets were fired simultaneously for ten or one picoseconds (trillionths of a second), generating up to 200 terawatts (trillion watts) of power per beamlet. The total of about 700 terawatts in the second experiment was the highest peak power yet generated on NIF.

ARC’s high peak power is made possible by a process called chirped-pulse amplification, in which a short, broadband pulse generated by an oscillator is stretched in time to reduce its peak intensity, then amplified at intensities below the damage threshold in the laser amplifiers, and finally compressed to a short pulse and highest peak power in large compressor vessels.

The new Discovery Science platform, supported by LLNL’s Laboratory Directed Research and Development (LDRD) program, is designed to study the physics of particle-beam generation at previously unexplored ultra-high short-pulse laser energies and long pulse durations. Coupled to NIF’s 1.8 million joules of ultraviolet energy, the capability will enable a myriad of HED applications and allow the creation and study of extreme states of matter. 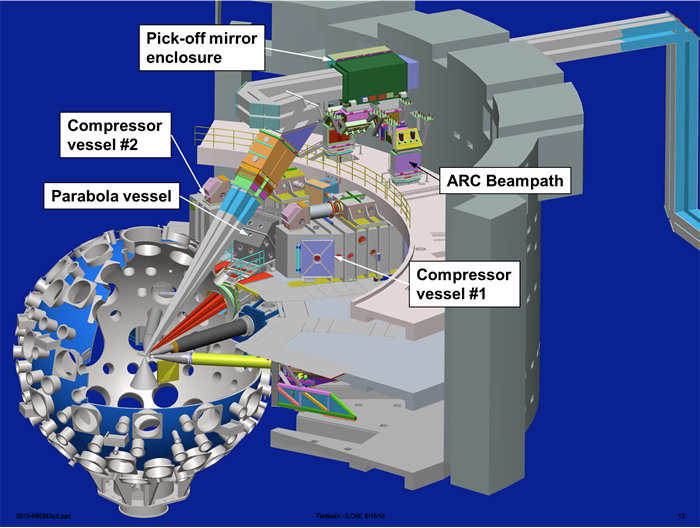 After amplification in the NIF laser, the ARC beamlets are compressed in the Target Bay and focused to Target Chamber Center.

NIF is the world’s only facility capable of achieving conditions like those in the interiors of stars and giant planets. Using ARC short-pulse generated proton beams for ultrafast heating of matter to extreme states will enable opacity and equation-of-state measurements at unprecedented energy-density states.

In addition, “protons deposit their energy very specifically,” noted LLNL postdoc Derek Mariscal, lead experimentalist for the project. “That’s why protons are promising for applications such as tumor therapy. You can send a beam of protons toward a tumor and get it to deposit all of its energy exactly where you want it to without damaging other areas of the body.

“Likewise with a solid material,” he said. “(The proton beam) deposits its energy where you want it to very quickly, so you can heat up a material really fast before it has time to hydrodynamically expand—your material stays dense, and that’s the name of the game—high energy, high density.”

Once the proton-acceleration platform has been demonstrated and understood, Mariscal said, the next step in the project will be to fire the ARC beams at a deuterated carbon (CD) foil to generate a beam of deuterons. “You could impact those onto a second foil, like lithium fluoride or beryllium, and then you get a beam of neutrons—a real, laser-like neutron source, only using two beams of NIF instead of all 192.”

Along with managing the project, Ma serves as the LLNL liaison with the collaborating institutions: the University of California, San Diego (UCSD), General Atomics (GA), Oxford University, the SLAC National Accelerator Laboratory, Rutherford Appleton Laboratory (RAL), Los Alamos National Laboratory (LANL), the University of Alberta, and Osaka University. Scott Wilks, who was a member of the team that discovered the TNSA process on the Nova Petawatt laser, is coordinating the theory and modeling effort. 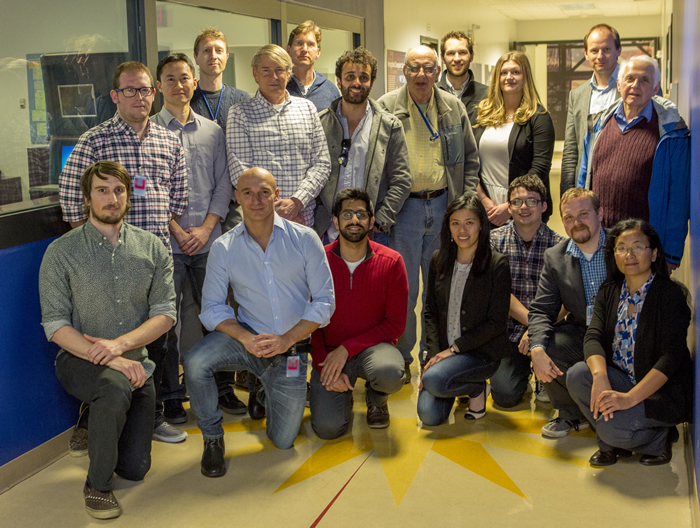 The proton acceleration shots were among a week-long series of Discovery Science experiments on NIF beginning on Feb. 11. Four other campaigns studied planar direct-drive hydrodynamics, the iron melt curve for studying magnetospheres and exoplanets, high-pressure compressed carbon, and laser-driven magnetic field generation. Principal investigators for those experiments were Alexis Casner from the University of Bordeaux, Russell Hemley from the George Washington University and the Capital/DOE Alliance Center, Justin Wark from Oxford University, and Brad Pollock from LLNL.

First there was Lowfoot. Then came Highfoot. And now LLNL researchers are conducting NIF experiments using Bigfoot—not the fabled Sasquatch of the Pacific Northwest, but an experimental platform designed to control implosion symmetry and hydrodynamic instabilities, improve predictability, and enhance the delivery of laser energy to NIF’s targets.

The campaign combines a short, six-to-seven-nanosecond (billionths of a second), high-energy laser pulse with a strong initial shock, or foot, (hence the name “Bigfoot”) to drive a high-velocity target capsule implosion. The revised pulse shape increases the fusion fuel’s adiabat, or resistance to compression, but the researchers believe the lack of compression can be offset by higher velocity.

The campaign also provides a better understanding of the trade-offs that stand in the way of improved implosion performance. 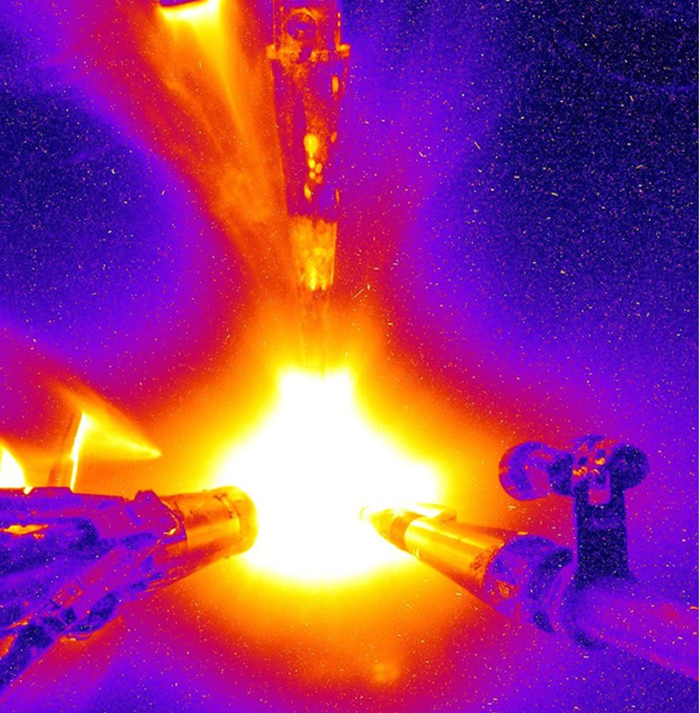 The Bigfoot approach “is similar in strategy to the Highfoot, but a more extreme version,” said Omar Hurricane, chief scientist for LLNL’s Inertial Confinement Fusion (ICF) Program (see “Ignition Experiments”). “You back off of compression to try to get a more controlled implosion, and it gives you a chance to be closer to your model expectation” than in previous experiments.

“We can make this thing just scream—it can go very, very, very fast.”

“All the other (implosion) parameters matter, but the velocity matters a lot more than anything else,” he said. “A little bit more velocity buys you a lot in performance.” Higher velocity means higher temperatures, and the Bigfoot campaign “has accessed some of the highest temperatures and the highest velocities of any ICF implosions to date, on the order of 420 to 430 kilometers per second. Velocity also buys you compression—your ability to densify the implosion. 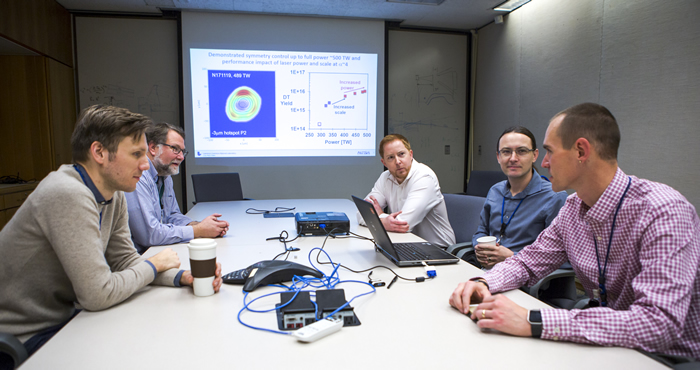 To address this challenge, while also further refining the computer models that simulate NIF experiments, Bigfoot shots try to take advantage of the benefits of predictability, control, and energy coupling. “In this approach we attempt to minimize uncertainty,” said Cliff Thomas, the Bigfoot design campaign lead, “and instead, seek a target that is predictable.” 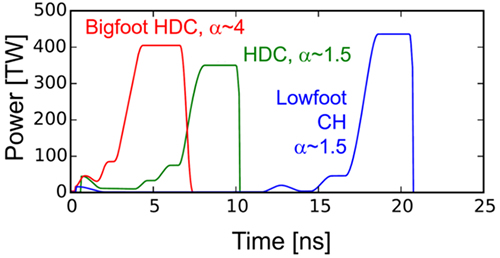 Casey said a key to the success of the campaign to date has been the platform’s ability to take full advantage of NIF’s laser energy. “The power of operating in a place that’s predictable,” he said, “is that you can design a system that can optimally use NIF. That’s how we’ve been able to get all the way to 500 terawatts (of peak power)—by having a model of the hohlraum that has worked, and engineering the system such that inner and outer (laser) cones can be at the same power, maxed out at 500 terawatts. There’s a trade-off in engineering a system that doesn’t get to as high a compression, but you gain back this ability to design an experiment that tests just what you want.”

Another feature of the Bigfoot campaign is the continued progress toward near-record energy yields demonstrated over the last few months. 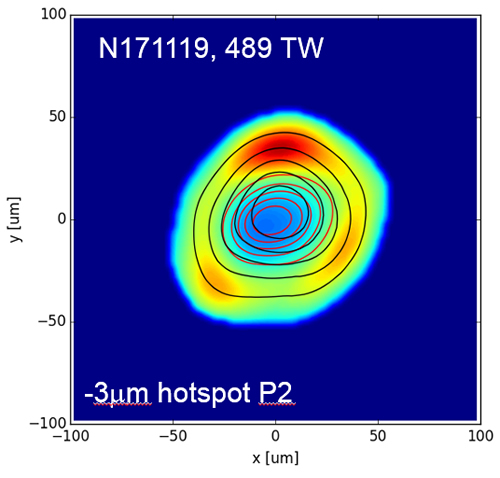 “With a strong predictive hohlraum model and accumulated knowledge from our previous campaigns, and a new (design) concept that is a little bit more conservative,” said Brian Spears, a member of the experimental design team, “we were able to increase the yield by a factor of 100,” in a chronological sequence of eight shots using deuterium-tritium fuel.

“Our theories and simulation codes tell us how to trade off competing effects” such as velocity and compressibility, Spears said. “But our best predictions in the past have said that we should have as low an adiabat or as compressible an implosion as we can, and we should give up velocity to get there.

“So now we’re going to allow this target to be less compressible, and the tradeoff that we get back for it is that we can make this thing just scream—it can go very, very, very fast. And it looks like we win more in that trade than our simulation codes predict.

“If in that progression from Lowfoot to Highfoot to Bigfoot, there’s something going on that’s different in reality than in our codes, we can learn that way. We can go back and modify our codes to represent what’s going on in the experiment, or adjust our experiment to put ourselves in a regime that looks more like our codes. Finding things we don’t expect is how we’re going to actually get better.”

“Does the system behave the way we want, or is reality a little different?” Thomas added. “If we’re successful in this approach, we should end up with the information that will guide us to doing even better.”