NIF's Guide to How Lasers Work

A laser is created when electrons in the atoms in optical materials like glass, crystal, or gas absorb the energy from an electrical current or a light. That extra energy “excites” the electrons enough to move from a lower-energy orbit to a higher-energy orbit around the atom’s nucleus.

A laser takes advantage of the quantum properties of atoms that absorb and radiate particles of light called photons. When electrons in atoms return to their normal orbit—or “ground” state—either spontaneously or when “stimulated” with a light or other energy source, even another laser in some cases, they emit more photons.

Energy from light “excites” electrons in atoms of optical materials and they move to a higher-energy orbit. When the electrons return to their normal orbit spontaneously or when “stimulated” with light or energy, they emit light particles called photons. Credit: James Wickboldt (Click to expand, use keyboard arrow keys to view all graphics.)

Light moves in waves. Ordinary visible light, say from a household light bulb or a flashlight, comprises multiple wavelengths, or colors, and are incoherent, meaning the crests and troughs of the light waves are moving at different wavelengths and in different directions.

In a laser beam, the light waves are “coherent,” meaning the beam of photons is moving in the same direction at the same wavelength. This is accomplished by sending the energized electrons through an optical “gain medium” such as a solid material like glass, or a gas.

The particular wavelength of light is determined by the amount of energy released when the excited electron drops to a lower orbit. The levels of energy introduced can be tailored to the material in the gain medium to produce the desired beam color.

A mirror on one side of the laser’s optical material bounces the photon back toward the electrons. The space between mirrors, or the “cavity,” is designed so the photon desired for the particular type of optical gain medium are fed back into the medium to stimulate the emission of an almost exact clone of that photon. They both move in the same direction and speed, to bounce off another mirror on the other side to repeat the cloning process.

Two become four, four become eight and so on until the photons are amplified enough for them to all move past the mirrors and the optical material in perfect unison. Think of them as synchronized members of a marching band in the Rose Parade. And that unison gives the laser its power. Laser beams can stay sharply focused over vast distances, even to the moon and back. 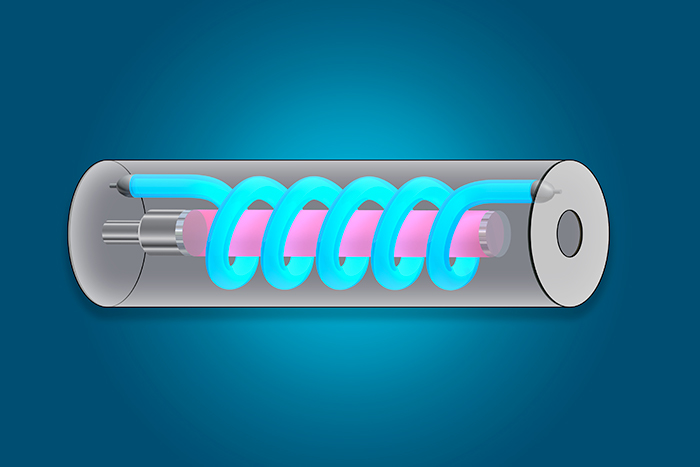 1. A basic laser, like this red ruby laser, consists of a rod made of ruby crystals with a mirror on each end, and a flash tube. 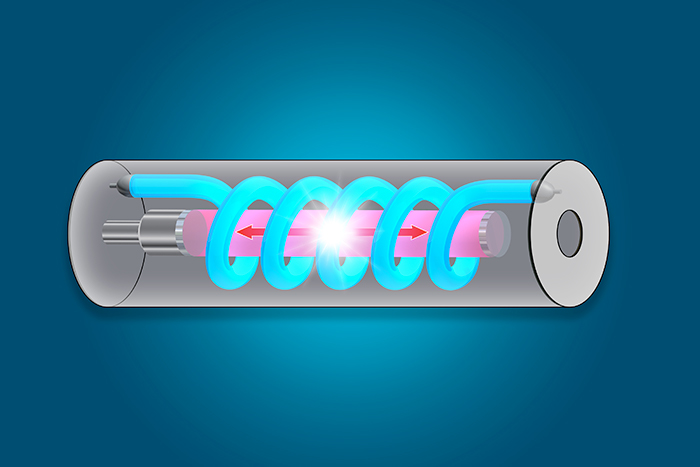 2. A burst of light from the flash tube adds energy inside the rod, exciting the ruby atoms and producing light particles called photons. 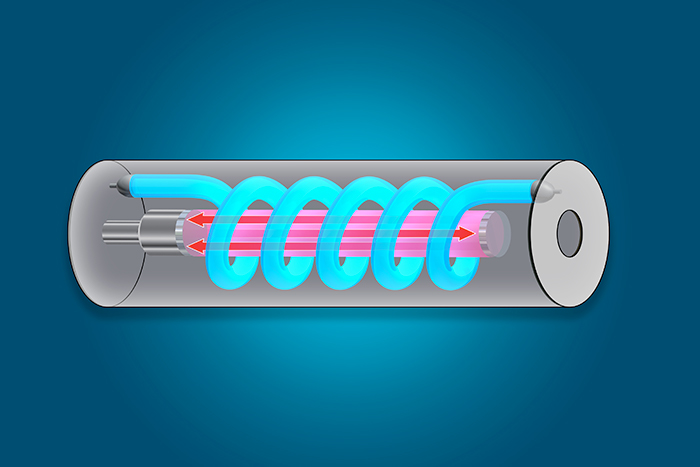 3. The photons strike the atoms, creating more and more photons bouncing back and forth between the mirrors within the rod. 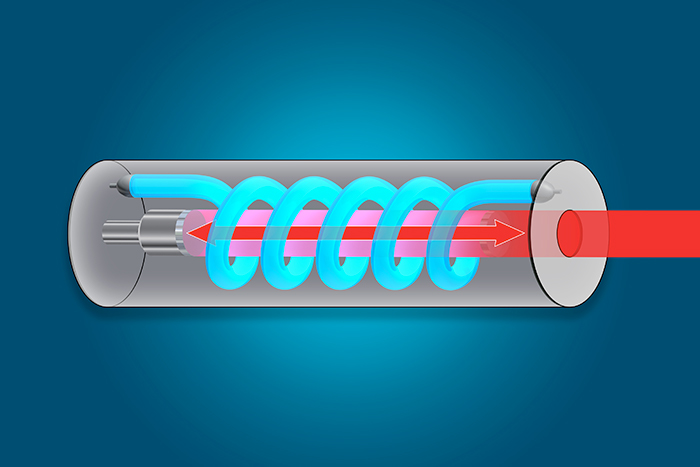 4. The number of photons become so great that they pass through one of the mirrors, which is partially reflective, and the laser beam emerges. Credit: Mark Meamber and John Jett

Lasers have been around since 1960, although the idea goes back to 1900 (see “A Legacy of Lasers and Laser Fusion Pioneers”).

Today, lasers come in many sizes, shapes, colors, and levels of power, and are used for everything from surgery in hospitals, to bar code scanners at the grocery store, and even playing music, movies, and video games at home. You might have undergone LASIK surgery, which corrects your vision by using a tiny laser to reshape the cornea of your eye.

Some lasers, such as ruby lasers, emit short pulses of light. Others, like helium–neon gas lasers or liquid dye lasers, emit light that is continuous. NIF, like the ruby laser, emits pulses of light lasting only billionths of a second. Laser light does not need to be visible. NIF beams start out as invisible infrared light and then pass through special optics that convert them to visible green light and then to invisible, high-energy ultraviolet light for optimum interaction with the target.

Lasers can be tiny constituents of microchips or as immense as NIF, the world’s largest and most energetic laser housed in a building 10 stories high and as wide as three football fields.

Video: Celebrating the 60th Anniversary of the Laser