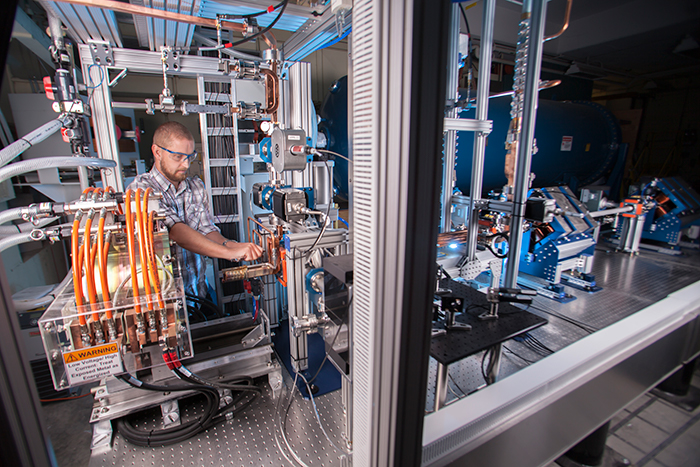 Although PLS manages the facility, three LLNL directorates invested in the new instrumentation (PLS, NIF & Photon Science, and Weapons and Complex Integration), and an even broader sponsor base is currently emerging. “This is a great example of capability development in support of the entire LLNL mission space,” Létant said.

The three accelerators leverage a shared infrastructure, reducing overall construction and operating costs—including existing shielding, safety systems, and a shared control center, which was modified to handle the new equipment.

Updates to the existing space turned these underground “caves” into homes for accelerators that propel charged particles at close to the speed of light.

Laser-Compton photons can be tuned or adjusted to different wavelengths, enabling researchers to detect, image, and assay specific objects of interest, such as nuclear waste canisters, nuclear fuel rods, and other objects that might house uranium or plutonium.

Laser-Compton light sources were initially developed by NIF researchers to serve as a high-energy, mono-energetic light source, producing gamma rays that can penetrate through lead and other thick containers, making them a useful detection tool. In 2008, the team started adapting the technology, using an X-band accelerator that boosts the speed of electrons that collide with laser photons, generating a beam that can be tuned to very precise energy levels. Its mission relevance is evolving as its capabilities expand.

Roark Marsh has been involved throughout the design work for MEGa-ray, leveraging his background in accelerator physics to explore how X-band technology can meet mission-relevant needs. “MEGa-ray is a multi-function accelerator that enables many applications,” Marsh said. “It generates a high-quality, narrow-bandwidth beam that can be used in a range of physics research.”

According to Marsh, several students have helped with experiments aimed at assessing the tool’s full capabilities. For example, one student used the instrument during his thesis work, helping to calibrate hardware used in experiments.

Two decades ago, while performing Monte Carlo simulations of early neutron imaging experiments, physicist Jim Hall envisioned the potential for a more compact neutron imaging capability which would be based on using neutrons from the deuterium–deuterium fusion reaction. With help from a team of experts and years of hard work, that vision is becoming a reality, with the neutron imaging system now in place and its commissioning ready to begin. 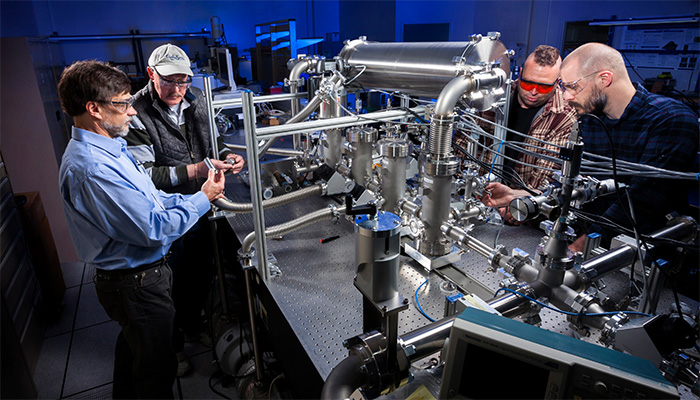 Although the accelerator-driven neutron imaging system may not appear to be “compact,” it is far smaller and less complicated than existing neutron imaging tools at other facilities—systems that are 1 to 2 miles long. LLNL’s more compact technology, where neutrons are made through deuteron bombardment, was developed to advance imaging science and support mission-relevant research at the Laboratory.

With its ability to penetrate thick, dense objects and produce radiographic images of interior features, neutron imaging has the potential to revolutionize stockpile stewardship. And as a next-generation radiographic technique, it also can be used for non-destructive evaluation of large, additively manufactured components.

According to project leader Brian Rusnak, the team also anticipates that the neutron source will enable research advancements in nuclear cross-section measurements, material assay via gamma-ray spectroscopy, and experiments aimed at understanding the effects of radiation on materials and component performance.

“Creating an intense source of fast neutrons is a significant technological undertaking,” Rusnak said. “And we are interested in a wide range of experimental applications for the neutrons that will be produced.”

“Our team is excited to be part of bringing this new technology together and revitalizing LLNL’s accelerator complex,” Rusnak said. “The physics insight of Jim Hall and the program management provided by Bill McLean, combined with long-term programmatic support for the project, led to us to where we are today—on the threshold of a new chapter in non-destructive radiographic imaging.”

At the Lab’s newest electron linear accelerator, scientists are leveraging this world-class capability to study the photonuclear properties of materials. Future applications include interrogating unknown materials, producing isotopes, and analyzing the nuclear properties of materials, including experiments that will support LLNL’s stockpile stewardship and nonproliferation missions.

This powerful tool, known as the Photonuclear Reactions for Isotopic Signature Measurements (PRISM) accelerator, propels electrons into a tungsten plate to generate high-energy x rays, which then interact with the nuclei of interest. Radiation detectors measure the particles generated in the reaction. 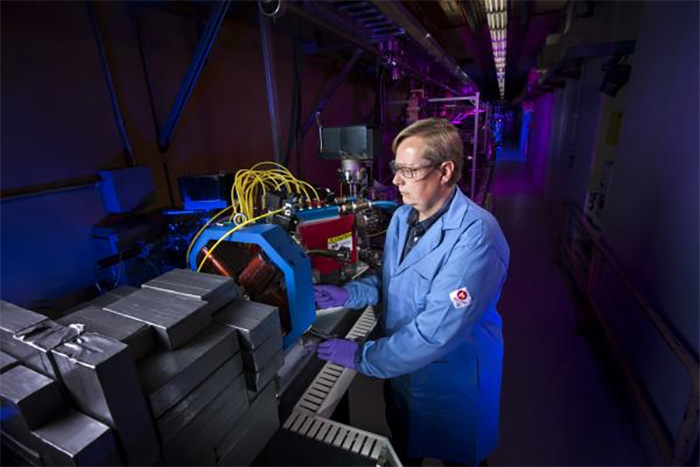 The main portion of the PRISM accelerator was commissioned in May. As a three-year, Laboratory Directed Research and Development Program-funded project wraps up, the research team is expanding the breadth of experimental work enabled by photonuclear measurement capabilities. For example, they recently demonstrated the ability to distinguish different isotopes of uranium using delayed-neutron signatures.

“We anticipate that PRISM will be used in a wide range of experiments in the years ahead,” said physicist Robert Casperson, who looks forward to exploring how PRISM can be used to study neutron-induced reactions.

“The combination of a local, photofission-based neutron source, along with unique materials stored on site at the Lab, will enable experiments aimed at understanding neutron scattering,” Casperson added.

PRISM is a flexible tool. It is designed to accelerate electrons up to 55 million electron-volts. By tuning the accelerator to low-electron energy, however, it also can be used to study radiation effects, support radiochemistry research, or better understand medical isotope production. By scanning across a range of energies, photonuclear cross-sections can be determined, allowing the inference of neutron reactions on unstable nuclei.

For the better part of a decade, inertial confinement fusion (ICF) researchers have been intrigued with the possibility that surrounding an ICF target with a powerful magnetic field could improve NIF’s implosion performance.

The idea has been tested, with promising results, in simulations and experiments at NIF and other facilities. Now LLNL researchers and their colleagues have been awarded a strategic initiative (SI) project to demonstrate the key elements of magnetically assisted ignition at NIF. The project is funded by the Laboratory Directed Research & Development (LDRD) program.

Conceptual diagram of a NIF hohlraum fitted with a B-field (magnetic-field) coil.

An international research team led by physicist John Moody is preparing to conduct an experimental campaign that will begin with an implosion experiment that uses a target capsule filled with cryogenic deuterium-tritium (DT) fuel.

“This experiment looks similar to an implosion we did previously on NIF that performed well,” Moody said. In the next step, “we add a coil of copper wire, known as the B-field (magnetic-field) coil, wrapped around the exterior of the hohlraum,” he said. “When the wire is energized by the NIF B-field pulser system it magnetizes the hohlraum and capsule.”

Moody describes the function of the coil around the hohlraum as helping to create a more effective implosion platform on NIF. “As soon as it is energized, current starts to flow in the coil,” he said. “This generates eddy currents in the hohlraum which slow the speed at which the field passes through the hohlraum wall. Eventually, the field fills the hohlraum and capsule.

“The starting B-field is called the seed field,” Moody added. “The implosion dramatically amplifies this seed field to the point where it can confine electrons and alpha particles generated in DT (deuterium-tritium) reactions. These two effects push the system closer to the self-heating regime.”

In an ICF experiment, the energy of NIF’s 192 lasers is focused on the interior walls of the hohlraum, generating x rays that drive the implosion of the target capsule filled with cryogenic DT fuel. When the implosion reaches its smallest size, the deuterium and tritium atoms in the hot-spot fuse and release alpha particles (helium nuclei) which deposit some of their energy in the surrounding cold fuel, stimulating additional fusion reactions through a process called alpha heating.

“But the hot-spot also loses energy through electron conduction and radiation,” Moody noted. “If we could better contain the electron heat and alpha-particle energy, this could lead to a self-sustaining ‘burning plasma’ and eventually, as other issues are resolved, to fusion ignition”—when a self-sustaining thermonuclear reaction releases more energy than the amount of energy absorbed by the target.

“When you apply the magnetic field,” Moody said, “the alpha particles remain longer in the hot-spot and the electron cooling decreases, making the hot-spot hotter, pushing the system closer to the self-heating regime, and bringing current ICF experiments closer to ignition. This is the advantage of using a B-field.”

Moody also expects that magnetically assisted ignition will significantly improve a target capsule’s performance with little or no change in the hohlraum’s behavior.

Beginning next summer, Moody’s SI team will begin a series of three laser shots on a room temperature hohlraum with a gas-filled capsule in a process to study the key elements for magnetized ignition. 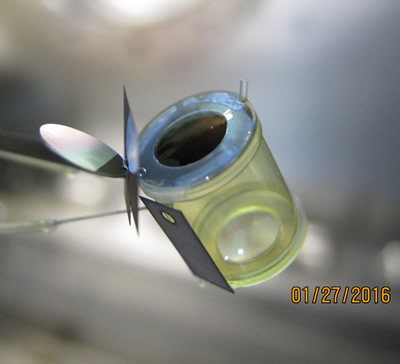 LLNL researchers, in collaboration with Sandia National Laboratories, have conducted a series of experiments designed to lay the groundwork for a magnetized ignition campaign on NIF over the last four years. The room-temperature “gas-pipe” target in the photo studied the propagation of a NIF quad (four beams) in a 10-millimeter-long epoxy pipe filled with one atmosphere of neo-pentane gas.

The project’s goals are to demonstrate:

After inducing a 30-Tesla seed field in the target capsule, Moody said, “we then will turn on the laser, and the resulting implosion traps the field in the capsule and amplifies it more than 200 times. This traps a lot of the heat from the electrons—which are usually very thermally conductive—in the hot-spot.

Along with the promise of improving NIF ICF implosions, magnetized targets also are generating interest for HED and astrophysics experiments. Several current NIF Discovery Science campaigns are studying astrophysical magnetic fields to determine their origins, how they evolve, and their role in other cosmic phenomena (see “Probing the Mysteries of Cosmic Magnetic Fields”).

To support the SI campaign, members of the NIF Target Fabrication Team and their partners at General Atomics have developed a number of specialized targets and target materials, ranging from solenoid-wrapped gas-filled pipes designed to measure debris and shrapnel to alloys for possible use in hohlraums with low electrical conductivity. 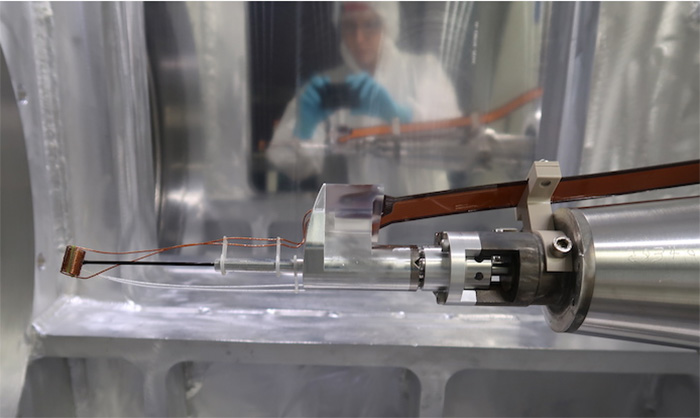 A coil-wrapped gas-pipe target installed at the end of a NIF diagnostic instrument manipulator. Wrapping the coil around the gas-pipe presented a number of assembly challenges.

Moody expressed cautious optimism about the outcome of the team’s SI experimental campaign, based in part on previous magnetized liner inertial fusion (MagLIF) studies at the Z Machine at Sandia National Laboratories and the Omega Laser Facility at the University of Rochester, as well as hydrodynamic simulations of NIF target capsules with initial imposed magnetic fields of up to 70 Tesla.

However, Moody said, the new campaign “isn’t the silver bullet to achieving self-heating. We could be surprised by an alternative set of physics resulting during this process. Plasmas are very good at avoiding being confined and dissipating their heat.

“As soon as you start bottling up the high-density and high temperature chunk of stuff, everything in physics tells you conditions will not continue to remain stable,” he said. “It’s like trying to contain and prolong an explosion—it’s unstable by definition. When we apply the B-field to our hohlraums, I’m sure we’ll encounter something other than what we expect; that’s an element of this work that makes it so interesting and challenging.”

Other Approaches to Self-Heating

Moody’s team also intends to explore other approaches to achieving self-heating. “We may find that a magnetic field used in combination with another hohlraum configuration will be more successful,” he said. “Or, we might find that a much higher seed field is needed.” For example, an approach being pursued by LLNL physicist Brad Pollock and his team uses lasers to generate high magnetic fields (see “Laser-Driven Magnetic Fields Could Boost NIF Implosions”).

Developing a magnetized implosion platform on NIF makes it possible to explore high-field science more thoroughly in the near future. “The project plan includes possible early offramps to the program, depending on our progress,” Moody said.