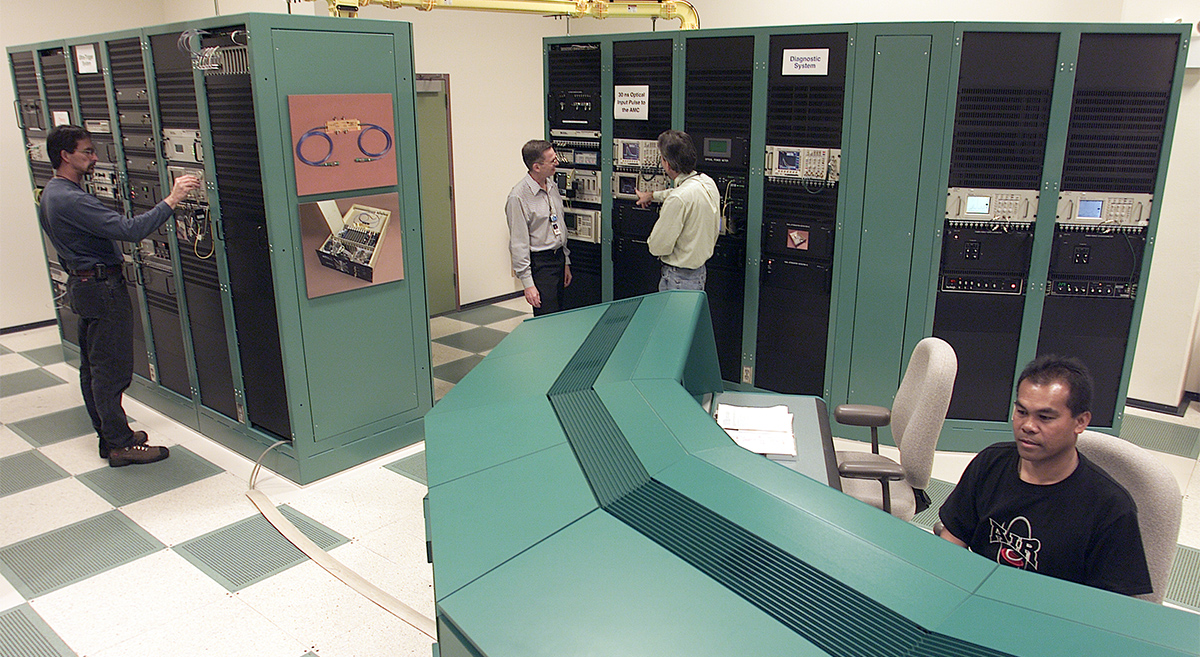 NIF’s laser beams are born in the Master Oscillator Room. A compact laser oscillator generates low-energy (a few nanojoules) laser pulses which are shaped in time and frequency-broadened to help smooth the intensity of the laser beam when it is ultimately focused on the target.

NIF’s injection laser system (ILS) plays a key role in meeting these three requirements. The ILS system is responsible for generating a prescribed temporal and spatial pulse shape, adjusting the energy in each of the 192 beams, and adjusting the time when the beams hit the target. The ILS consists of the Master Oscillator Room (MOR), the preamplifier module (PAM), the input sensor package (ISP), and the preamplifier beam transport system (PABTS). NIF has one master oscillator, 48 PAMs and ISPs, and 24 PABTSs. 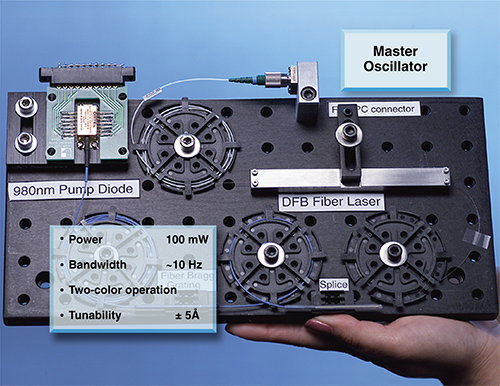 NIF laser pulses are generated in the MOR from an optical fiber laser. This laser generates pulses of just a few nanojoules (billionths of a joule) with a beam diameter of a few micrometers. There are four individual oscillators, one for each cone of beams on the target. Each oscillator’s frequency can be individually adjusted.

The pulse is then split and amplified using fiber splitters and fiber amplifiers similar to those used in the telecommunications industry. After several stages of splitting and amplification, 48 individual pulses are generated. Each pulse is then shaped in time and timed per the experimental requirements and transported to each of the 48 PAMs for further amplification and spatial beam shaping.

The PAM contains two different amplification stages. The first amplifies the pulse energy from about 750 picojoules (trillionths of a joule) to about 15 millijoules (thousandths of a joule), a factor of 20 million. The second stage amplifies the shaped beam by a factor of up to 10,000. The output energy of the PAM can be varied from about 10 millijoules to about 10 joules. In between the two amplifiers the shape of the beam is converted from the typical round laser profile to a precise square-shaped beam to better fill the large laser amplifier aperture.

The ISP performs three functions: aligning the PAM, generating a pilot beam to align the main laser optical system, and measuring the PAM output energy, beam profile, and pulse shape. Because there are no other energy adjustment devices in the main laser chain, the PAM energy must be precisely adjusted so that each beam on the ignition target has the requested energy. A fast photodiode measures the pulse shape in time to ensure that the pulses have the proper shape.

The beams produced by the two PAMs are each split into four beams in the PABTS system using a series of beam splitters (each beam is split in two and then the two beams are each split into two again). The PABTS can adjust the split ratio—the percentage of light into each of the four beams. In addition, the PABTS contains a series of mirrors for each beam that can be moved to change the distance each beam propagates in the PABTS. This is used to make sure each beam of a quad arrives at precisely the same time on the target. The timing of the quad is adjusted in the MOR.