In support of NIF’s stockpile stewardship mission, the laser system’s unique capabilities are creating unprecedented opportunities for research in the growing field of high energy density (HED) science—the study of matter under extreme states of density and pressure (about 1 Mbar to 1 Gbar, or one million to one billion times the atmospheric pressure at Earth’s surface).

NIF can generate conditions similar to those occurring in giant planets and white dwarf stars, in the fusion reactions that power the sun and other stars, and in exploding nuclear weapons.

HED research is opening new frontiers in materials science research. Researchers have developed new capabilities for measuring the basic properties of matter, such as the equation of state (EOS) at the highest pressures ever achieved in a controlled laboratory experiment.

NIF experiments are highly diagnosed to provide unprecedented insights into HED systems, and are complemented by other experimental facilities at LLNL and elsewhere.

Learning from the Stars

By recreating the properties of celestial objects under scaled conditions in the laboratory, NIF enables scientists to explore extreme conditions such as the hot dense plasmas found in stars (see Discovery Science). LLNL researchers have long been interested in the physical processes of stars because the prime stellar energy mechanism, thermonuclear burn, is central to the Laboratory’s core mission of maintaining the safety, security, and reliability of the nation’s nuclear weapons stockpile. 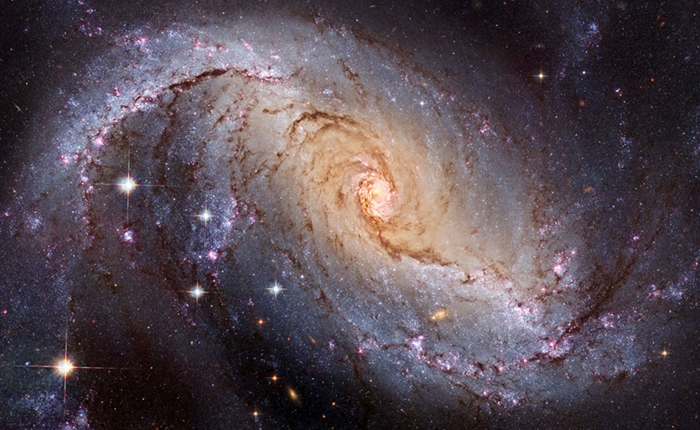 Image of the spiral galaxy NGC 1672 captured by the Hubble Space Telescope. NGC 1672, which spans about 75,000 light years across, is being studied to learn more about star formation in a galaxy’s central regions. Credit: Hubble Legacy Archive, NASA, ESA (Click to expand.)

NIF’s HED science program provides experimental data that yields important information on the characteristics of materials used in nuclear weapons as they age or are subjected to the immense pressures and temperatures of a thermonuclear explosion (see NIF and Stockpile Stewardship).

“From microjoules to megajoules and kilobars to gigabars: Probing matter at extreme states of deformation,” Physics of Plasmas, September 17, 2015