The experiments were a continuation of the first SGEMP campaign performed last year. In those shots, the NIF laser created 7-keV (thousand-electron-volt) x-ray sources that drove electromagnetic current pulses similar to those generated at Sandia’s Z pulsed power facility in Albuquerque, New Mexico. About 500 kilojoules of ultraviolet laser energy produced the x-ray sources that created electromagnetic responses in various test objects mounted on two NIF diagnostic instrument manipulators (DIMs). Some of the test objects shared the target chamber vacuum, while others were filled with gas. 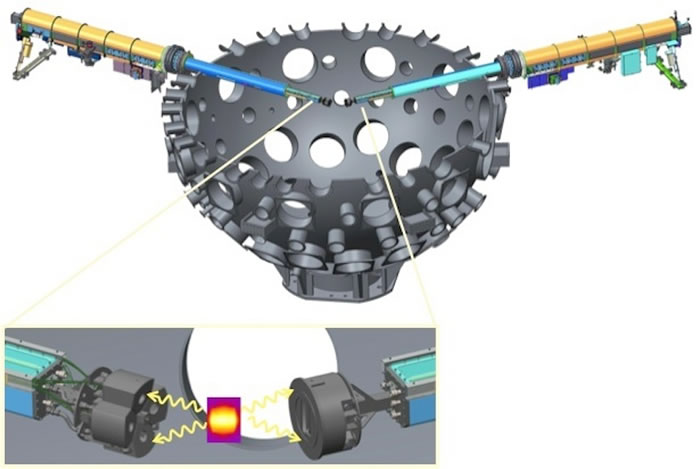 Configuration of the two diagnostic instrument manipulators for the first SGEMP experiments, showing the test objects mounted on the equatorial DIMs being driven by the x-ray emission from the target.

Five separate experiments contained in the SGEMP diagnostics cassettes spanned a range of conditions important to code validation. Local x-ray environments were diagnosed by calorimeters built into the cassettes, and NIF facility diagnostics provided additional details about the x-ray output from the laser-driven target. The SGEMP team staged a large amount of diagnostic and data acquisition equipment in the Target Bay for the tests. Excellent SGEMP data were recorded in both experiments, and the gas-fill system and in-situ calorimeters performed excellently. Small changes in the diagnostics between the first and second shots greatly improved facility diagnostic data quality. 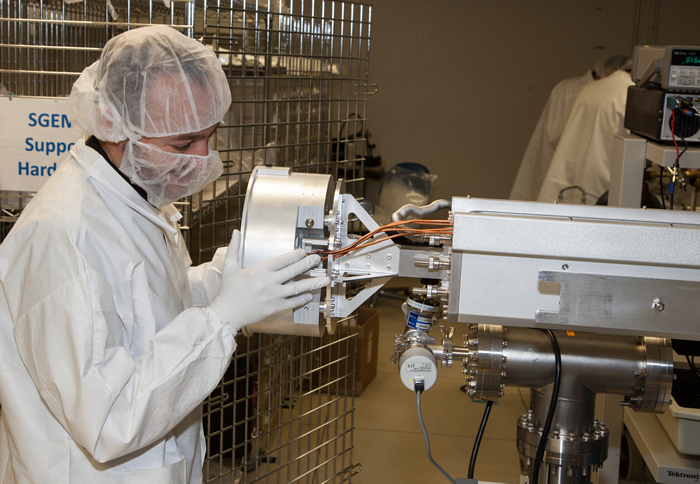 A member of the SGEMP Team installs a sample cassette on the SGEMP diagnostic system for deployment in a diagnostic instrument manipulator. These experiments use the powerful x-ray pulse generated in a custom-designed x-ray source target to create EMP effects in test objects.

The recent SEGEMP campaign used new x-ray sources at higher photon energies to get data from a unique x-ray environment. Experience gained in the first campaign enabled the team to optimize set-up of diagnostic and data acquisition systems as well as transactions between the shots. The x-ray sources for the recent tests included the 7-keV source as well as a 13-keV x-ray source created by a plasma formed from a krypton gas target with a unique x-ray spectrum to drive test-article effects. Both the 7-keV and 13-keV x-ray sources were developed and qualified in a series of dedicated shots in previous years. Two upcoming SGEMP shots using stainless steel instead of krypton gas will have 50 percent more laser power and significantly enhanced x-ray flux compared to the earlier shots. 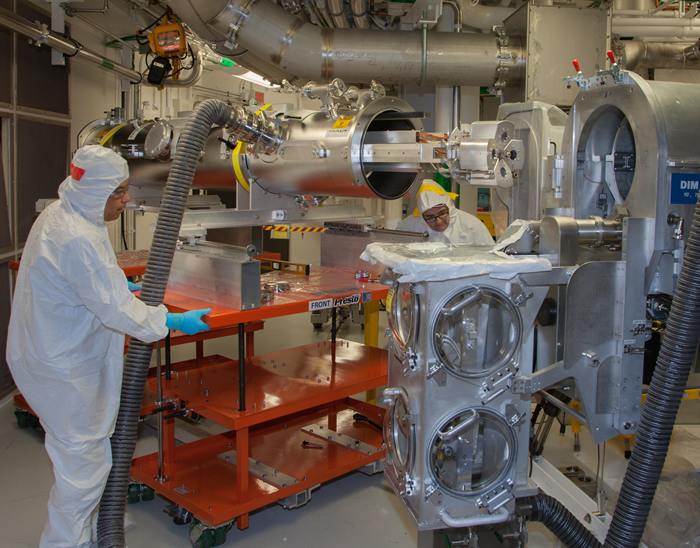 “The known output from the x-ray sources allows SGEMP modelers and designers to develop precise experiments to isolate the physical phenomena of interest to their code validation program,” said LLNL Program Manager Kevin Fournier. “The team is looking ahead to the next set of trials this year that will use the 13-keV source again, but potentially with more than one megajoule of laser drive energy, as well as a new x-ray source with even higher x-ray energies.”

NIF received 51 initial expressions of interest from national and international scientists from the academic, national laboratory, and private sectors. The 42 full proposals were reviewed by a Technical Review Committee (TRC) which met at the Laboratory Nov. 10-12. The TRC advised NIF on the relative scientific merit of the proposals.

“We anticipate 18 NIF days will be allocated to Discovery Science in Fiscal Year 2016 and similar yearly allocations going forward,” said Bruce Remington, program leader for NIF Discovery Science. “Each new experiment will receive about three days of facility time. Typically, one to three shots can be executed per shot day, depending on shot complexity.” 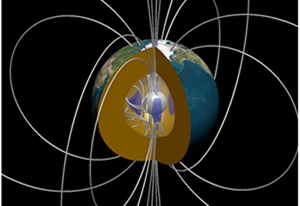 Among the selected experiments are several which will subject materials to intense pressures, such as those in the interiors of stars and giant planets, that only NIF is capable of producing. The experiments will enable researchers to quantify the change in the materials’ crystal structure as a function of applied pressure, providing clues to planet formation and structure as well as to the exotic behavior of materials at high densities (see Experimental Highlights, December 2014). Other experiments will examine collisionless shocks and the generation and amplification of planetary and astrophysical magnetic fields (see Science & Technology, July 2014); NIF is the only facility that can create the proper plasma conditions to generate fully formed astrophysical collisionless shocks and strong magnetic field amplification by a turbulent dynamo process. Stellar and Big Bang nucleosynthesis, the evolution of hydrodynamic instabilities, and the development of a long-duration planar direct-drive NIF platform also will be studied.

The selected proposals are: 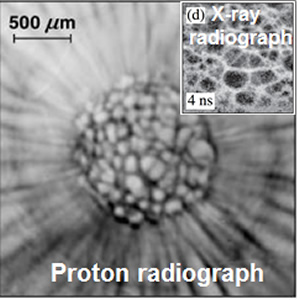 Radiographs from a direct-drive hydrodynamics experiment