LLNL scientists are part of a new National Science Foundation center to probe the properties of atoms under the extreme pressures found in stars, giant planets like Jupiter and super-Earths. Credit: Brian Chavez (Click to expand graphic.)

The Center for Matter at Atomic Pressures (CMAP) is hosted by the University of Rochester in collaboration with researchers from LLNL’s Joint High Energy Density Science (JHEDS) organization, a joint venture between the Physical and Life Sciences and National Ignition Facility & Photon Science directorates.

Researchers from MIT, Princeton, UC Berkeley, UC Davis, and the University of Buffalo are also collaborating with the CMAP, a new NSF Physics Frontier Center (PFC) funded by the NSF to enable transformational advances in the most promising research areas.

While past efforts have aimed at exploring pressures approaching those found in the Earth’s core, CMAP seeks to characterize the properties of matter under the uncharted and extreme conditions of most of the known matter in the universe. Those properties control the evolution of planets and stars but had been inaccessible to experiments and theoretical techniques until recent scientific advancements at facilities like NIF, the world’s largest and highest-energy laser.

“This is the first NSF center aiming beyond the Earth’s center and into the interiors of giant planets, super-Earths, and (other) exoplanets,” said LLNL physicist Jon Eggert, leader of the Dynamic Materials Properties group. “CMAP will open a whole new field of HED science to academic research.”

Eggert and fellow LLNL physicists Peter Celliers and Rick Kraus are among the senior investigators for CMAP. The principal investigator is University of Rochester professor Gilbert “Rip” Collins, a former LLNL researcher.

“This is the first major initiative from NSF in the field of high energy density science,” said Collins, Tracy/Hyde Professor of Mechanical Engineering and Physics and Astronomy and associate director of science, technology, and academics at Rochester’s Laboratory for Laser Energetics. “This effort will help discover the nature of planets and stars throughout the universe, as well as the potential for new revolutionary states of matter here on Earth.”

Under a five-year cooperative agreement, the NSF is providing $12.96 million in funding to the university-based centers for CMAP. LLNL will not receive NSF funding, but CMAP will provide the Lab with key opportunities to further collaborate with the HED physics academic community.

CMAP plans to exploit the capabilities of a new generation of laser, pulsed-power, and x-ray-beam facilities to explore the properties of matter at and beyond 29 terapascals (TPa), the atomic unit of pressure already achievable at NIF (1 TPa is equal to 10 million Earth atmospheres).

NIF’s 192 laser beams can create temperatures and pressures similar to those that exist in the cores of stars and planets and inside nuclear weapons. NIF research supports the National Nuclear Security Administration (NNSA)’s Stockpile Stewardship Program to ensure the safety and reliability of the nation’s nuclear weapons without full-scale testing.

“Atomic pressure, defined by the pressure needed to contain a hydrogen atom’s energy within its atomic volume—without electrodynamic forces—dramatically reshapes the internal structure of atoms, the fundamental building blocks of all materials,” said Eggert.

Many of CMAP’s broad team of researchers have taken part in NIF’s Discovery Science campaigns that explore new areas of basic science, including co-principal investigators Raymond Jeanloz of UC Berkeley and Sarah Stewart of UC Davis and senior investigator Tom Duffy of Princeton. They join other experts in plasma, atomic, and condensed-matter physics who will try to better understand the origin, evolution, and nature of thousands of recently discovered planets. 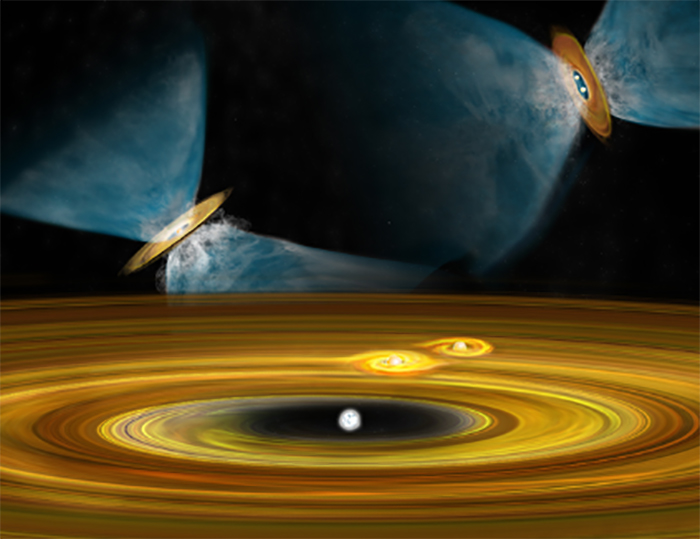 The new Center for Matter at Atomic Pressures will explore the kinds of pressures required to understand the evolution of stars and planets, a process illustrated in this artist’s conception of a pair of young, still-forming stars. Credit: National Science Foundation

The center will lead to discoveries at the confluence of two movements in science: the discovery of thousands of potential life-sustaining planets outside our solar system, and, as Collins noted, the recent “paradigm shift in how we think about extreme states of matter.” Scientists previously believed, for example, that materials subjected to very-high and atomic-scale pressures would transition to simple densely packed metals.

“However, recent theoretical and experimental results now suggest such extreme matter can become increasingly more complicated, with extraordinarily exotic properties,” Collins said. Aluminum, for example, may transform from a simple metal to a transparent insulator, and hydrogen from a gas into a superconducting superfluid (see “NIF Reveals How Hydrogen Becomes Metallic in Giant Planets”).

The center will concentrate on four main areas of fundamental research:

University of Rochester Center for Matter at Atomic Pressures