Using the power of the National Ignition Facility, the world’s highest-energy laser system, researchers at LLNL and an international team of collaborators have developed an experimental capability for measuring the basic properties of matter, such as the equation of state (EOS), at the highest pressures thus far achieved in a controlled laboratory experiment. 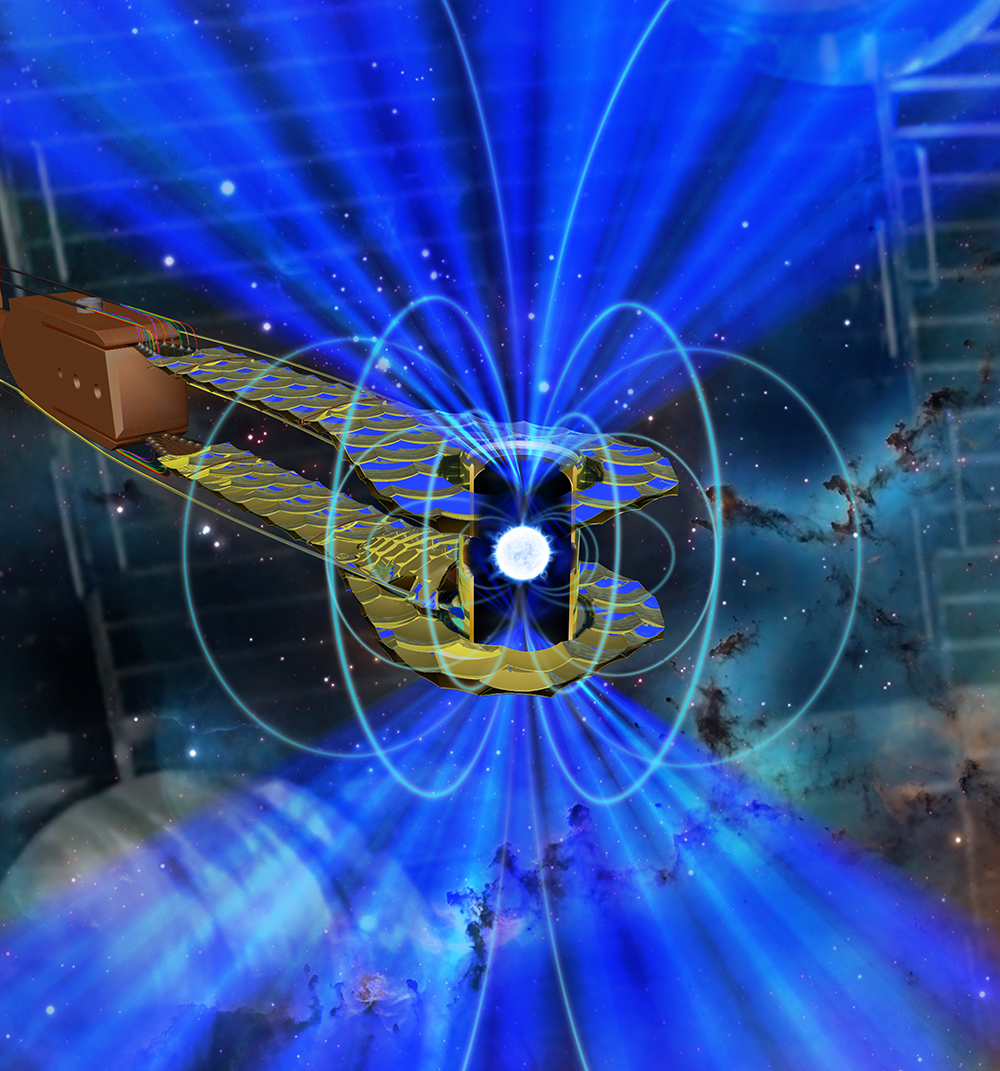 Composite image of a white dwarf star inside a NIF hohlraum. A white dwarf with the mass of the sun would be about the size of planet Earth, making it one of densest objects in space after neutron stars and black holes. Credit: Mark Meamber and Clayton Dahlen (Click to expand.)

The results are relevant to the conditions in the cores of giant planets, the interiors of brown dwarfs (failed stars), the carbon envelopes of white dwarf stars, and many applied science programs at LLNL.

The studies were reported in an article in the August 5 issue of the journal Nature.

According to the authors, the overlap with white dwarf envelopes is particularly significant: the new research enables experimental benchmarks of the basic properties of matter in this regime. The results should ultimately lead to improved models of white dwarfs, which represent the final stage of evolution for most stars in the universe.

After billions of years, the sun and other medium- and low-mass stars will undergo a sequence of expansions and contractions that results in the formation of white dwarfs—the fate of stars that have exhausted their nuclear fuel and collapsed into hot, super-dense mixtures of carbon and oxygen.

In an effort to resolve disagreements in EOS models at extreme pressures that are relevant to white dwarf stars and various laboratory research projects, scientists conducted the first laboratory studies of matter at the conditions in the outer carbon layer of an unusual class of white dwarf called a “hot DQ.” 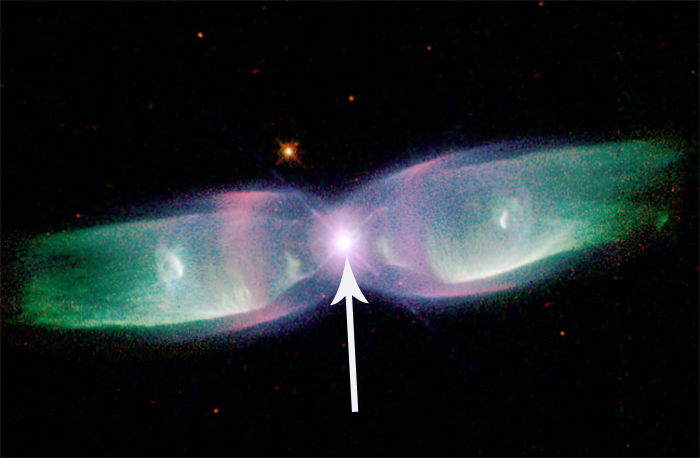 A 2005 image of the star M2-9, 2,100 light-years from Earth, as it shrinks into a white dwarf (the bright white spot at the center) and casts off its outer gaseous envelopes to form what’s known as a planetary nebula (the extended pink and green regions). Because of its intense gravity, a 150-pound person on Earth would weigh 50 million pounds on the surface of a white dwarf. Credit: B. Balick, University of Washington et al., WFPC2, HST, NASA (Click to expand.)

The researchers subjected solid hydrocarbon samples to pressures ranging from 100 to 450 megabars (100 to 450 million times Earth’s atmospheric pressure) to determine the EOS—the relationship between pressure and compression—in the convection layer of a hot DQ. These were the highest pressures ever achieved in laboratory EOS measurements.

“NIF can duplicate conditions ranging from the cores of planets and brown dwarfs to those in the center of the sun,” Kritcher added. “We’re also able in NIF experiments to deduce the opacity along the shock Hugoniot (the Hugoniot curve is a plot of the increase in a material’s pressure and density under strong shock compression). This is a necessary component in studies of stellar structure and evolution.”

Hot DQs have atmospheres primarily composed of carbon—instead of hydrogen and helium as in most white dwarfs—and are unusually hot and bright. Some also pulsate as they rotate because of magnetic spots on their surface, providing observable variations in brightness. Analyzing these variations “provides stringent tests of white dwarf models and a detailed picture of the outcome of the late stages of stellar evolution,” the researchers said.

They added, however, that current EOS models relevant to white dwarf envelopes at pressures in the hundreds of millions of atmospheres can vary by nearly 10 percent, “a significant uncertainty for stellar evolution models.” Previous researchers have called this the “weakest link in the constitutive physics” that inform white dwarf modeling, Kritcher said.

The NIF research could help resolve the differences by providing the first EOS data that reach conditions deep in the convection zone of a hot DQ—the region where models show the greatest variability. Results of the experiments agree with EOS models that recognize the extent to which extreme pressures can strip inner-shell electrons from their carbon atoms, decreasing the opacity and increasing the compressibility of the resulting ionized plasma.

“White dwarfs are like cosmic clocks that can help us determine the age of galaxies,” said co-author Siegfried Glenzer, director of the High Energy Density Division at SLAC National Accelerator Laboratory, who was involved in the early proposal for this research. “For the first time,” he said, “we’re able to take data at extreme conditions not accessible in the lab until now. By combining our expertise in various fields, we can construct equation-of-state models that agree with the data. It narrows down the models used to describe how these stars behave, opening up a whole new area of work that has to be done.”

NASA’s Hubble Space Telescope captured this field of white dwarfs, which appear as points of light scattered among bright active stars (the white arrows point to two typical white dwarfs). These ancient remnants of stars are 12 to 13 billion years old, only slightly younger than the universe. Theory predicts that white dwarfs will eventually cool down and become black dwarfs. Credit: ©NASA and H. Richer, University of British Columbia (Click to expand.)

The EOS research is an outgrowth of the NIF Discovery Science “Gbar” (gigabar, or one billion atmospheres) Campaign initiated by Roger Falcone and his students and postdocs at the University of California, Berkeley, other NIF academic users, and early career scientists from LLNL. It was supported by the LLNL Laboratory Directed Research and Development Program, the University of California Office of the President, the National Nuclear Security Administration, and the Department of Energy Office of Science.

“The NIF Discovery Science Program enabled our diverse team of researchers—from universities, national labs, and industry—to work together on a long-term effort to fundamentally understand the behavior of matter under the most extreme pressures and temperatures,” Falcone said. “NIF is the only facility in the world capable of creating and probing those conditions, and its expert support teams were key to our success. This paper highlights the strength of that collaboration, and is evidence for how basic research can find applications in many fields, including astrophysics.”

In the EOS experiments, NIF’s lasers delivered 1.1 million joules of ultraviolet light to the inside of a pencil-eraser-size hollow gold cylinder called a hohlraum, creating a uniform x-ray “bath” with a peak radiation temperature of nearly 3.5 million degrees. The x rays were absorbed by a solid plastic sphere mounted in the center of the hohlraum.

The plastic was heated and ablated, or blown off like rocket exhaust, by the x rays, creating ablation pressure that launched converging shock waves at 150 to 220 kilometers a second toward the center of the target capsule. The shocks coalesced into a single stronger shock that reached pressures approaching a billion times Earth’s atmosphere. 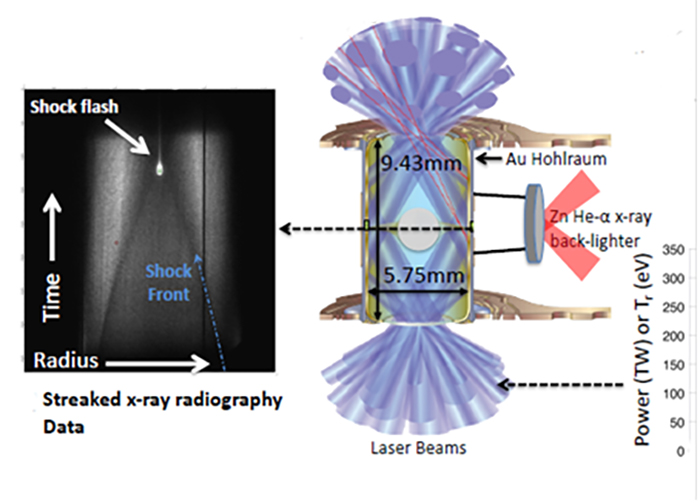 The EOS experimental configuration. A schematic of the target (right) shows the laser beams striking the inside of a hollow gold cylinder (the hohlraum), generating an x-ray-filled cavity that compresses the solid spherical target inside the hohlraum. The zinc foil x-ray backlighter to the right of the hohlraum generates the bright x-ray illumination used in the streaked x-ray radiography data (left), showing the shock front and the self-emission shock flash at the target’s core upon shock convergence. (Click to expand.)

“We measured a reduction in opacity at high pressures, which is associated with a significant ionization of the carbon inner shell,” Kritcher said. “This pressure range along the Hugoniot corresponds to the conditions in the carbon envelope of white dwarf stars. Our data agree with equation-of-state models that include the detailed electronic shell structure.”

Those models “show a sharper bend in the Hugoniot and higher maximum compression than models that lack electronic shells,” she said, suggesting a “softening” of the EOS. This leads to increased compression resulting from this “pressure ionization.”

The experimental data can contribute to better models of pulsating hot DQ stars and a more accurate determination of their internal structures, pulsation properties, spectral evolution, and complex origin, the researchers concluded.