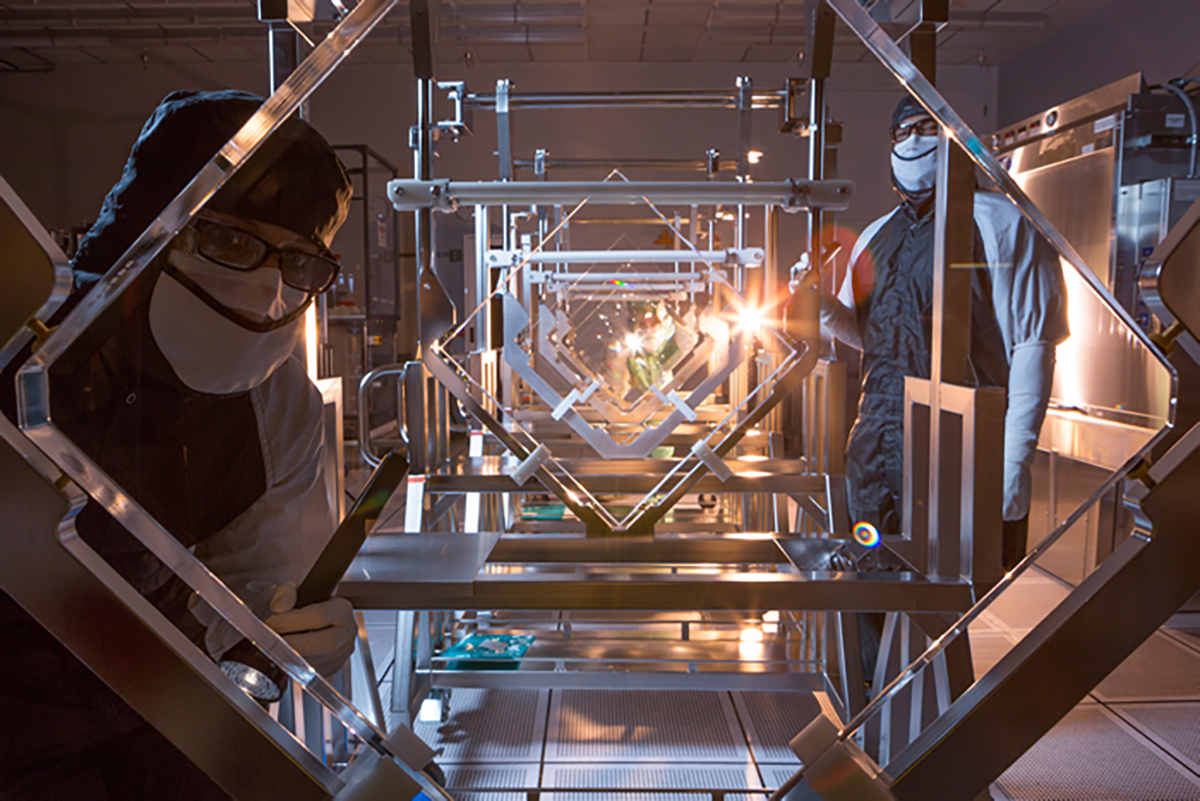 Advancing the Boundaries of Optical Science

Technicians repair damage sites on NIF final optics in the Optics Mitigation Facility so they can be returned to service. NIF’s high-quality and high-performance optics make it possible for the laser to operate reliably, at record levels of power and energy, and at a high shot rate.

“All these things that we’ve learned—the fundamental chemistry, physics, mechanics, tribology (friction, lubrication, and wear), and colloidal chemistry—end up not only aiding in making more damage-resistance optics, but also help in improving optical performance.”

A remarkable number of optical components—more than 7,500 meter-sized optics and 26,000 smaller ones—combine to make NIF the largest optical instrument in the world. Thousands of lenses, mirrors, amplifier slabs, and other optics are essential elements of the elaborate process that directs, transforms, and focuses the initial single, ultra-low-energy laser pulse from the NIF master oscillator into the 192 high-energy laser beams that enter the Target Chamber.

In many cases, new technologies were required to produce these optics in the numbers required for NIF (see “The Seven Wonders of NIF”). Of NIF’s Seven Wonders, three involve the transmission of the laser beams through the beamlines and into the Target Chamber: the rapid growth of potassium dihydrogen phosphate (KDP) crystals used in NIF’s beamlines, the optical switch called a plasma electrode Pockels cell (PEPC) that enables the laser beams to gather energy by making multiple passes through the amplifiers, and deformable mirrors that precisely adjust the shape of the beams. 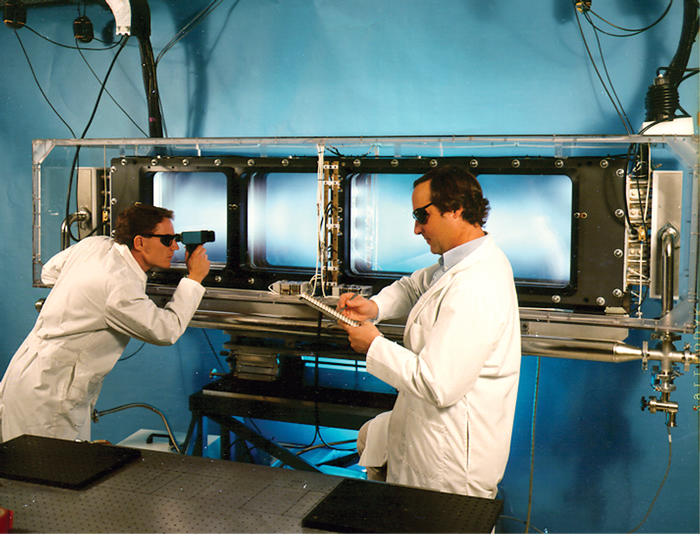 Scott Fochs (left) and Mark Rhodes inspect a bank of plasma electrode Pockels cells (PEPCs) made from KDP crystals that will control the back-and-forth path of four laser beams through the main amplifier.

Partnerships with optics vendors and suppliers were vital to achieving the scale and quality NIF demanded. And today, these partnerships help the NIF Team continually advance the boundaries in optical science.

New methods of fabricating, grinding, and polishing were required to produce optics that could withstand NIF’s extremes of energy and power. Other optics developments that have helped enable NIF to steadily increase its shot rate and beam energy and power over the last 10 years include forensic approaches that investigate damaging stray light and debris particles; and advancements in surface coatings, such as highly reflective, multilayer dielectric coatings applied to beam-steering mirrors, and anti-reflective coatings designed to overcome energy-robbing reflections from the rear surface of the facility’s grating debris shields. 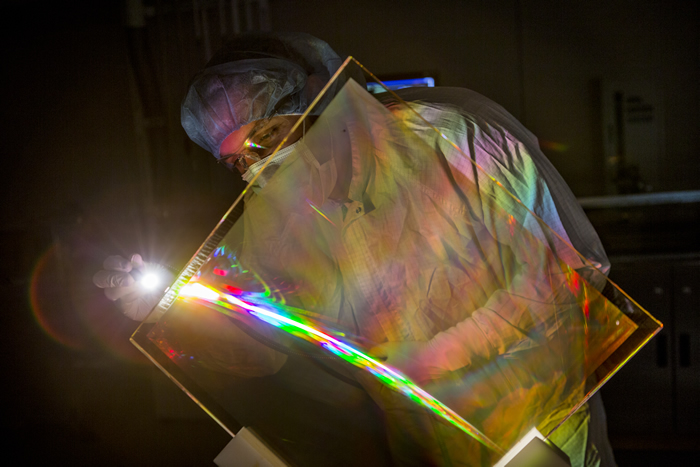 Especially important was the development of a patented chemical process called the Advanced Mitigation Process, or AMP. AMP protects the optics by making their surfaces more damage-resistant by removing impurities and absorbing microfractures. When exposed to laser light, these imperfections create tiny damage craters on the surface which grow with repeated laser shots and limit the lifespan of the optic. Both the AMP process and the coatings are required to realize reductions to the damage rate and the possibility of higher energy on NIF.

The technologies are a result of sustained research and development over the past decade, much of it supported by LLNL’s Laboratory Directed Research and Development (LDRD) Program. This effort involved forming a fundamental understanding of the chemistry and physics involved—including isolating and identifying nanoscale absorbing precursors leading to laser damage, understanding the complex laser-matter-interaction physics, and developing novel chemical processes to mitigate them. 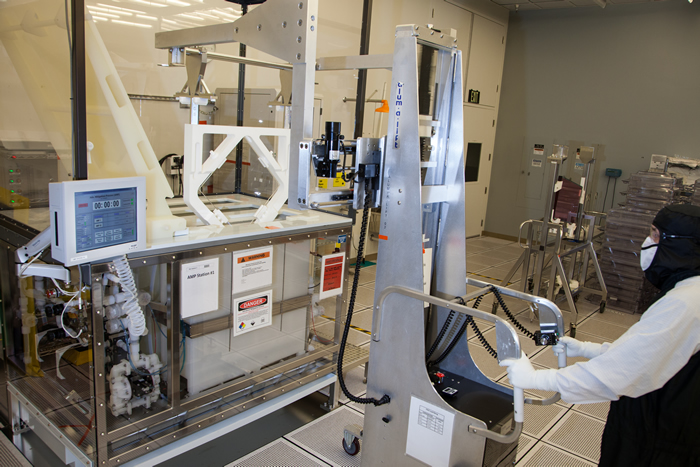 Mounted in a chemically resistant case, an optic is lowered by a technician into an apparatus for the Advanced Mitigation Process (AMP) containing hydrofluoric acid in a mixture called buffered oxide etch (BOE). Small defects that could potentially grow into large damage sites are removed by the BOE dissolving away a thin surface layer of the optic.

“Maximizing the amount of energy and shots reaching NIF targets is a critical factor in the facility’’s efforts to serve the needs of its users and Laboratory missions,” says Tayyab Suratwala, program director for Optics and Materials Science and Technology (OMST). “By minimizing the damage rate to NIF’s optics, we can save considerable time and expense involved in recycling or replacing optics that become unusable, and thereby increase the number of shots available to experimenters.”

“The key to making the Loop strategy work is to keep the likelihood of damage initiation as low as possible and control growth when damage initiation occurs by on-site mitigation. In this way we can accommodate easy exchange of an optic containing a growing (damage) site with a near-perfect replacement optic and significantly reduce annual cost of operations for ultraviolet lenses.”

When damage does occur, the optics must be removed from service so that damage sites can be locally repaired through a process known as the “NIF Optics Recycle Loop.” The Loop is designed to assure that NIF economically operates at maximum energy by limiting the likelihood of damage and acting quickly to mitigate further damage when it does occur.

By improving the science and using system engineering, the Optics Recycle Loop enabled NIF to surpass its design energy and power specifications. The Loop tracks optics damage and predicts when optics need replacement before laser performance is affected. Optics are then repaired and reintroduced into the beamlines.

This breakthrough was driven by Mary Spaeth, a laser and optics pioneer who led the systems engineering effort for NIF’s construction and commissioning and later served as chief technology officer. The Loop strategy has helped improve NIF’s efficiency, allowing it to operate at about 400 shots per year. 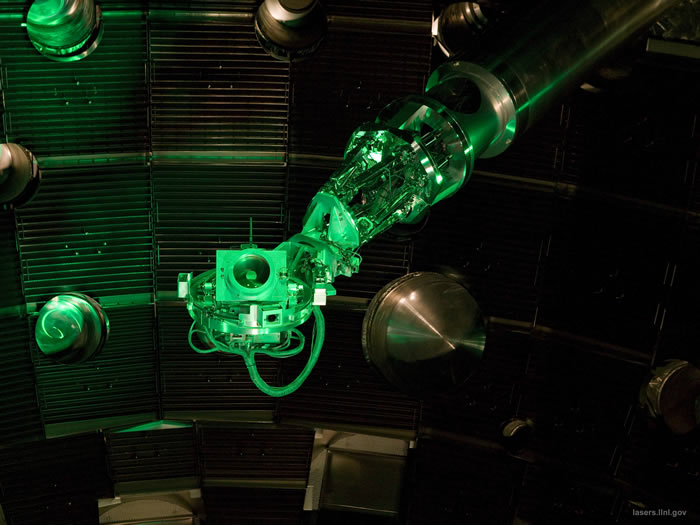 Inserted into the Target Chamber after a shot, the Final Optics Damage Inspection (FODI) system peers down each beamline to record any laser-induced optical damage it detects. If the damage to an optic exceeds the tolerance limits, the optic is replaced and processed through the Optics Recycle Loop.