Keeping NIF Optics on the Job

NIF is the largest optical instrument ever built, with a total optical surface area of eight-tenths of an acre—about 40 times the surface area of the giant Keck telescope in Hawaii. For the past two decades, LLNL researchers have been diligently pursuing better ways of preventing or mitigating laser damage to the optics in the ultraviolet section of the laser—about five percent of the total number of large optics in the system—in order to extend their lifetimes.

The infrared light, known as one-omega or 1ω, generated in NIF’s main laser system is tripled in frequency to ultraviolet (3ω) light in the final optics assemblies (see Final Optics). The wedged focus lenses that direct NIF’s 192 beams to the center of the Target Chamber are made of fused silica, due to its high ultraviolet light transparency, high damage threshold, and excellent surface quality. Fused silica can be damaged, however, when microscopic defects introduced during manufacturing and processing, called damage precursors, are exposed to NIF’s ultra-high ultraviolet laser energies. When the defects absorb and transfer energy to the optic, they can initiate damage sites that grow with subsequent laser shots and eventually could render the optic inoperative. 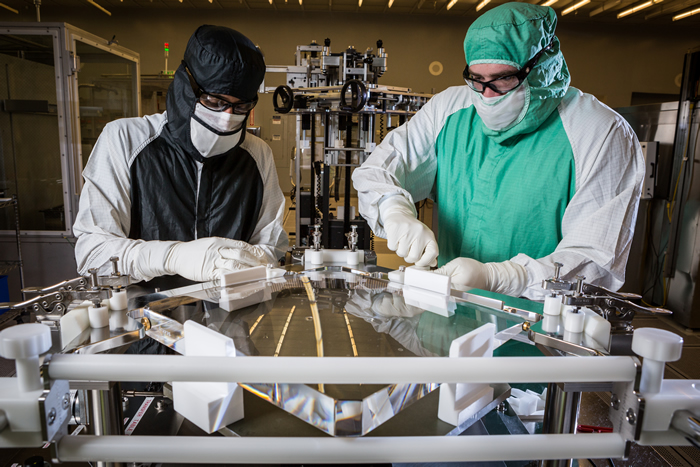 Technicians load a wedged focus lens, part of the NIF final optics assembly, into a cleaning/coating frame for processing in the Bldg. 391 Optics Processing Facility.

Years of study have produced a number of techniques for preventing damage precursors and for repairing damaged optics so they can be returned to service. The advanced mitigation process (AMP), for example, uses optimized hydrofluoric acid to remove the defect layers found on fractured surfaces associated with fine scratches or impurities. 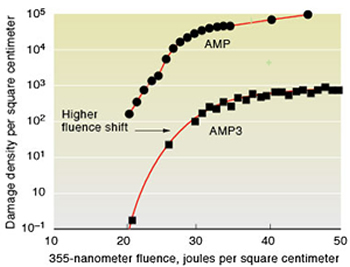 Comparison of the damage density between the advanced mitigation process (AMP) and the newer AMP3, which is optimized to reduce the probability of precipitation from wet chemical processes. AMP3 achieves a 300 times reduction in overall damage density and a seven-joules-per-square-centimeter shift to higher fluences at five-nanosecond pulses.AMP significantly reduces damage sites caused by precursors, primarily at lower fluences (energies per unit area)—less than about 10 joules per square centimeter.

The causes of damage at higher energies, however, have been harder to diagnose, especially in situations where multiple laser shots are fired in rapid succession (see “Probing Energy Loss in High-Rep-Rate Lasers”). Recent research has revealed that precipitates of trace impurities found in processing chemicals are the most significant damage precursors in the high-fluence range. The work has demonstrated that by minimizing the presence of precipitates during chemical processing and drying, the damage produced by high-fluence shots can be reduced by more than two orders of magnitude. The new process, called AMP3, could significantly extend the functional lifetime of NIF optics, helping to further reduce operational costs and improve performance.

AMP3 also enables a 60 percent increase in the amount of energy that can pass through an optic without damage. Recent results show a continued progression toward zero damage through a reduction of 2,000 precursors in damage density, which doubles the damage threshold. Scaling of the AMP3 process to full-size NIF optics is now under way.

A key component of the High-Repetition-Rate Advanced Petawatt Laser System (HAPLS) under construction at LLNL has been installed and commissioned. The new Gigashot-HE diode-pumped solid-state (DPSS) laser system will be used as a pump source for one of HAPLS’ high-energy titanium-doped sapphire (Ti:Sapphire) amplifier stages.

When commissioned to its full design performance, the HAPLS laser system will be the world’s highest-average-power petawatt (quadrillion-watt) laser system. It will be installed in the European Union’s Extreme Light Infrastructure (ELI) Beamlines high-intensity laser science facility now under construction in the Czech Republic. 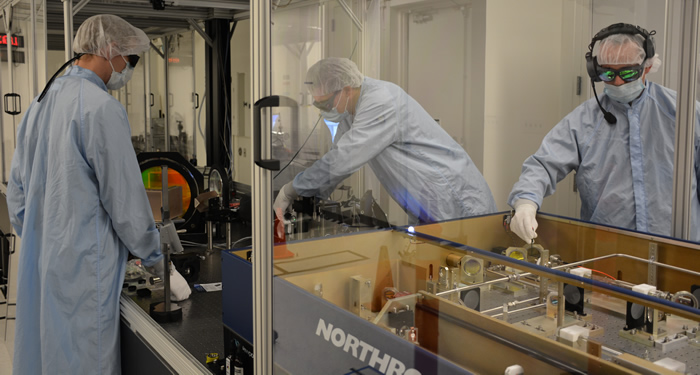 HAPLS is designed to generate 30-joule pulses with 30 femtoseconds (quadrillionths of a second) pulse duration each, delivering a peak power of one petawatt at a repetition rate of 10 pulses per second (10 Hz). This very high repetition rate is a major advancement over current petawatt system technologies, which can fire a maximum of once a second.

Supplied by Northrop Grumman Cutting Edge Optronics (CEO), the injection-seeded, diode-pumped Gigashot-HE laser delivers two joules of 532-nanometer (green) laser energy per pulse at a repetition rate of 10 Hz, with each pulse lasting less than 10 billionths of a second.

The Gigashot-HE consists of four PowerPULSE laser modules; one oscillator, one preamplifier, and two power amplifiers, utilizing radially side-pumped Nd:YAG rods ranging in diameter from three to 18 millimeters. Each PowerPULSE laser module is pulse-pumped by CEO’s laser diode arrays; the arrays have an expected lifetime of more than 10 billion shots, or more than 30 years of continuous operation at 10 Hz.

The pan-European ELI project is being designed to significantly advance the state of the art for high-power lasers, enabling international scientific research in such areas as medical imaging, particle acceleration, biophysics, chemistry and quantum physics. Generation of high-brightness x rays and acceleration of charged particles are among the uses of its ultrashort, high energy pulses.