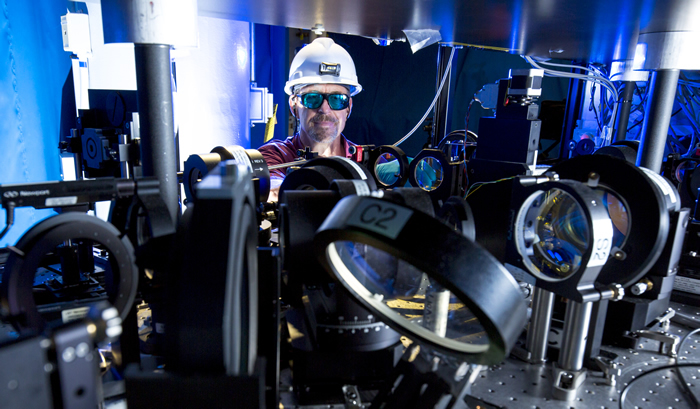 Revealing the Details of NIF Experiments

“Like a thermometer or a camera, diagnostics can tell us if an experiment performed well, take a movie or snapshot of our experiment, and provide us with pieces of information that allow us to answer the important questions we are investigating.”

Getting a grasp on the extreme physics that happens when NIF’s laser beams compress a fusion fuel capsule to the size of a pinpoint requires some of the most sophisticated measuring instruments ever made. Researchers often must examine conditions like those found at the center of stars and in exploding nuclear weapons—exceeding pressures of 100 billion atmospheres and temperatures of 100 million degrees Celsius.

NIF’s highly specialized instruments, called diagnostics, must not only operate in timescales of nanoseconds (billionths of a second) or shorter, but also detect interactions often below the submicron (millionth of a meter) level. Some diagnostics must function under the intense bombardment of both particle and electromagnetic radiation. In fact, it’s this radiation, such as neutrons and x rays, that many diagnostics are designed to detect to help researchers characterize NIF experiments. 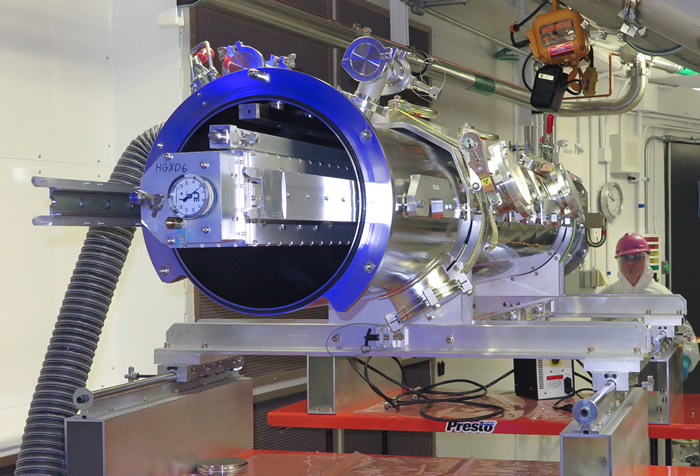 Target Area operators install a hardened gated x-ray detector (HGXD) in a diagnostic instrument manipulator (DIM) in preparation for an experiment. The HGXDs and GXDs measure x-ray emissions from the core of an imploding target to determine the shape and time history of the implosion. The HGXD is hardened against radiation damage for use in high-yield NIF experiments. Credit: James Pryatel.

Transformative diagnostics enable cutting-edge science. NIF makes nearly 120 diagnostics available to internal and external users; but as the boundaries of science are continually pushed, sometimes an experiment requires measuring capabilities that don’t yet exist. Every year, NIF and its partners develop about a dozen new diagnostics to meet these new challenges. 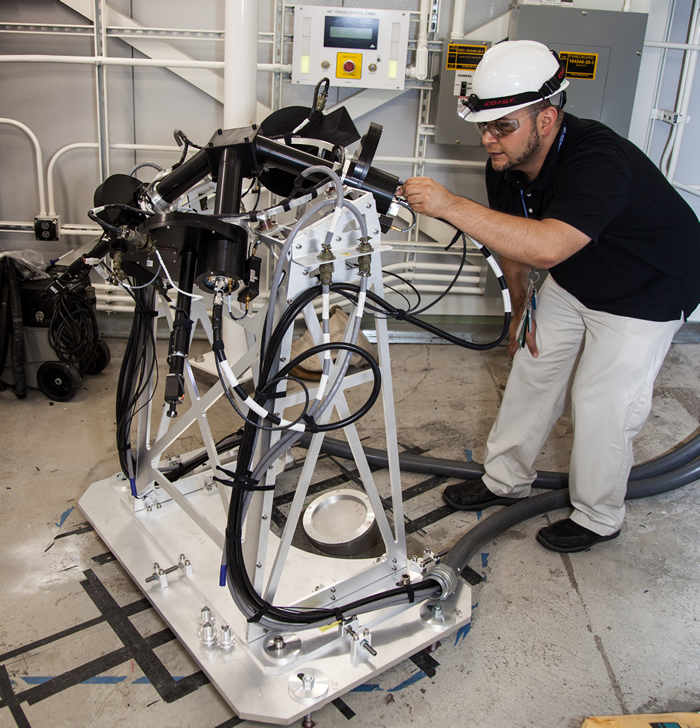 Target Diagnostics engineer Francisco Barbosa services the North Pole neutron time-of-flight detector (nTOF) on the roof of the NIF building. The diagnostic’s four data channels detect and record neutron arrival times during NIF experiments. The data collected by the device help researchers determine the shot’s yield, as well as interesting properties of the plasma producing the neutrons including its temperature and velocity (see “A Top-down View of NIF Neutron Emissions”). Credit: James Pryatel

Plans for NIF diagnostics began in the mid-1990s, when a multi-laboratory Joint Central Diagnostic Team was formed to coordinate efforts to develop NIF diagnostics funded through the inertial confinement fusion (ICF) program at the various National Nuclear Security Administration laboratories. The resulting strategy called for a national effort to develop and implement a comprehensive suite of diagnostics on NIF. These diagnostics would be phased in over time and, when possible, multiple diagnostics would be available to measure key observables. 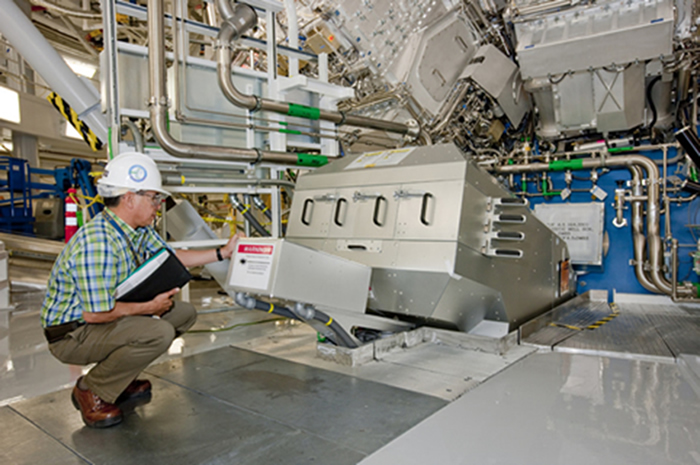 The Magnetic Recoil Spectrometer (MRS) was developed by MIT and the University of Rochester’s Laboratory for Laser Energetics to measure the neutron spectrum from an implosion by measuring proton (or deuteron) energy produced in a collision with the neutrons. MRS is a critical diagnostic for measuring the density and yield of imploded targets, helping researchers quantify how well the shot is approaching ignition conditions.

“The Nova Laser (NIF’s predecessor) was operated from 1984 to 1999,” said NIF Scientific Diagnostic Leader Joe Kilkenny, “becoming the best user facility of the era, with about 100 diagnostics to service its users. The initial NIF diagnostics were based on Nova diagnostics but were much better engineered for facility operations.

NIF’s current diagnostic development benefits from those decades of experience and from the heavy involvement of organizations such as Los Alamos and Sandia national laboratories, the University of Rochester’s Laboratory for Laser Energetics, the Massachusetts Institute of Technology, General Atomics, National Security Technologies, LLC, and the atomic energy agencies in the UK and France. 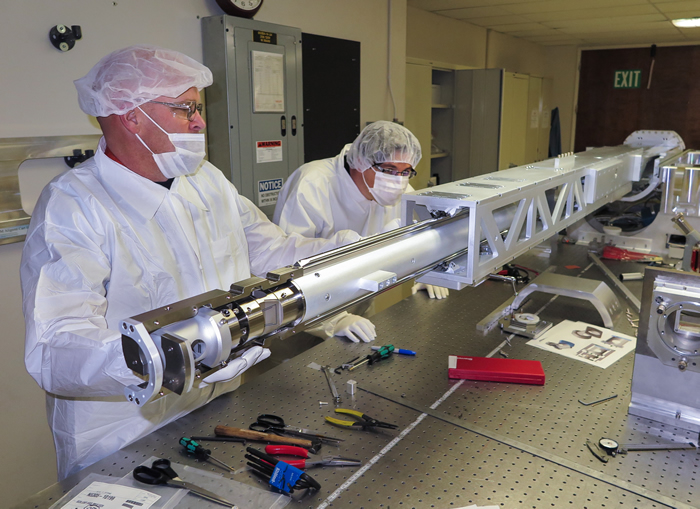 Diagnostic technician Jesse Hamblen (left) and System Manager Jay Ayers mount the telescoping snout for the Kirkpatrick-Baez optic (KBO) on its carriage rails. The KBO is a reflection x-ray microscope that provides improved resolution (better than 10 microns) and 4.5 times greater collection angle compared to a standard pinhole imaging system. The microscope is able to obtain higher-resolution images of hot spots at the heart of target capsules during an ICF implosion. Credit: James Pryatel

NIF’s nuclear, optical, and x-ray diagnostics provide more than 650 channels for experimental data. Many diagnostics have multiple channels; for example, the Real-time Neutron Activation Detector (RT-NAD) system, a network of individual neutron detectors positioned at different angles around the Target Chamber, provides researchers with 48 data channels to reconstruct a 3D map of the fusion source and fuel. And each of NIF’s two DANTE soft x-ray power diagnostics has 18 data channels. 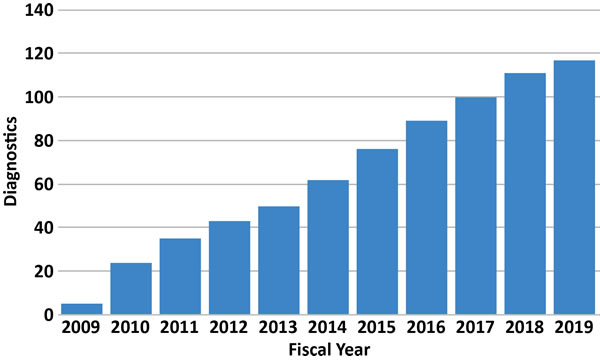 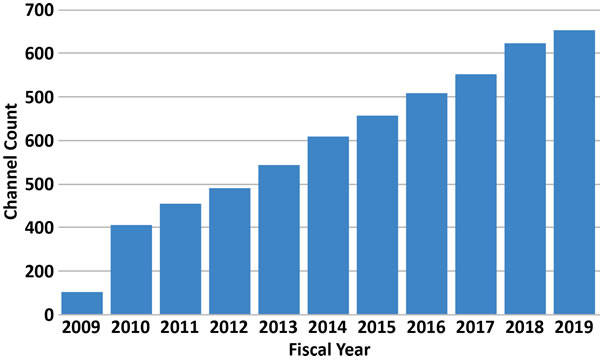 The need for multiple complementary and redundant diagnostics was recognized as an essential requirement since no single diagnostic makes a perfect measurement. Thermonuclear yield, for example, is measured by three absolute and independent diagnostics. 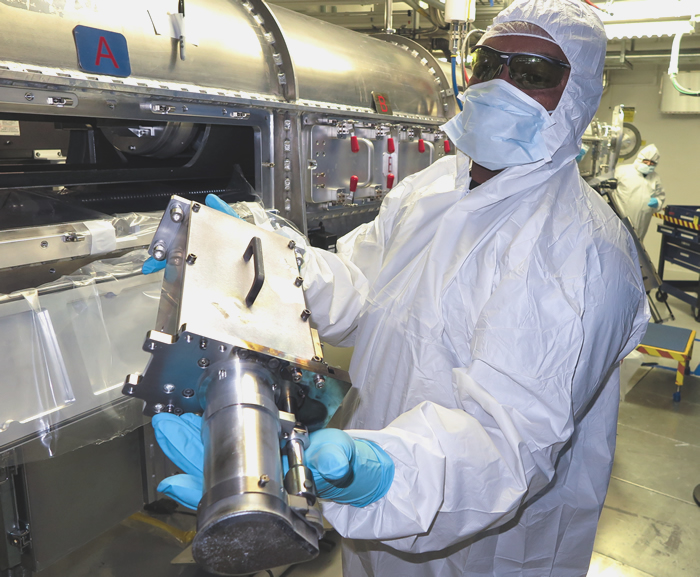 Target Area Operator Bill Board removes the neutron imager snout from a diagnostic instrument manipulator. The NIF neutron imager system (NIS) produces an image of the source distribution of high-energy, or primary, neutrons and lower-energy “down-scattered” neutrons produced by fusion reactions in a NIF implosion. This enables researchers to determine hot-spot size and fuel asymmetry and to infer the cold fuel areal density, a measure of the combined thickness and density of the fuel shell. Credit: James Pryatel 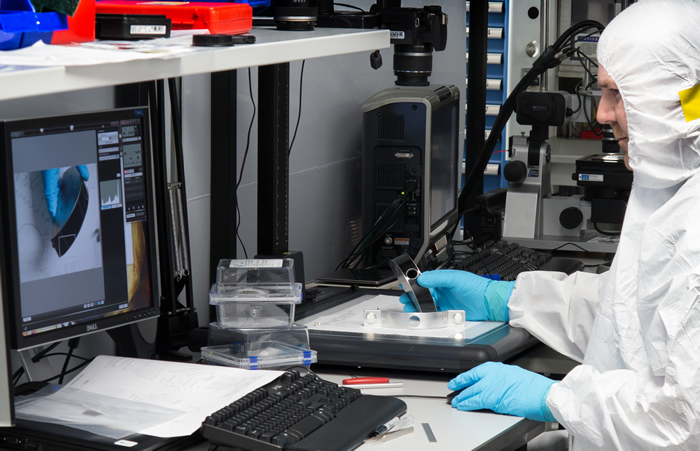 Diagnostics technician Bowdi Helgesen assembles a TARDIS (Target Diffraction In-Situ) x-ray diffraction diagnostic in the NIF diagnostics factory. Used in NIF’s high energy density science and Discovery Science programs, the TARDIS experimental system provides important information on the characteristics of materials used in nuclear weapons as they age or are subjected to the immense pressures and temperatures of a thermonuclear explosion, as well as materials found in the center of stars and giant planets.

Over the last 10 years, NIF’s diagnostics have improved in efficiency, resolution, and sensitivity. Instead of “seeing” a fusion target at a single point in time during compression in two dimensions (like a photograph), they have evolved to create images over three dimensions and at multiple times. Each new diagnostic capability enables researchers to gain more insight into the many forces at play every time the NIF lasers fire on a target. 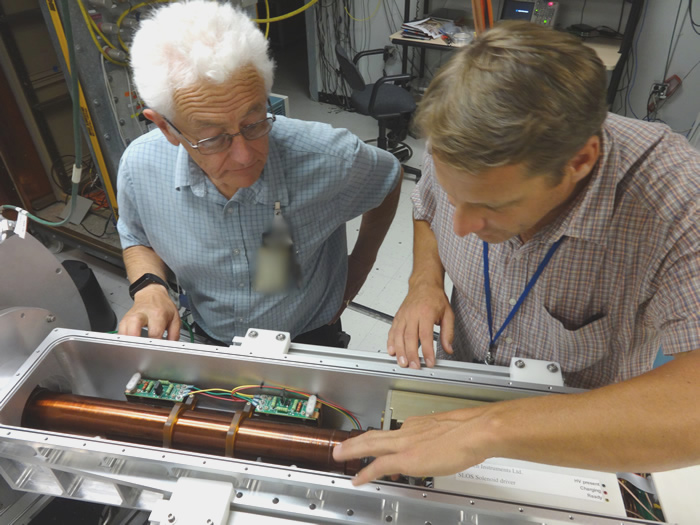 (Above) Joe Kilkenny, left, NIF scientific diagnostic leader, and Terry Hilsabeck of General Atomics examine the drift tube in NIF’s groundbreaking Single Line of Sight (SLOS) framing camera. The drift tube is analogous to the slow-motion feature on a standard camera. Credit: Kenneth Piston (Below) Time-resolved images of a NIF implosion obtained using the SLOS combined with NIF’s Crystal Backlighter Imager (CBI) (see “‘Super Camera’ Peers Into NIF Implosions”). In the experiment, designed to test the imaging capability of the CBI-SLOS on an ICF implosion, a CH (plastic) target capsule with a tritium-hydrogen cryogenic fuel layer in a 5.75-millimeter-diameter hohlraum was driven with a two-shock laser pulse.

Next Up: Efficiency Improvements