LLNL’s laser-Compton team has demonstrated for the first time the generation of two nearly-identical high-charge electron bunches spaced by only one X-band (11.424-GHz) radio-frequency (RF) period. This milestone is a key component of LLNL’s three-year Laboratory Directed Research and Development (LDRD) project to validate the Laboratory’s patent-pending concepts for high-flux, mono-energetic x-ray and gamma-ray production. It was accomplished using the new state-of-the-art X-band accelerator test station in Bldg. 194, which is being developed to investigate accelerator optimization for future upgrades of LLNL’s laser-Compton light source technology.

“This result puts LLNL at the forefront of international capabilities with respect to compact, high gradient accelerator R&D,” said NIF&PS Chief Technology Officer Chris Barty, “and has potential to fundamentally change the way in which Compton light sources are designed and optimized.” 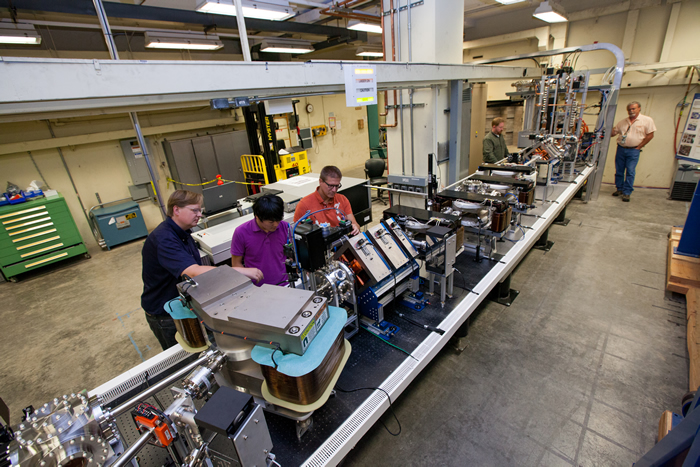 The X-band test stand is currently the only such capability in the world to combine both a high-stability, solid-state RF power source with a modern X-band accelerator structure and photo-gun. The ability to produce and accelerate multiple high-quality electron bunches paves the way for orders-of-magnitude increases in laser-Compton x-ray and gamma-ray output and has the potential to significantly impact both nuclear materials management missions and nuclear science studies based on mono-energetic gamma-rays, as well as novel medical and high-energy-density applications of laser-Compton x-rays.

The team includes researchers from both NIF & Photon Science and the Laboratory’s Physical and Life Sciences Directorate, as well as summer students from UC Irvine.

X-ray emissions from a high-neutron-yield NIF fusion reaction last less than 100 picoseconds (trillionths of a second). Before now, even the fastest x-ray framing cameras were unable to resolve the details of implosion velocity and symmetry in the core of a high-yield NIF implosion at the temporal resolution needed by inertial confinement fusion (ICF) researchers. To provide the necessary temporal resolution—the time scale over which changes in size or position can be measured—in order for NIF to continue moving toward ignition, an international team including researchers from General Atomics, the UK’s Kentech Instruments, Ltd., and LLNL has developed the world’s fastest x-ray framing camera: the Dilation X-ray Imager, or DIXI.

DIXI is a two-dimensional x-ray imager with a temporal resolution of about five picoseconds—it records a frame every five trillionths of a second, the equivalent of 200 billion images a second. “You would need a really big SD card on your camera to store that many images,” notes the DIXI system’s responsible engineer, Jay Ayers. The DIXI camera converts x-rays from an array of high-magnification 10-micron pinholes mounted 10 centimeters from Target Chamber Center (TCC) to electron images. These are dilated, or stretched, by a factor of 50 and then coupled to a conventional shuttered electron camera. This process results in a much shorter effective shutter speed and provides unprecedented x-ray time-resolution images.

DIXI uses a voltage ramp to impart a velocity gradient on the signal-bearing electrons that are generated when x-rays hit the transmission photocathode (PC). As the electron signal traverses a drift space, it is stretched out in time by the velocity gradient, resulting in a signal that is approximately 50 times longer. The high temporal resolution is achieved by selecting only a small part of the stretched signal stream. (See the video for a narrated animation).

DIXI is not only ten times faster than any other x-ray framing camera, it also is uniquely designed for operation in a hostile high-neutron environment, such as NIF as it approaches ignition. As currently installed, DIXI can diagnose fusion reactions producing up to approximately 1017 (100 quadrillion) neutrons.

Ayers and System Scientist Sabrina Nagel credited collaborator Jonathan Hares of Kentech with conceiving the instrument—“DIXI was his brainchild,” Nagel said—and Terry Hilsabeck of General Atomics with leading the design and fabrication of the detector platform under an LLNL contract. The NIF Engineering Group designed and fabricated the pinhole aperture, support, frame, and shielding, and performed the overall assembly and facility integration effort.

DIXI’s improved temporal resolution enables it to resolve implosion details close to the instant of extremely bright peak x-ray emission from the fuel core, which tends to wash out images just before and after it occurs. And to protect it from neutron and other radiation, the instrument is mounted 20 degrees off-axis on the outside of the NIF Target Chamber, “so the detector does not look directly at TCC,” Nagel explains. “It sits below the port, so it gets shielding from the 18 inches of Gunite (concrete) on the Target Chamber.” In addition, DIXI is shielded by 1,300 pounds of lead and high-density borated polyethylene.

(Left) Mike Morris and Ken Piston install a film pack in the DIXI diagnostic in preparation for an Aug. 19-20 NIF high-yield experiment. (Right) Image of the first high-temporal-resolution implosion data recorded by DIXI on a NIF shot.

DIXI’s complex instrumentation and off-axis positioning on the Target Chamber posed a number of timing, alignment, and logistics challenges. “It has been the most difficult instrument to time to date,” Ayers said. Aligning the pinhole array to ensure that images would be collected by the detector was another challenge, as were the space constraints involved in fitting DIXI into the crowded Target Bay. “There was a lot of optimization done with panels and shielding geometry,” Nagel said. In addition, new targets with special windows in the hohlraum are needed to provide DIXI with line-of-sight access to the x-rays from the fusion reaction.

Before it was installed on NIF in February, DIXI underwent intensive testing on the TITAN and COMET lasers at the Laboratory’s Jupiter Laser Facility (JLF) and demonstrated the temporal resolution needed by NIF. Since installation, Nagel said, it has “ridden along” on several high-yield NIF shots and recorded background neutron radiation levels as low as or lower than predicted by simulations. Nagel and LLNL’s Ken Piston led the testing at JLF. A second DIXI remains at JLF as a backup.

DIXI recorded its first NIF data during a high-yield deuterium-tritium (DT) experiment on Aug. 19-20. The instrument is well on its way to adding important capabilities to NIF by temporally resolving hot-spot formation, x-ray emission, fuel motion, and mix levels in the hot-spot at neutron yields of up to 1017. For a detailed description of DIXI, see the article in Review of Scientific Instruments. 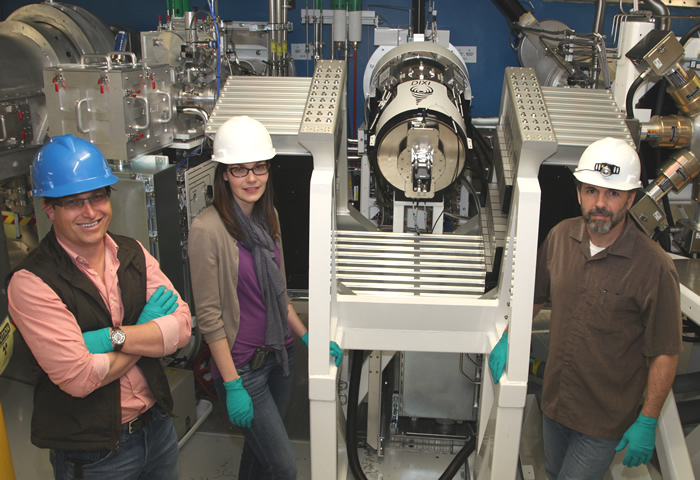 Nearly a year into the project, much progress has been made, and all contract milestones to date have been delivered on schedule. Under the same agreement, ELI-Beamlines delivers various work packages to LLNL enabling HAPLS control and timing systems to interface with the overarching ELI-Beamlines facility control system. In a collaborative effort, NIF & Photon Science researchers and engineers work with scientists from the ELI facility to develop, program and configure these systems.

According to Constantin Haefner, LLNL’s project manager for HAPLS, this joint work is vital. “Working closely together on these collaborative efforts allows us to deliver a laser system most consistent with ELI Beamlines facility requirements. It also allows the ELI-Beamlines team to gain early insight into the laser system architecture and gain operational experience,” he said.

This summer, that process began. Marc-Andre Drouin and Karel Kasl, control system programmers for ELI, spent three months at LLNL working with the HAPLS integrated control system team. ELI’s Jack Naylon and Tomas Mazanec also visited LLNL to contribute to the work. During their time at LLNL, they focused almost exclusively on the ELI-HAPLS timing interface, which allows exact synchronization of HAPLS to the ELI Beamlines master clock. 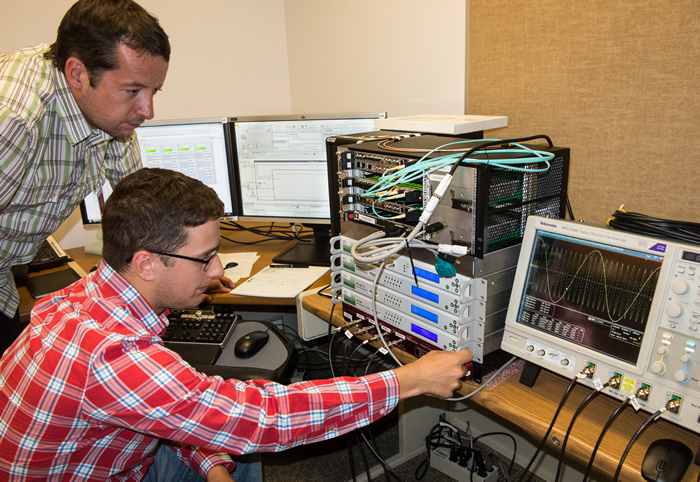 “The HAPLS timing system must be able to operate independent of the ELI timing system,” Drouin said. “But, it also needs to be capable to be perfectly synchronized to ELI. That bridge between timing systems is what we have been working on—making sure HAPLS runs very well independently as well as integrates with ELI.”

Haefner pointed out that while HAPLS is a major component, it becomes a subsystem when it moves to the ELI facility. Once at ELI, HAPLS will integrate with the wider user facility, consisting of target systems, experimental systems, diagnostic systems—all of which have to be timed and fed from a master clock.

Kasl likened the master clock to a universal clock used by an office. “We brought the clock here, and now everyone in the office is using the clock to synchronize their work,” he said.

The master clock, built by ELI, was programmed as a bridge between the ELI and HAPLS timing systems. During their time at LLNL, Drouin and Kasl worked on configuring that hardware and writing the software that talks to the clock and to the subcomponents that control a very precise sequence of events.

The ELI team finished their three-month stint at LLNL in mid-August, but they will be back in early fall to continue work—and they’re looking forward to it.

“This unit is going to get integrated with our other systems, so there needs to be an overlap between the two teams,” Kasl said. “It’s good experience for us to learn about the internal workings of the HAPLS system,” Drouin added. “Having this inside knowledge of the most integral parts of the laser is a very big advantage for us in the long run.” 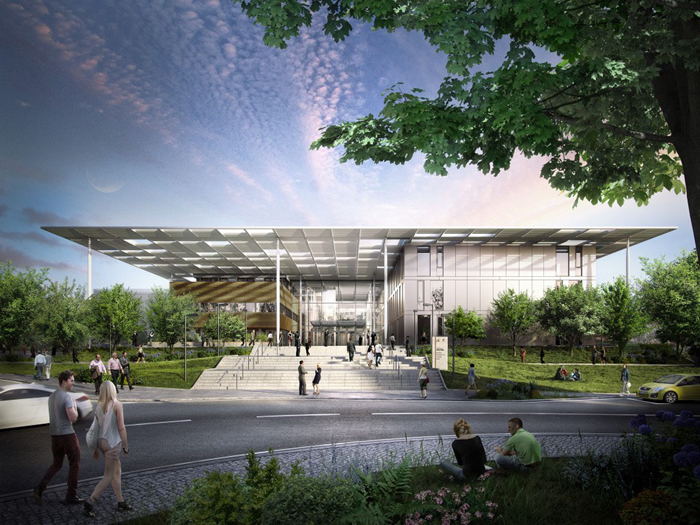 An artist’s rendering of the ELI Beamlines facility now under construction in the Czech Republic.