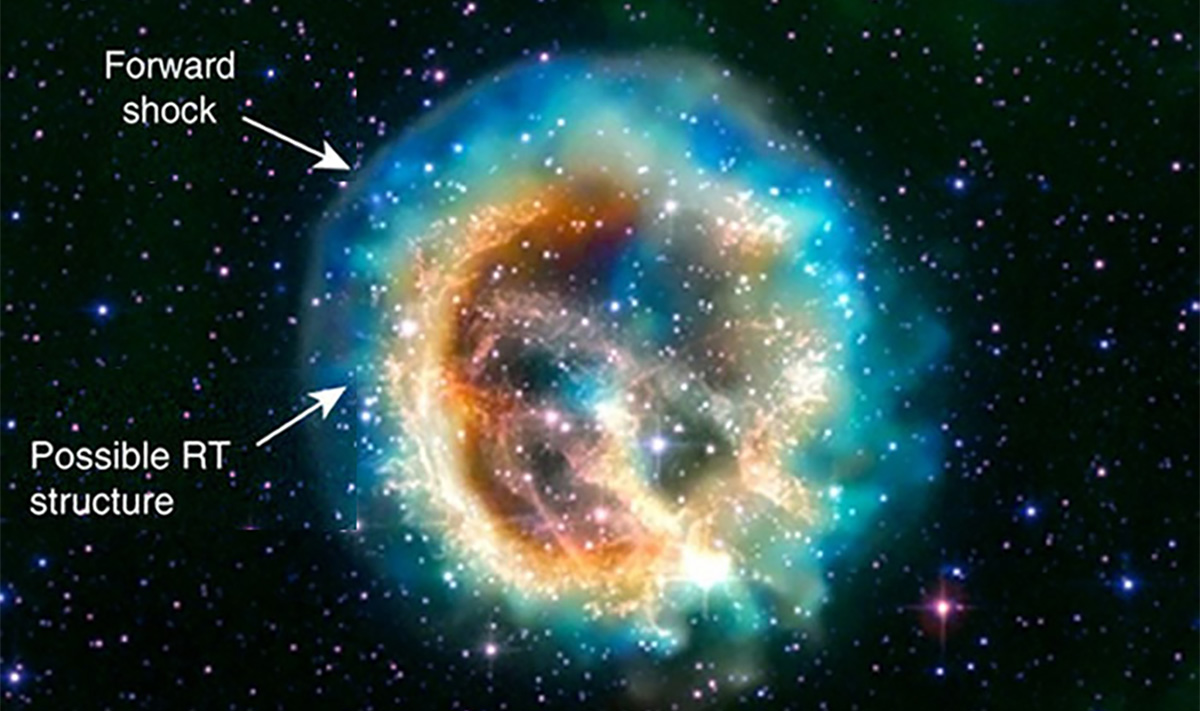 False-color Chandra X-ray Observatory image of supernova remnant E0102.2-72, the spectacular remains of a core-collapse supernova located about 190,000 light-years away in the Small Megallanic Cloud in the constellation Tucana. The expanding multimillion-degree remnant is about 30 light-years across. What appear to be Rayleigh-Taylor “spikes” can be seen in the outer edge of the expanding supernova remnant as the expanding envelope is decelerated by the circumstellar medium. Credit: (x-ray) NASA/CXC/MIT/D. Dewey et al. & NASA/CXC/SAO/J. DePasquale; (optical) NASA/STScI

NIF experiments support studies relevant to the entire lifecycle of a star, from its formation from cold gas in molecular clouds, through its subsequent slow evolution, and on to what might be a rapid, explosive death. To determine a star’s structure throughout the various stages of its life, astrophysicists need NIF’s ability to mimic the temperatures (10 to 30 million kelvins or 18 to 54 million degrees Fahrenheit) found in stars’ cores.

One astrophysics project at NIF is investigating the evolution of turbulence in supernova explosions. In a core-collapse supernova, a star with 10 times or more mass than our Sun uses up the nuclear fuel at its core element by element, starting with hydrogen and working up the periodic table. As each fuel is consumed, the star develops an onion-like structure, with layers differing in density and material.

Once the fusion process can no longer compete with the pull of gravity, the star’s core collapses in a few seconds, triggering a powerful explosion that sends a shock wave back through the star. Propelled by the shock wave, fingers of matter from heavier layers penetrate the overlying lighter shells, resulting in Rayleigh-Taylor hydrodynamic instabilities (the same instabilities that can degrade NIF implosions).

The violent collapse produces an enormous number of neutrinos and many complex hydrodynamic effects. The resulting explosion appears as a bright flash of ultraviolet light followed by an extended period of luminosity that is initially brighter than the star’s entire galaxy. The explosion leaves behind a remnant that is either a neutron star or a black hole.

Another NIF astrophysics campaign is probing the formation of turbulent collisionless shocks in conditions relevant to young supernova remnants by creating a hydrodynamically scaled version of the shock in the laboratory.

Astrophysical collisionless shocks are among the most powerful particle accelerators in the Universe. Generated by violent interactions of supersonic plasma flows with the interstellar medium, supernova remnant shocks amplify magnetic fields and accelerate electrons and protons to speeds approaching the speed of light.

Astrophysical shocks develop turbulence at very small scales, however—too small to be seen by astronomical observations—that helps accelerate electrons at the shock wave before being boosted up to their final velocities.

Researchers conducted laser-driven plasma flow experiments on NIF to probe the formation of turbulent collisionless shocks in conditions relevant to young supernova remnants. They were able to identify the mechanism that allows electrons to be accelerated by small-scale turbulence produced within the shock transition. Their observations provide new insight into electron injection at shocks and open the way for controlled laboratory studies of the physics underlying cosmic accelerators.

Next up: Nuclear Astrophysics