When stars explode as supernovas, they produce shock waves so powerful they can blast streams of particles called cosmic rays into the universe at nearly the speed of light. Yet the exact mechanisms behind these phenomena remained mysteries for decades.

Now, in experiments at the National Ignition Facility (NIF), an international team of scientists from institutions including SLAC National Accelerator Laboratory of Menlo Park and Lawrence Livermore National Laboratory (LLNL) have devised a new way to study the inner workings of astrophysical shock waves by creating a hydrodynamically scaled version of the shock in the lab.

They found that astrophysical shocks develop turbulence at very small scales – scales that can’t be seen by astronomical observations – that helps accelerate electrons at the shock wave before being boosted up to their final velocities. A paper on their research was published June 8 in the journal Nature Physics. 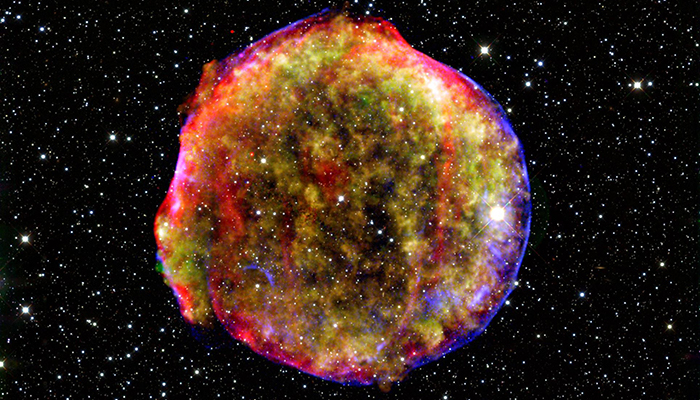 “It is totally awesome to have determined that electromagnetic fields are generated simply from fast-moving, supersonic, low-density interpenetrating plasma flows,” said LLNL physicist Hye-Sook Park. “It is even more exciting to see the unquestionable shock formation and particle accelerations created in our experiments after working on the subject over a decade.”

Park has been leading the project on both NIF and at the University of Rochester’s Laboratory for Laser Energetics Omega Laser Facility (see “International Team Conducts First Collisionless Shock Experiment on NIF”).

“Our success was enabled by strong teamwork, built on a close collaboration between highly talented experimentalists, sophisticated simulations, ingenious diagnostics, and incredible facility support as part of the NIF Discovery Science program,” she said. “When we look up at the sky with our telescopes now, we know how some of those beautiful features are created.”

Astrophysical shock waves around supernovas are not unlike the shockwaves and sonic booms that form in front of supersonic jets. The difference is that when stars blow up, it forms what physicists call a collisionless shock in the surrounding gas of ions and free electrons, or plasma.

These plasma phenomena are ubiquitous in astrophysics and play key roles in many important astronomical observations. Yet the mechanisms that form the beautiful, thin, filamentary emission structures observed around supernova remnants such as in SN 1006 (the supernova that exploded in the year 1006) and the Tycho supernova remnant have remained enduring mysteries.

Rather than running into each other as air molecules would, individual electrons and ions are forced around by strong electromagnetic fields and shock waves within the plasma.  Researchers have worked out that in this environment, charged particles bounce across the shock multiple times and accelerate to extreme speeds.

Yet there was a problem: Particles already have to be moving pretty fast to be able to cross the shock in first place, and no one was sure what further boosted the particles up to speed. The obvious way to address that issue, known as the injection problem, would be to study supernova and see what the plasmas surrounding them are up to. But with even the closest supernovas thousands of light years away, it’s impossible to simply point a telescope at them and get enough detail to understand what’s going on.

“These are fascinating systems, but because they are so far away it’s hard to study them,” said Frederico Fiuza, a SLAC senior staff scientist and the paper’s lead author. “We are not trying to make supernova remnants in the lab, but we can learn more about the physics of astrophysical shocks there.”

Computer simulations performed by Anna Grassi, a postdoctoral fellow at SLAC, indicated creating such conditions was feasible in the laboratory. The team, however, would need to create a fast, diffuse shock wave that could imitate supernova remnant shocks. They would also need to show that the density and temperature of the plasma increased in ways consistent with shock formation —and, of course, they wanted to understand if the shock wave would shoot out electrons at very high speeds.

Igniting a shock wave at NIF

To accomplish those goals, the team turned to NIF, the world’s largest and most energetic laser.

For more than a decade, the LLNL researchers and their international collaborators have carried out a series of laser-driven experiments aimed at studying the interactions of high-velocity interpenetrating plasma flows. And while experiments at the 30-kilojoule Omega Laser Facility observed filamentary magnetic fields structures produced by the novel Weibel instability phenomenon, no collissionless shock formations were observed and no particle acceleration was measured.

With 192 giant beams, NIF offered 30 times more available laser energy. In the NIF experiments, 900-kilojoule laser pulses illuminated two plastic disks, which were separated by  25 millimeters. The pulses produced a pair of plasma flows headed straight into each other at about 1,500 kilometers per second (or 3.3 million miles per hour). 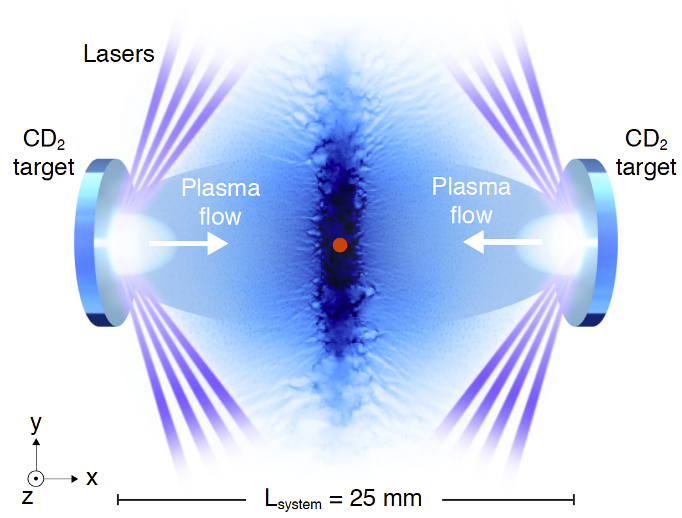 When the flows met, optical and x-ray observations revealed strong increases in temperature and density, features that proved they had produced in the lab a shock wave in conditions similar to a supernova remnant shock.

Another key observation was that when the shock was formed, it was indeed capable of accelerating electrons to nearly the speed of light. And they observed maximum electron velocities that were consistent with the acceleration they expected based on the measured shock properties.

Large scale particle-in-cell simulations carried out by a team from SLAC helped reveal some of the detailed acceleration mechanisms, which were benchmarked against experimental data of the simulation code.

“We can’t see the details of how particles get their energy even in the experiments, let alone astrophysical observations, and this is where the simulations really come into play,” Grassi said.

Simulation results suggested that turbulent electromagnetic fields within the shock wave itself appear to be able to boost electron speeds up to the point where the particles can escape the shock wave and cross back again to gain even more speed. This mechanism is similar to what happens when the shock wave gets particles up to astronomical speeds, just on a smaller scale.

“I am extremely proud of the whole team,” he said. “What makes this study particularly impactful is that we were able to make direct, quantitative measurements of the major plasma parameters of the shocked region and of the resulting high energy electron spectrum. These measurements will therefore allow us to truly benchmark and constrain the theoretical frameworks used to model these phenomena and therefore move this research field forward.”

“These types of measurements are only possible due to the constant efforts of the NIF team to develop and deploy new, exciting, and innovative diagnostic capabilities,” Swadling said.

Questions remain, however, and in future experiments the researchers plan detailed measurements of the x rays emitted by the electrons the moment they are accelerated to investigate how electron energies vary with distance from the shock wave.

The team also plans to investigate the dynamic of the ions in these laboratory scale collisionless shocks, particularly to see if ions such as protons can be accelerated to high energies by these shocks and to connect them to the astrophysical implications. This work opens a new way to study the physics of collisionless shocks in the lab and build better models for astrophysics and plasma physics.