Using a novel optical Thompson scattering technique, a team of researchers including scientists from LLNL have made the first detailed, quantitative measurements of the magnetic field structure of plasma filamentation driven by the Weibel instability. The results were reported in a paper recently published by Physical Review Letters. 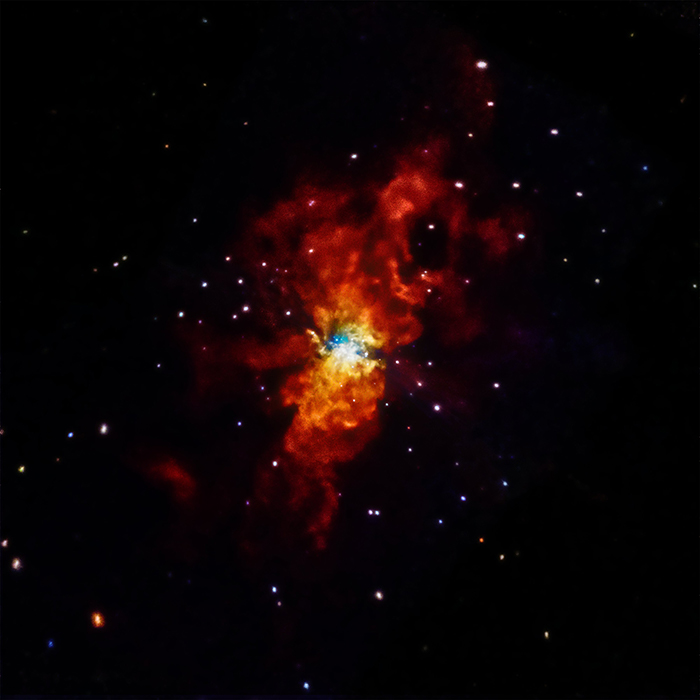 Researchers have detailed the creation of magnetic fields formed by the expansion of supernova explosions, like SN 2014J, into the interstellar medium. Credit: NASA (Click to expand photo.)

These high energy density (HED) experiments study the processes responsible for the formation of collisionless shocks, a phenomenon observed in astrophysical settings such as the expansion of supernova explosions into the interstellar medium. The particles from these explosions and the interstellar medium are at a very low density and might travel light years without colliding.

The plasma, however, is able to self-generate strong magnetic and electric fields. As the streams of plasma pass through one another, they become susceptible to the Weibel instability which causes the two interpenetrating flows to “filament” and clump together into separate streams. Magnetic fields wrap around these filamented flows, increasing the degree of filamentation.

The plasma amplifies these magnetic fields until they become strong enough to completely turn the particles around. At that point the flow stops and the collisionless shock is formed. The powerful magnetic fields associated with the shock have another effect – their turbulent motion in the plasma accelerates charged particles to high energy, producing cosmic rays which can be observed on Earth (see “Shedding Laser Light on Mysterious Cosmic Rays”). The Weibel instability is the most critical element in the shock formation process.

“The aim of the experiments is to investigate the dynamics of the Weibel instability,” said George Swadling, LLNL physicist and lead author on the paper. “While the effects of filamentation had been observed in previous experiments using proton radiography, no direct measurements had been made of the plasma dynamics. These direct measurements can be used to very directly benchmark the theoretical and numerical models which are used to understand the growth and development of this instability.

“These processes occur at scales that are too small to observe in astrophysical systems, so lab experiments provide the best opportunity to be able to test the theoretical models,” Swadling added. “In this case, we were able to constrain the model used to predict the maximum strength of the magnetic fields produced by this process.”

The researchers collided the flows and studied the behavior of plasma at the collision center using the optical Thomson scattering diagnostic, which measures the temperature, density and velocity of the plasma streams. This allowed them to directly observe the formation of plasma filaments due to the Weibel instability and to measure the current and magnetic field associated with those filaments.

“An enormous amount of theoretical and simulation work has been carried out to understand how this instability develops and how it can form shocks and accelerate particles,” Swadling said. “The experimental evidence to test these theories has, however, been wanting. Our highly quantitative data therefore represent one of the best opportunities yet to test the theoretical models and simulation codes used to predict these phenomena.”

Looking ahead, the team will apply what they learned in this campaign to benchmark the particle-in-cell models used to design experiments and make more measurements when the instability has developed further, allowing them to observe the transition from the unstable plasma to the fully formed shock state.