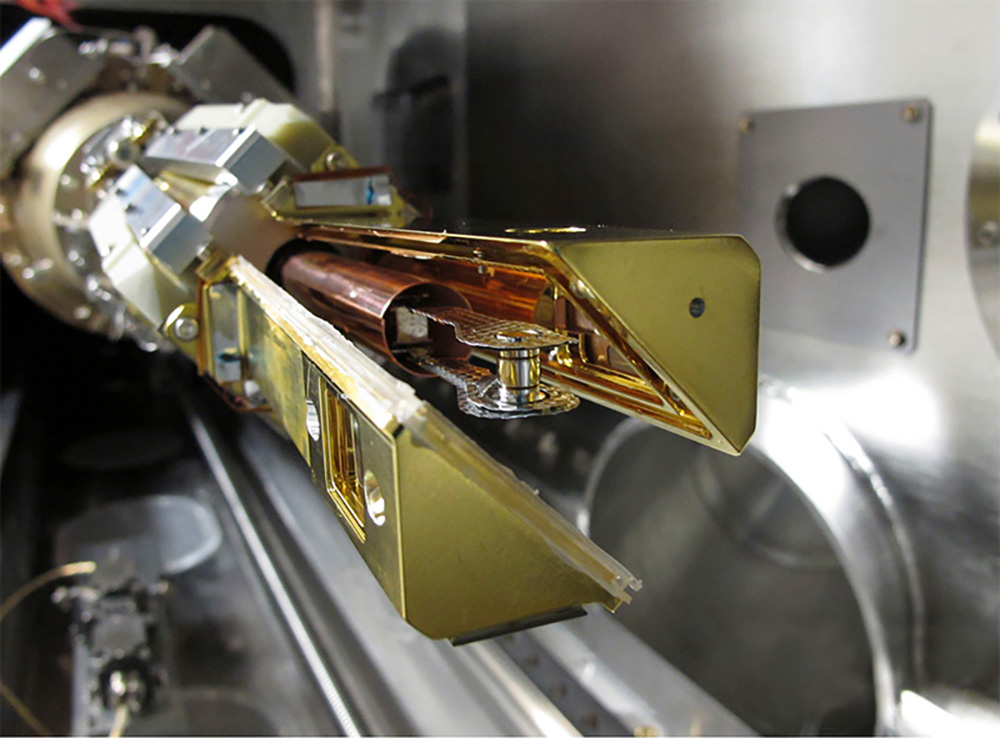 A cryogenically cooled target is inserted into the NIF Target Chamber by a cryogenic target positioner arm. The partially open protective shroud retracts a few seconds before shot time. 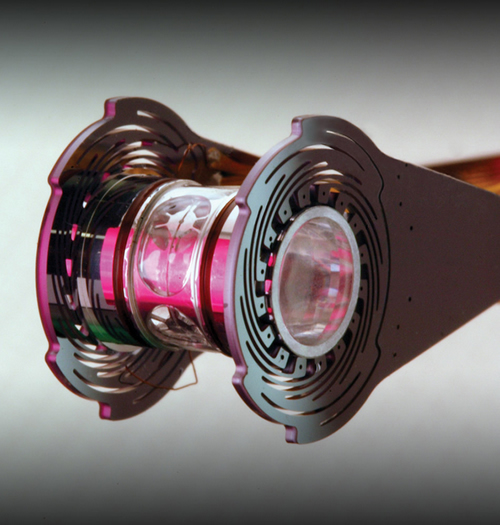 “I attribute our success to an innovative, diverse team of scientists that share their varied technical backgrounds to solve a highly multi-disciplinary challenge.”

As the pursuit of fusion ignition and other research continues on NIF, LLNL researchers are conducting increasingly challenging experiments. And a key to the success of these experiments is the hard work and dedication of the talented members of the NIF Target Fabrication Team. Their expertise in developing and refining intricate, precisely fabricated targets that meet the researchers’ needs has made a vital contribution to NIF’s progress over the last 10-plus years. 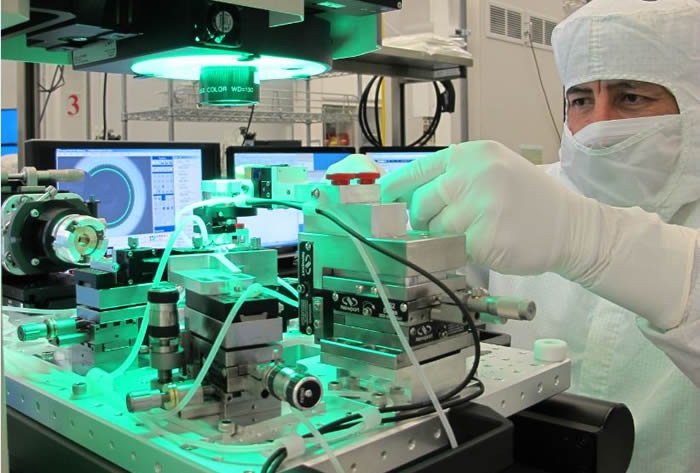 Using an optical coordinate measuring microscope, Target Assembler Sal Diaz centers a target capsule inside a hohlraum at the final cryogenic target assembly station. In a standard cryogenic target, the capsule is supported by thin polymer membranes that are only 45 nanometers (billionths of a meter) thick and must be centered in the hohlraum within 25 microns (millionths of a meter).

While some target designs can be used more than once, the majority must continually be revamped in response to experimental results and ever-more sophisticated diagnostics. Targets designed for inertial confinement fusion (ICF) and high energy density (HED) experiments, for example, include a variety of hohlraum shapes, sizes, and linings as well as target capsule materials ranging from plastic to beryllium and high-density carbon, or diamond. 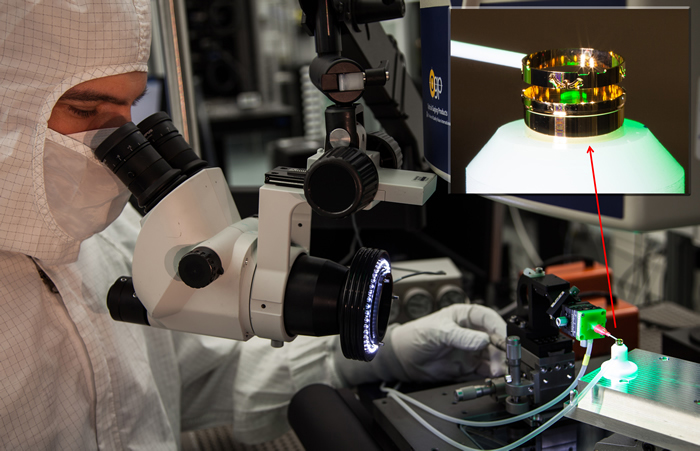 Target Fab technician John Bigelow assembles a prototype tentless-capsule target that has a four-sectioned hohlraum. The top and bottom two sections sandwich membranes that will capture the capsule with minimal spot contacts, which can cause perturbations during NIF implosions. The clear membrane, 50 nanometers thick and composed of polyimide with a thin layer of amorphous carbon, covers a lower section of the hohlraum as the second section is lowered into place. Once together, they will be mated with a like pair of sections with the capsule in between.

“The team really comes together to work through challenges and meet new requirements. We have a fun team environment and the work is never boring.”

Targets for the wide range of NIF experiments, such as ICF, equation of state, complex hydrodynamics, and radiation transport, provide information on such things as shock timing, capsule implosion shape, implosion velocity, and the extent to which the colder deuterium-tritium fuel in the capsule mixes with the hot spot in the core. For example, to reduce implosion instabilities, researchers are investigating several different methods of suspending the target capsule inside the hohlraum and decreasing the size of micro-thin fill tubes used to inject fusion fuel into the capsule.

NIF targets are marvels of design and manufacturing precision; some components must be machined to an accuracy of one micron with surface features no larger than approximately 10 nanometers. The Target Fabrication Team has developed a number of new measurement instruments and metrology techniques to help ensure the highest standards of quality and precision are met. 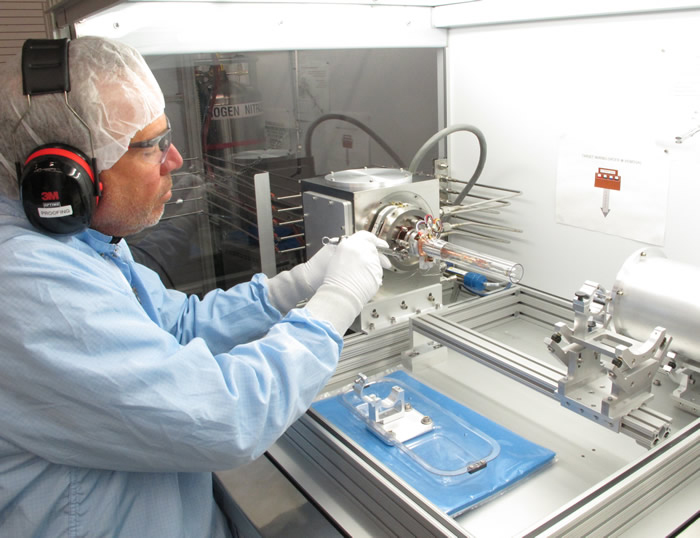 Principle operator Steve Gross secures a cryogenic target to NIF’s automated target proofing station. The system performs final tests on both cryogenic and room-temperature targets, reducing the time required for checking all the valves and pressures for leaks from about 11 effort hours per target to three hours per target.

Following the example of the automobile industry and other mass-production facilities, the team uses robotics and automated systems to reduce assembly effort hours on time-consuming processes. 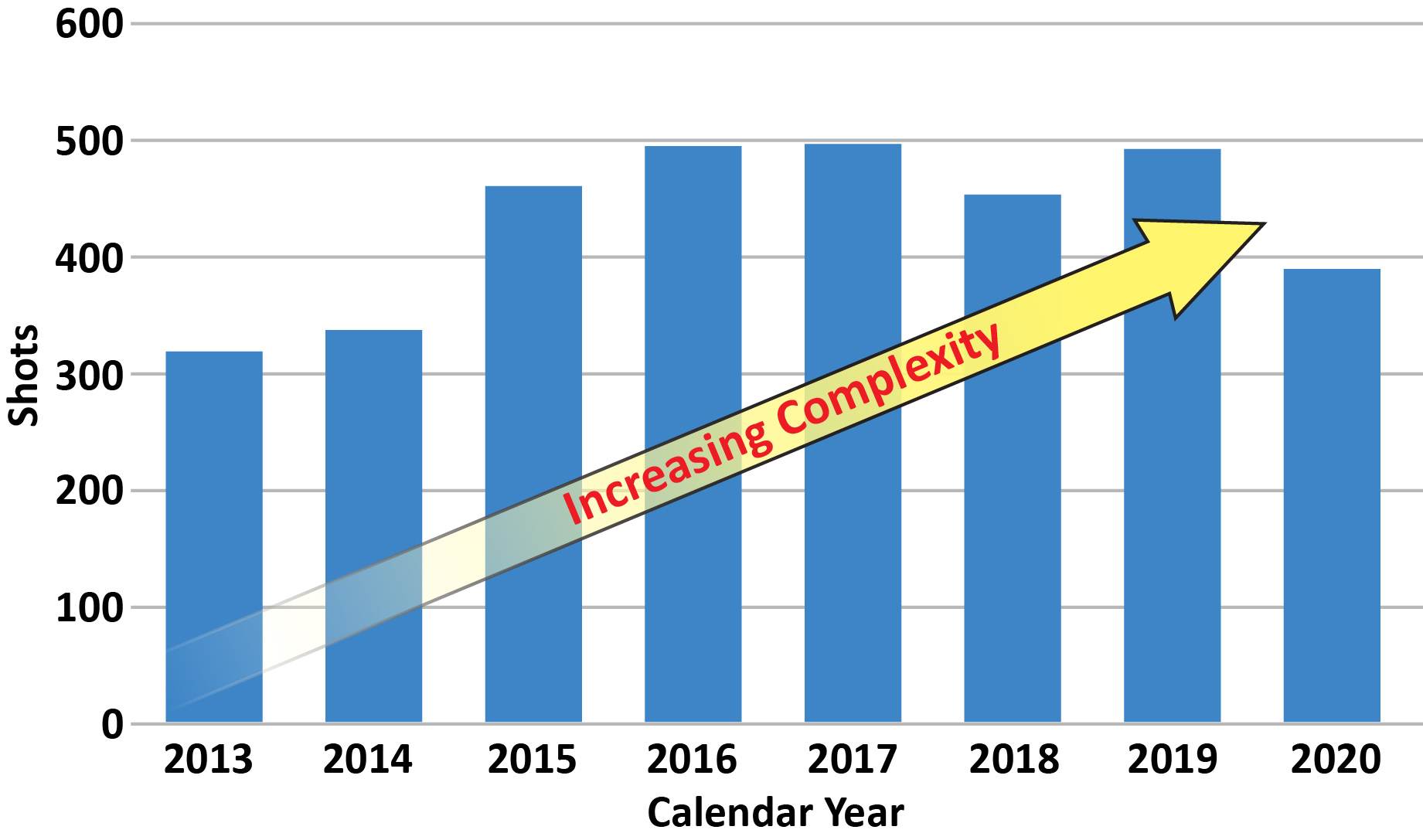 Graph showing targets produced by calendar year; 2020 production was impacted by the pandemic shutdown. (click to enlarge).
A robot is used to qualify and burn holes in the tents that suspend the target capsule, and automated systems are used to image the capsule surface and perform cryogenic leak tests on the assembled targets.

These and other efficiency improvements reduced the average fabrication time for cryogenic targets from almost 100 hours per target in 2013 to 83 hours at the beginning of 2015. By the end of 2016, that average was down to 55 hours.

Despite the challenges of designing, manufacturing, and testing a constant stream of these complex targets, the Target Fabrication Team and its partners at General Atomics, Gryphon Schafer, Los Alamos National Laboratory, and the UK’s Atomic Weapons Establishment have consistently increased production to keep pace with NIF’s steadily rising shot rate.

The increasing complexity of NIF targets is illustrated by the difference between a pre-2010 “cocktail” hohlraum made of uranium and gold multilayers (left) and the unique “double-backlighter” target fabricated in 2019 for an Advanced Radiographic Capability (ARC) experiment on the right. The ARC target uses two backlighters and a precise separation of the NIF ARC beams in both time and space to obtain two separate time-resolved radiographs of a target. 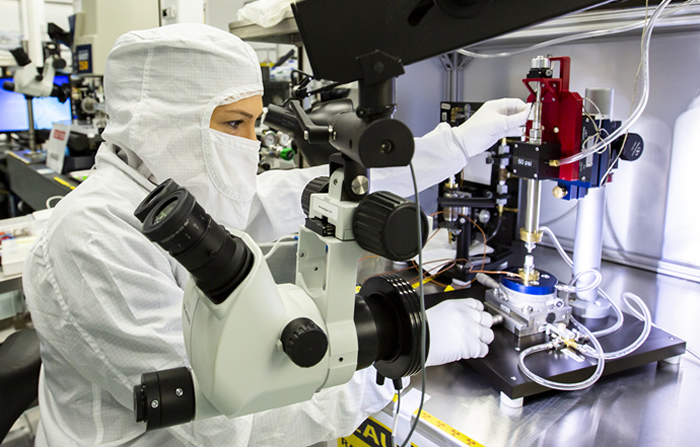 Target Assembler Jeana Bigelow-Granillo assembles a planar physics package for the TARDIS (Target Diffraction In-situ) experimental system, which is part of the NIF material strength campaign supporting the National Nuclear Security Administration’s Stockpile Stewardship Program. The planar physics package assemblies for these systems consist of up to five layers that require 0.5- to 1.5-micron epoxy thicknesses, which drives very low surface finish on the parts, and less than 1-micron parallelism between them. 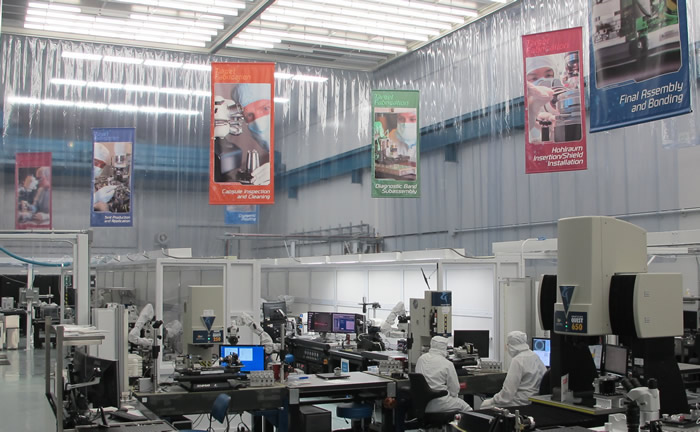 The 3,000-square-foot target fabrication facility in Bldg. 381 is a “class 100” cleanroom, allowing the entire NIF cryo target assembly process to take place in a clean environment. The overhead banners mark the stages in the assembly process.