In the classic BBC science-fiction series “Dr. Who,” the TARDIS (Time and Relative Dimension in Space) is a police call box that lets Dr. Who and his companions travel through time and space. The National Ignition Facility has its own TARDIS—an experimental system known as Target Diffraction In-Situ—that researchers plan to use for “visits” to giant planets in the far reaches of space, as well as to help counter the effects of time on critical nuclear weapon components.

As an element of NIF’s high energy density science program, TARDIS will provide important information on the characteristics of materials used in nuclear weapons as they age or are subjected to the immense pressures and temperatures of a thermonuclear explosion. By providing experimental data to compare to computer models of SSP-relevant material behavior, TARDIS is helping ensure the safety, security, and reliability of the U.S. nuclear deterrent without full-scale testing (see NIF and Stockpile Stewardship).

(Left) The NIF TARDIS package containing the material sample, the x-ray source target on a stalk, and the image plates to capture the x-ray diffraction cones inside the hemispherical cartridge. (Right) Diffraction data obtained during a November 2014 experiment in which a lead sample was compressed to about 3.5 Mbar. TARDIS is the first project to include a NIF target and diagnostic on a single, integrated platform.

For Discovery Science—specifically, astrophysics and material science—the TARDIS x-ray diffraction diagnostic is designed to shed light on the phase changes, or structural transitions between states of matter, that occur in materials under pressures and temperatures comparable to those believed to exist in the cores of “super-Earth” extrasolar planets (three to 20 times more massive than Earth). Researchers will be able to quantify the change in the materials’ crystal structure as a function of applied pressure, providing clues to planet formation and structure as well as to the exotic behavior of materials at high densities.

Familiar examples of phase changes include the transition of water to ice at low temperature and to steam at high temperature, and the creation of diamonds from carbon-containing minerals undergoing billions of years of intense temperatures and pressures far beneath the Earth’s surface.

But what happens when diamond itself is subjected to pressures inside giant planets that are many times greater than the pressure at the center of the Earth?

To answer that question, a team of researchers led by Raymond Jeanloz from the University of California at Berkeley and Tom Duffy from Princeton University, building on earlier experiments on the OMEGA Laser Facility at the University of Rochester, has used NIF’s powerful lasers to ramp-compress diamond samples to a record pressure of five terapascals (TPa), equivalent to 50 million Earth atmospheres (50 Mbar). That’s 15 times the pressure at the center of the Earth and comparable to the pressures at the center of Jupiter and Saturn.

A report on the research was the cover article in the July 17 issue of the journal Nature*; also see Experimental Highlights, July 2014. Other NIF extreme-compression experiments have shown the ability to compress solid iron and tantalum to nearly 10 Mbar.

“With NIF you can control the energy of the beams as a function of time,” said LLNL physicist Jon Eggert, “so we ramp-compress the sample slowly over time. Unlike shock compression, ramp compression keeps sample temperatures low and allows the study of matter compressed to extreme densities. Utilizing the precise laser pulse shaping on NIF, we can compress our samples to high pressures and relatively low temperatures, keeping the material in the solid state at extreme levels of compression found within the cores of giant planets.”

In the TARDIS experiments, a sample is ramp-compressed and probed with diffracted x-rays from an x-ray source foil, and the crystal spectrography diffraction lines are recorded onto image plates. The results from these shots will demonstrate that dynamic phase transitions can be studied in a wide variety of materials, such as carbon, lead, tantalum and uranium. 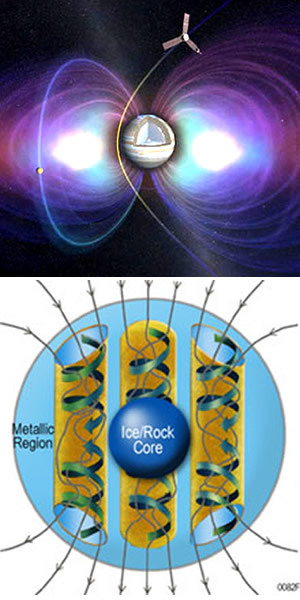 “In situ means that we do the diffraction while we have the sample at high pressure, as opposed to looking at it afterward,” Eggert said. “If we do it afterward, we don’t know when the changes took place. We want to ramp-compress the sample and hold it at a constant pressure, temperature and density while taking a snapshot of its crystal structure.”

The TARDIS experiments to date have been designed to ensure that they will produce good data—which they have—and the shots also have overcome a major challenge: controlling the temperature near the sample so it doesn’t melt before the desired pressures are reached.

“Temperature is a very difficult thing to get a handle on, especially in ramp compression,” Eggert said. “The temperature reached in the ablation plasma is comparable to near the center of the sun, and the sample is only 100 microns away from the plasma. The hot ablation plasma also emits radiation, so we use a gold pre-heat layer to absorb the x rays. Another source of heating is the x-ray source, which is generating monochromatic x rays. In the diffraction images we can see that lead is still solid even with all that pressure and temperature.”

Astrophysics experiments so far have focused on carbon, the fourth most abundant element in the cosmos. “We want to look at the high-carbon-content planets,” Eggert said. “It’s possible there are some carbon exoplanets with magnetic fields,” important because magnetic fields can protect life forms by deflecting the harmful charged particles in cosmic rays.

The researchers also want to apply ramp compression to examine other materials relevant to planetary interiors, such as iron. Iron’s compressibility and crystal structure are of interest because supermassive planets are expected to have an iron core.

The magnetic field on Earth is generated as convection currents in the liquid iron outer core are twisted by the planet’s spin; a planet with only a solid core may not have a magnetic field, and thus be unlikely to harbor life. “So we want to determine if iron will be liquid on giant exoplanets,” Eggert said. LLNL researcher Rick Kraus has proposed using TARDIS to study the “melt line” of iron. “We would shock-melt iron at 2.5 megabar and ramp from there to re-cross at the solid phase,” Eggert said, “and probe where the melt line occurs at very high pressure. We need to concentrate on that; knowing the interior structure of those planets is very important.”

In 2009, an experiment at Sandia National Laboratories in New Mexico hinted at the existence of a theoretical solid state of carbon called BC8. Next year a team of scientists led by Eggert and Justin Wark of the University of Oxford plans to use TARDIS to look for evidence of a phase transition from diamond to BC8.

“When you go from diamond to BC8 you have to break and rearrange the atomic bonds,” Eggert said, “and it’s difficult to jump over that barrier. We’re proposing to go to the SC1 state, which has a lower energy barrier, and then back down to BC8. This coming spring we’ll look for the stability phase of BC8; we’ll try to get up to the simple cubic phase (SC1) and then see if we can come back down to BC8. If we succeed, this will be a new phase of carbon to add to the many phases already known or recently discovered, such as graphite, nanotubes, Fullerines, and graphene. 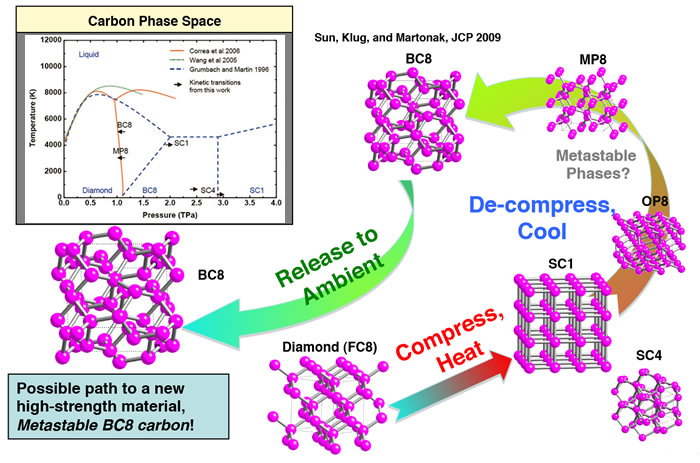 Theoretical calculations predict that at ultrahigh pressure, carbon will undergo several phase transitions. One of these phases, BC8, is thought to have similar atomic bonding as that found in diamond.

“BC8 is thought to be as hard as or harder than diamond and it may be even tougher than diamond, with less of a tendency to break apart under stress,” he said. “If the BC8 phase is metastable (not inclined to break down) at standard temperature and pressure and can be recovered, it holds potential for enormous technological impact.”