Fourth in a series of articles describing the elements of the National Ignition Facility’s 1.3-megajoule experiment.


Among the factors contributing to the National Ignition Facility (NIF)’s record-smashing 1.3-megajoule (MJ) energy-yield shot on Aug. 8, 2021—along with an innovative experimental design and advances in diagnostics, modeling, and laser precision—was the quality of the high-density carbon (HDC), or diamond, target capsule used in the experiment. 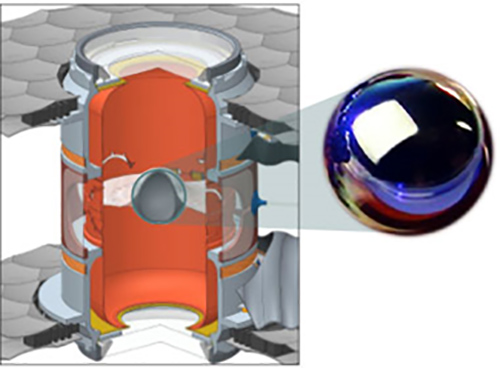 In terms of surface and internal defects and unwanted contamination, “this was the best diamond capsule they (the researchers) ever shot,” said NIF & Photon Science Target Fabrication Program Manager Abbas Nikroo. “How much that was a player versus the changes that were made from a physics point of view, that’s something that we’re going to be piecing together for some time to come.”

The capsule had 10 times fewer surface holes, or pits, and subsurface voids, as well as fewer contaminating high-Z (high atomic number) inclusions, than the capsule used in NIF’s previous record-energy experiment in February 2021, which produced only one-eighth the energy of the August shot. The capsule defects were thought to substantially contribute to the amount of capsule material mixing into the imploding fuel, preventing it from being compressed properly and reducing the hot-spot fusion rate below that required for ignition. Mix has been one of the most important factors preventing NIF’s goal of ignition from being reached; ICF researchers estimate that hot-spot mix can reduce energy yield by 40 percent, and sometimes much more, on many shots.

Developing the high-quality capsule was a multiyear challenge for the Lawrence Livermore National Laboratory (LLNL) Target Fabrication Team working in close collaboration with General Atomics (GA) of San Diego and Diamond Materials of Freiburg, Germany. “That work is not only focused on making the material better,” said LLNL chemist Michael Stadermann, deputy program manager for Target Fabrication, “but also on being able to measure the imperfections better so we can quantify the improvements.”

The team received a boost from the metrology expertise of LLNL’s optics and materials science researchers, who have spent the past decade developing techniques to eliminate flaws in NIF’s optics so they can withstand the intense energy of the facility’s 192 powerful lasers.

Along with the capsule, two other target-related factors played important roles in the August experiment:

(Left) The five-micron fill tube used in the Feb. 7, 2021, experiment (an average human hair is about 70 microns in diameter). (Right) The two-micron tube used on Aug. 8. The thinner tubes are challenging to fabricate and extremely fragile, as shown by the bend that develops as the capsule cools.

The use of synthetic diamond capsules, produced by a process called plasma-assisted chemical vapor deposition (PACVD), was first proposed by LLNL scientists more than a decade ago. They came into routine use on NIF in the mid-2010s as ICF researchers searched for ways to improve on the disappointing performance of early experiments that used polymer (CH) capsules. Simulations led researchers to conclude that diamond, with its higher density, had the potential to outperform other target materials in terms of energy efficiency and implosion stability, thus making ignition more likely. 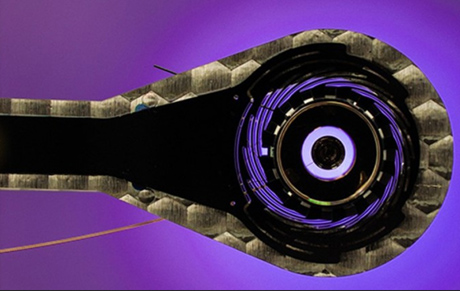 A diamond capsule inside a NIF hohlraum. Simulations highlighted the advantages of short laser pulse lengths for maintaining symmetric x-ray drive conditions, as well as the importance of efficient energy coupling from the hohlraum to the capsule. Diamond capsules were best at meeting these requirements. Credit: Rob Acree

While the early diamond capsules performed well, problems arose when researchers requested larger capsules for the series of “hybrid” (high-yield big-radius implosion design) experiments that began in 2017. “We were surprised right away by the capsule quality when we scaled those capsules up,” said Hurricane. “The quality degraded severely, and that was a shock to everybody.

“What we want is a perfectly smooth, or nearly perfectly smooth capsule, but instead we got something that looks like the surface of the moon. And through the thickness of the capsules we have voids, so it’s a porous or Swiss cheese-like material, rather than a solid material. All of those imperfections are seeds for instability.”

“The first problem we had,” Stadermann said, “was that we didn’t really understand what the problem looked like. Pits were always there, but we got those to a greater degree in those newer shells. We initially saw big voids—they were plainly visible in the radiographs—and so we got rid of them. Then we saw smaller voids, and those were much harder to quantify.”

The team set about developing new measurement methods to improve their knowledge of the size, extent, and location of the defects. Target Fab Team member Tom Braun enlisted the help of NIF & Photon Science researcher Laura Mascio Kegelmeyer and her team, who had pioneered an automated technique for finding imperfections in NIF optics, to create a software algorithm for locating voids much more quickly and accurately than by manually inspecting a stack of thousands of images.

“It was like a Sherlock Holmes mystery. It took a long time to understand where those problems were coming from.”

To overcome the limitations of standard measurement techniques that sample only small areas of the capsule at a time and could miss large pits and voids in other areas, researcher Haibo Huang and his team at GA developed a new scanning technique called digital holographic microscopy that allows high-speed 3D surface imaging.

“A single big pit or a single big void is much worse than a bunch of smaller ones,” Stadermann said. “So the question was, ‘How do we map the entire surface?’ This holographic microscope allows us to scan a full shell in 30 minutes. With confocal microscopy, that would take five days.”

At about the same time the team discovered a way for mitigating the pits “almost by accident,” he said. While investigating the source of the pits with Diamond Materials, “we learned that if you put a thin layer of fresh diamond onto the polished surface, you actually get a very clean surface.” The Target Fab S&T team continued to work with Diamond Materials to mitigate surface and bulk defects while expanding the range and concentration of dopant materials.

(Left) Target Fabrication S&T Team members Tom Braun and Chantel Aracne-Ruddle with a PACVD diamond coater developed by Diamond Materials. (Right) The purple glow of the plasma is visible in the viewing port of the polishing chamber. The shells are lapped and polished to achieve the desired ablator thickness and surface quality.

In a collaboration with Rockwell International Professor Satish Bukkapatnam at Texas A&M University, the team also employed new metrology instruments that use MEMS (micro-electromechanical system) vibration sensing methods to detect specific anomalies in the polishing process. Then they worked to address the root causes of the anomalies through process innovations. 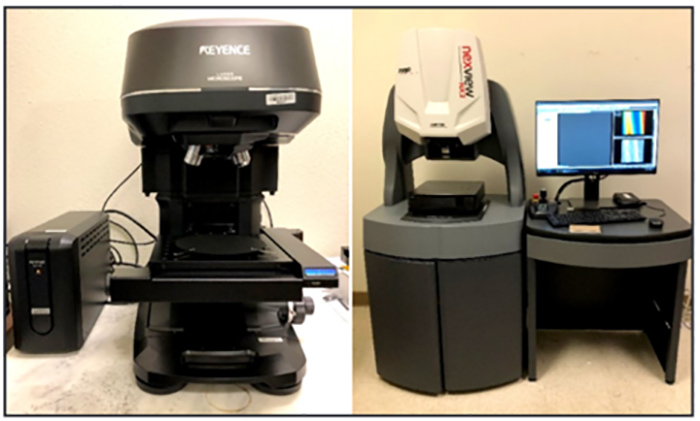 Two new metrology instruments, the Keyence VK-X1000 (left) and the Zygo NexView NX2 (right), were installed in the Target Fabrication S&T labs in the spring of 2020.

Along with the defects, Hybrid-E team member Dan Casey and his colleagues found that thickness non-uniformities can cause 3D asymmetries that rob energy from the capsule’s central hot spot. There have also been problems injecting the correct amount of tungsten dopant into the shell, and “dopant variability can exacerbate hydrodynamic instability,” Hurricane said.

“It was like a Sherlock Holmes mystery,” he said. “It took a long time to understand where those problems were coming from. A lot of investigation has to go on to identify and understand the problems, propose solutions, test those solutions, and find the solutions that work. Sometimes you get lucky—the first thing you try works. But more often than not, you don’t luck out on the first try.”

The team also spent months trying to determine the optimal grain structure in the diamond material. At first, microcrystal diamond, with larger, micron-scale crystals, had fewer defects than nanocrystal material but was more difficult to inject with dopant. A breakthrough came after several Target Fab team members identified an issue in the coating process during a visit to Diamond Materials. Materials chemist Juergen Biener, an originator of the diamond capsule concept, then devised an innovative solution that led to high-quality nanocrystal capsules.

“That worked spectacularly well,” Stadermann said. “We were hoping to get nanocrystalline material as good as microcrystalline, but it was actually much better.”

The team started making capsules with the new process in December 2020, and the first one was used in the Aug. 8 Hybrid-E experiment. It wasn’t perfect; the shell still had a few hundred small pits and about 100 small voids—but still was nearly 100 times better than the capsules produced two years ago. Capsule thickness issues contributed to a small amount of Mode 1 asymmetry (hot-spot drift), but “average capsule uniformity has also been improved to what may be a practical lower limit of about 200 nanometers,” Nikroo said. “Some of the batches used in the last two years were as large as 1,000 nanometers and exhibited what seems to be a clear (asymmetry) effect.

“The measurement technique was improved to ascertain this non-uniformity with greater precision and accuracy of less than 100 nanometers,” he added, “also due to the efforts of Haibo Huang and colleagues at GA.”

The Downside of Diamond

Despite the success of the 1.3-MJ record shot, diamond may not turn out to be the capsule material that propels NIF the rest of the way to its goal of ignition—when an experiment produces as much or more fusion energy than the amount of laser energy delivered to the target (about 1.9 MJ in ignition experiments).

Because of their crystalline structure, diamond capsules are more prone to seeding hydrodynamic instabilities during implosions, Hurricane said. “That forces us to create a pulse shape that hits the capsule with a very strong first (laser) shot to try to melt all of that crystal structure before the implosion really takes off, which alleviates some of the instability seeds.”

The strong first shock reduces instabilities but increases the fusion fuel’s adiabat (resistance to compression). “Because we have instability problems, we are living with higher adiabat, and it’s working out okay,” Hurricane said. “But we would like to go to a lower adiabat eventually, and diamond (unlike CH, with its amorphous structure) does have a floor on how low of an adiabat we can go to because we need that strong first shock. Each of these ablators have their own pros and cons, and we were just trying to find any combination that works.”

Hoping to find alternatives to diamond that could enable a lower adiabat, researchers are now studying amorphous ablator materials with good density, such as diamond-like high-density carbon, boron, and boron carbide. Experiments also are underway to assess the potential of alternative hohlraum designs, such as the I-Raum and Frustraum, that show promise of coupling additional energy to the target capsule.

“The Shape of Things to Come,” Science & Technology Review, July, 2020