The two ATPS stations are the final stages of preparing NIF targets before they’re sent to the NIF Target Bay for use in experiments. The system checks the seals on the targets for leaks, performs functional tests of temperature sensors and heaters, and verifies that hohlraum and target capsule pressures and temperatures meet the experimental requirements. The system performs final tests on both cryogenic and room-temperature targets and logs the data it collects to aid troubleshooting if something goes awry.

“The old manual system required a person to sit at a station and manually check all the valves and pressures for leaks, requiring about 11 effort hours per target,” said Target Fabrication Production Manager Ethan Alger. “With the ATPS that’s down to three hours per target. Instead of taking one and a half days per person per machine, one person can now get two targets done in a day, and also have time to work on other things.” 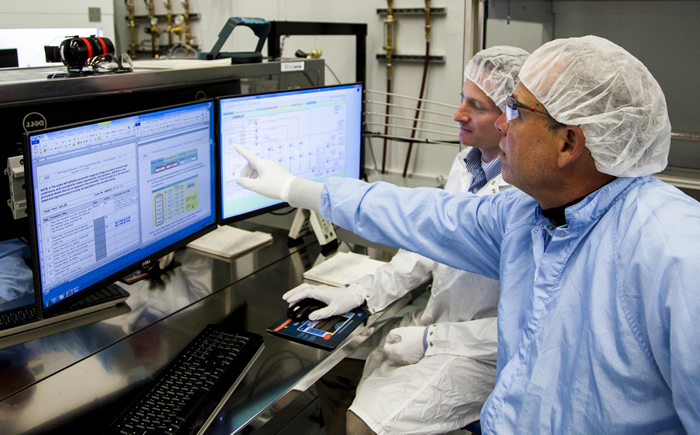 “By removing a bottleneck, ATPS has given Target Fabrication increased capacity, saving about 10 percent of the total time to assemble and test a new target,” said process engineer Hans Truax. “Once an operator has started the system, he or she can turn to new processes.” An example of new target assembly capabilities made possible by the increased efficiency of ATPS include x-ray radiography of an assembled target, which can check for debris in the target, provide information on the capsule’s position inside the hohlraum, and test for plugs in diamond capsules which would prevent fuel from entering through the fill tube.

Another advantage of the ATPS over the manual system, Alger said, is the new system’s ability to automatically control the rate of pressure change in the target. Adjusting pressure change by hand introduced the potential for human error. “The target is very sensitive and the gas flow rate and pressure must be limited,” Alger said. “With ATPS you’re less likely to have a pressure difference that could damage the target.”