NIF’s ability to rapidly resume operations following the Bay Area pandemic shutdown in March 2020 was an important factor in LLNL’s receipt of an overall rating of excellent in the National Nuclear Security Administration (NNSA) Fiscal Year 2020 Performance Evaluation Report. And the Target Fabrication Team’s efforts to quickly resume production of targets was a key to that timely restart of NIF experiments.

Less than three weeks after the shelter-in-place orders took effect on March 17 and the Laboratory went into Minimal Safe Operations mode, team members were back on site to conduct a “prestart” with NIF; they carried out a dry run the following week.

“Within about a week and a half,” said Target Fabrication Manager Abbas Nikroo, “we had all the people on site that we wanted to have to do the labor.” On-site hands-on target assembly work resumed at a 50-percent level on April 27 as new protocols were put in place to ensure the team’s safety, enabling a rapid and safe ramp-up to full production. 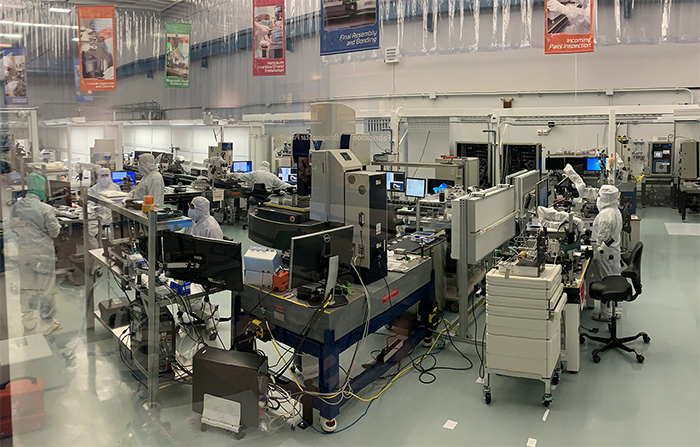 The full team of target assemblers working on targets last April in the class 100 cleanroom in Bldg. 381.

Component coating, laser cutting, and diamond coater operations in Bldg. 298, precision machining in Bldg. 432, and precision assembly in Bldg. 381 all smoothly ramped up production by the end of April. NIF fired its first shot following the shutdown on April 26, one of a series of important experiments for NNSA’s Stockpile Stewardship Program. 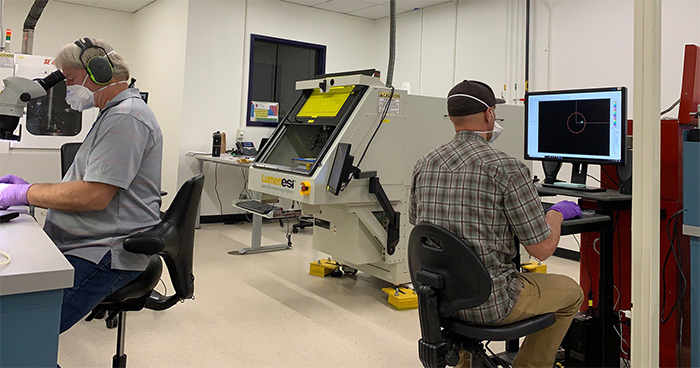 Other Target Fab operations, like the laser cutting shown here, ramped up to near-full staff while observing social distancing with proper PPE.

“I knew there were a lot of machining, assembly, and metrology operations required to make a NIF target,” said NIF Director Doug Larson, “but the complexity was never so obvious as when the team had to go through them all one-by-one and develop COVID-safe restart procedures. The team did an incredible job, all the way down to how they entered the building to start work each day.”

Even while the target assembly team was telecommuting during Minimal Safe Operations, the team put the downtime to good use, catching up on procedures, process improvements, photo documentation, and training that had been postponed due to the press of other priorities. Nikroo credited NIF Information Technology’s Lito Ison with working nonstop for two days to encrypt 35 laptop computers for the assemblers to use offsite.

“My major concern (during the restart) was actually twofold,” Nikroo said. “Touch labor, the people who do the hands-on work, have to be at the job site for us to continue making targets. So we had to make sure that as they came on site, the work could be done safely given the COVID situation, and also make sure that COVID precautions did not present any safety hazards, given the usual hazards involved in the work regardless of COVID—so that some kind of COVID PPE (personal protective equipment) did not lead to folks doing things in a way that would be not safe otherwise.”

In addition, faced with shortages of N95 respirators, hand sanitizers, disinfecting wipes, and other PPE needed by target assemblers and supervisors working in close proximity, the Target Fab managers decided to authorize telecommuting for engineers and other team members who could work from home.

“Those were the practical challenges,” Nikroo said, “trying to find PPE and making sure only the people that really needed to be on site were on site. And we still needed to make sure the people who were offsite could support the fabrication process properly.”

Among the protocols established to ensure protection from the virus was establishing supermarket-style lines to control entry into the 3,000-square-foot cleanroom in Bldg. 381. “An observer had them come in, wash their hands, go through gown-up, and move the line forward one step at a time,” Nikroo said. “We could get 15 to 20 people in within about half an hour, but make sure that we had the separation.”

Lines on the floor marked zones around the instruments where only one person at a time was permitted. “I really liken it to radiation (protocols),” Nikroo said. “Minimize the (exposure) time, increase the distance, and then use PPEs as protection. Virus protection is very, very similar to that.”

Nikroo acknowledged the difficulties of working under pandemic conditions and said employees were encouraged to take breaks when needed; he also insisted, however, on strict compliance with the protocols. “I wanted to make sure people understood that they needed to behave collaboratively and work more as a team to help correct each other.

“It’s just like any other kind of safety protocol; if you can’t abide by it you can’t be working,” he said. “It really depended on people and their supervisors working together to make sure that they paid attention. But everybody stepped up; we don’t really have any issues. In fact, many have commented that they feel safer at work than out in the community, thanks to the COVID protocols.”

Nikroo noted that target production was “a bit lower” at first, with the engineers telecommuting and coming to the Lab only when their presence was needed to work with an assembler or machinist on one of their targets.

“Once we got comfortable with the experience,” he said, “we allowed the engineers to come on site more often as needed, and then asked them to be on site at least 50 percent starting in early September. Some come a little more, but no one comes less than 50 percent. And that’s worked out really well. I think everybody has really liked it, because people were just getting tired of being at home.”

Earlier in This Series: