NIF researchers are optimistic that results from the initial tests of the novel angular-shaped hohlraum could create more promising paths forward for ICF research efforts. 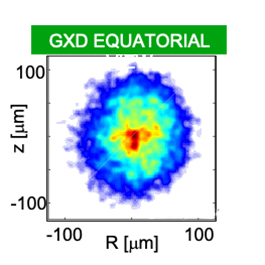 This visualization of an implosion comes from data from a January Frustraum hohlraum experiment. Credit: Arthur Pak

“Considering that we’re trying to develop a new platform with all of its potential pitfalls, we were very elated over how things started off after these first two full-energy shots,” said Peter Amendt, the Frustraum’s designer. “We’ve had good core symmetry, good neutron performance, no backscatter, high energy coupling – all the boxes got checked.”

The Frustraum campaign is in its early stages, but physicist Vladimir Smalyuk said he hopes continued success “would open up doors to new designs. The more energy coupled means we don’t have to build a bigger NIF.”

The Frustraum campaign is part of the Disruptive Proposal Initiative (DPI), recently introduced within the ICF program at NIF to promote new ideas and approaches toward ignition that can change the direction of the ICF program. The main goal of the Frustraum project is the significant increase of the energy coupled to the capsule, by a factor of two to three, compared to existing designs. While this goal is challenging, it may open very attractive paths toward ignition, if successful.

Steven Ross, the lead experimentalist for the full-scale Frustraum campaign, said he was initially skeptical about how well the new design would perform.

“It’s very different than what we’ve been fielding for the last five years on NIF,” Ross said. “You never trust anything that the simulation says until you can compare it to some experimental data. This was really the first chance to do that and say, ‘Oh wow, this is working great.’ There is a path forward here that could be very, very exciting.”

For a shot in February, the researchers changed the position of the Frustraum’s outer cones - where the outer laser beams hit the hohlraum wall - by a couple of hundred microns to try to achieve big increases in prolateness. 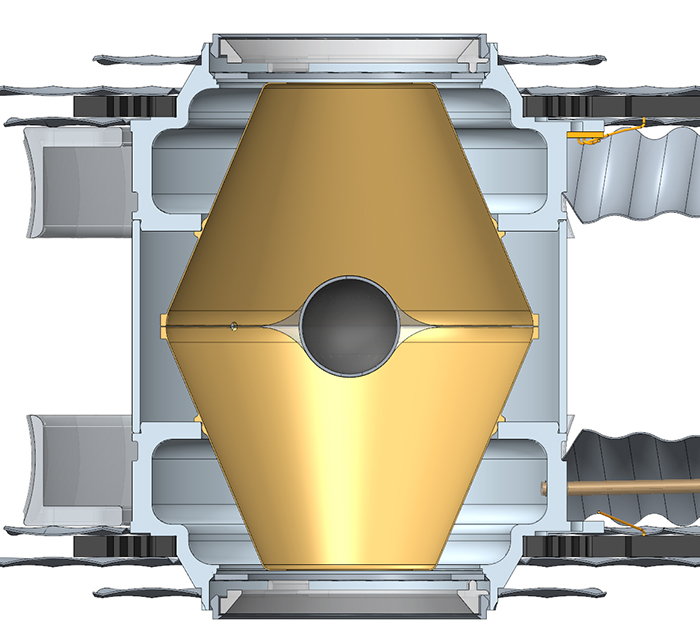 The Frustraum’s design takes two identical truncated cones and joins them at their widest portion in the middle (see “Frustraum Hohlraum Design is Shaping Up”). Credit: Scott Vonhof (Click to expand)

“It came in pretty much as we expected without any deleterious consequences,” Amendt said. They can now use changing those outer-cone pointings to develop “a playbook for symmetry control.”

“Having a nearly round implosion really helps us benchmark the models much more accurately now, rather than being at some extreme distortion like we were seeing before with the early 2019 subscale Frustraum campaign,” he said.

In addition, the Frustraum has room to use 1,200-micron inner radius capsules, compared to the standard 1,000-micron capsules used for cylinder hohlraums. The larger capsule allows greater energy coupling efficiency.

Amendt said the shots showed a laser energy coupling efficiency rate of about 20 percent, or almost 270 kilojoules (KJ) out of 1.3 megajoules (MJ) of laser energy.

And researchers were surprised by the lack of “meteors” in the implosions, especially since they were using the first batch of larger capsules that came with many micron-scale features. “We were expecting a flood of meteors coming in on the images and we didn’t see any, which was a surprise,” Amendt said.

They aren’t sure why there were no meteors, but it might mean the inclined angles of the Frustraum produced less glint, or laser light, reflecting into the capsule.

One upcoming step is to move to a larger capsule of nearly 1,500-micron outer radius. “The bigger you make the capsule, the more energy it absorbs,” Ross said.

They also want to take incremental steps to use even more laser energy, from the current 1.3 MJ toward NIF’s full potential of 1.8 to 1.9 MJ.

“We’ll continue to push the laser energy and make sure the target behaves the way we expect it to,” Ross said.

The researchers also want to transition from a pure gold Frustraum to a hybrid using gold and depleted uranium, which they hope will also increase the energy coupling.

“When we get to energy of about 1.6 MJ, there’s always the worry that the backscatter is going to creep up and you have to adjust what you do based on to fighting with the backscatter,” Ross said. “But the symmetry control so far looks very optimistic and I personally thought that was going to be the most challenging part of this platform.”

The researchers are now analyzing a 1.6 MJ-shot with a gold-coated uranium Frustraum this month that attained a high-implosion velocity—about 400 kilometers per second—with 300 KJ of capsule energy coupling, while maintaining symmetry control and acceptable laser backscatter.

“We’re in the ballpark,” Amendt said.