Unlike its ill-fated namesake from Greek mythology, the Icarus camera system is flying high at NIF and other research laboratories, with no end to its usefulness in sight.

Icarus is an ultrafast multi-frame digital x-ray camera system developed at Sandia National Laboratories. It features a time-gated hybrid-CMOS (complementary metal oxide semiconductor) sensor that can take multiple snapshots of a NIF target heated by a laser pulse a few billionths of a second in duration.

And “thanks to great work by LLNL electronics technicians and engineers,” said plasma physicist Hui Chen, NIF’s Icarus-based camera system, called Icarus2, has been hardened against radiation so it can now be deployed during high-neutron-yield inertial confinement fusion (ICF) experiments. This enables researchers to capture a sequence of images that reveal hohlraum interactions during an ignition implosion with unprecedented resolution.

“In the push for ignition,” said Chen, “we want to understand what is happening in the hohlraum. The upgrade gives us wider coverage (in time); now for the first time we can see (the implosion) complete from beginning to end. And the quality of the image is just beautiful!”

Images of the interior of a NIF hohlraum during the progressive stages of a laser pulse. The first frame is an x-ray emission image during the picket, or first stage, captured by an upgraded gated laser entrance hole (G-LEH) diagnostic using the Icarus2 camera system. Subsequent images were taken during the pulse trough (low point), second “epoch,” rise to peak power, during peak power, and after the laser has turned off (stagnation). The last three frames show the growth of gold plasma “bubbles” that blow off from the walls of the hohlraum and interfere with x-ray energy distribution.

In a test experiment without fusion fuel earlier this summer, dual Icarus2 sensors were used in an upgraded gated laser entrance hole (G-LEH) diagnostic. The G-LEH captured the first detailed images of x-ray emissions throughout a NIF implosion, providing a sequence of images of the interior of the hohlraum as seen through the laser entrance holes in nanosecond timescales.

Until the gated sensor was made available in 2015, the NIF LEH imager had used a charge-coupled device (CCD) or a film as detectors that provided only time-integrated data over the whole laser pulse length.

The earlier version of the gated LEH imager used a prototype hybrid-CMOS sensor. By taking two time-resolved images per shot, it was an improvement over the previous static imagers that could capture only a single time-integrated image of the hohlraum interior. This, however, still required researchers to extrapolate the hohlraum dynamics occurring before and after the images. The upgraded instrument fielded this summer provides up to 8 time-gated images per sensor (16 images from the dual sensors) with much-improved flat field and dynamic range. 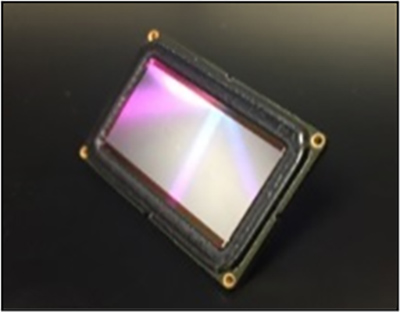 The Icarus sensor in the small-outline package.

In an ICF implosion, laser-generated x rays ablate, or blow off, the surface of a capsule suspended in a pencil eraser-sized gold cylinder (the hohlraum), causing a rocket-like implosion that compresses and heats the partially frozen deuterium and tritium (DT) fuel inside the capsule until the hydrogen atoms fuse and release energy—the same process that powers the sun and the stars.

The success of a NIF implosion—whether or not it’s able to reach the conditions needed for ignition—depends heavily on how well the laser pulses that strike the inner walls of the hohlraum are able to produce a symmetrical “bath” of x rays. An asymmetrical implosion limits the amount of energy absorbed by the capsule and thus the chances of achieving ignition (when the fusion reactions generate as much or more energy than the energy absorbed by the capsule).

While a number of factors, such as cross-beam energy transfer and laser instabilities, can disrupt x-ray symmetry, one of the most significant is the formation of growing “bubbles” of gold plasma blowing off from the hohlraum walls as they’re heated by the lasers. The plasma, a mixture of ions and free electrons, can narrow the LEH apertures and interact with the laser beams, causing uneven energy distribution that results in an asymmetric implosion. 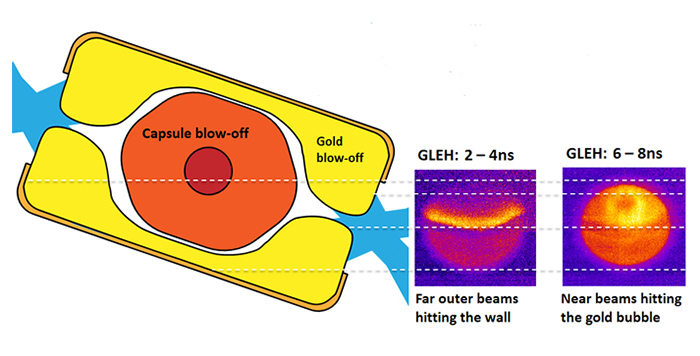 (Left) Illustration of the growth of gold bubbles truncating the laser entrance holes of a NIF hohlraum. (Right) Images taken by the previous G-LEH during a NIF shot using a near-vacuum hohlraum. (Click to expand.)

Icarus2 is the latest iteration in a series of ultrafast x-ray imagers developed over the last 15 years by Sandia’s Microsystems and Engineering Sciences Applications Complex. Sandia physicist John Porter led the effort to capture images of the plasma in Sandia’s Z pulsed-power facility, and NIF collaborators at General Atomics suggested to Chen, the G-LEH responsible scientist, that it might be a useful tool for NIF.

“Until now, it was not possible to ‘see’ inside the hohlraum in the high-neutron-yield DT shots,” Chen said. “An electronic sensor such as a CCD could be permanently damaged in such an environment.

“Livermore Engineering had the vision and put so many resources into this,” she said. “They developed the camera electronics to run the sensor in challenging radiation environments. We tested it on a very high neutron yield shot, and the sensor just behaved beautifully.

“Every little part has to work perfectly,” she said. “There was no prior data (to go on), so we were surprised it worked so well. It was great work by Livermore Electronics and Engineering.”

Chen and her colleagues are now analyzing the data obtained by the G-LEH and plan to compare the result with current computer models of hohlraum dynamics “to see if it agrees with the code. If not, then where and why not? And if it agrees,” she said, “what does that mean about the implosion? We will have a clear physics story.”

The need for the capabilities of Icarus and its predecessors was identified in the National Diagnostic Plan, developed annually since 2009 by technical experts from the national laboratories and academia. The plan coordinates efforts to develop a comprehensive suite of advanced diagnostics for ICF and other stockpile stewardship experiments at NIF and the other National Nuclear Security Administration (NNSA) laboratories.

The G-LEH is only one of several diagnostics using Icarus to analyze NIF implosions, with more applications to come.

The Icarus2 sensor is employed by the Target Diagnostics Team in conjunction with the single line of sight (SLOS) x-ray drift tube, a multiple-image-sequencing camera capable of recording high-quality x-ray images of NIF capsule implosions, each some 35 picoseconds (trillionths of a second) apart. Icarus is the “key enabling technology that allows SLOS to operate the way it does,” said LLNL diagnostics engineer Arthur Carpenter, the responsible system engineer for the SLOS camera.

Icarus is also used in a newly upgraded Precision Diagnostic System (PDS), a suite of diagnostics used to monitor the performance of a selected laser beamline before it enters the Target Bay. In the PDS, Icarus acquired the first time-resolved high-resolution beam profiles of ignition-type shots at NIF.

“This is the first time to our knowledge that we are doing spatial-temporal characterizations of fusion-class laser beams,” said LLNL research scientist Jean Michel Di Nicola, group leader of the NIF and Photon Science Laser Modeling and Analysis group. Using the Icarus detector, he said, “we were able to uncover the fact that the beam changes shape in the pulse. In 17 nanoseconds, the beam that starts fairly flat developed some kind of forms at the back end of the pulse. We’re taking pictures of the beam that is running at the speed of light.” 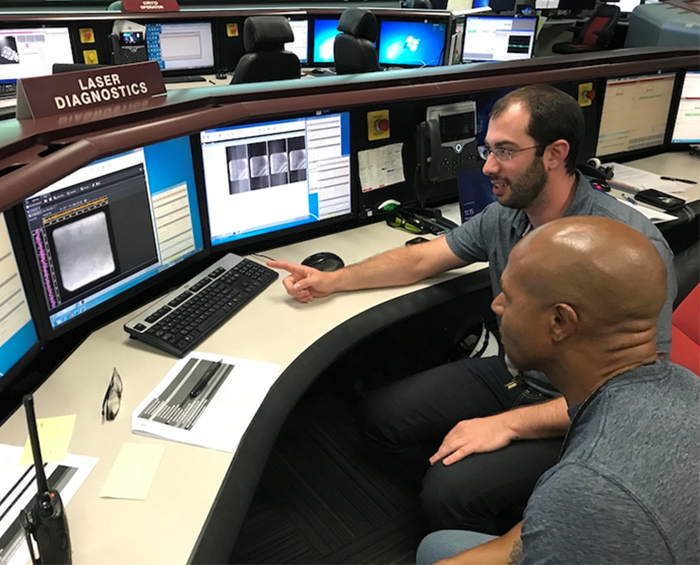 What’s more, LLNL and Sandia are far from the only labs taking advantage of Icarus’ state-of-the-art imaging capabilities. The camera is also used in a SLOS-TRXI (time-resolved x-ray imager) at the Omega Laser System at the University of Rochester; and a diagnostic similar to the G-LEH has been installed at the French Alternative Energy and Atomic Energy Commission (CEA)’s Laser Mégajoule, a NIF-like 22-beam ICF laser facility near Bordeaux, France. Carpenter said researchers at SLAC National Accelerator Laboratory also have expressed interest in the Icarus technology.

The development of Icarus, SLOS, and other next-generation imaging cameras was “exciting and inspirational,” Carpenter said. “The collaboration between LLNL, Sandia, General Atomics, and the other partners that we’ve tried to involve along the way is really fruitful and really successful. The key to the success has been the passionate people who work on it.”