Measuring NIF Implosions with a Bang

Improved understanding of implosion physics is essential for NIF to continue on the path to ignition. By obtaining precise measurements of the conditions in NIF implosions, such as shock and compression “bang time,” researchers can use the results to validate mathematical models of implosion dynamics.

Bang time is the moment of peak emission of the x rays, neutrons and protons produced during implosions. Implosions can have two bang times, the first produced by the imploding shocks, followed by a compression bang time. A new instrument for determining shock and compression bang time, the magnetic particle time-of-flight (magPTOF) diagnostic, was deployed on NIF this month. The magPTOF was developed in a collaboration between the Massachusetts Institute of Technology (MIT), the Laboratory for Laser Energetics (LLE) at the University of Rochester, and LLNL. 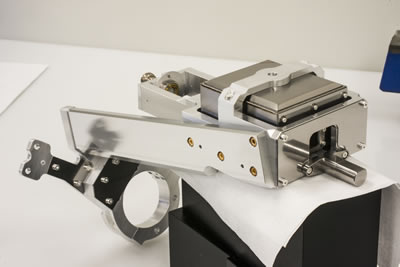 Shock burn, a brief period of fusion production during the shock collapse and rebound at the center of an inertial confinement fusion (ICF) implosion, is closely associated with the strength of the converging shocks. The rebounding shock striking the imploding fuel and capsule shell also initiates deceleration, which culminates in peak fuel compression and burn.

“Just as importantly,” Sio said, “the difference between the shock and compression bang time is an additional measurement that can be used to constrain physics models in the simulation code. One of the motivations for designing an instrument that can measure both shock and compression bang times is that while simulation shows that the difference between these two bang times is insensitive to changes in the experimental parameters, experimental evidence seems to suggest that this difference may be changing by as much as 50 percent.”

This measurement, in combination with shock-burn weighted areal density measurements from the wedge range filter proton spectrometer, will provide valuable new constraints on the one-dimensional physics of the shock propagation and shell deceleration, improving understanding of the in-flight conditions of the fuel and shell. 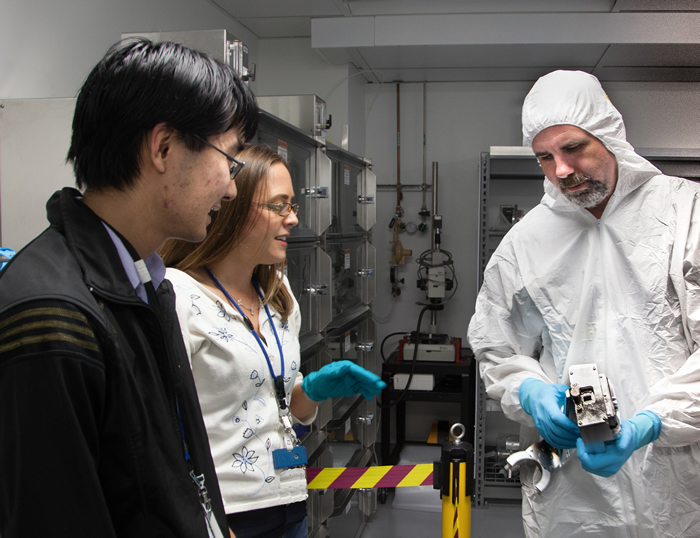 The magPTOF is an upgrade to the existing particle time-of-flight (pTOF) diagnostic, also designed and built by MIT, LLE and LLNL. Recent NIF-MIT PhD graduate Hans Rinderknecht was a leader in the development and analysis of the pTOF detector, and led the physics design of the magPTOF diagnostic along with Sio and MIT scientist Johan Frenje. The engineering design, fabrication, and assembly was led my Mark Bedzyk and Milt Shoup at LLE and LLNL’s Shannon Ayers, while the magnet was designed by Dexter Magnetic Technologies, Inc. The MIT/LEE/LLNL collaboration has developed several other important NIF diagnostics, such as the wedge range filters.

For more than five years, the pTOF has accurately measured bang times using neutrons produced by deuterium-deuterium (DD) and deuterium-tritium (DT) fusion reactions with a better than ±70-picosecond accuracy. For indirect-drive implosions with low hohlraum gas fill (near-vacuum hohlraums), pTOF also can measure the shock bang time from protons generated by hydrogen-helium (D3He) reactions because of the low x-ray background in this type of implosion.

In gas-filled indirect-drive implosions, however, a very high level of hard x rays is produced by the laser interacting with the plasma in the hohlraum. Although the bang time comes after the laser, the x-ray background still prevents the D3He-protons from being detected.

To expand the pTOF’s versatility, the magPTOF incorporates a thick tungsten filter to shield the detector from the high-energy x-rays generated by the hohlraum, and a small dipole magnet to deflect shock-generated D3He-protons around the shielding and onto a chemical vapor deposition (CVD)-diamond-based detector. This allows for the first time simultaneous measurements of D3He-protons and DD-neutrons produced at shock-burn and compression-burn in a variety of D3He surrogate target capsule implosions. The inclusion of the deflecting magnet increases the D3He-proton signal-to-background by a factor of 1,000.

“That’s where the magPTOF comes in,“ he said. “The design goal is to reduce the x-ray background enough so the CVD diamond detector can accurately measure the protons coming from the implosion.”

The magPTOF was fielded in its first full system shots on June 17 and 18 for a series of Discovery Science collisionless shock experiments. The three-shot “mini-campaign” was in support of a broad national and international academic collaboration involving MIT, the University of Chicago, UC San Diego, Stanford University, and participants from the United Kingdom and Japan. 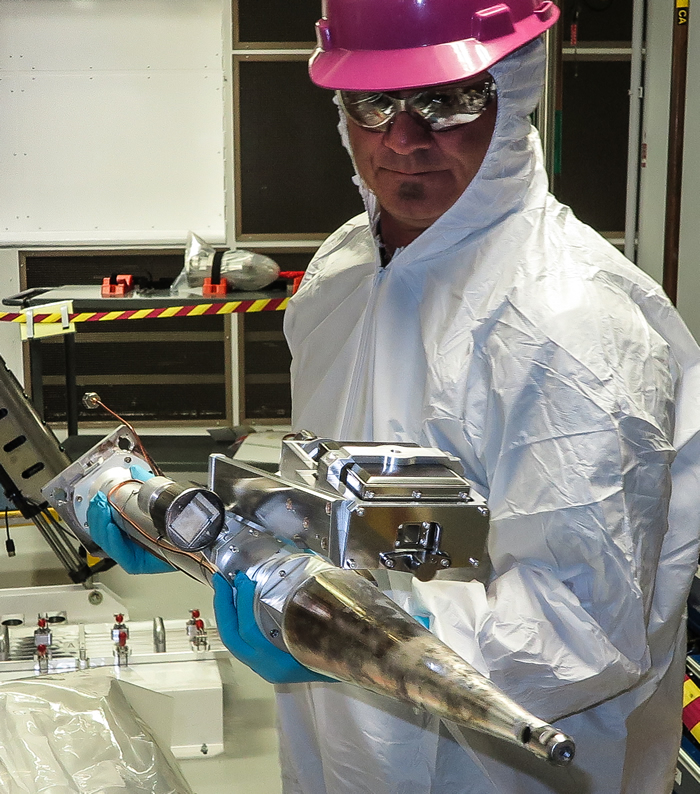 The smooth blue sphere of NIF’s Target Chamber bristles with diagnostics—nuclear, optical, and x-ray instruments that together provide some 300 channels for experimental data. These diagnostics provide vital information to help NIF scientists understand how well an experiment performed.

Two of these diagnostics, known as Dante 1 and Dante 2, are pressed into service for nearly every shot. These broadband, time-resolved x-ray spectrometers measure the time-dependent soft x-ray power produced by the NIF lasers interacting with the hohlraum—the small gold cylinder that holds the NIF target capsule. The x rays heat and ablate the outer surface of the capsule and drive the capsule’s rocket-like implosion. The resulting data are used to calculate the radiation spectrum and infer the temperature of the radiation field inside the hohlraum. This information can be directly compared to hohlraum simulations to determine if the hohlraum and laser pulse are performing as designed.

“Dante is one of the workhorse diagnostics of NIF—it participates in almost every shot,” said Alastair Moore, responsible scientist for Dante. “Even when a hohlraum is not used, it is one of the few absolutely calibrated soft x-ray diagnostics that can provide absolute measurements of the conversion efficiency of laser light into x rays.” 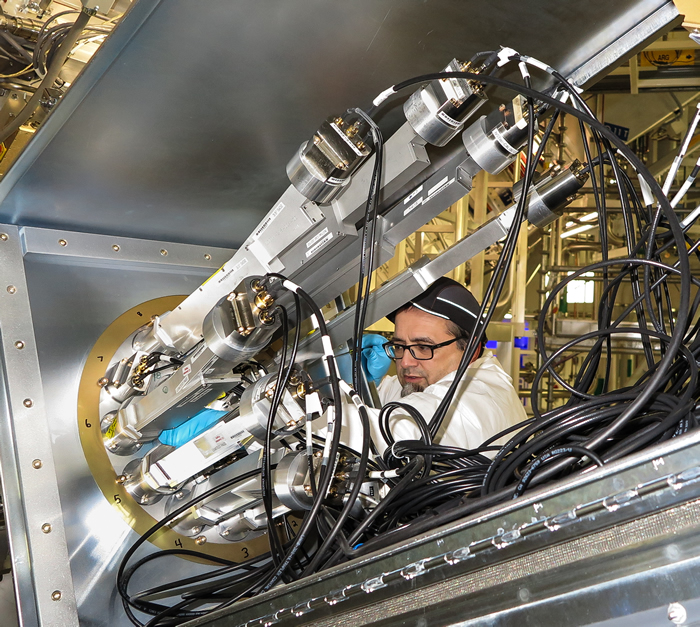 Each Dante diagnostic measures the voltage produced by 18 filtered x-ray diodes. Each diode is filtered to record the x-ray power in a specific part of the spectrum. Spectral ranges are controlled by filters, metallic mirrors, and x-ray diode material. Dante 1 has five channels with mirrors, and Dante 2 has eight mirrored channels.

Because Dante is an absolutely calibrated system, every component must be calibrated and tracked, making it one of the more challenging diagnostics to maintain and operate. According to Moore, the calibration of each component typically involves about 100 measurements.

“On the two Dante systems, we maintain approximately 10 different filter configurations, each of which contains about 45 calibrated filters,” he said. “The filters are pretty fragile components and debris from shots can damage them over time, requiring a continual replenishing of the stock of components.”

In addition to the filters, approximately 50 x-ray diodes are calibrated on a cyclical basis and maintained along with about 20 grazing incidence x-ray mirrors. This adds up to an inventory of thousands of components which must be tracked, maintained and verified. 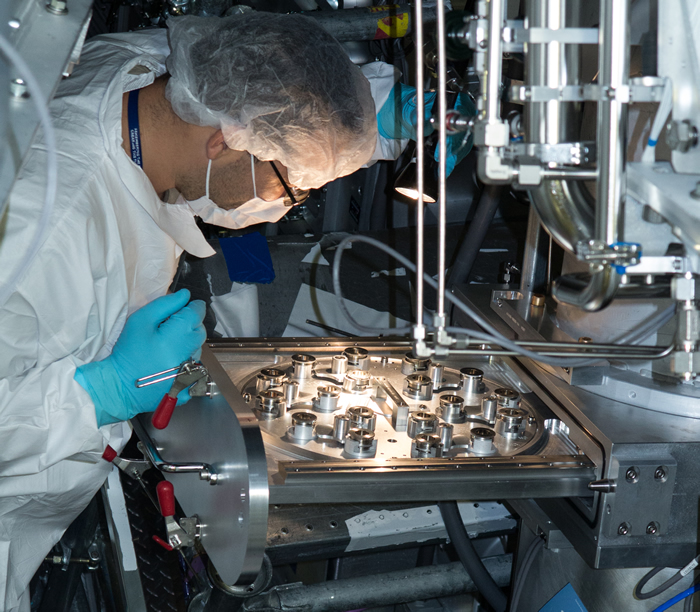 Target Area Operator Mike Morris inspects a Dante 1 filter wheel to ensure that all the extremely delicate filters are intact before a shot. Credit: James Pryatel

The Dante team recently transitioned to a new way of operating the diagnostic filter configurations, introducing standardized sets. This adaptation significantly reduced the overhead costs associated with building filter configurations and also reduced the error bars on the measurements, making better shot-to-shot comparisons possible. The team also is in the process of replacing the 18 oscilloscopes used to record the x-ray diode signals and automate the setup, reducing manual interactions required for each shot.

Looking to the future, the team is exploring a modification to some of the channels that measure the part of the spectrum containing M-band radiation from the hohlraum, an important measurement for inertial confinement fusion.

“This radiation can significantly preheat the capsule, resulting in an increase in instability growth,” Moore said. “The upgrade will add multi-layer x-ray mirrors to these channels to provide a better constrained x-ray bandpass and a more accurate measurement of the power in this region.”

The forerunner of the Dante diagnostic originated in the era of underground nuclear weapons testing, where it was developed for the same purpose as it is used today—to measure the absolute x-ray power produced. A multi-institutional team with members from Lawrence Livermore, Los Alamos and Sandia national laboratories, the UK’s Atomic Weapons Establishment, National Securities Technologies, and General Atomics contributed to adapting the diagnostic to its current use.