When a fast x-ray camera was successfully coupled to a sophisticated x-ray optic and mounted recently in NIF, it brought powerful new diagnostic capabilities to the world’s highest-energy laser system.

NIF now has what LLNL physicist Gareth Hall calls a “super camera,” with unprecedented diagnostics that include for the first time the ability to deliver multiple radiographs in sequence and higher-definition images later in time in the NIF implosion process. 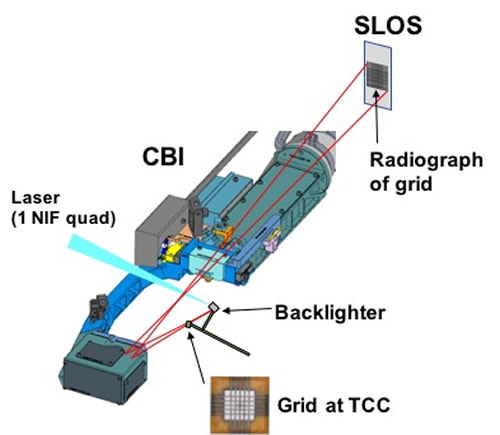 Diagram of NIF’s new super camera. The CBI wraps around the target at the center of the NIF Target Chamber (TCC) in a configuration one physicist likes to call “the world’s most sophisticated selfie stick.” Credit: Gareth Hall

“Now we’ve put them together and we’ve got something that has never been done in the world before. This is a world first,” said Hall, the responsible scientist on the project. Hall spent the last two years working on the team developing the CBI. Coupling the two diagnostics involved close coordination between the CBI and SLOS teams and involved researchers from LLNL, Sandia National Laboratories, General Atomics (GA), and the Laboratory for Laser Energetics (LLE) at the University of Rochester.

Physically, the coupled device resembles one of the ubiquitous pole-mounted cameras people use for self-portraits at tourist sites. The narrow, two-meter (6.5-foot)-long device holds an x-ray optic at the end of an arm that wraps around a target at the center of the NIF Target Chamber. There, however, all resemblance with a selfie stick ends. The x-ray optic is like a cross between a mirror and a lens, reflecting an image of the target back onto the camera sitting behind it.

The marriage of the two diagnostics is the equivalent of adding a highly sophisticated lens (the CBI) to a multiple-image-sequencing camera (SLOS) capable of recording higher-quality x-ray images than ever before, each some 100-200 picoseconds (trillionths of a second) apart. The CBI provides late-in-time monochromatic radiography of NIF capsules, allowing researchers to see clearer images of the last stages of implosions that previously were overwhelmed by the intense x-ray self-emission from the capsule.

“This is a great new capability, getting multiple ‘snapshots’ of an implosion, a bit like a movie,” Hall said. By being able to display an implosion in higher definition and in longer sequencing, researchers note, they can bring NIF closer to capturing moving images.

The super camera’s commissioning shot occurred in October, with four NIF beams delivering 23 kilojoules of ultraviolet energy and nine terawatts of laser power onto the backlighter. An additional 20 beams generated an x-ray source at the center of the NIF Target Chamber as a way to check how well the new diagnostic was aligned.

The experiment produced two high-resolution images 200 picoseconds apart. The new capabilities offered by the camera were so anticipated that when the data showing that the test had been successful appeared on computer screens only a minute after the shot, cheers and congratulations poured forth from many of the dozens of researchers watching the test.

The pole-mounted x-ray optic has the advantage of being monochromatic, reflecting only the desired wavelengths that make up the backlit image. This provides CBI with the ability to take images of the NIF capsule implosions late in time, when intense x-ray self-emission saturates other backlit imaging diagnostics. CBI is able to filter out the background clutter and block the blinding flash of the NIF implosion that bleaches out backlit images obtained by other diagnostics.

“That is the beauty of the super camera,” explains GA physicist Christine Krauland, a member of the development team. “It will allow researchers to see multiple clear images of the last stages of implosions that other techniques cannot provide. The combined diagnostic’s higher-quality multi-frame images can start to address late-time evolution questions that remain with ICF (inertial confinement fusion) scientists.”

The diagnostic can lead to deeper understanding of the implosion process, the researchers said, which is essential to achieving NIF’s goal of ignition—when the energy from a self-sustaining fusion reaction outstrips the rate at which x-ray radiation losses and electron conduction cool the implosion.

The marriage of two diagnostics brings the strengths of each component to the process of analyzing NIF implosions. CBI provides more detail in the images it produces. And with the new SLOS sensor available in the super camera, researchers now can obtain multiple radiographs from a crystal imager with sharper image clarity.

The SLOS technology is considered a transformational diagnostic under the National Nuclear Security Administration’s 2016 Inertial Confinement Fusion Program Framework. SLOS advances imaging methods by capturing multiple image frames on a single line of sight, all on a single shot of the NIF laser. Because the frames are gated in a timed sequence—capable of being spaced only a few hundred picoseconds apart—researchers say they will be able to focus on NIF implosions with never-before-seen views. SLOS also provides multiple images in fast sequence, like the automatic motor drive on a standard camera.

The combination of CBI and SLOS offers higher resolution imaging than previously available because it utilizes crystals to form images instead of the pinhole photographic imaging technology used in other NIF imaging devices. Using SLOS, the super camera can achieve shutter speeds as short as 35 picoseconds, faster than many previous x-ray cameras being fielded.

That clarity and speed of the dual diagnostic, coupled with the sequencing capability, provides a promising new tool for fusion research, scientists say. Already the next generation of the super camera technology is in the works, as researchers plan to double and even triple the number of frames that can be captured of a single implosion in sequence—delivering even more information about the physics of NIF implosions.

“People worked extremely hard to make this work,” said Hall. “It was very pleasing to see all that work pay off. It was why we do this—it gives you that adrenaline rush. Now we can go and look at experiments in a way we’ve never done, and that’s so exciting.”

The next big milestone for the super camera was on Jan. 15, when it was used in preparation for imaging a capsule implosion for the first time.

The team members working on the super camera included both the CBI and SLOS teams, along with NIF Operations Team members. 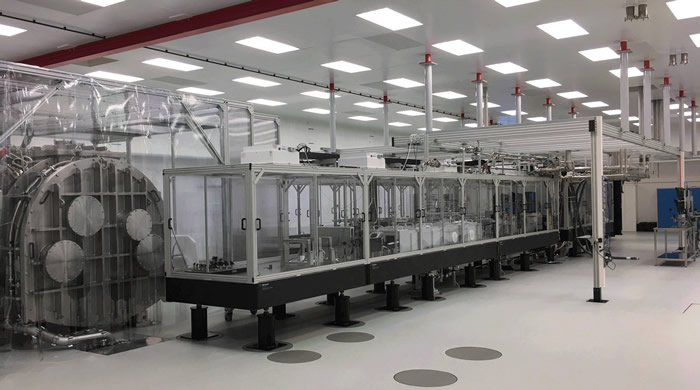 Since the end of September, an integrated team of scientific and technical staff from LLNL and ELI Beamlines has worked intensively on the installation of the laser hardware. All laser support systems, such as vacuum and cooling, were connected to the building, signaling readiness to turn the laser back on in its new home.

L3-HAPLS consists of a main petawatt beamline, energized by diode-pumped “pump” lasers. The system was constructed, assembled and ramped to an intermediary performance milestone that demonstrated its capability and marked the milestone for shipping and integrating with the facility. Staff from ELI were extensively trained on the laser’s assembly and operation while at Livermore to ensure success in transferring the HAPLS technology to the ELI user facility.

Early this year the L3-HAPLS system’s high energy pump laser will be gradually brought up to previous performance, followed by ramping the petawatt beamline first in energy and then in average power.

A New Generation of Lasers

“Over the course of more than four decades,” said LLNL Director Bill Goldstein, “LLNL has built an international reputation for developing some of the world’s more powerful and complex lasers. The successful delivery and installation of L3-HAPLS represents a new generation of high-energy, high-peak-power laser power systems. This collaboration, and others like it, provide LLNL with the opportunity to carry on its tradition of redefining the boundaries of science and technology.”

LLNL’s decades of cutting-edge laser research and development led to the key advancements that distinguish L3-HAPLS from other petawatt lasers: the ability to reach petawatt power levels while maintaining an unprecedented pulse rate; development of the world’s highest peak power diode arrays, driven by a Livermore-developed pulsed power system; a pump laser generating up to 200 joules at a 10 Hz repetition rate; a gas-cooled short-pulse titanium-doped sapphire amplifier; a sophisticated control system with a high level of automation including auto-alignment capability, fast laser startup, performance tracking and machine safety; a dual chirped-pulse-amplification high-contrast short-pulse front end; and a gigashot laser pump source for pumping the short-pulse preamplifiers.

Despite its complexity, L3-HAPLS was designed for a user facility. The focus is on the application or experiment, and the laser must run reliably, robustly and with minimal user intervention at record performance. This ability already has been demonstrated during the test runs at LLNL.

“L3-HAPLS is a quantum jump in technology,” said Constantin Haefner, LLNL’s program director for Advanced Photon Technologies in NIF&PS. “Not only did it allow LLNL to test and advance new laser concepts important for our mission as a national lab, it also is the first high peak power laser that can deliver petawatt pulses at average power—more than one megajoule per hour—entering the industrial application space.

When commissioning at ELI Beamlines is complete this year, L3-HAPLS will have a wide range of uses supporting both basic and applied research. By focusing petawatt peak power pulses at high intensity on a target, L3-HAPLS will generate secondary sources such as electromagnetic radiation or accelerate charged particles, enabling unparalleled access to a variety of research areas. They include time-resolved proton and x-ray radiography, laboratory astrophysics, and other basic science and medical applications for cancer treatments, in addition to industrial applications such as nondestructive evaluation of materials and laser fusion.