You may think the aisles in your neighborhood convenience store are crowded, but they’d look positively spacious compared to the passageways in the NIF Target Bay.

The Target Bay bristles with dozens of instruments needed for NIF experiments, ranging from inserters that hold NIF targets in place to cameras and other diagnostics that record the results of NIF shots. Fitting a new diagnostic into the available space is always tricky, but squeezing a three-meter-long x-ray microscope into the space between the end of the diagnostic insertion manipulator (DIM) and the inner wall of the Target Bay has created unique design, logistics, and engineering challenges.

The new Kirkpatrick-Baez Optic (KBO) diagnostic is needed to obtain high-resolution images of the “hot spots” at the center of target capsules during NIF inertial confinement fusion (ICF) implosions, explained LLNL physicist Louisa Pickworth, the project’s responsible scientist. (Albert Baez was the father of folk singer Joan Baez. He and Paul Kirkpatrick invented their reflection x-ray microscope at Stanford University in the 1940s.) 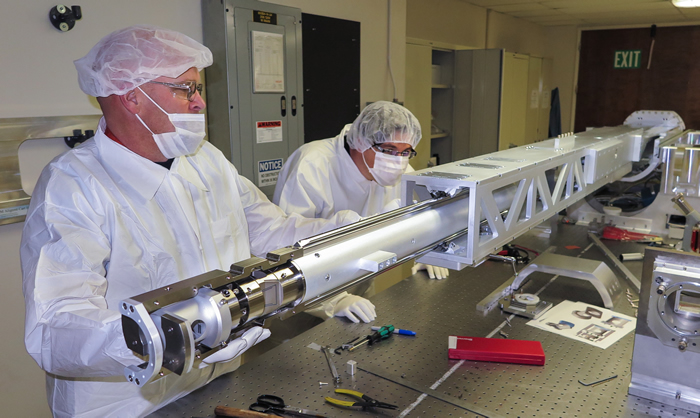 “In the ICF experiments that we’re doing, the hot spot is normally about 60 microns (millionths of a meter) across, and our current detectors have resolutions of about 10 microns or so at best,” Pickworth said. “We really need better than that to see what’s going on inside the hot spot. This microscope is going to provide much better resolution by using x-ray optics, a totally different method of imaging the implosion. And we’re going to high magnifications, which is why it had to be so long.”

“We have to get the KBO into the facility and physically fit it behind the back of the DIM and the (Target Bay) wall,” said System Manager Jay Ayers. “To get the magnification we need (more than 10.5x) we needed an additional one meter of space, which grossly exceeded the allowable footprint. So we had to design a one-meter telescoping section—there was no other choice.”

The specially designed diagnostic will provide improved spatial resolution, higher imaging throughput (signal strength), and the ability for wavelength selection that is currently unavailable using standard pinhole framing camera technology, Ayers said. To achieve those goals, four pairs of mirrors that make up four x-ray imaging channels must be very precisely aligned. In addition, the overlapping image axis of the four pairs must be aligned to within a 50-micron radius of the center of the NIF target, and the positioning must be highly repeatable between experiments. 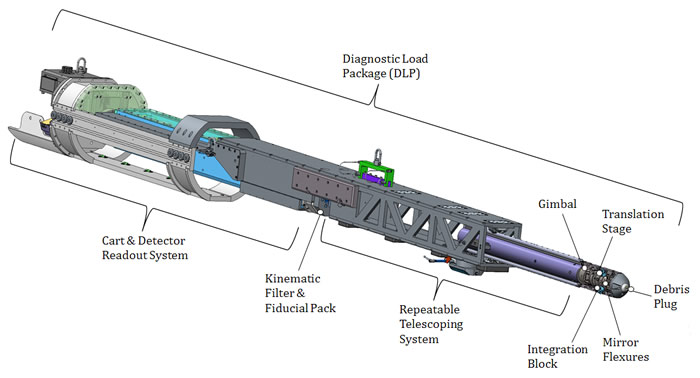 The KBO x-ray microscope diagnostic load package for use in a NIF diagnostic insertion manipulator.

Development of the KBO diagnostic was a collaboration between NIF & Photon Science and LLNL’s Physical and Life Sciences (PLS) Directorate. “A lot of unique engineering efforts were put into this,” Ayers said. “The positional tolerance of the x-ray optics is very high, so we relied on two precision engineers at PLS, Todd Decker and Randy Hill, to do the design for what we call the quads. There are four channels, each comprised of x-ray optics that are pitched to one another and that also have to be very accurately pointed towards the target.

“That was probably one of the most challenging aspects,” he said. “Randy Hill deserves special credit for his creative design solutions for the precision flexures, gimbal and translation stage needed to position the optics.”

Kirkpatrick-Baez optics—two curved “grazing incidence” mirrors positioned at right angles to form a two-dimensional x-ray image—is a widely used technology. “They work very nicely,” said Tommaso Pardini of the PLS X-ray Optics Group. “The interesting thing about this project is that we incorporated this vintage technology into a very difficult environment, which is NIF.

“You can’t get in there and tweak the position of these optics after you put them in the Target Chamber,” Pardini said. “Everything has to be perfectly aligned within very tight tolerances when you put it in—you don’t have any access to it after that. That was the thing that ended up driving all the fancy engineering that Jay and Todd and Randy had to do to make sure that it actually works.”

When extended, the telescoping snout locates the KBO’s mirrors at the end of a Diagnostic Load Package (DLP), cantilevered more than three meters out from its bolted connection points. “We can extend (the snout) off-line, do our metrology and make sure that everything’s on axis, and then we can collapse it and transport it, install it and then re-extend it in the DIM,” Ayers said. 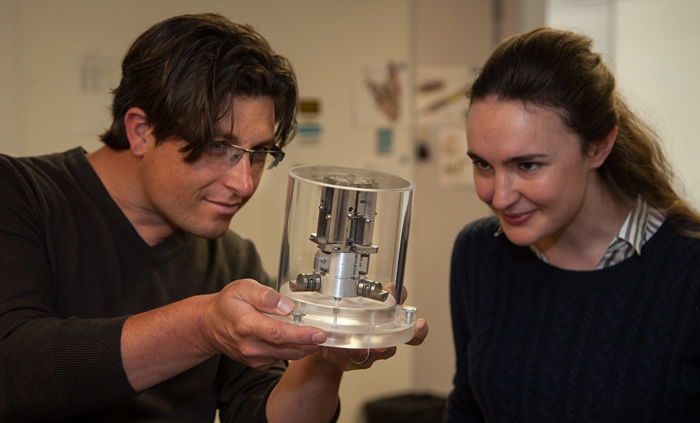 Another challenge was protecting the sensitive optics in the KBO diagnostic, which will be only five inches away from the extremely high-impulse target implosion shock wave during an ICF implosion. The team developed special exterior shielding and a replaceable debris window that can be easily exchanged between shots. Like the KBO itself, the design of the debris window was bounded by multiple constraints: the necessary clearance from laser beampaths, the high velocity of the debris “wind,” and the limited access for exchange once it is loaded in the DIM.

To provide wavelength filtering to accommodate different experimental needs, the team developed special multilayer coatings for the KBO system’s mirrors. “One thing that Livermore does very well is coating x-ray optics with these multilayers,” Pardini said. “Chris Walton, Paul Mirkarimi, Jennifer Alameda, and Regina Soufli spent quite a bit of time developing coating that would fit the requirements.” Experimental flexibility will be provided by swapping mirror packs with different energy responses.

Extensive simulations and off-line testing of the system’s optics and other components have produced good results, showing substantial improvements in throughput and resolution over pinhole imaging systems. The first phase of the project, labeled KBO 1, is due to be deployed in mid-June. KBO 2, which will feature a broadband mirror pack, is scheduled for fall of this year; and KBO 3, designed for hardened x-ray cameras for use in high-neutron-yield experiments, is due to be deployed in Fiscal Year 2016.

“We’re integrating a lot of new and different ways of doing things into this diagnostic,” Pickworth said. “What we’re going to produce at the end of the day is going to be much better than the imaging systems that we currently have, with detector-limited resolution and a lot more throughput than other imaging systems.”

One of the more demanding aspects in the development of NIF’s Advanced Radiographic Capability (ARC) has been fielding the specialized controls and other system updates needed to operate what soon will be the world’s highest-energy short-pulse laser.

A team of software engineers led by Gordon Brunton of NIF Computing Applications worked for 18 months to develop and deploy the system and software controls enhancements necessary for ARC operations. Integration had to be planned carefully to minimize disruption to ongoing NIF shot operations. “One of the reasons ARC was so challenging,” Brunton said, “was that all of the pieces of every control system software release were interrelated. Failure to complete one piece on time could have jeopardized the whole schedule. But due to the work of the whole team, we were able to meet every milestone.” 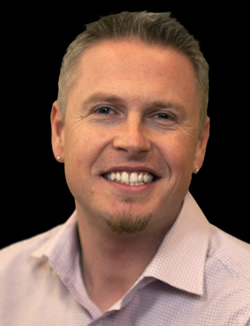 ARC is a member of a new generation of ultrafast, ultrahigh-resolution diagnostic devices being deployed on NIF to provide precise information about the physical processes occurring in the target during the extremely short (billionths of a second) duration of a NIF laser pulse. When complete, ARC will be used to produce short bursts of intense x-rays to image NIF targets as well as to enable new experiments in fusion ignition and high energy density stewardship science.

ARC is being integrated on an existing set of four NIF beam lines—known as a quad—to facilitate reuse of the existing NIF main amplification system. The modified NIF quad has been designed to rapidly and autonomously switch between ARC (short-pulse) and NIF (long-pulse) operations based on experimental requirements. In ARC mode, it will use a split-beam configuration, propagating two short-pulse beams for each NIF aperture. Staggering the arrival of the eight ARC beamlets onto special backlighter targets will enable creation of an x-ray “movie” with tens of trillionths of a second resolution.

ARC increases the amount of complex laser equipment that must be monitored and coordinated for a successful NIF experiment. In fact, the number of control points for electronic, optical, and mechanical devices on the modified NIF quad grew by 70 percent. “It felt like building another new beamline from scratch,” Brunton said.

Throughout the system design phase and in close coordination with the system experts, the team sought opportunities for leveraging existing types of control hardware. This reuse strategy significantly reduced the deployment schedule, cost, and risk.

“Writing software for a new control type takes months, whereas implementing control points for an existing type only takes days,” Brunton noted. “Overall, the reuse saved us many years of effort.”

Operationally qualifying the ARC system requires verification of many aspects of the short pulse. To allow these verifications to be performed and continuously monitored on each ARC shot, a comprehensive suite of short-pulse diagnostics has been integrated into the system, several of which were developed specifically for ARC. Due to the specialized equipment, the new and modified software deployed—representing about 15 percent of the new control points—primarily related to diagnostics. 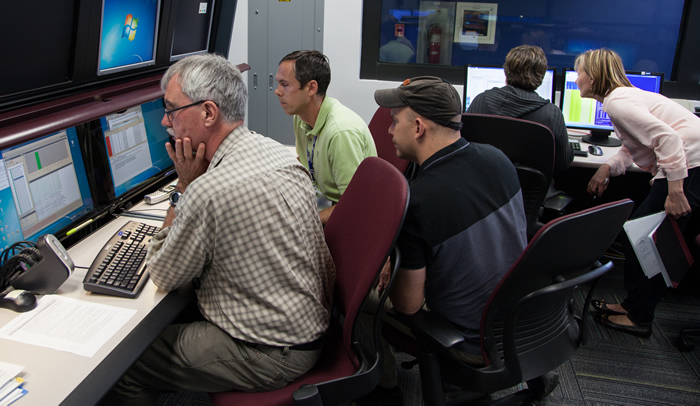 All NIF experiments are performed with the support of the experiment automation system. This suite of software applications manages the full lifecycle of a laser shot, from shot goal acquisition to shot data archiving. The software is based on a data-driven workflow engine within a state machine model. The model breaks a shot cycle into numerous operational phases, and each phase is populated with workflow nodes that perform well-defined, reusable, automated activities (for instance, pulse shaping). Shot goals are used to autonomously reconfigure the system based on experimental needs. It is this data-driven flexibility that has facilitated the integration of ARC into the workflow automation with minimal software framework modifications.

Due to the scale of the ARC system modification, Brunton’s team knew that comprehensive off-line qualification would be critical for minimizing risk to NIF operations. For testing, every control point in NIF was given an emulated equivalent that closely mirrored the behavior of the real hardware device. During off-line integration and formal quality assurance, the team used these capabilities extensively to complete qualification of most software modifications over multiple phases. This strategy greatly reduced the on-line NIF facility time required for qualification of the modifications. The final major release phase concluded with shot automation capability deployment in the summer of 2014.

An extensive series of commissioning shots is scheduled on ARC over the next several months, and the system is expected to begin experimental operations later in the year. Brunton’s team, which will continue to support ARC controls through commissioning and operations, is pleased to see the ARC effort at last approaching completion.

“Even though significant progress has been made on the fusion ignition challenge,” Brunton said, “ARC remains an important diagnostic capability. It will help us understand more about inertial confinement fusion experiments by providing improved data on important parameters such as compression, symmetry, and fuel mix. In addition, it opens up opportunities for further experimentation, allowing us to look deeper into dense, novel materials that current diagnostic methods can’t see into.”