Scientists from Lawrence Livermore National Laboratory (LLNL) used giant lasers to flash-freeze water into its exotic superionic phase and record x-ray diffraction patterns to identify its atomic structure for the first time – all in just a few billionths of a second. The findings were reported May 8 in Nature.

Scientists first predicted in 1988 that water would transition to an exotic state of matter characterized by the coexistence of a solid lattice of oxygen and liquid-like hydrogen – a phase called superionic ice – when subjected to the extreme pressures and temperatures that exist in the interiors of water-rich giant planets like Uranus and Neptune. These predictions remained in place until 2018, when a team led by scientists from LLNL presented the first experimental evidence for this strange state of water. 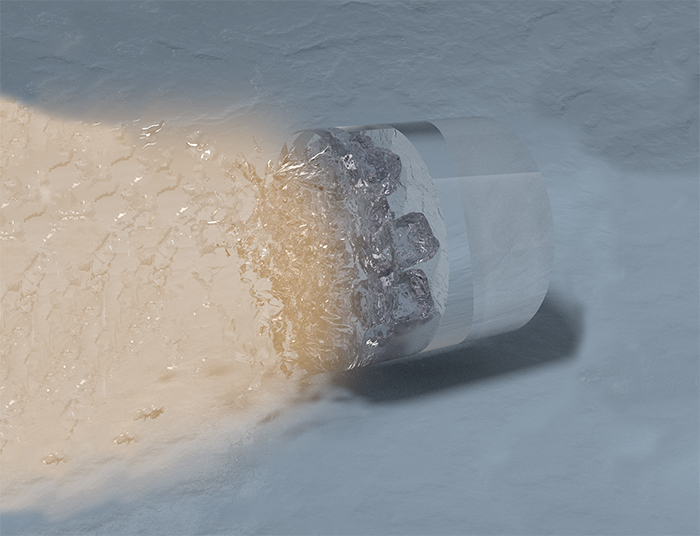 In this artistic rendering of the laser compression experiment, high power lasers focused on the surface of a diamond generate a sequence of shock waves that propagate throughout the sample assembly (from left to right), simultaneously compressing and heating the initially liquid water sample and forcing it to freeze into the superionic water ice phase. Credit: Marius Millot/Federica Coppari/Sebastien Hamel/Liam Krauss

Now the LLNL scientists describe new results. Using laser-driven shockwaves and in-situ x-ray diffraction, they observed the nucleation of a crystalline lattice of oxygens in a few billionths of a second, revealing for the first time the microscopic structure of superionic ice.

“We wanted to determine the atomic structure of superionic water,” said LLNL physicist Federica Coppari, co-lead author of the paper. “But given the extreme conditions at which this elusive state of matter is predicted to be stable, compressing water to such pressures and temperatures and simultaneously taking snapshots of the atomic structure was an extremely difficult task, which required an innovative experimental design.”

The researchers performed a series of experiments at the Omega Laser Facility at the University of Rochester’s Laboratory for Laser Energetics (LLE). They used six giant laser beams to generate a sequence of shockwaves of progressively increasing intensity to compress a thin layer of initially liquid water to extreme pressures (100-400 gigapascals [GPa], or 1-4 million times Earth’s atmospheric pressure) and temperatures (3,000-5,000 degrees Fahrenheit).

“We designed the experiments to compress the water so that it would freeze into solid ice, but it was not certain that the ice crystals would actually form and grow in the few billionths of a second that we can hold the pressure-temperature conditions,” said LLNL physicist and co-lead author Marius Millot.

Video: “How Do We Make New States of Matter in the Lab? | Superionic Ice.”

To document the crystallization and identify the atomic structure, the team blasted a tiny iron foil with 16 additional laser pulses to create a hot plasma, which generated a flash of x rays precisely timed to illuminate the compressed water sample once brought into the predicted stability domain of superionic ice.

“The x-ray diffraction patterns we measured are an unambiguous signature for dense ice crystals forming during the ultrafast shockwave compression demonstrating that nucleation of solid ice from liquid water is fast enough to be observed in the nanosecond timescale of the experiment,” Coppari said. 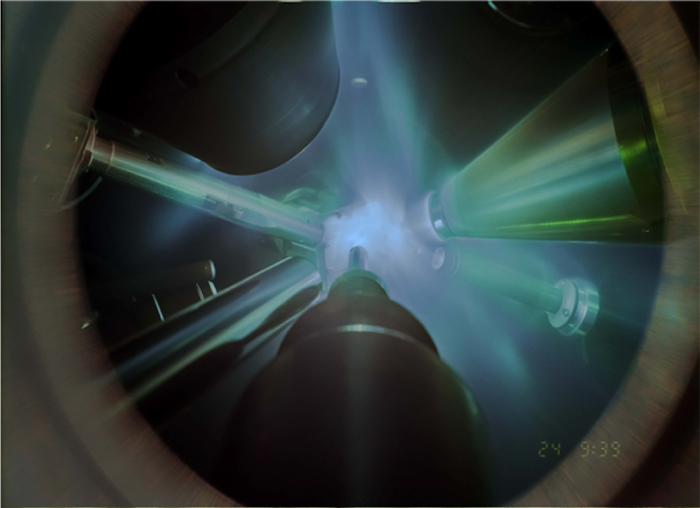 In this time-integrated photograph of an x-ray diffraction experiment, giant lasers are focused on the water sample, sitting on the front plate of the diagnostic used to record diffraction patterns, to compress it into the superionic phase. Additional laser beams generate an x-ray flash off an iron foil that allows the researchers to take a snapshot of the compress/hot water layer. Diagnostics monitor the time history of the laser pulses and the brightness of the emitted x-ray source. Credit: Marius Millot/Federica Coppari(LLNL)/Eugene Kowaluk (LLE).

The team’s data has profound implications for the interior structure of ice giant planets. Since superionic ice is ultimately a solid, the idea of these planets having a uniform rapidly convecting fluid layer no longer holds.

“Because water ice at Uranus’ and Neptune’s interior conditions has a crystalline lattice, we argue that superionic ice should not flow like a liquid such as the fluid iron outer core of the Earth,” Millot said. “Rather, it's probably better to picture that superionic ice would flow similarly to the Earth’s mantle, which is made of solid rock, yet flows and supports large-scale convective motions on the very long geological timescales.  This can dramatically affect our understanding of the internal structure and the evolution of the icy giant planets, as well as all their numerous extrasolar cousins.”

Co-authors include Antonio Correa Barrios, Sebastien Hamel, Damian Swift and Jon Eggert from LLNL and Ryan Rygg, previously at LLNL and now at the University of Rochester. The work was partially funded by the Laboratory Directed Research and Development (LDRD) program.