In August a multi-institutional team of scientists fired the 26th and final shot of the Pleiades experimental campaign at NIF. The campaign has created a new scientific foundation for the study of supersonic radiation flow in astrophysical phenomena and in inertial confinement fusion physics.

Begun in 2011, the campaign was fielded by Los Alamos National Laboratory (LANL) in collaboration with the United Kingdom’s Atomic Weapons Establishment (AWE) and supported by LLNL.

Pleiades was devised to study how radiation energy propagates through material in the radiation-dominated and diffusive regime. This is a general scientific “problem” created in a range of plasmas, both astrophysical and in the laboratory. It also is a problem widely used to test and benchmark radiation hydrodynamics codes. 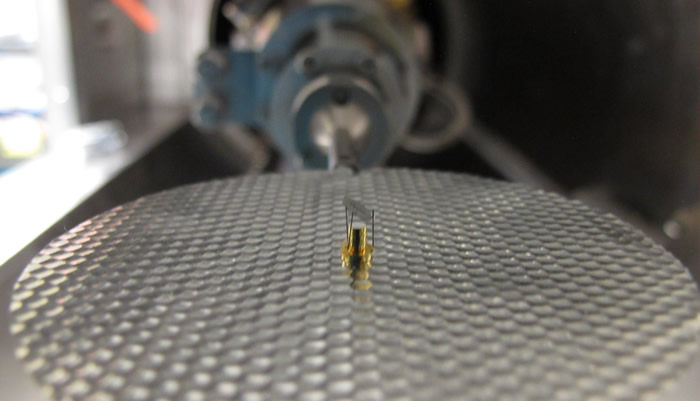 Close-up view of a Pleiades target installed on a NIF target positioner. The large sombrero-like shield is intended to block unconverted light from creating background radiation for the diagnostics measuring energy transfer from the half hohlraum in the center as it is heated by the infrared laser beams delivered to the foam package.

“The study of how radiation propagates through a plasma is of central importance to many areas of physics,” said James Benstead, AWE campaign lead. “Important examples include the heating of ablators in indirect-drive inertial confinement fusion experiments, heating through hohlraum walls and, in astrophysics, supernova explosions and the transport of radiation through star-forming regions. The Pleiades campaign allowed the simulation of radiation transport through plasmas to be tested experimentally in a constraining, supersonic and diffusive regime.”

The team created a laboratory version of the general one-dimensional (1D) problem using a half-hohlraum x-ray source, which launched a supersonic and diffusive heat front into a cylinder of foam material. This allowed the researchers to study the basic radiation flow phenomena as well as constrain the material properties of the materials used in a previously inaccessible regime.

“Comparison of the data with simulations shows that our simulation capability is very good,” said Alastair Moore, LLNL campaign lead. “When we correct the material properties data within its inherent uncertainty, we get an excellent match to the radiation transport results.”

The high-temperature hohlraum that was developed for the Pleiades campaign will be a good platform to study radiation flow through other low-density foam media to constrain material properties, Moore added. In addition, the Pleiades x-ray drive setup already is being applied as part of the Menkar and Cepheus campaigns fielded at NIF by AWE and LANL, respectively. The Pleiades platform also was used for a recent performance qualification shot of a new diagnostic.

“The Pleiades campaign was an excellent example of not just a successful collaboration between AWE and LANL, but also of NIF being used as a user facility by these labs,” Benstead said.