For the first time at the National Ignition Facility, positrons—the antimatter “twins” of electrons—have been created and detected by LLNL researchers. Performed in May, the Discovery Science experiments showed that positron-electron pairs traveling at near light speed can be produced on NIF’s Advanced Radiographic Capability (ARC) laser using a new specially-designed plasma lens to increase the laser’s intensity.

The positrons emanated in jets from two sides of a gold target shaped like a triangular prism and mixed together with relativistic electrons to form a matter-antimatter plasma of electron-positron pairs. The studies could shed light on many high-energy processes occurring throughout the universe. 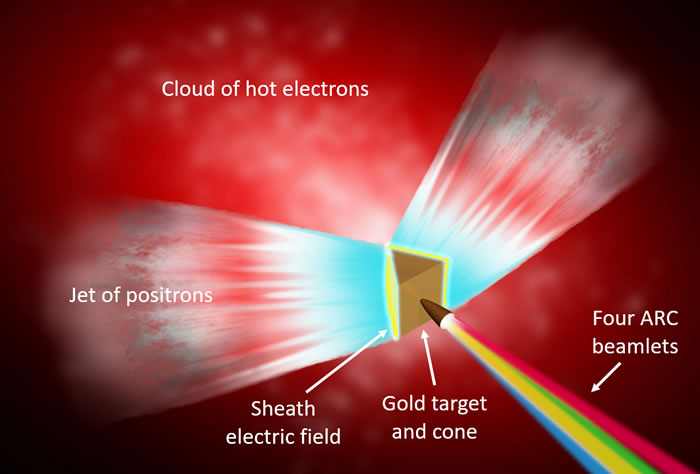 The diagram shows ARC’s four laser beamlets striking the gold target’s cone, which reflects the light to the cone tip, increasing the laser intensity to reach the level needed to generate relativistic (near light speed) electrons that interact with the gold atoms to produce gamma rays. The gamma rays convert into electrons and positrons. The positrons exit the target in jets that interact with the hot electron cloud and then form the matter-antimatter plasma. Credit: Mark Meamber

In a Laboratory Directed Research and Development (LDRD) project lead by plasma physicist Hui Chen, the Pair Plasma team researched electron-positron pairs with other high-power, short-pulse lasers, such as the Titan laser at Livermore and the OMEGA EP laser at the Laboratory for Laser Energetics at the University of Rochester, well before ARC was commissioned.

“Matter-antimatter pairs are abundant in space—like in gamma-ray bursts near black holes and in neutron star collisions—and are almost a fundamental component of matter in the universe,” says Chen. “These new experiments are first steps. Our goal is to study the astrophysics of the most energetic processes in the universe here on Earth. Using ARC is how we hope to make it happen.”

As governed by Albert Einstein’s famous equation E=mc2 describing the equivalence of matter and energy, changing light to matter and antimatter is part of a series of physical processes allowing ARC to create the kind of electron-positron plasma that results when a massive star collapses.

Ordinarily, when matter and antimatter interact, they instantaneously annihilate each other. When ARC fires with sufficient on-target laser intensity (power per unit area), however, it first generates relativistic electrons at a few million electronvolt (MeV) energies inside the gold target. The electrons move out of the target at very close to light speed and leave behind a sheath electric field—a strong electric field near the surface where they exited. But before this happens, collisions between some of these electrons and the gold atoms produce gamma rays. A single gamma ray can then rapidly transform from a high-energy, massless photon of light into a positron and an electron, both with mass.

The electric field that had been created by the relativistic electrons (negatively charged) attracts and accelerates the positrons (positively charged) to relativistic speeds and out of the target in high-flux and high-energy jets that mix with a cloud of relativistic electrons (hot electrons) gathered outside the target. Because the electrons and positrons are moving very close to the speed of light, there is little chance of them colliding with each other. Until they slow down and annihilate, there is a brief moment in time when they coexist as pairs.

The researchers initially were uncertain whether ARC—the world’s most energetic short-pulse laser—could produce the enormous laser intensity required by the physics for the laser-solid interaction to generate the positrons. About 30 percent of the laser energy transfers into the energy of relativistic electrons, 0.3 percent to gamma rays, and 0.03 percent to electron-positron pairs.

That’s why it was critical for the researchers to maximize the laser intensity in order to create as many relativistic electrons as possible, since only a very small fraction will interact with positrons. 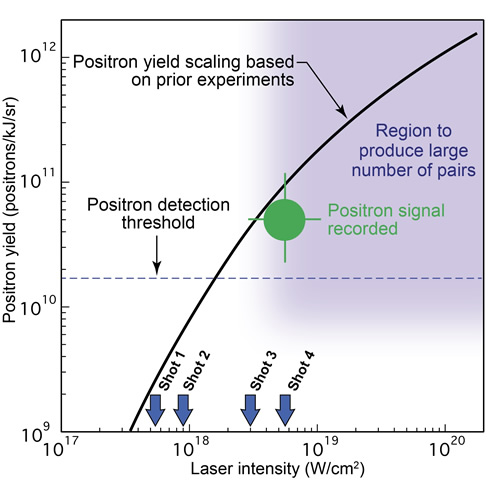 Two earlier experiments in 2017, first at a laser energy of 100 joules (J) per beamlet and then at 600 J/beamlet, showed that hitting the gold target with four ARC beamlets at the same time but at different locations did not produce positrons at levels detectable by NIF’s diagnostics.

In each of the previous cases, the laser intensity was less than 1018 watts per square centimeter (W/cm2), the maximum allowable for the pulse duration used. ARC can’t run with much more than this level of energy without damaging its optics. Accurately aiming all the beamlets so that they overlapped and had a small enough combined spot size was also not possible because the beamlets are focused by parabolic mirrors outside the Target Chamber, a distance of about seven meters from Target Chamber Center.

To overcome these obstacles, the researchers tested a new design in which a parabolic gold cone with an opening of about 0.5 millimeters in diameter was attached to the target and used like a funnel to catch all the beamlets and condense them down to a spot size of about 0.05 millimeters. They hoped that the laser light entering the cone would form a thin reflecting layer that would act as a plasma lens, focusing the laser light into a concentrated spot on the target.

Postdoctoral plasma physicist Jackson Williams, the responsible individual (RI) for the recent shots, explains: “Like all of the Discovery Science shots, the Pair Plasma experiments took an extraordinary amount of effort to complete due to the new capabilities our shots used. They were also contingent upon a shot during the previous week that tested ARC’s beam-to-beam synchronization, which successfully paved the way for all four beamlets to be fired into the cone at the same time. It took coordination between all the NIF expert groups to ensure the Pair Plasma shots were successful.” 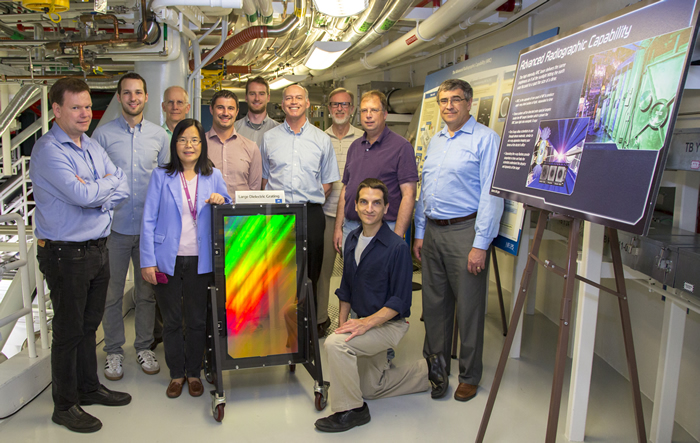 The first trial with the cone, using only one ARC beamlet at 550 joules and a pulse duration of 10 picoseconds (trillionths of a second), did produce detectable positrons but still below a level where large numbers of electron-positron pairs would be expected to form. With the same laser energy and duration as the first trial, all four beamlets were then fired at the same time into the cone. At greater than 4×1018 W/cm2, the laser intensity was sufficient to generate enough positrons to reach the threshold where electron-positron pair production starts to occur in large numbers.

Preliminary data indicate that positrons with an energy of about 10 MeV were detected in the greatest numbers, while the maximum energy they reached was about 25 MeV.

This raw image of an energy spectrum from the NIF Electron-Positron-Proton Spectrometer shows an orange band corresponding to a signal from positrons that have a peak number at around 10 MeV and maximum energy of about 25 MeV. Credit: LLNL

Chen found the results highly encouraging, especially since there is a significant margin of laser energy left to be explored. “When testing a new target platform, like with our new cone design,” she says, “it is often done at relatively lower laser energies to be on the safe side. So, each ARC beamlet can still be dialed up to almost double the laser energy. With four beamlets of about twice as much laser energy, the laser intensity will greatly increase, which should end up yielding many more positrons and, thus, many more electron-positron pairs.”

“The observations of strong positron signals and extremely high energy electron acceleration exceeded our expectations,” adds Williams. “We’re now looking forward to our next experiments in November, where we’ll optimize the conversion efficiency of laser light into relativistic electrons by making further improvements to the target.”

The successful performance of the target’s gold cone plasma lens also opens opportunities beyond Discovery Science. While created for the Plasma Pair experiments, the new design could be used for other applications of ARC where higher laser intensities or beamlet collimation would prove beneficial.

Others from the Livermore team included Andrew MacPhee, David Martinez, Dan Kalantar, and Kelly Youngblood. Researchers from SLAC National Accelerator Laboratory, General Atomics, the University of California at San Diego, the University of Michigan, and Osaka University in Japan also contributed to the studies.