LLNL researchers have achieved an important demonstration of a new NIF imaging capability that could help them understand complex phenomena important to science-based Stockpile Stewardship.

The demonstration took place during a Dec. 7 experiment conducted jointly by researchers in the Laboratory’s Weapons and Complex Integration (WCI) and NIF and Photon Science directorates. The shot resulted in an x-ray image, or radiograph, that showed how shock waves and material features evolve under extreme conditions with never-before-seen clarity. 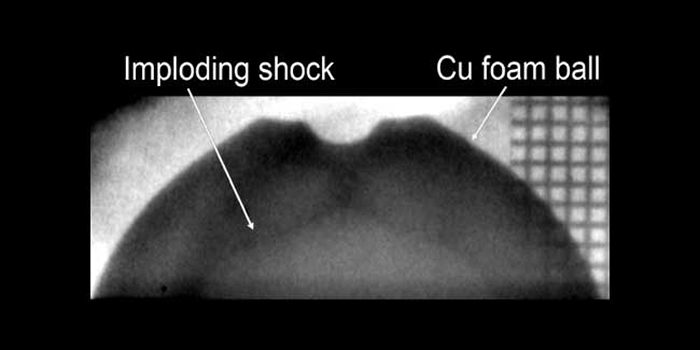 This radiograph shows shock and feature evolution inside a 1.75-millimeter-diameter copper(Cu)-foam ball. It is the first successful demonstration of a new imaging capability that can illuminate how materials evolve under extreme conditions.

For example, interactions among the target features, the laser light and the diagnostic sensors created blurring and double-images on early tests; the team needed to understand and address those challenges with changes to the experimental configuration. Now that the capability has been successfully demonstrated, the team is moving forward with the first programmatic data shot, scheduled for March.

“When I first saw that radiograph my first thought was relief, and my second thought was elation,” said Alan Wan, associate program director for high energy density (HED) execution. “We had a number of different challenges with past experiments that the team had to solve. When we saw every feature that we aimed to measure with this experiment, I knew we were ready. Lets go!”

HED experiments are essential to the nation’s stockpile assessment and certification strategy, but compressing an experimental target to extreme pressures and temperatures is not enough if researchers can’t get a view inside the target to diagnose how it evolves during implosion. While other research facilities have high-energy backlighters like ARC, none are able to produce the HED conditions that NIF can. Paired together, ARC and NIF hold promise to provide researchers with data that could validate how complex systems in the stockpile behave.

ARC is a high-energy, high-intensity, short-pulse laser that splits two of NIF’s beamlines into four individual beamlets. ARC works by focusing short-pulse beams onto a small-diameter silver wire, producing a spectrum of x-rays that are used to radiograph the target.

“Getting to this point has been a little bit like ‘The Little Engine That Could,’” said Wan. “‘I think I can. I think I can…I thought I could!’ We really worked together as a team, and we’ve overcome a lot of challenges. It’s a complicated system to design and execute. Now we’re looking forward to the ‘data shots’ starting in March.”