Beams of high-energy protons can be precisely targeted and are able to quickly heat materials before they can expand. Ultrafast heating of matter will enable opacity and equation-of-state measurements at unprecedented energy densities and could open the door to new ways of studying extreme states of matter, such as stellar and planetary interiors. Proton acceleration also promises to enable a variety of other applications in high energy density (HED) and inertial confinement fusion (ICF) research.

In a Physics of Plasmas paper published online on April 24, an international team of researchers reported that the maximum proton energies created in the February 2018 experiments—from 14 to 18 MeV (million electron volts)—are “indicative of (an)…electron acceleration mechanism that sustains acceleration over long (multi-picosecond) time-scales and allows for proton energies to be achieved far beyond what the well-established scalings of proton acceleration (at ARC-level intensities) would predict. 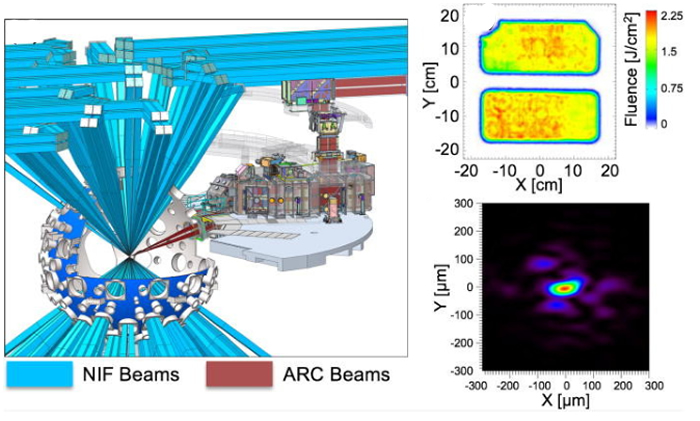 (Left) Schematic of the NIF Target Chamber with 192 NIF long-pulse beams shown in blue and two of the NIF beams “picked off” for ARC shown in red. (Upper right) The two long-pulse beams are split to form two rectangular beamlets each, giving a total of four beamlets which are compressed to picosecond pulse-lengths. (Lower right) The modeled ellipsoidal focal spot for one of the four beamlets at Target Chamber center.

“Coupled with the NIF,” the researchers said, “developing ARC laser-driven ion acceleration capabilities will enable multiple exciting applications. For example, the NIF can deliver 1.8 MJ (million joules) of laser light to drive an experiment and with an energetic proton beam, we could begin to diagnose electromagnetic fields in these experiments by using proton radiography.”

LLNL engineering physicist Derek Mariscal, lead author of the paper, said the surprise results at ARC’s quasi-relativistic, or “modest” laser intensities—about a quintillion (1018) watts per square centimeter—“forced us to try to understand the source of these particles, and we ultimately found that a different mechanism for accelerating particles to MeV electrons was necessary to explain the results.

“While we haven’t completely explained this mechanism,” he said, “we’ve been able to start discounting mechanisms that have been identified in previous short-pulse work to start honing in on how we could get such unexpected electron and subsequent proton energies.

“These results are really encouraging not only for ARC-driven proton beams,” he added, “but for particle acceleration in what’s referred to as the quasi-relativistic laser regime.”

ARC is a petawatt (quadrillion watt)-class short-pulse laser created by splitting two of NIF’s 192 long-pulse beams into four rectangular beamlets. Using a 2018 Nobel Prize-winning process called chirped-pulse amplification, the beamlets are stretched in time to reduce their peak intensity, then amplified at intensities below the optics damage threshold in the laser amplifiers, and finally compressed to picosecond (trillionth of a second) pulse lengths and highest peak power in large compressor vessels, as shown in this video:

In the experiments, which are supported by LLNL’s Laboratory Directed Research and Development (LDRD) and NIF’s Discovery Science programs, two ARC shots were fired onto 1.5×1.5-millimeter-square, 33-micron-thick titanium foils. About 2.6 kilojoules of energy was delivered in a 9.6-picosecond pulse and 1.1 kJ was fired in a 1.6-ps pulse. A Target Normal Sheath Acceleration (TNSA) field, first observed on LLNL’s Nova petawatt laser two decades ago, accelerated high-energy protons and ions from the contamination layer of proton-rich hydrocarbons and water coating the target’s surface. 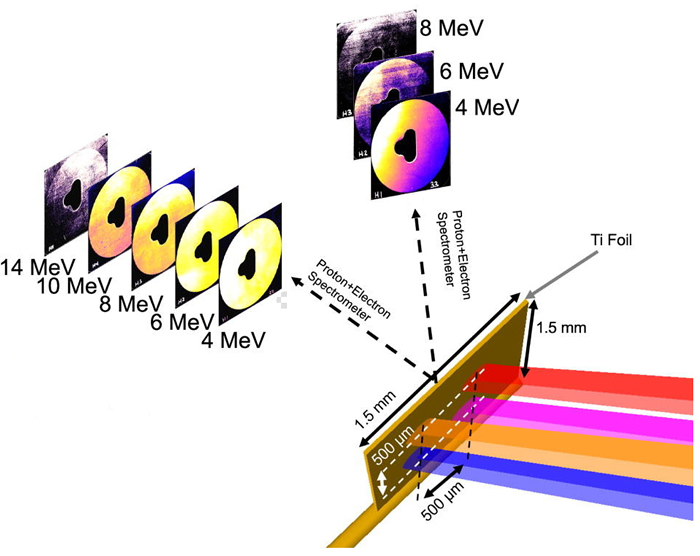 “We plan to take this platform in several directions,” Mariscal said. “One of the most obvious directions is for probing electromagnetic field structures generated during experiments driven by the NIF long-pulse beams, which has been a standard use for these proton beams since their discovery here at LLNL around 20 years ago on the Nova Petawatt laser.

“In addition to using proton beams as a diagnostic tool,” he said, “we plan to continue to use these beams to create high-energy-density conditions. Since we’re able to generate around 50 joules of proton beam energy, if we can deposit it over a 10-picosecond time-scale we can generate plasmas at near solid density with temperatures over 100 eV, which is a truly exotic state of matter known as Hot Dense Matter.”

“Pulse shaping with nanosecond pulses allows for driving precision shocks in materials for studying material equations of state, but we plan to use this idea at the sub-picosecond level to manipulate particle acceleration physics,” Mariscal said. “We’ve tried this scheme on the OMEGA EP laser at the University of Rochester’s Laboratory for Laser Energetics and saw greatly enhanced laser coupling to high-energy particles over single short pulses.”

Additional NIF shots will use a 10-picosecond ARC beam to drive a beam of protons intended to rapidly heat a solid sample to more than 50 eV. Concurrently, a higher-intensity one-picosecond ARC beam will be used to generate a second proton beam that will probe the electromagnetic field structures of the heating experiment. “That will ultimately help us to understand how particles are being accelerated to MeV energies with a 10-picosecond pulse,” Mariscal said.

Mariscal credited the “fantastic” suite of diagnostics at the ARC Diagnostics Table and modeling support from the NIF ARC Laser Team with enabling the researchers to learn “some very interesting fundamental short-pulse-driven particle acceleration physics in this new regime provided by ARC.

“We’re given a new level of confidence in our interpretations due to the high-quality characterization of delivered ARC laser pulses,” he said. “This allows our physics team to accurately model the laser conditions of the experiment and maximize our understanding from the limited overall number of ARC laser experiments.”