LLNL and Los Alamos National Laboratory (LANL) researchers have developed an innovative technique for diagnosing the properties of the plasma created during inertial confinement fusion (ICF) implosions on NIF. The results could inform NIF’s pursuit of ignition and provide new clues about the makeup of the enigmatic brown dwarfs known as “failed stars.” 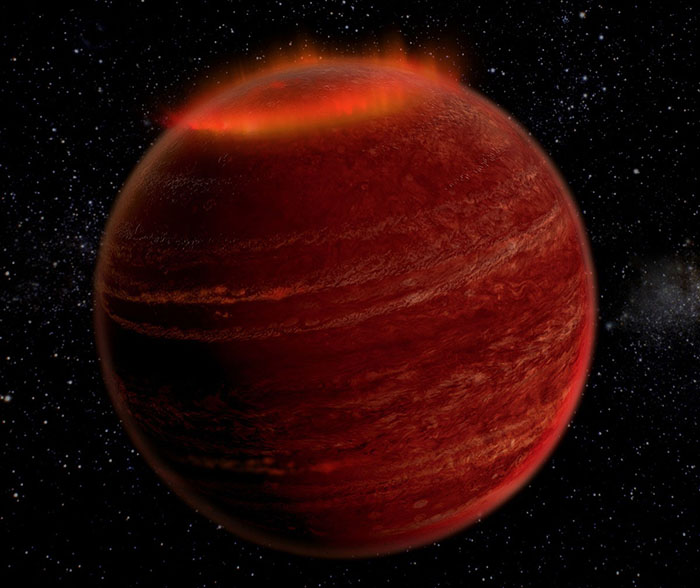 Artist’s concept of brilliant auroras on the brown dwarf LSR J1835+3259, a failed star about 18.5 light-years from Earth. Brown dwarfs are bigger than giant planets like Jupiter but lack enough mass to achieve the core densities and pressures needed to ignite or sustain fusion reactions. Credit: Chuck Carter and Gregg Hallinan/Caltech (Click to expand.)

A team led by LANL physicist Anna Hayes conducted a series of experiments on NIF over several years aimed at determining the stopping power, or rate of energy loss, of particles passing through ICF plasma. They did this by measuring rare reaction-in-ﬂight (RIF) neutrons produced by the implosion. The production of RIF neutrons is controlled by the stopping power in the plasma, a mixture of ions—atoms which have lost some or all of their electrons—and free electrons.

The experiments took advantage of NIF’s ability to create an unusual “partially degenerate” form of plasma. Degeneracy is the tendency of highly compressed subatomic particles such as electrons and neutrons to resist further compression. The interiors of super-dense white dwarfs and neutron stars, for example, are highly degenerate. Partial degeneracy characterizes the interiors of the lowest-mass stars, brown dwarfs, and giant planets. 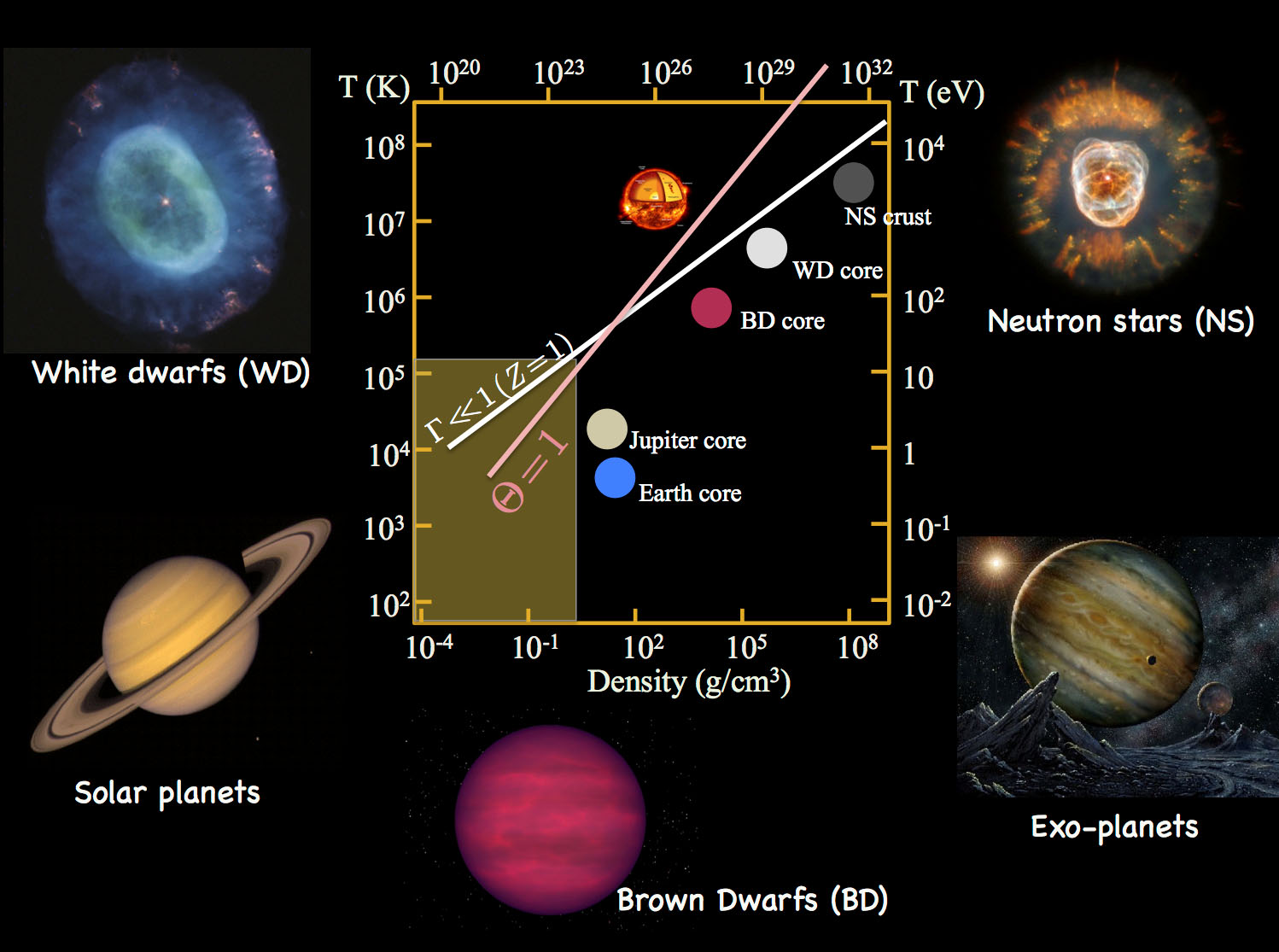 The relative temperatures (T) and densities of various astrophysical objects. Brown dwarfs are larger and hotter than giant planets but smaller and cooler than white dwarfs. (Click to expand.)

“The National Ignition Facility has the unique capability of varying electron quantum degeneracy by adjusting the laser drive used to implode (target) capsules,” the researchers reported in a recent Nature Physics paper. “This allows experimental studies of the effects of the degeneracy level on plasma transport properties.”

The paper was accompanied by a commentary in the same issue of the journal.

In ICF experiments on NIF, the world’s largest and highest-energy laser system, up to 192 laser beams are fired into a centimeter-sized cylinder called a hohlraum. This generates a “bath” of soft x rays that ablate the surface of a peppercorn-sized capsule suspended in the hohlraum, causing a rocket-like implosion that compresses and heats partially frozen deuterium and tritium fuel inside the capsule to conditions of pressure and temperature found in the cores of stars and giant planets. The degree of fuel compression can be controlled by the pulse shape—the timing of the shocks delivered by the laser pulse.

The resulting fusion reactions in the hot spot at the center of the implosion release energy in the form of alpha particles (helium nuclei) and 14 MeV (million electron volt) neutrons. If enough alpha particles are stopped in the high-density fuel layer around the hot spot, a process known as alpha heating, the dense fuel temperature will become high enough to launch a self-sustaining thermonuclear reaction. 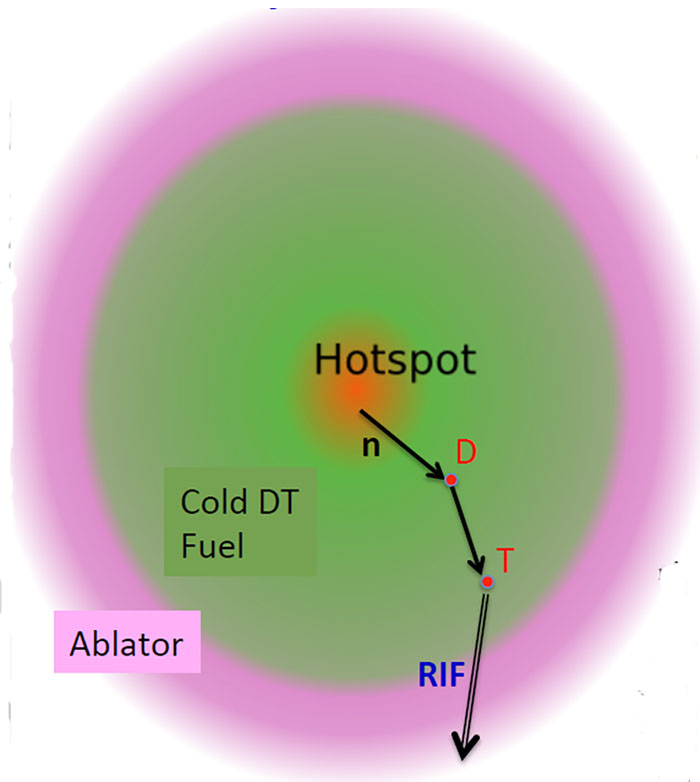 Reaction-in-flight (RIF), or tertiary, neutron production in NIF capsules requires three consecutive steps. The figure displays this schematically. In the first step, a 14-million-electron-volt (MeV) neutron (n) is produced in the capsule’s central hot spot via a deuterium-tritium (DT) fusion reaction. This neutron can elastically scatter with deuterium or tritium ions in the surrounding cold fuel, producing high-energy “knock-on" ions. The knock-on ion then undergoes a second DT fusion reaction in the cold fuel, producing a RIF neutron with energy of up to 30 MeV. The shape and magnitude of the RIF spectrum are determined by the stopping power in the dense cold degenerate fuel.

The RIF experiments, which began in 2012 and continued through 2018, used different laser pulse shapes and both plastic and high-density carbon (diamond) target capsules to vary the plasma degeneracy and thus the stopping power

The studies “demonstrate that you can use these nuclear diagnostic techniques to learn more about the physics conditions that we encounter in our ICF capsule implosions,” said LLNL physicist Tilo Döppner, who helped design the RIF experiments using plastic capsules (see “Nuclear Diagnostics Help Pave the Way to Ignition on NIF”).

For example, the spectrum of RIF neutrons can provide information about fuel-density and stopping-power models, which is crucial for understanding the contribution of alpha heating to the overall energy yield of the shot.

“This puts us in a better position to be more predictive, and eventually more successful, in shooting our ICF implosions on the NIF,” Döppner said.

Döppner noted that measuring RIF neutrons, which make up only a very small fraction (between one in 10,000 and one in one million) of the neutrons produced in a fusion implosion, is “a very, very difficult measurement” because of their low intensity and interference from background gamma rays produced by the 14 MeV neutrons.

In the most recent experiments, the RIF measurements were accomplished by placing thulium and bismuth foils back-to-back in an activation assembly located just outside the target capsule. Exposure to the RIF neutrons altered the decay properties of the thulium and bismuth, which were then assayed by two high-purity clover germanium radiation detectors developed by LANL.

In several shots, two bismuth foils were assayed using both a clover detector and a second detector known as “BIG 8.” Consistency between the assays made with these two independent detectors provides confidence in the measurements, the researchers said.

Döppner, a leader in a NIF Discovery Science campaign studying the properties of brown dwarfs, noted that similarities between an imploded NIF capsule and a brown dwarf are “driving home the point that NIF is able to generate the conditions that we find in stellar objects like brown dwarfs, and that we can use nuclear diagnostic techniques to probe the physics and inform us” about astrophysical conditions.

Brown dwarfs are cool star-like objects that often have insufficient mass to maintain stable nuclear fusion in their interiors. They were not discovered until the 1990s because the near-infrared light they emit is extremely faint. Recent observations by powerful near-IR imaging surveys and adaptive optics cameras, however, indicate that there could be 100 billion or more brown dwarfs in the Milky Way galaxy alone.

The graphic shows the similarity of the density profiles for a NIF cryogenic capsule (left) and an astrophysical brown dwarf. The two systems also have similar temperatures and degrees of quantum degeneracy. The lighter colored region in the capsule, which surrounds the central less-dense hot spot, corresponds to the cold fuel. (Click to expand.)

Over the lifetime of brown dwarfs with one-twentieth of the mass of the sun, “the degree of degeneracy steadily increases and spans a similar degeneracy range to the cold fuels formed at NIF,” the researchers said. “Our results support the screening models applied to partially degenerate astrophysical systems such as young brown dwarfs.

“This bodes well,” they added, “as these models are increasingly being scrutinized through direct radius measurements of brown dwarfs and extrasolar giant planets via binary transit and eclipse observations.

“New cryogenic capsule designs and laser drives are continually being tested at NIF,” the researchers concluded, “so that the degree of partial degeneracy could eventually be varied over a broader range than is studied here. As the total DT yields of NIF cryogenic capsules increase, the uncertainties in the RIF diagnostics will decrease, allowing higher-precision studies of degenerate stopping powers.”