LLNL researchers have reported on their progress in the months-long effort to mitigate the adverse effects on NIF implosion performance of the gossamer-thin membranes known as “tents” that support the target capsule in the hohlraum.

Experiments have shown that the tents cause undesirable distortions of the capsule as it implodes during NIF inertial confinement fusion (ICF) experiments (see “How NIF Targets Work”). The results of tests of several alternative techniques to support the capsules were described in a Physics of Plasmas paper published online on July 23. 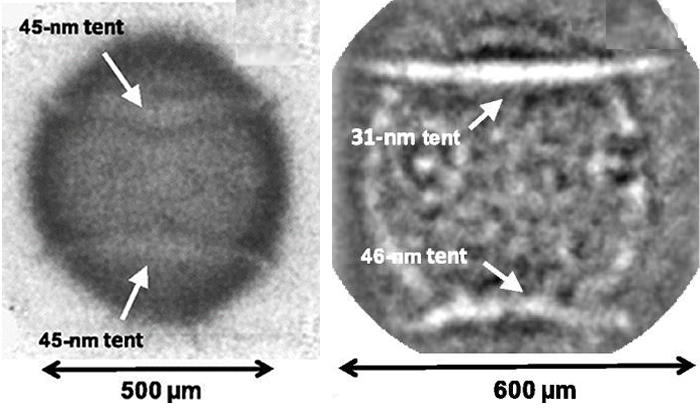 In the paper, LLNL physicist Vladimir Smalyuk and his colleagues from the Laboratory, General Atomics, and Schafer Corp. reviewed the results of experiments using hydrodynamic growth radiography (HGR) and self-backlighting techniques to measure the growth of hydrodynamic instabilities caused by five alternative capsule support methods.

“While some of these methods completely eliminated tents,” the researchers said, “other concepts still used tents, but concentrated on mitigating their impact. The tent-less methods included ‘fishing pole’ reinforced fill tubes, cantilevered fill tubes, and thin-wire ‘tetra-cage’ supports. Other concepts used ‘polar tents’ and a foam shell to mitigate the effects of the tents. These concepts were downselected from more than 30 concepts based on physics and target fabrication considerations, investigated in x-ray radiography experiments, and compared with perturbations from standard tent support.”

The paper also briefly discussed the use of magnetic levitation to support the capsules, a concept currently under development and testing (see “Superconductive Coatings May Float NIF Targets”).

In the “fishing-pole” configuration for capsule support, a 10-micron-diameter fill tube was inserted inside a 30-micron fill tube for extra support, with the connection point located 300  microns away from the plastic capsule surface (a human hair is about 60 microns in diameter). The thicker fill tube was expected to improve the robustness of the capsule mounting to help with target handling and layering of cryogenic deuterium-tritium (DT) fuel. 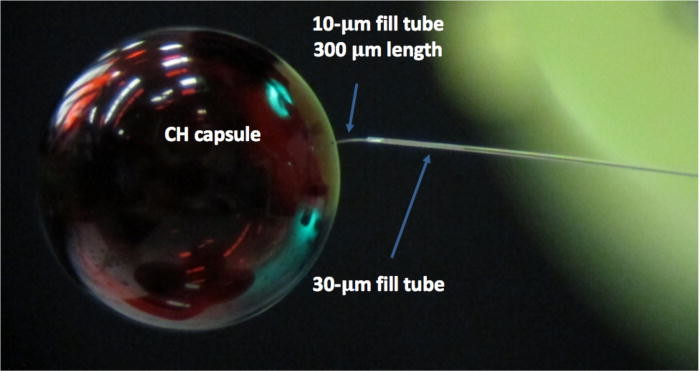 A plastic (CH) capsule with a 10-micron fill tube supported by a 30-micron-thick fill tube offset by 300  microns from the capsule surface in the “fishing-pole” capsule-support configuration.

“The exact evolution of this perturbation will be a subject of future studies,” they said. “It is important to understand and mitigate it since it was shown to have a significant effect on the neutron yield in recent layered DT implosions with HDC (high-density carbon, or diamond) ablators.” 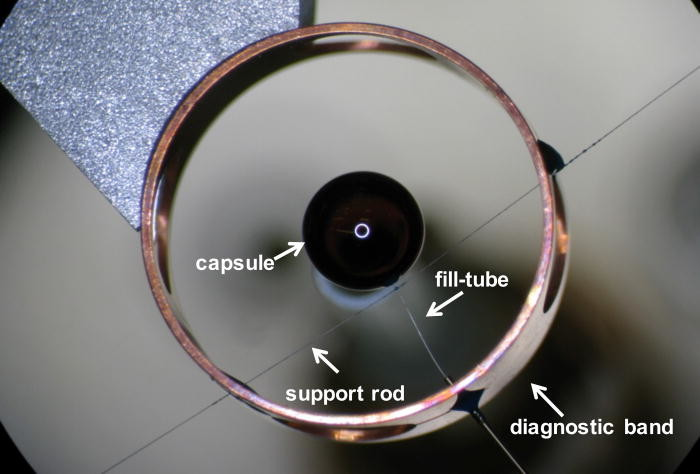 A plastic capsule with a 10-micron fill tube supported by a 12-micron-thick silicon carbide (carborundum) rod, offset from the capsule surface by 300 microns and assembled on the diagnostic band before being enclosed by the hohlraum.

The concept of the “tetra-cage” mounting replaces tents with four 2.5-micron-thick wires (carbon nanotube yarns) that reduce contact area. A pair of parallel wires support the capsule from the top and the other pair of parallel wires, perpendicular to the top pair, support the capsule from the bottom. The overall affected area of four tetra-cage wires is reduced by 5 times compared to two standard tents.

(Left) A plastic capsule supported by four 2.5-micron-thick wires (nanotube yarns) in the “tetra-cage” configuration. (Right) Close-up showing contact details of the wires and the capsule.

Carbon nanotubes for “tetra-cage” targets are produced in a densely packed forest. Individual strands are separated and pulled together into a wedge shape, then twisted into a yarn. Four yarns make up the “tetra-cage” formation, with the capsule suspended between two pairs. Tests of the “tetra-cage” support were encouraging, the researchers said, and preparations for layered DT implosions are under way. In addition, development and testing of roughly 1-micron-thick wires are in progress which may reduce the “tetra-cage” perturbations further in the future. 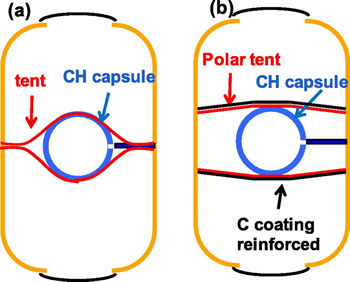 Schematics of the hohlraum with the capsule supported by (left) regular tents and (right) “polar tents” consisting of 43-micron-thick polyimide reinforced by 8-micron-thick carbon coating.

The “polar-tent” concept is based on reducing the contact area between the capsule and the tent. The contact radius was reduced from about 700 to 800  microns in the standard configuration to about 200  microns for the polar tent.

The polar tent consisted of 43-nanometer-thick polyimide foil coated by 8 nanometers of carbon at a density of about 1.8 to 2.0 grams per cubic centimeter to increase its stiffness. The carbon overcoat was on the side of the polar tent away from the capsule. This mitigation method was tested in radiography experiments using a self-backlighting platform and later in layered DT implosions.

The researchers said the polar-tent mitigation technique could not be tested in HGR experiments due to limited field of view of the HGR platform and therefore could not be directly compared to other mitigation techniques. “However,” they said, “x-ray radiography experiments near peak implosion velocity and first tests in layered DT implosions provided a useful first assessment of polar tents.”

In the “foam-shell” concept, the tents were offset from the plastic capsule surface by a 200-micron-thick layer of silicon dioxide foam with a density of 30  milligrams per cubic centimeter in an effort to mitigate their effects. The laser pulse shape was slightly modified for this experiment relative to the nominal pulse by increasing the energy in the first picket (initial shock) and advancing the rest of the drive to compensate for the propagation of the shocks in the added foam layer. 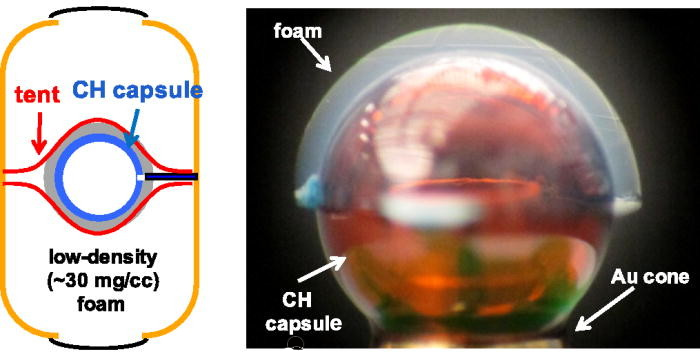 (Left) Schematic of the “foam-shell” hohlraum with the capsule supported by two 30-nanometer tents offset from the capsule by a 200-micron-thick layer of low-density (30  milligrams per cubic centimeter) silicon dioxide foam. (Right) The plastic capsule with the layer of foam mounted on a gold (Au) cone in HGR experimental configuration.

The “foam-shell” HGR experiment showed that tent perturbations were mitigated when the tents were offset from the capsule surface by the foam layer, the researchers said. “However,” they added, “measured 3D broadband perturbations remain a concern for this type of tent mitigation technique. The origin of these 3D perturbations was not quite understood and required further investigations.”

In summary, the researchers concluded that measured perturbations in the “fishing pole,” cantilevered fill tube, and “tetra-cage” concepts were smaller than nominal tent perturbations and were recommended for further testing for feasibility in layered DT implosions. The polar tents were tested in layered DT implosions with a relatively stable “high-foot” (high initial laser pulse) drive showing an improvement in neutron yield in one experiment compared to companion implosions with nominal tents.