The tiny fill-tube used to inject NIF’s high-density carbon (HDC) capsules with cryogenic fuel is also known to reduce the performance of implosions. LLNL researchers, however, are exploring several methods that could diminish these negative effects.

One way could be to drill the fill-tube hole at an angle instead of straight into the HDC capsules used for inertial confinement fusion (ICF) experiments, according to a paper recently published in Physics of Plasmas. 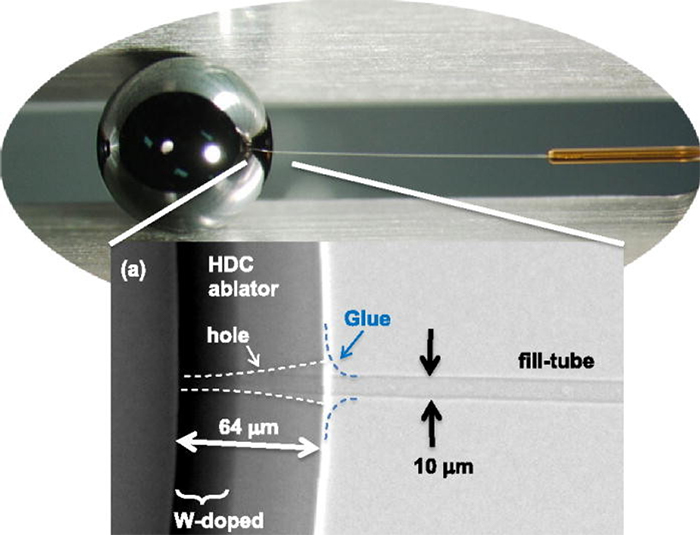 The top photo shows the fill-tube assembly of a round HDC capsule with the fill-tube extending to the right. The bottom graphic is a radiographic close-up of the fill-tube inserted part-way into the ablator layer of the shell. Since the locations of the through-hole and the glue that bonds the fill-tube to the capsule are faint in the radiograph, they have been outlined. (Click to expand photo. Use keyboard arrow keys to view all photos.)

Furthermore, the angled fill-tube could be used in combination with other approaches, including attaching the fill-tube with a glue containing elements such as sulfur and reducing the fill-tube diameter to as thin as 1 micron.

“Adding these things together might be the best solution,” said LLNL physicist Chris Weber, the paper’s lead author.

Fill-tubes are needed to supply the 50/50 mix of deuterium and tritium (DT) fuel into the peppercorn-sized capsule suspended inside a hohlraum. In less a blink of an eye, NIF’s high-energy laser beams hit the hohlraum’s inner walls, bathing the capsule with X-rays and triggering an energy-generating fusion reaction as the frozen layer of DT compresses.

Researchers have long known, however, that the fill-tube is a factor in perturbations that degrade the implosion’s performance, particularly when using diamond ablator shells. Reducing the fill-tube width from 10 microns to 5 microns has helped reduce those perturbations. The smaller fill-tubes, now used for most NIF experiments, helped NIF double its previous fusion neutron yield to 1.9×1016 (19 quadrillion).

Subsequent experiments with 2-micron fill-tubes have not brought a similar bump in implosion performance as going from 10 microns to 5 microns, but researchers believe that’s due to issues that are not related to the fill-tube.

But other fill-tube improvements will be needed “when we get to a better implosion overall,” he said. “So part of what I looked at in the paper is what other things we can try.”

The borosilicate glass fill-tube is inserted partway into a hole that is laser-drilled straight into the wall of the HDC ablator shell, and the tube is affixed on the outside of the shell with a few pico-liters (trillionth of a liter) of glue.

Despite it’s miniscule size, the fill-tube can introduce a “significant” perturbation into the implosion, according to the research. In as little as 2 to 3 nanoseconds, a hole in the ablator rapidly opens and closes. That is still enough time to send a jet of glass, glue, and ablator material into the interior of the implosion--the seed of a perturbation that radiates away some of the precious hot-spot energy needed to move closer to achieving ignition. 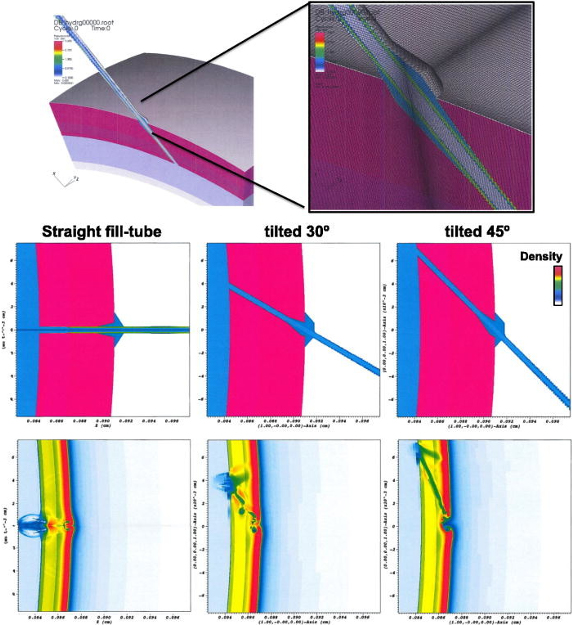 A tilted fill-tube may reduce the jet that injects into the DT ice layer. (Top) Initial setup in a 3D simulation, showing the density and the zone spacing. (Middle) Initial setup from three simulations varying the tilt angle. (Bottom) As the shock wave breaks out of the shell and into the fuel, the jet that injects into the ice through the fill-tube hole is reduced with greater tilt angle.

Still, as the paper notes, “the prospects for improving the fill-tube perturbation seem bright.”

One prospective solution is a fill-tube hole drilled into the shell at an angle instead of straight, Weber said.

“As the implosion proceeds, it ‘sees’ the hole that you have cut into the capsule and that allows the perturbation to go faster down that hole,” Weber said. “And if it’s straight, it can really just continue to jet down in there. So angling that kind of slows it down, makes it basically take a turn before advancing.”

It’s still unclear what happens then. So far, scientists have only been able to accomplish 3D simulations of the very early stages of the implosion because “these (computations) are too big to continue all the way through,” Weber said.

Experiments now planned to use a time-resolved spectrometer will provide better measurements of the radiation emitted by the mix of material the fill-tube injects during later stages.

Those measurements will provide a movie-like series of images showing “when the mix is actually getting in and what it is doing,” Weber said. “We’re hoping what we see in these early stages of the simulation will provide a benefit all the way through the end, but we really don’t know at this point. It’s going to be a good test.”

Researchers have also found that adding a little extra glue on the outside of the capsule to the adhesive holding the fill tube in place helps reduce perturbations. While that seems counterintuitive, Weber said the added glue seems to make up for the deficit of material caused by drilling the fill-tube hole.

ICF experiments try to push the fuel capsule inwards evenly from all directions. If you think of the capsule as a water balloon, the extra glue acts “like poking a finger through a hole,” Weber said.  “The extra glue patches the hole a little, delaying the entry of material into the center of the implosion. If you get it right, the simulations show you can basically counteract that initial hole and get rid of much of the damage,”

The paper noted that researchers believe that a dopant with a mid-Z atomic number mixed into the adhesive could help, as it would cause the glue to burn away at a slower rate during the ablation process. The mixture could have a similar effect as having a larger mass of glue—slowing the jet of material that would be injected into the hot spot. 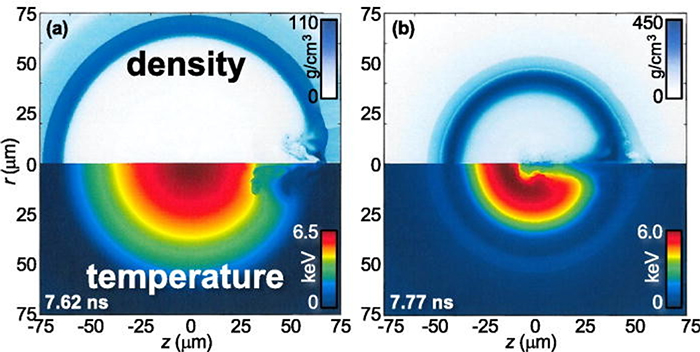 In this simulation of the fill-tube near bang time, the upper images show density and the lower images show temperature. In figure (a), 150 picoseconds before bang time, the fill-tube appears as a small perturbation on the right edge of the hot spot. By bang time (b), the mix mass has continued inward, creating a dense–cool jet of material that reaches the center.
According to simulations, increasing the opacity of this adhesive effectively “plugs the hole” and reduces the penetration of the fill-tube caused jet into the capsule hotspot.  These simulations predict at least a 30 percent increase in capsule neutron yield because of this reduced hotspot perturbation.

Fill-tube assemblies using the sulfur-doped adhesive have been constructed and tested for gas-tight integrity by General Atomics and tested by LLNL for leakage and handling. The next step would be an experiment on NIF.

Overall, the research points to using a combination of the angled fill-tube, the new type of glue, and a smaller fill-tube hole.

“Adding these things together might be the best solution,” Weber said.