The laser guide star revolutionized astronomy by revealing large swathes of the sky that had previously been unseen from Earth due to atmospheric distortions. Now astronomy is on the verge of another great leap forward. The Extremely Large Telescope, which is expected to see first light in 2024, will have a 39-meter-diameter primary mirror—more than three times the size of today’s largest ground-based telescopes. 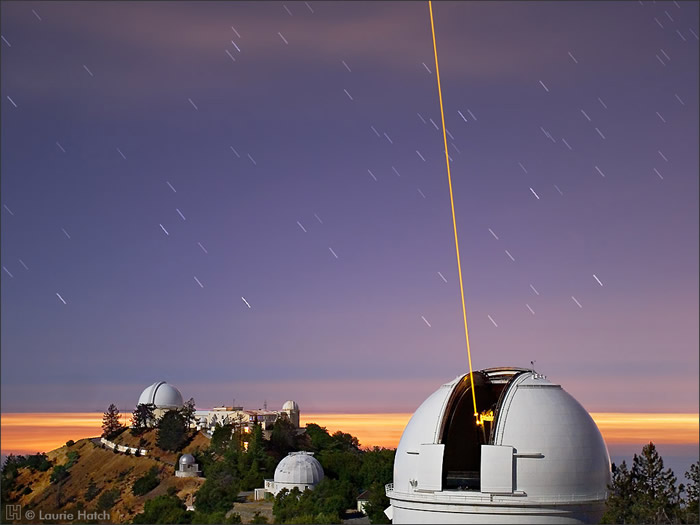 The Lick Observatory’s Laser Guide Star forms a beam of glowing atmospheric sodium ions. This helps astronomers account for distortions caused by the Earth’s atmosphere so they can see farther and more clearly into space. Credit: Laurie Hatch/lauriehatch.com

“This fiber-based sodium laser guide star is a significant advance for adaptive optics,” said Daren Dillon, a development engineer at UC Santa Cruz. “We expect it to operate five to ten times more efficiently than the state-of-the-art dye-based sodium laser guide stars we use at our observatories now. This will enable our adaptive optics to produce much sharper images.”

The project has roots in LLNL’s long history of laser development. Claire Max, a UC Santa Cruz astronomy professor and director of UC observatories, was a physicist at LLNL from 1974 to 2004. She co-authored the original paper proposing sodium guide star lasers for wavefront correction. In the early 1990s she demonstrated the first high-power sodium laser guide star from technology developed in LLNL’s Atomic Vapor Laser Isotope Separation program. Max was the driving force for integrating sodium guide star laser systems into the astronomical community worldwide.

To the naked eye, stars appear to twinkle. This is not through any action on the part of the celestial objects, but rather due to atmospheric turbulence—the turbulent mixing of Earth’s atmosphere—that the light rays pass through on their long journey to the eyes of night watchers.

This star provides a reference point for an advanced optics system, which uses it to inform a computer-controlled deformable mirror that cancels out the effects of atmospheric turbulence to create a sharp image.

The first generation of sodium laser guide stars, deployed at the Lick Observatory in northern California and the Keck Observatory in Hawaii, were dye lasers that served the astronomy community for more than 15 years. Their size, weight, and power and cooling requirements, however, made them difficult to incorporate with the telescopes, and they utilized flammable materials, which are also undesirable in an observatory setting.

About 15 years ago, Max made a request of her LLNL colleagues.

“She asked us for a solid-state guide star laser that was compact and reliable,” explained Dee Pennington, one of the principle investigators on the project. “We considered several options and settled on a fiber laser because they are efficient, compact, and rugged.”

A fiber laser typically is constructed with an optical fiber doped with rare-earth elements such as erbium, ytterbium, and neodymium. These lasers have unmatched beam quality, efficiency, thermal management, and reliability as well as lower cost of ownership.

The project was first funded by Livermore’s Laboratory Directed Research and Development program and later by grants from the National Science Foundation Center for Adaptive Optics, which Max directed, the Association of Universities for Research in Astronomy, and the European Southern Observatory.

At the project’s inception more than 15 years ago, fiber lasers were still an emerging technology. None existed at the 589-nanometer (nm) wavelength needed to interrogate the sodium layer.<

Developing this fiber laser with UC Santa Cruz meant the researchers had to invent technology. “We had to learn how to cool a fiber laser,” said LLNL materials scientist Steve Payne, another researcher on the project. “If you’re first out of the box, you have to figure everything out on your own.” 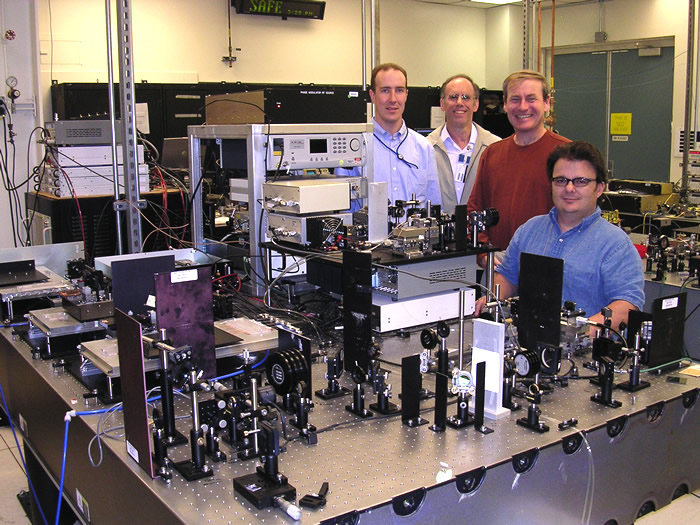 The team achieved 589 nm by combining a 938-nm laser and a 1,583-nm laser within a nonlinear crystal. Power scaling proved to be an even bigger challenge.

“We were trying to scale two lasers to provide 10 watts of power, the minimum necessary to get enough feedback to inform adaptive optics,” said Jay Dawson, the principle investigator in the later years of this project. Dawson has continued working on fiber laser technology in his current role as the NIF&PS acting deputy program director for DoD Technologies.

Because of the laser’s very specialized application, custom optical fibers needed to be developed. LLNL did this in collaboration with existing specialty optical fiber companies.

“However, industry was very slow to manufacture the fiber we needed,” said Dawson. “They had little motivation, since few R&D fibers turn into significant commercial sales. We realized that if we wanted to advance fiber laser technology for a wide array of applications, LLNL would need its own fabrication capability.”

As a result, LLNL built its own 8.2-meter Fiber Draw Tower to fabricate the needed specialized fibers. In addition to meeting this need, the draw tower has been the key to success on other important projects. It enabled development of fiber-optic acoustic sensing fibers and the E-band fiber-optic amplifier, two technologies that are revolutionizing laser sensing and communications.

To correct ground-based telescopes with primary mirrors in the 30-meter-diameter range, laser guide stars will be essential. “However, a single guide star laser can only interrogate part of the telescope aperture,” said Pennington. “With the huge apertures we anticipate, it will take multiple guide stars to inform adaptive optics for everything the telescope collects.” But discriminating the feedback from each individual beam creates a challenge.

“One answer is to use pulsed laser guide stars, which allows discrimination by time,” said Pennington. This was the focus of the LLNL fiber guide star laser program.

UC Santa Cruz astronomers plan to install the fiber-based sodium laser guide star at the Lick Observatory in the spring of 2019. It will be run alongside the existing dye-based sodium Laser Guide Star.

“We are pretty excited to see what happens when we integrate this fiber-based sodium laser guide star into our adaptive optics system at Lick,” Dillon said. “We think it will produce more detailed images that allow more precise measurements.”

This technology transfer to UC Santa Cruz has been a long time in the making. That journey also reflects the advances in fiber laser technology. “As a community, the progress we’ve made is amazing,” said Pennington.

NIF and General Atomics engineers have created an inertial confinement fusion (ICF) fuel capsule with a 2-micron-diameter fill tube—and along the way, found a solution to a “Bay Bridge”-like dilemma that could have dramatically slowed the process of fabricating NIF capsules. 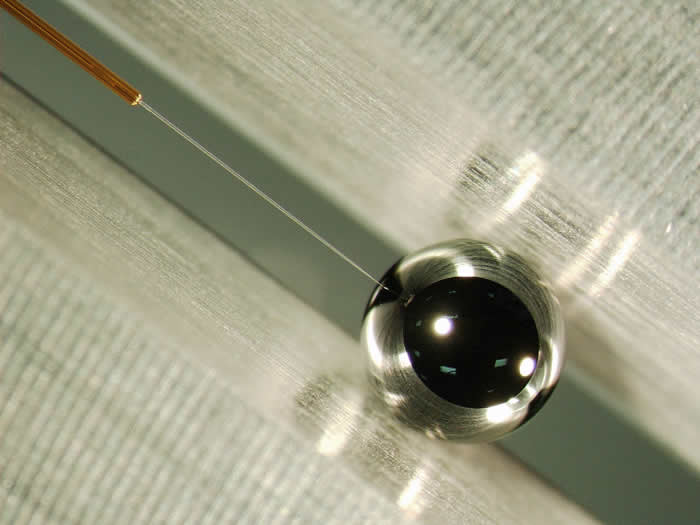 A 2-micron fill tube is inserted into the fuel capsule. Credit: General Atomics

In November, NIF conducted the first test of a 2-micron tube used to inject hydrogen fuel into a target capsule. The tiny tube worked as designed and reduced the footprint of the 5- and 10-micron tubes that were shown to cause problems in NIF implosions.

The slim glass tubes also fit into fuel capsules made with a different technique, called pressure cycling, which was new for this application. That cut manufacturing time from a projected six months to about two days.

Both improvements are important steps toward achieving NIF’s stockpile stewardship mission; ICF is a key aspect of ensuring the safety, security, and reliability of the nation’s nuclear weapons.

“Now we’re going to see how much better it gets when you make the fill tube even smaller,” said Deputy Program Manager Michael Stadermann. “Going from 10 to five (in earlier experiments) was a big improvement in performance.”

The fill tubes are used to inject a deuterium and tritium (DT) fuel mixture into a peppercorn-sized spherical shell suspended inside a hohlraum. NIF’s 192 high-energy laser beams hit the hohlraum’s inner walls, generating x rays that trigger a fusion reaction as the DT mixture compresses into an energy-generating hot spot.

But researchers previously determined through shot data and computer simulations that 10-micron fill tubes, while only about one-sixth the average diameter of human hair, were a factor in perturbations that degraded NIF’s implosion performance, particularly in experiments using diamond ablator shells.

“Ideally when you do an experiment on NIF, you want to have a flawless round shell that has the fuel inside,” Stadermann said. “Any kind of deviation from perfect leads to perturbations, which in turn can reduce the amount of fusion we can get.”

The fill tube, he explained, leads to a “small conundrum. We have to get the fuel inside the capsule, but at the same time, when we put a fill tube in, we create an imperfection.” 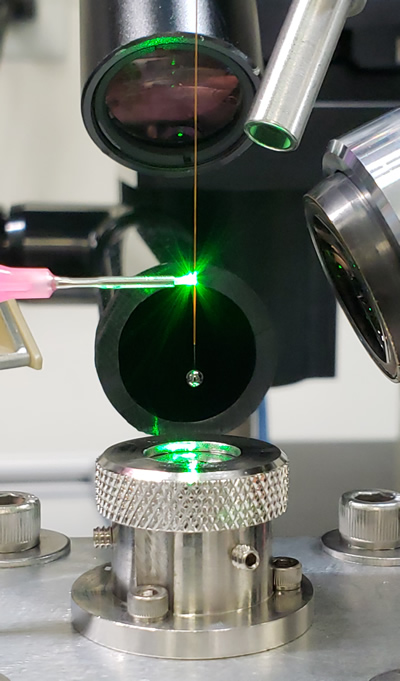 The round fuel capsule is at the end of the fill tube, which tapers down to 2 microns in the shell. Credit: General Atomics

Reducing widths from 10 microns to 5 microns helped. Earlier this year, NIF achieved a total fusion neutron yield of 1.9×1016 (19 quadrillion), double the previous record. The complexity of slimming the fill tubes, however, increased the manufacturing time of capsules from about one week to about four weeks.

Diamond Materials GmbH in Germany makes diamond shells by overcoating a silicon ball mandrel with high density carbon. At General Atomics in San Diego, a mixture of nitric and hydrofluoric acid is injected through a hole drilled for the fill tube. The acid etches out the mandrel’s material, eventually leaving just the diamond shell, which is then attached to the fill tube to form capsule fill tube assemblies.

With wider fill holes, the acid-dissolved mandrel would exit by diffusion through the hole within a few days. The move to 5-micron fill tubes, however, required smaller laser-drilled fill holes, which increased the diffusion time.

“The narrower you make that opening, the harder it is to get the dissolved mandrel out,” he said. “It’s like having an eight-lane highway that goes into San Francisco and suddenly you cut it down to four lanes. You’re still trying to get the same number of cars into the city every day, so you’re going to have a traffic jam and it’s going to take a lot longer for everybody to get in.”

When contemplating a slimmer tube about a year ago, LLNL and General Atomics engineers made a disheartening calculation: Based on the exponential time increase involved in going from 10 microns to 5 microns, making the capsule accomodate a 2-micron tube could take as long as six months.

“That was unbearable, obviously,” Stadermann said.

“When the idea of 2-micron fill tubes was floated around, we joked that we would all be retired by the time one shell was finished leaching,” he said.

With pressure cycling, the shell is placed in a small vial inside a pressurization vessel. The pressure is increased to as much as five atmospheres, shrinking the gas bubble that forms inside from the etching process and sucking in fresh acid. The vessel is then depressurized, which expands the bubble and pushes out the unwanted mandrel material. The cycle is repeated until the remaining material has flowed out.

“We were able to reduce this etching process from six months to several days for the 2-micron hole, at the same time shortening the time for 5-micron drill holes to less than a day from about a month,” Stadermann said.

The team also had to ensure the fragile 2-micron tubes could be made and assembled with the capsule. The tube’s 2-micron portion is only about a millimeter long and connects to a longer portion that tapers out beyond the capsule to about 40 microns in diameter.

But the vendor that made the 5-micron tube could not supply a thinner version. Jay Crippen, engineering manufacturing liaison for the General Atomics Inertial Fusion Technologies division, worked with other vendors to qualify a new source. 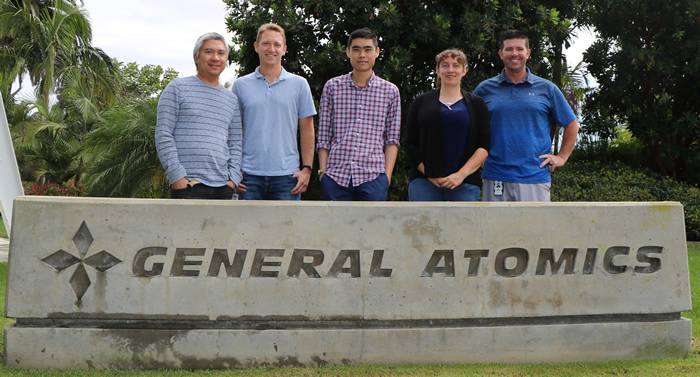 The team also had to test the glue that holds the tube in place as fuel is pumped in and cryogenically frozen, said Crippen, who Stadermann praised as a “wizard of assembly.”

Two targets with 2-micron fill tubes have been assembled at LLNL to assure they will survive the process. While the team is refining manufacturing and handling procedures, its members are confident the process can become routine within the next year.

“We knew there was going to be a learning curve,” Crippen said.