Tracking the Causes of Energy Loss in NIF Implosions

A variety of factors can affect the performance of inertial confinement fusion (ICF) experiments on NIF, and they all happen within a few billionths of a second of each other. They include the symmetry—or asymmetry—of the fusion fuel as it implodes; perturbations caused by “engineering features” like the tube used to fill the target capsule with fuel and the thin membrane, or “tent,” that suspends it inside the hohlraum; and the mixing of capsule material with the fuel as a result of hydrodynamic, or fluid, instabilities (See “How NIF Targets Work”).

Now LLNL researchers and their colleagues have developed a technique for estimating the relative extent to which each of those factors can interfere with the successful outcome of a NIF ICF experiment. The new “enhanced self-emission” technique, coupled with a high-resolution x-ray microscope, has produced the clearest picture yet of how much energy is lost due to each individual factor. The results were reported in a Physics of Plasmas paper published online on May 3. 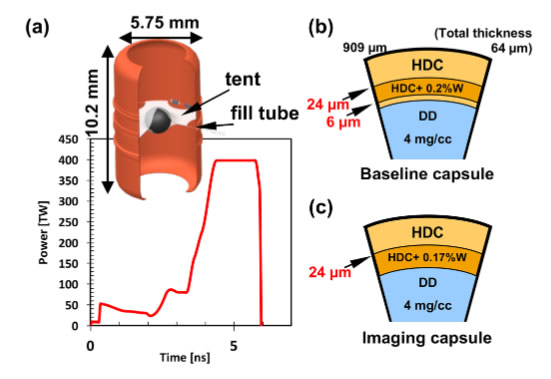 Schematic of the target for an enhanced self-emission experiment shows (a) the uranium hohlraum and the three-shock laser pulse shape with a peak power of 360 terawatts and a total energy of 1.1 megajoules. The high-density-carbon (HDC) capsule, support “tents,” and a fill tube are also shown. The schematics of capsules show (b) normal tungsten-doped layers in the baseline configuration and (c) a tungsten-doped layer extended to the inner shell surface in the self-emission imaging configuration.

The self-emission technique provides images of asymmetries and perturbations around the time of an implosion’s peak compression by using x rays emitted by the capsule’s inner shell, as opposed to x rays produced by an external source such as a backlighter. The new technique complements the argon self-backlighting radiographic technique previously used to study implosion instabilities (see ““Measuring Instabilities in NIF Implosions at Peak Velocity”).

To produce the x rays, the researchers placed a layer of high-density carbon (HDC) “doped” with a small amount of tungsten on the inner layer of an HDC target capsule. When the capsule imploded, the tungsten-doped layer emitted bright x-rays that revealed the unique signatures of the engineering features and asymmetries.

“The combination of the enhanced x-ray signature from the shell and the neutron signature from the deuterium gas inside the capsule is very powerful,” said LLNL physicist Louisa Pickworth, the paper’s lead author. “We were able to link the amount of x-ray radiation that we observed coming out of the hot spot with the degradation in the (neutron) yield. It was a really nice measurement, and it was fun to pick apart all those different signatures. It took a little bit of detective work to separate everything out, but I think it came together very nicely.

“One of the nice things about these experiments,” she added, “was that we used our high-resolution diagnostic, the Kirkpatrick-Baez Optic (KBO) microscope (see “Promising New X-ray Microscope Poses Logistics Challenges”). This was the first experimental application of that diagnostic. The images from the KBO are resolved in time, so it’s taking snapshots as the implosion’s progressing, and we can see a lot of different features due to the better spatial resolution and the enhanced self-emission technique.”

Time sequence of equatorial x-ray images from an enhanced self-emission experiment measured with the Kirkpatrick-Baez Optic microscope. The locations of the perturbations from the fill tube (FT), and the tents are indicated in (b). The direction of the non-radial fuel velocity is towards the top left-hand corner of the images. The time of the images relative to the time of peak x-ray emission is shown at the bottom of each image.

Along with linking the individual factors to neutron yield degradation, the experiment revealed that the implosion’s extremely high non-radial fuel velocity resulted in uneven heating in the capsule. “This particular implosion is moving very quickly in one direction,” Pickworth said, “and we showed that the x-ray emission is skewed to that velocity, so that the hot spot, the hot deuterium inside, is pushing up against the shell. That portion of the shell is getting preferential heating, and the portion of the shell away from the region that the hot spot’s moving in is not being heated as strongly.” That finding could have relevance for future efforts to achieve ignition on NIF, which depend on the ability of the fusion reactions in the hot spot to spread heat into the colder outer layers of fuel and ignite additional fusion reactions.

The researchers said the experiments showed that the enhanced self-emission radiation losses of about 400 joules from the hot spot resulted in a roughly 50 percent reduction in neutron yield. They added that in a subsequent experiment “with a significantly increased level of short-mode initial perturbations, shown through the enhanced imaging technique to be highly organized radially,” the neutron yield dropped an additional 50 percent.