Data correlating two factors that lead to implosion asymmetries have brought LLNL scientists a step closer to understanding the gap between simulations and performance of inertial confinement fusion (ICF) experiments at the National Ignition Facility (NIF).

These experiments aim to ignite a propagating fusion burn wave in deuterium-tritium fuel. To achieve ignition, the fuel must reach a self-heating state in which the energy produced exceeds energy loss from expansion, thermal conduction, and radiative cooling.

The best-performing ICF implosions, with central hot-spot pressures of 360 Gbar (billion Earth atmospheres) and fusion yields of 50 kilojoules, have begun to show the effects of fusion self-heating. But these experiments still underperform 1 and 2D simulations, which predict pressures above 500 Gbar and dynamics dominated by self-heating. 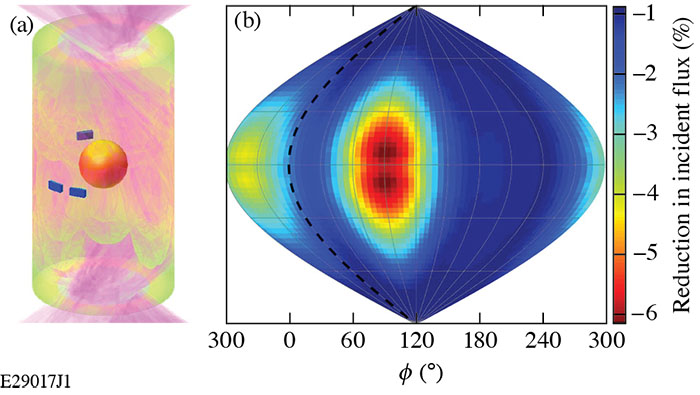 (a) Model of the capsule in a laser-irradiated hohlraum from view angle (65°, 120°). Typical size and position of diagnostic windows are shown in blue. (b) Calculated reduction of radiation flux on the capsule in a 3-window hohlraum, assuming complete radiation loss through the windows. (Click to expand)

By analyzing data from several years of high-yield NIF ICF experiments, researchers have found a correlation between the velocity of the hot-spot implosion and the asymmetry of fuel areal-density (the combined thickness and density of the imploding frozen fusion fuel shell).

The results were reported in a Physical Review Letters paper by Laboratory for Laser Energetics physicist Hans Rinderknecht (who performed this work while a Lawrence Fellow at LLNL), LLNL physicist Dan Casey, and LLNL colleagues.

“We know that asymmetry is a principal degradation of implosion performance,” said Casey. “We found that 3D asymmetry does exist and is correlated between two key measurements. These results lay the foundation for subsequent work to track down the sources of the asymmetries.”

The correlation was consistent across a wide range of shot and target configurations, including shots from the high-density carbon (HDC), “BigFoot” (high-adiabat, or reduced compression, HDC), and traditional CH (plastic capsule) campaigns.

“We found that most of the implosions performed in the last three years of the ICF program on NIF had an unintentional asymmetry that ‘pushed’ the implosion to one side instead of imploding it uniformly. This meant that some of the energy was wasted,” said Rinderknecht.

The striking coincidence of magnitude and direction between the hot-spot velocity and the asymmetry of the fuel areal-density across a wide range of experiments with varied ablator composition, laser-power history, and other factors suggests a common, systematic underlying cause. The implosions tended to be pushed towards the diagnostic windows in the hohlraum. Those windows are covered by thinner gold layers that allow x-ray cameras to see the capsule inside the hohlraum.

The researchers applied their analysis method to 44 implosions of cryogenic deuterium-tritium ice layers performed on NIF between 2016 and 2018. The hot-spot movement direction was observed in 17 out of 18 HDC, 10 of 11 Bigfoot, and 6 out of 15 CH implosions.

“It’s a classic story of how two datasets are better than one,” said Rinderknecht.

NADs record how many fusion-produced neutrons make it out of the implosion without scattering. This diagnostic, therefore, can determine the density variations of fuel in various directions.

However, NADs can also be affected by the Doppler shift: if the implosion is moving toward the detector, the neutrons get an energy boost and the signal is therefore increased because of the energy dependent NAD activation cross-section. The nTOF spectrometers also measure the neutron Doppler shift. 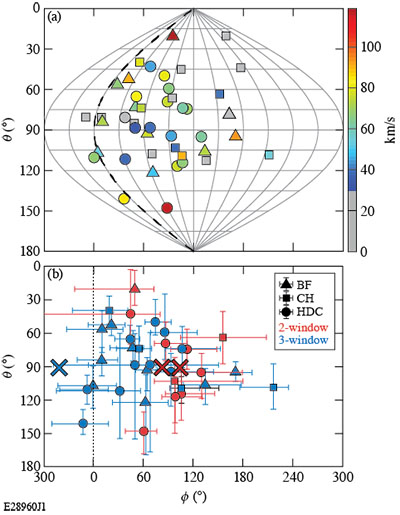 Diagnostics are the only way to observe what is actually happening in the implosions, but they can be flawed or misunderstood. “When you start collecting and interpreting data, it’s easy to get into arguments about whether what you’re seeing is real or not, especially if the result is surprising,” Rinderknecht said.

“Once I had both sets of data, I started plotting them together — hot-spot velocity versus density asymmetry — and the shared pattern popped right out,” he said. “The two supporting datasets from two different and independently vetted diagnostics confirmed one another across so many shots with such different conditions, it became clear that something real and significant was going on.”

“On the basis of these data a research program has been initiated to find and control the origins of the drive asymmetry, which remains a crucial step for ongoing efforts to achieve ignition on the NIF,” the researchers said in the paper.

“Work to identify and control the source of this asymmetry is ongoing and will be essential to further improving implosion performance and achieving ignition in indirect-drive ICF,” said the researchers.

“On the Threshold of a Critical Milestone,” Science & Technology Review, April 2019