Studies Provide New Insights into the Formation of ‘Super-Earths’

NIF, the world’s largest and highest-energy laser, is designed to perform experimental studies of fusion ignition and thermonuclear burn, the phenomenon that powers the sun, the stars, and modern nuclear weapons. As a key component of the National Nuclear Security Administration’s Stockpile Stewardship Program, experiments fielded on NIF enable researchers to gain fundamental understanding of extreme temperatures, pressures and densities—knowledge that helps ensure the current and future nuclear stockpile is safe and reliable. 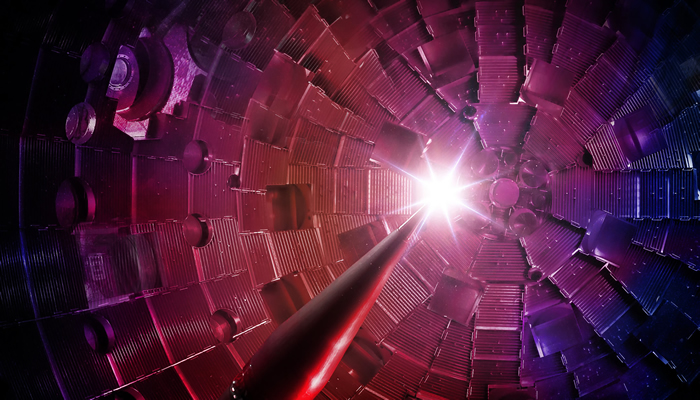 This rendering of the inside of the NIF Target Chamber shows the target positioner moving into place. Pulses from NIF’s high-powered lasers race through the facility at the speed of light and arrive at the center of the target chamber within a few trillionths of a second of each other, aligned to the accuracy of the diameter of a human hair.

The record-breaking experiments utilized a diamond capsule—a layer of ultra-thin high-density carbon containing the deuterium-tritium (DT) fusion fuel—seated inside a depleted-uranium hohlraum. This approach allowed the researchers to greatly improve their control over the symmetry of the x rays that drive the capsule, producing “rounder” and more symmetric implosions.

“These results represent significant progress,” said Sebastien Le Pape, lead author of the paper and lead experimenter for the campaign. “By controlling the uniformity of the implosion, we’ve improved the compression of the hot spot leading to unprecedented hot-spot pressure and areal density.”

In addition to increased yield, the experiments produced other critical results. For the first time, the hot-spot pressure topped out at approximately 360 Gbar (360 billion atmospheres)—exceeding the pressure at the center of the sun. Further, these record yields mean there was a record addition of energy to the hot spot due to the effect of alpha particles (helium nuclei) produced by the fusion reactions.

By depositing their energy in the assembled fuel rather than escaping, the alpha particles further heat the fuel, increasing the rate of fusion reactions and thus producing more alpha particles. This leads to yield amplification, which in these experiments was nearly a factor of three. As the implosions are further improved, this yield amplification could eventually lead to fusion ignition, which occurs when the fusion reactions produce more energy than the energy absorbed by the fuel.

“Because of the extreme levels of compression that these implosions have achieved, we are now at the threshold of achieving a ‘burning plasma’ state, where alpha-particle deposition in the fusing plasma is the dominant source of heating in that plasma,” said Omar Hurricane, chief scientist for the ICF Program.

“Each experiment we do unlocks important data that informs how we design and field future experiments,” added NIF Director Mark Herrmann. “These results represent a significant advancement in our knowledge and will enable our next steps in tackling the difficult scientific challenge of ignition.” 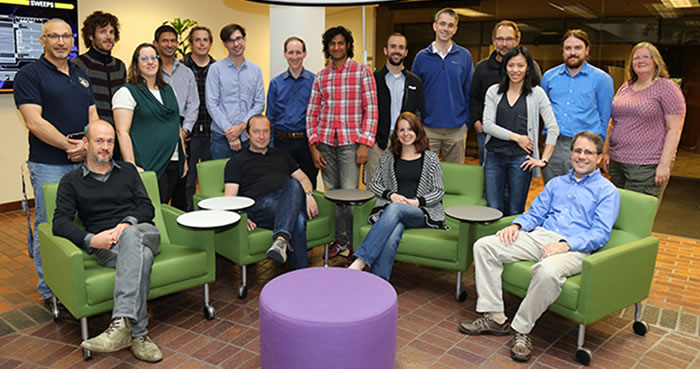 In addition, the experiments achieved conditions that now enable access to a range of nuclear and astrophysical regimes. The density, temperature and pressure of the hot spot are the closest to conditions in the sun, and the neutron density is now applicable for nucleosynthesis studies, which have traditionally needed an intense, laboratory-based neutron source. The conditions also are relevant for studying fundamental nuclear weapons physics.

Additional experiments have shown similar levels of performance, confirming the importance of this approach. Looking ahead, LLNL plans to advance its experiments by exploring increased capsule size, energy delivery on NIF, and improvements to features such as the fill tube used to inject fuel into the target capsule.

“Every time we make progress, we can better understand what challenges lie ahead,” said Laura Berzak Hopkins, lead designer for the experiments. “Now, we’re in an exciting place where we understand our system a lot better than before, and we’ve been able to take that understanding and translate it into increased performance. I’m very excited about the progress we’ve been able to make, and where we can go next.”

Studies Provide New Insights into the Formation of ‘Super-Earths’

The odds that giant Earth-like planets outside our solar system could support life just got a little better.

Recent studies by LLNL researchers and their colleagues suggest that the early-stage formation of these “super-Earths” could result in the presence of liquid water near the surface, as well as a magnetic magma ocean at the core. Along with an atmosphere and a mild climate, liquid water and a magnetic field to protect against radiation are considered necessities for the evolution of life as we know it. 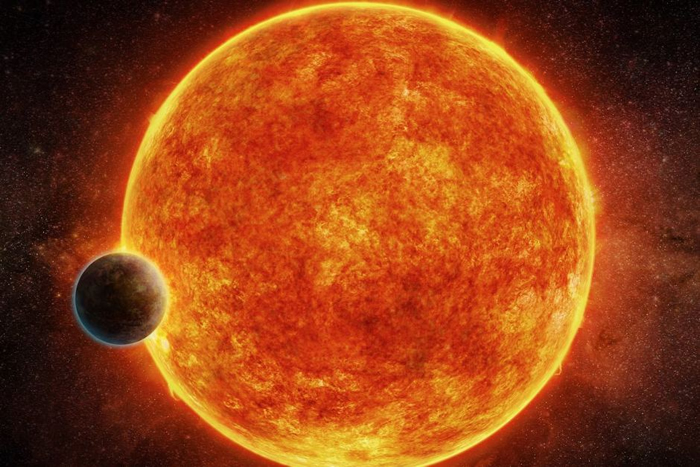 Artist’s impression of “Super-Earth” planet LHS1140b orbiting a red dwarf star just 40 light-years away in the constellation of Cetus. The potentially rocky planet is 1.4 times the size and seven times the mass of Earth, and sits within the star’s habitable zone. Researchers have calculated that billions of the stars in the Milky Way have one to three planets in the “Goldilocks zone,” where there is the potential for liquid water and where life could exist. Credit: M. Weiss/CfA

As astronomers discover more and more Earth-like planets in the “Goldilocks zone” of other solar systems—in orbits where it’s not so hot that water boils away, and not so cold that it’s perpetually frozen—scientists are increasingly intrigued by the possibility that the evolution of some of these terrestrial planets could result in conditions conducive to life.

Extrasolar planets are too far away to detect the presence of water or a magnetic field directly, but laboratory shock-compression experiments using high-energy lasers allow researchers to make inferences about the planets’ “melting curve”—how their primordial liquid magma oceans might cool during the early stages of their evolution.

Using the OMEGA laser facility at the University of Rochester, the researchers measured the thermodynamic properties of samples of enstatite, or magnesium silicate (MgSiO3), a common mineral found in rocks on Earth and in the mantle of terrestrial exoplanets. The experiments exposed the samples to pressures of about 230 gigapascals (2.3 million Earth atmospheres) until they liquified, then boosted the pressure to more than 380 GPa to determine their equation of state and other characteristics.

“We were able to measure some fundamental properties about how the liquid evolves with temperature and pressure,” said LLNL physicist Dayne Fratanduono, lead author of a Physical Review B paper reporting on the new research that was published online on June 21. “We were then able to say some things about super-Earths—how shallow their melt lines are or how steep their melt lines are. Which then, as these large planets cool, gives you some indication of how the magma ocean would evolve, whether or not you may have a solid or a liquid core, and which types of super-Earths may support life and which ones may not.”

Contrary to simulations and previous studies, the findings suggest that “complete freezing of a deep silicate magma ocean could occur over a potential temperature range of only a few hundred degrees,” the researchers said. “Having such a small range of potential temperature that separates a mostly liquid from a mostly solid planet,” they said, “would imply that the planet would solidify rapidly, trapping the water that will be required to facilitate prebiotic chemistry on a potentially habitable super Earth.”

“We think that in very large planets (three to 10 times the mass of Earth), for a very small temperature change the magma might freeze at once,” said Fratanduono, “and as a result would be more likely to capture water close to the surface.”

Magnetic fields are essential for life because they deflect harmful charged particles from the sun and cosmic rays that constantly bombard a planet and prevent the solar wind from eroding the atmosphere (see “Probing the Possibility of Life on ‘Super-Earths’”). “To generate a magnetic field,” Fratanduono said, “you could have a magma ocean that is magnetic. You need a certain specific heat, and the specific heat for enstatite is high enough that a convecting magma core may be able to support a magnetic field.

“It (this research) is a tiny piece of the puzzle,” he said. “That’s what we as scientists try to do—fill in the missing pieces. It’s pretty exciting, when the Kepler space mission is constantly discovering new super-Earths almost daily. It’s an exciting time.”

Joining Fratanduono on the paper were LLNL colleagues Marius Millot, Rick Kraus, Peter Celliers, and Jon Eggert, along with Dylan Spaulding of the University of California, Davis, and Rip Collins of the Laboratory for Laser Energetics at the University of Rochester.

In a Proceedings of the National Academy of Sciences (PNAS) “Special Feature” paper published online on June 26, LLNL and University of Michigan researchers reported on recent experiments and techniques designed to improve understanding and control of hydrodynamic (fluid) instabilities in high energy density (HED) settings such as those that occur in inertial confinement fusion implosions on NIF. 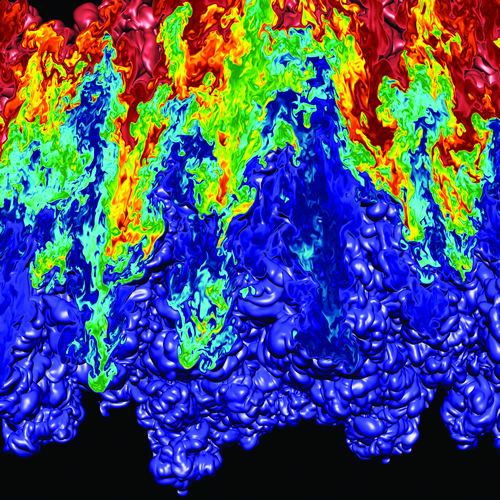 This paper described four areas of HED research that focus on Rayleigh-Taylor (RT) instabilities, which arise when two fluids or plasmas of different densities are accelerated together, with the lighter (lower density) fluid pushing and accelerating the heavier (higher density) fluid.

These instabilities can degrade NIF implosion performance because they amplify target defects as well as perturbations caused by engineering features like the “tents” used to suspend the target capsule in the hohlraum and the fill tube that injects fusion fuel into the capsule.

Conversely, RT and its shock analog, the Richtmyer-Meshkov instability, are seen when stellar explosions (supernovae) eject their core material, such as titanium, iron, and nickel, into interstellar space. The material penetrates through and outruns the outer envelopes of the lighter elements of silicon, oxygen, carbon, helium, and hydrogen. In addition, a unique regime of HED solid-state plastic flow and hydrodynamic instabilities can occur in the dynamics of planetary formation and asteroid and meteor impacts.

The PNAS paper presents summaries of studies of a wide range of HED RT instabilities that are relevant to astrophysics, planetary science, hypervelocity impact dynamics, and inertial confinement fusion (ICF).

The researchers said the studies, while aimed primarily at improving understanding of stabilization mechanisms in RT growth on NIF implosions, also offer “unique opportunities to study phenomena that typically can be found only in high-energy astrophysics, astronomy, and planetary science,” such as the interiors of planets and stars, the dynamics of planetary formation, supernovae, cosmic gamma-ray bursts, and galactic mergers.

NIF HED experiments can generate pressures up to 100 terapascals (one billion atmospheres). These extreme conditions allow research samples to be driven, or compressed, to the kinds of pressures found in planetary interiors and the interiors of brown dwarfs (sometimes called “failed stars”). They also lend themselves to studies of RT evolution ranging from hot, dense plasmas and burning hot spots at the center of ICF implosions to relatively cool, high-pressure materials undergoing solid-state plastic flow at high strain and strain rate.

“We found that the material strength in these high-pressure, solid-state, high-strain-rate plastic flow experiments is large and can significantly reduce the RT growth rates compared with classical values,” the researchers said. “These results are relevant to planetary formation dynamics at high pressures.

“An intriguing consideration,” they added, “is the possibility of using these findings to enhance resistance to hydrodynamic instabilities in advanced designs of ICF capsule implosions.”