NIF implosions are complex and inherently 3-D, so it’s not surprising that researchers need comprehensive and realistic 3-D simulations to understand and correct for the wide variety of factors that have so far thwarted NIF’s ability to achieve ignition.

LLNL researchers described the results of several years of effort to develop a modeling capability “reliable enough to guide NIF experiments to ignition” in a featured Physics of Plasmas paper published earlier this year. The paper summarized the current state of 3-D modeling of recent high-performing NIF implosions and suggested further improvements in modeling and measurement techniques that could increase understanding and enhance the models’ ability to capture the full range of implosion phenomena.

“Simulations of this type are computationally very costly,” the researchers noted. “Fortunately, continuing developments in computing power and modeling technique have recently made these simulations possible.”

Single-effect simulations of a 2017 NIF shot show the relative importance of different implosion degradation mechanisms. The 1-D, unperturbed neutron yield in this implosion model (left) is 5.6× 1016. The largest degradation sources are asymmetries in the 3-D x-ray flux impacting the target capsule and the tube used to fill the capsule with deuterium-tritium fuel, resulting in yield degradations of 3.1 and 2.2 relative to 1-D, respectively. The high-mode fuel-ablator mix results in only a 1.6 yield degradation relative to 1-D. When all effects are combined the yield degradation relative to 1-D is 4.2 and compares favorably with the experimental total degradation of 3.9. The presence of multiple large perturbation sources means that more than one of these perturbations must be significantly mitigated in order to substantially improve performance.

Lead author Dan Clark, who heads NIF’s Capsule Modeling Working Group within the Laboratory’s Inertial Confinement Fusion (ICF) Program, said the researchers’ goal is “to try to make the most comprehensive implosion model we can with the computers that we have, try to fold in everything that we know is happening into one big picture, and see what it looks like when it’s all going on at once in a real experiment.

“If you want any realistic model of the actual experiment you have to bite the bullet and recognize that it’s a big simulation to run,” Clark said. “It takes time and resources. We’re limited in what we can compute, but the computers get faster, not slower, and as you add more physics you get more fidelity. We’ll have to see where that ultimately takes us. But it’s obvious that if your experiment is 3-D, then simulation assessments must include 3-D too.”

Clark won the 2018 Ronald C. Davidson Award for Plasma Physics for contributing some of the most highly cited and downloaded articles in Physics of Plasmas during the past five years. He is a longtime advocate of high-resolution, 3-D radiation hydrodynamics modeling to better understand the failure modes in ICF implosion experiments and to develop future designs aimed at improved performance.

Work by Clark’s group has been essential for understanding the performance of implosions from early NIF experiments to the recent High Foot and High-Density Carbon (diamond) Ablator campaigns.

“We’ve been doing 3-D (modeling) for a while now, and we’re getting better and better with more and more fidelity,” Clark said. (Early models fell short of matching NIF’s experimental results partly because the experiments are so complex and difficult to model.) “We’re always aiming for higher resolution and higher physics fidelity, which means a bigger simulation to resolve more fine-scale physics like radiation transport and the NLTE (nonlocal thermodynamic equilibrium) effects of the mix (of capsule material) into the hot spot. We’ve been struggling with that for years and making progress, but it could always be better.” 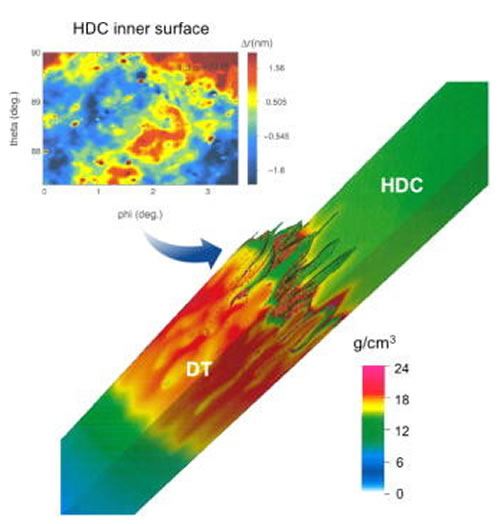 A high-resolution 3-D simulation of a 2017 NIF shot at the time of peak implosion velocity showing the effects of capsule surface roughness. Significant mixing between the high-density carbon (HDC) ablator, or target capsule, and deuterium-tritium (DT) fuel has occurred by this time, including long fingers of hot HDC that have penetrated halfway through the DT. (Click to Enlarge)

The researchers cited several “now well-known” factors that contribute to degraded implosion performance: the tiny tube used to fill the capsule with deuterium-tritium fuel, the ultrathin “tents” that support the capsule inside the hohlraum, asymmetries in the hohlraum x-ray flux that drives the implosion, and the mixing of capsule material with the fuel.

In addition, researchers are paying increased attention to very small-scale defects on the surface of the capsule, known as pits or voids, as well as “microstructure” in the capsule layers that can seed further perturbation growth. “Both of those things can couple together at the very small scale and be a degradation source,” Clark said.

X-ray imaging of some capsule implosions have revealed bright spots in the hot spot—the researchers call them “meteors”—apparently caused by capsule material being injected deep into the hot spot, possibly because of the surface defects. The meteors are a source of radiative cooling, Clark said.

“If you have high-Z (high atomic number) ablator material in your hot spot, it radiates very vigorously at a couple of kilovolts temperature, and that’s a channel for energy to be lost from the hot spot.” (Recent findings by LLNL researchers indicate a need to further increase energy concentration and hot-spot temperature in NIF implosions in order to obtain ignition; see “Approaching a burning plasma on the NIF,” by Omar Hurricane and colleagues, Physics of Plasmas, May 9, 2019).

“No single effect explains the observed (implosion) performance,” the researchers noted. “All of these perturbations must be reasonably accounted for in any reliable simulation model, especially since their relative importance could shift as an implosion is extrapolated to the threshold of ignition.”

NIF scientists are pursuing a two-track strategy in their efforts to reach ignition, both of which can be tested in 3-D simulations. For the first time ever in a laboratory setting, researchers have seen the initial signs of “alpha heating”—when the alpha particles (helium nuclei) generated by fusion reactions in the target’s central hot spot deposit their energy in the surrounding cold fuel, stimulating additional fusion reactions. This process, if better contained, would lead to a self-sustaining “burning plasma” and eventually, as other issues are resolved, to fusion ignition.

The first ignition track includes improvements in target fabrication, increased coupling of laser energy to the hohlraum and x-ray energy to the capsule, and better drive symmetry. These are thought to enable faster, more stable, more symmetric, and/or higher-compression implosions to produce higher energy yields with the same laser energy.

“The largest source of uncertainty in the current model, as in all predecessor models, is almost certainly the x-ray flux on the capsule,” possibly caused by imbalances in the laser energy delivered to the hohlraum, the researchers said. Determining and modeling the x-ray flux is especially challenging because it can’t be measured directly and must be inferred from other data such as implosion velocity, timing, and trajectory.

In the second track, target dimensions and drive energies are hydrodynamically scaled up to higher drive energies in the models in anticipation of a larger, upgraded laser system, while the perturbations that degrade performance are assumed to be fixed. This also leads to higher yields.

“For the implosion performance demonstrated to date, this brute force approach to ignition obviously reaches beyond NIF’s current capabilities,” the researchers said, “but is always a possibility for some future facility. Some combination of the two routes that includes modest enhancements to NIF’s power and energy is of course also possible.” 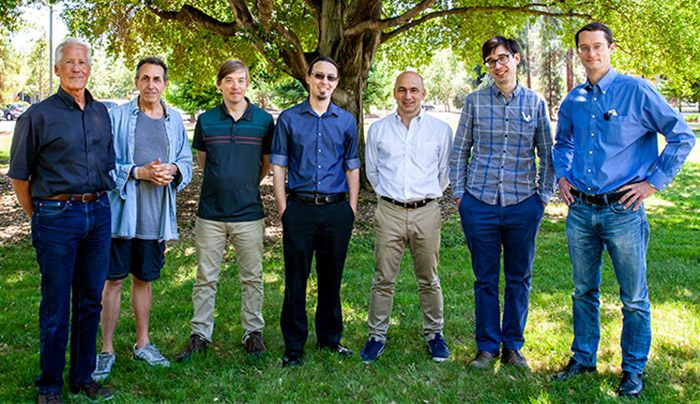 Directly accounting for the effects of the tent, fill tube, and fuel-ablator mix in a complete model of the implosion would require a ten-fold increase in modeling resolution, or about a 10,000-fold increase in total compute requirements, they said.

“Such resolutions are well beyond today’s capabilities, but as exascale (one quintillion calculations per second) computing becomes available, this ultrahigh resolution in 3-D will eventually become feasible and would enhance the predictive capability of the current model.” (On Aug. 13 the Department of Energy, the National Nuclear Security Administration (NNSA) and LLNL announced the signing of contracts with Cray Inc. to build NNSA’s first exascale supercomputer, “El Capitan”).

“Given the uncertainties inherent in any extrapolation, particularly for a process as nonlinear as ignition, there will be no definitive answer on the requirements for ignition until it is actually demonstrated experimentally,” the researchers concluded. “However, with continuing improvements in modeling technique and a growing experience base from NIF, the requirements for ignition are becoming clearer.”