The NIF User Office: Where the World Meets the Laser

“Speaking science” is second nature to the scores of researchers across Lawrence Livermore National Laboratory and thousands of their colleagues in academia and industry around the world. But “speaking NIF” is a skill only a few hundred LLNL experts possess.

The NIF User Office exists to translate between these two languages and to cultivate innovations that benefit the scientific community as well as Livermore’s mission of supporting stockpile stewardship. 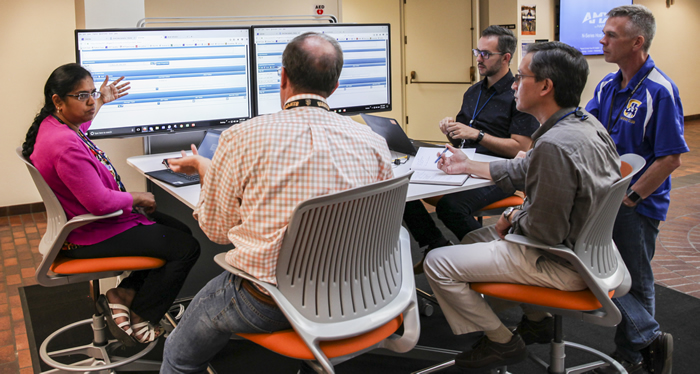 Because NIF is a one-of-a-kind facility, it offers opportunities for research that were impossible until recently and are still unavailable anywhere else. And while its primary mission has always been to further stockpile stewardship for national security, NIF’s unparalleled capabilities also make it incredibly useful for scientists worldwide.

Kevin Fournier, the User Office’s director, describes it like this: “It’s where the world meets the NIF. The User Office handles all of the integration between the concepts that scientists propose and implementation at the facility.” And on more than one occasion, research proposed by scientists has helped keep the nation’s nuclear stockpile safer and more reliable.

Fournier has been on the job for three and a half years. In that time he has led a committed team of scientists, engineers, and support staff to simplify the process of doing Discovery Science research on NIF for external users.

The process begins when a scientist from, for example, MIT or Stanford, or the University of Oxford in the UK, has a research question that he or she believes only NIF can answer. A panel of experts from the high energy density (HED) science community called the Technical Review Committee, or TRC, evaluates the proposal for scientific merit.

In the past, evaluations were difficult to coordinate thanks to the variety and worldwide distribution of proposers and panel members. But using the Salesforce™ platform, Fournier, his team, and the NIF Data Systems group have been able to centralize the submission and evaluation process, making everything simpler for both the scientists and the panel. 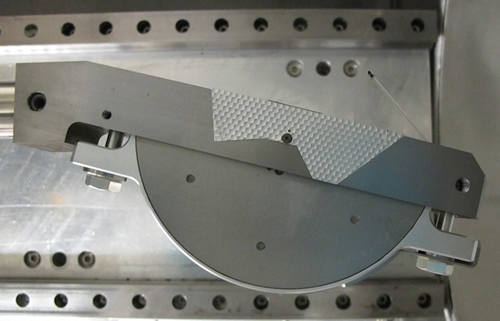 A target diffraction in-situ (TARDIS) target containing a material sample, an x-ray source target on a stalk, and the image plates to capture the x-ray diffraction cones inside the hemispherical cartridge. TARDIS Discovery Science experiments are designed to shed light on the phase changes, or structural transitions between states of matter, that occur in materials under pressures and temperatures comparable to those believed to exist in the cores of “super-Earth” extrasolar planets. As an element of NIF’s high energy density science program, TARDIS also provides important information on the characteristics of materials used in nuclear weapons as they age or are subjected to the immense pressures and temperatures of a thermonuclear explosion.

Sometimes, Fournier says, the TRC decides the work needs additional development or can be done at a smaller laser facility elsewhere. Discovery Science comprises only 8 percent of the total shots NIF takes in a year.

“NIF is such a valuable resource nationally and for the high energy density community, that it is important feedback to give,” Fournier says. “We can’t just take shots willy-nilly for a small impact. Every shot at NIF is important.”

But when the work is NIF-worthy, a wide cross-section of the facility’s staff springs into action to make sure it’s a correct fit for the laser system and its increasingly complex array of targets and diagnostic instruments. The proposal data evaluated by the TRC are distilled into a set of project parameters for a new tool called the Shot Request Tool (SRT).

With the SRT’s basic parameters and requirements, principle scheduler Bob Burr and his team begin to work the project into the master schedule alongside NIF’s core stockpile stewardship and calibration efforts (see “Behind the Science: Tackling the ‘Tetris’ of NIF Scheduling”). The SRT produces something like a piece of a jigsaw puzzle that can be scheduled alongside other shots with similar parameters.

Once the puzzle is put together and shots are scheduled, the scientists who proposed the experiments begin defining the actual facility parameters necessary to fire the laser-to-target shots using the Shot Setup Tool (SST). It replaces the decade-old Campaign Management Tool, used since NIF was first commissioned (see “Streamlining the Lifecycle of NIF Experiments”).

The SST was developed by the User Office and Allan Casey’s Data Systems group, a team that is a critical resource at NIF that turns the User Office’s vision into resources for NIF’s users. Based in a Web browser, the SST represents a major leap forward for external users: information from Salesforce helps to set up the entire process, which the scientists can then supplement with more detail about the parameters they expect their experiment will require.

With that information, project engineer Rich Zacharias helps to coordinate with the specialists around NIF like User Office Senior Scientist Dan Kalantar, who looks at the project’s proposed target to determine whether it can be accurately positioned in NIF’s Target Chamber, for example. Gayatri Gururangan’s team decides if the proposal poses any risk of damage to the laser or Target Chamber components. Thanks to the SST, the same information is shared throughout NIF’s multiple expert groups to speed up the review process and eliminate redundancy.

“(Zacharias) is our ‘boots on the ground,’” Fournier says. “He makes sure that these types of discussions and issues are addressed far in advance, so there’s smooth execution and not a wild scramble at the end.”

But a shot on NIF is much more than setting up the laser correctly. The target must also conform to the scientists’ plans as well as NIF’s requirements. The SST therefore also feeds information into another one of the User Office’s new tools: the Target Request Tool (TRT). Abbas Nikroo and NIF’s Target Fabrication team use the TRT to take the scientists’ plans for the target and, through the Target Fabrication team’s processes and special skills, make it real. Once the shot is completed, the resultant data is archived and packaged on a Web interface so the researchers can view a wide variety of diagnostic information.

Fournier knows how complicated the shot process is because he’s seen his share of shots, having spent six years as a major NIF user himself. Coordinating shots for National Security Applications projects for the Department of Defense showed him all of the capabilities of NIF, along with its procedural drawbacks. On becoming director of the User Office in 2015, he set out to simplify and streamline the process and make NIF’s science more accessible to more researchers.

“As a user, all you care about is getting through the shot day and then hurrying up toward the next crisis,” Fournier says. “Taking a step back and looking at the process as a whole? All the users would be way too busy to look at that.”

Over for the past two years, Fournier has helped coordinate the effort with the User Office’s Mat Snyder that led not only to the new SST, SRT, and TRT tools, but also to a massive rewrite of critical training documents. Instead of a “terribly technical and totally overdense” training document, users can now access a new manual online at the NIF & Photon Science Website. Training for responsible individuals (RIs), ultimately responsible for the success of a shot, has been structured and placed on Livermore’s internal Lab-wide training platform.

The results are convincing. Basic science research on the core density of supermassive planets has helped Stockpile Stewardship Program (SSP) scientists develop techniques to examine how weapons materials behave at immense pressures. Scientists looking for proton behavior in magnetic fields have provided useful data for the SSP program as well. The User Office’s work has as many benefits as NIF itself.

“It’s a unique resource,” Fournier says. “There really are scientific things that can be done at NIF that cannot be done anywhere else in the world. That’s something we filter for. The fact that we can make that available to the world is a wonderful thing to do.”

The NIF laser system has set a new record, firing 2.15 megajoules (MJ) of energy to its Target Chamber—a 15 percent improvement over NIF’s design specification of 1.8 MJ, and more than 10 percent higher than the previous 1.9 MJ energy record set in March 2012. 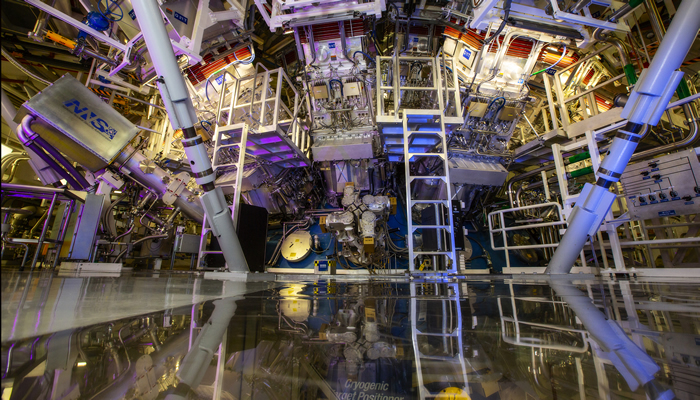 Temperatures of 100 million degrees and pressures extreme enough to compress the target to densities up to 100 times that of lead are created in the NIF Target Chamber. Credit: Jason Laurea

“NIF’s users are always asking to use more energy in their experiments, because higher energies enhance the science NIF can deliver in support of the stewardship program,” said NIF Director Mark Herrmann. “These results mark a major step toward increasing NIF’s energy and power capability. This demonstration serves as the first step on a path that could allow NIF to operate at substantially higher energies than ever envisioned during NIF’s design.”

The purpose of this experiment was to demonstrate the highest energy NIF can safely deliver with its current optics and laser configuration. Increasing NIF’s energy limit will expand the parameter space for stewardship experiments and provide a significant boost to the pursuit of ignition—a key element of NNSA’s Stockpile Stewardship Program.

This work builds on a successful demo laser campaign performed on NIF last year, which utilized just four of NIF’s beams to study the performance limits of the NIF laser. Recently published in Nuclear Fusion, the experimental campaign was designed to assess laser performance limits and operational costs against predictive models. The campaign culminated in the delivery of the highest energies to date and informed the effort to demonstrate 2.1 MJ on the entire 192-beam laser system.

“The successful 2.1 MJ demonstration is the result of a sustained science and technology investment in NIF and fundamental understanding of optical damage, much of which has been supported by Laboratory Directed Research & Development (LDRD) and other institutional programs,” said NIF & Photon Science Principal Associate Director Jeff Wisoff.

The NIF laser uses tens of thousands of large precision optical components, including lenses, laser glass slabs, mirrors and frequency conversion crystals to amplify and guide its 192 laser beams to a small target in the 10-meter Target Chamber. Continuous research and development efforts have put these optics at the cutting edge of material science and technology and play a crucial role in raising the laser’s energy and power thresholds. Recent breakthroughs have reduced the level of damage initiation and growth in the optics and led to a reduced cost to mitigate existing damage spots.

Based on this successful demonstration, NIF is working with LLNL’s ignition program to execute the first ignition experiments that utilize this enhanced energy capability later this summer. Looking ahead, this is the first major step toward extending NIF’s energy and power output through technology development and laser research to extend the NIF mission space and its contributions to the SSP.