Behind the Science: Tackling the ‘Tetris’ of NIF Scheduling 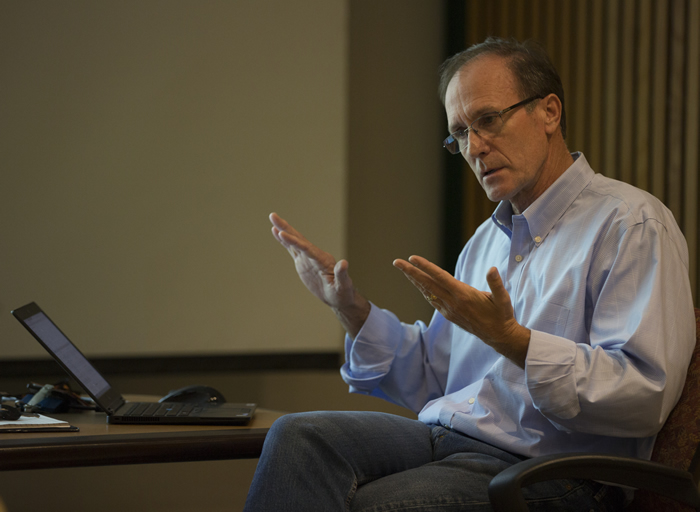 Every year, thousands of scientists and engineers from around the globe vie for experimental time at NIF. It’s Bob Burr’s job to find a seat at the experimental table for as many of them as possible.

As the principal NIF scheduler, it’s Burr’s duty to calendar time for hundreds of experiments vital to U.S. national security and advancing our understanding of the universe. The problem is, thousands of scientists are seeking NIF access, and time on the laser is limited.

“I’ve gotten over trying to achieve perfection in scheduling; now I go for executability,” Burr explained. “This is science; we’re not building cars. The question I need to address in achieving a viable schedule is: What will work in real life for NIF?”

The good news for scientists is that since taking over scheduling duties in 2014, Burr has been able to more than double the number of experimental time slots available to users. Thanks to many efficiency improvements and the hard work of the NIF operations, target fabrication, and diagnostics teams, the number of target experiments has climbed from less than one per day in 2014 to nearly two per day currently, which led to more than 400 experiments in each of Fiscal Years 2016 and 2017.

Burr’s challenge is achieving the balance between supply and demand in laser science. His job requires him to schedule the laser a year in advance, while factoring in the unpredictability of experimental science.

“It’s a constantly moving target,” said Abbas Nikroo, NIF Target Fabrication Program manager. Nikroo said his group depends on the intricate advance planning of the NIF schedule in six-month increments that Burr provides, but also appreciates the flexibility of allowing adjustability for weekly or even daily changes in the experimental campaigns.

Assigning NIF experimental time is not as straightforward as simply inputting time slots into a spreadsheet. Over the last two years, requests for time on the facility have increased by more than 50 percent. Adding to the time pressures of experimental scheduling is the increasing complexity of NIF experiments.

“We’ve added significantly to the number of diagnostics and positioners we have now and special equipment that requires time to install and take down with each experiment; I have something like 220 different requests from scientists saying, ‘I want this’es,’” Burr said. “To keep the schedule sane, it’s all about grouping experiments so they play together well.” 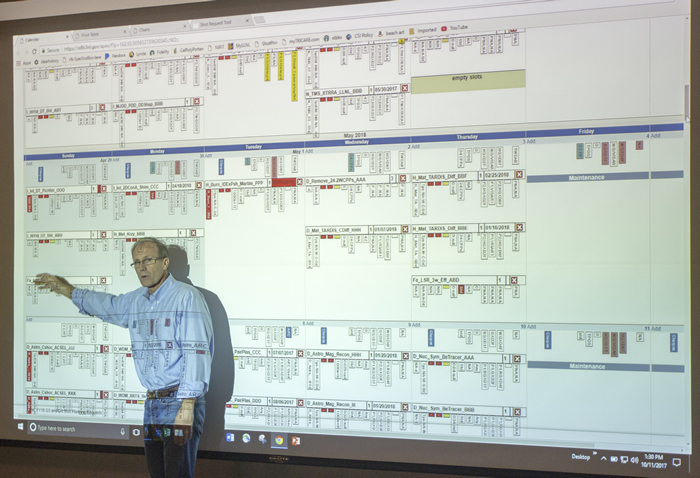 To create his NIF master schedules, Burr prefers working on a big canvas like a muralist, using a 20-foot presentation screen to better see and juggle the hundreds of intricate elements.

“What I do is play Tetris with the NIF schedule,” he said, comparing his master scheduling matrix to the classic 1980s-era video game.

He believes in keeping firm control of the schedule to handle the ever-shifting needs of researchers, and to head off what Burr calls their tendency to try to bend the rules. “The scientists are always saying, ‘No, I need to do what I want!’ and I always say to them very calmly, ‘No, I can’t have you over here, because our facility costs $3 billion, you can’t be moving mirrors around.’ It’s all the same principle. They can’t do whatever they want.”

The NIF User Office performs an important function with the scheduling process, said NIF Operations Manager Bruno Van Wonterghem, by ensuring NIF shot time is optimally used to meet the users’ goals within their allocation. An external advisory committee helps ensure consistency with available laser time and diagnostics, materials and target capabilities, and the budget for optics and target use.

“This is an incredibly complicated process, with a large number of constraints and complications,” Van Wonterghem said. “It’s like solving a 13-dimensional Rubik’s Cube.”

Burr is a graduate of the U.S. Naval Academy, with a degree in systems engineering, and experience as a division officer and department head on two nuclear submarines: the USS Aspro and the USS New York City. In addition to serving in submarine operations and support roles during the Cold War, he led inspection teams charged with verifying START I (Strategic Arms Reduction Treaty) compliance during the weapons draw-down drama between the United States and the former Soviet Union in the early 1990s.

After retiring from the Navy, Burr worked in the private sector in multiple engineering and supply-chain firms before joining NIF 10 years ago. His extensive experience in both civilian and military leadership prepared him for the role, he believes: “I call it my background in command and control.”

User Office Director Kevin Fournier, who worked with him as a colleague when Burr was a shot director and is now his supervisor, said, “It’s been a pleasure to work with Bob, and I very much enjoy his professionalism and can-do attitude. Bob also has a great, dry sense of humor which makes every day entertaining as well as professionally satisfying.”

For Burr, the secret to engineering a schedule is maintaining flexibility—what he calls the philosophy of moving targets. He’s a man who posts what few things hang on his office wall with a few push pins, never anything as permanent as nails or wood screws. His job may require him to make firm schedules every six months, and for the full fiscal year. But he also deals with daily and weekly schedule issues at NIF because, as in real life, the unexpected happens.

He tries to approach his personal life with the same unflappability. He learned golf because there was plenty of sun and turf while he was stationed in Hawaii. He learned to really love the game when his teenage children Ryan and Kristen began playing both golf and soccer competitively. With his wife Nancy, a Bay Area native and longtime San Francisco Giants fan, he’s become a passionate enough fan himself to adopt the Giants as his hometown team.

To Burr, the son of a former serviceman, life outside NIF comes down to one word: Family.

“I made the decision early on, when I left the service, that I wanted a life where I was there for my family. And that’s the life I have,” he said.

At NIF, he works to maintain the balance between supply and demand and between planning and flexibility. “How do I schedule the facility in a way that allows us a way to be predictive, to be able to plan, to address supply-chain management?” Burr asks. “How can you plan a year ahead? How can you not? That’s the challenge that keeps me going all the time.”