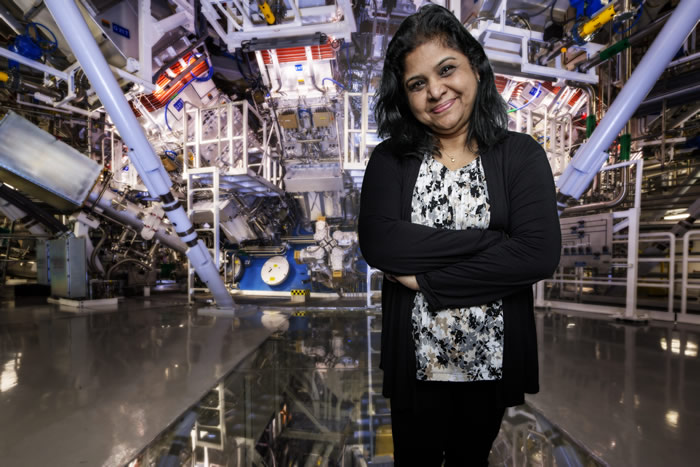 Gayatri Gururangan is a system engineer overseeing TaLIS (Target and Laser Interaction Sphere)—an expert group tasked with assessing potential risks and damage to NIF that might arise from a proposed shot.

Gururangan began her career at the Lab in 2002 as a mathematician supporting the construction of NIF. After applying her statistical and analytical prowess in outside industry for 10 years, she admits with a smile that the shift to NIF was a big adjustment for her.

“During my job interview, we discussed NIF and its importance,” says Gururangan. “I really enjoyed the conversation. I’ll be honest, though. It didn’t make a lot of sense at first. All this talk of 192 beams—I’m thinking ‘beams’ made it sound like a big warehouse. But it really stuck in my head as I learned more. So I jumped into my first project, which was RAM (Reliability, Availability, Maintainability).”

She came aboard during the assembly and installation of the line replaceable units (LRUs), which are modular components for the beamlines designed to be easily interchangeable. With 6,206 LRUs to build and install, the coordination between overlapping assembly and test stations proved to be logistically complicated. Unforeseen holdups could quickly introduce domino effects threatening milestones.

“How do you make it so that the critical paths are held to a minimum number while maximizing effort? You don’t want multiple teams on tasks that go fast. You want them on tasks that go slower,” Gururangan explains.

“It is called discrete event simulation. What are the steps of the assembly process? How long does it take? How many people are needed? How early do you need to procure and start in order keep up with the installation schedule? I modeled that. Once in place, things crystallized for everybody.”

After NIF became operational, Gururangan helped RAM reach a point where predictive maintenance was possible by identifying certain deteriorating performance metrics. Instead of a part completely failing while in operation, it could be replaced when signals showed the likelihood of looming failure. Replacement could then occur opportunistically, such as during scheduled downtime between shots.

One of three members on the team that developed the first NIF shot clock, Gururangan recalls taking turns monitoring shots day and night for about a month to refine its functionality.

“The shot clock was seen as a way to capture unplanned and critical path activities during shots and a tool to display the countdown and progress to people who were not in the Control Room,” she notes. “It also gave better metrics of shot-to-shot durations for different types of shots. This all helped improve efficiency.”

Gururangan joined TaLIS in 2012. After a NIF user proposes a shot, TaLIS investigates. Under adverse conditions, debris and shrapnel could occur after the laser hits the target. If not fully vaporized, the target could produce high-velocity fragments that impact equipment inside the Target Chamber, including optics and diagnostics. 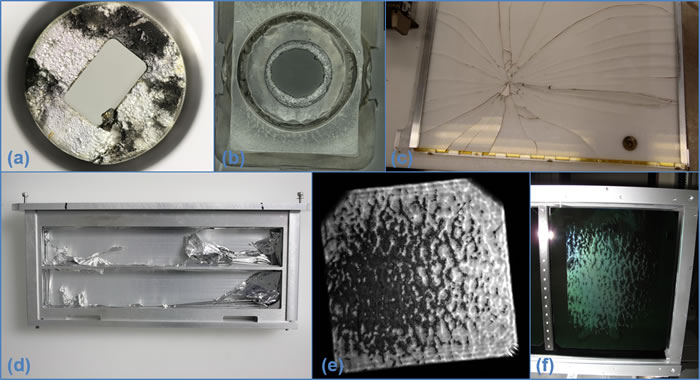 Examples of what can happen when the extreme energy of the NIF lasers hits a target and causes damage by: (a) debris and shrapnel, (b) debris, (c) shrapnel, (d) mostly x-ray load and possibly shrapnel, (e) backscatter, and (f) blow-by.

An x-ray load could ablate material and damage nearby hardware. In addition, anything inside the Target Chamber must be able to survive vibrations that result from the shockwave spreading out from the target.

Backscatter and blow-by could occur from unintentional reflection off the target’s plasma, which could send laser light back up the beampath onto vulnerable optics. Flat target surfaces also could reflect laser light up the beampath and damage the front end of the laser.

“To mitigate backscatter, dropping laser energy helps,” Gururangan explains. “But when you drop the energy, you are going to make debris worse. Higher energy causes greater vaporization of the target. There are always tradeoffs to balance.”

Diagnostic and positioner hardware are close to the target. If the protective shroud around a target opens, will it hit any other hardware nearby? Are any diagnostics losing their direct line of sight to the target? When inserting and retracting targets and diagnostics from the Target Chamber, is there a possibility of contact with anything nearby? These are all machine safety issues that TaLIS also assesses.

“If something breaks during operation, then it could cause unexpected downtime,” Gururangan cautions. “Obviously, there’s the expense of repair efforts but also of spares. Many parts are one-offs or have long lead times. If too many break, NIF could be down for hours or days.

“TaLIS is here to support all of the NIF users. We facilitate their shots, but our ultimate customer is the facility. Protecting NIF is my primary goal.”

Attention to safeguarding and rendering assistance also have been foundational to Gururangan’s life outside the Laboratory. After growing up in New Delhi, India, she moved to the Bay Area at the age of 25. Even though the transition was like a reset for her, she rapidly became part of the community.

“I’m a singer,” she says. “It comes naturally to me because I grew up singing Bollywood songs. I used to do professional stage shows with expert musicians for different charities in the Bay Area. For example, if there was a natural disaster like a hurricane, then we’d help raise money.”

Gururangan performed almost every weekend for more than four years. But the desire to help others never faded after she gave up the stage.

“My one big data point happened while at dinner with my family,” she says. After talking about school with Gururangan’s children, the waitress mentioned that she was having a lot of trouble with statistics, which she needed for her diploma.

“I enjoy teaching math,” says Gururangan. “Both of my kids said at the same time, ‘She can teach you.’ I told her that I was happy to teach her. Afterward, I helped her daughter pass math, too.” Though she didn’t charge, she did ask for commitment to the process. Since then, she has helped many others succeed in math. “These things give me so much joy,” she says.

You probably won’t find Gururangan dancing and singing down the hallways of NIF, as is common in Bollywood movies. But there’s a good statistical chance that you might catch her humming a tune from a soundtrack as she calculates ways to keep NIF safe.