In the National Ignition Facility (NIF), the world’s highest-energy laser system, a complex series of glass optics, including amplifiers, mirrors, wavelength converters, and focusing lenses, strengthens and guides the laser light to its destination. Over the years researchers have developed and refined these optics so they can withstand the intense energies generated by NIF’s powerful laser beams.

Not even the hardiest solid-state optics, however, can cope with the energies that will be produced by the next generation of ultra-intense, high-repetition-rate lasers now being developed at LLNL and elsewhere around the world. Current state-of-the-art 10-petawatt (quadrillion-watt) lasers may soon be eclipsed by 100-petawatt and even exawatt lasers capable of generating 1,000 petawatts of peak power—more than five times the power the Earth receives from sunlight. 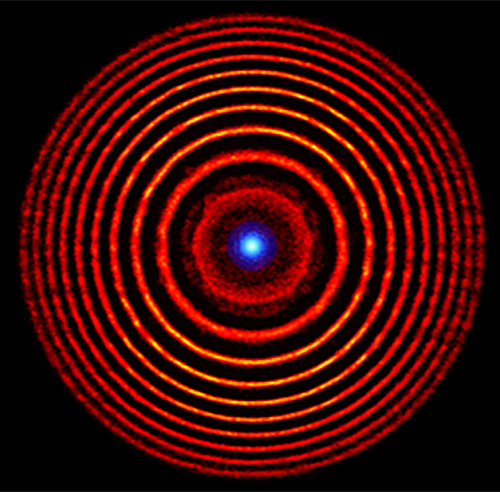 To help enable these ultrafast, ultra-high-power lasers, Livermore researchers and their colleagues are exploring ways to build laser optics from plasma—a charged mixture of ions and free electrons—to overcome the limits on maximum fluence (energy density) imposed by conventional solid optics. A plasma optic allows a large amount of energy to be directed into a small space and time in a well-collimated (focused) beam.

Because plasma has a much higher energy density than glass, it can withstand much higher optical densities. Plasma-based replacements for a variety of standard optical components would allow the manipulation of light at extreme fluences, opening the door to higher laser intensities and energies.

One example of this is described in a featured Physical Review Letters paper published online on Feb. 8. LLNL postdoc Matthew Edwards and colleagues present an approach to building a robust holographic plasma lens “capable of focusing or collimating a probe laser at intensities several orders of magnitude higher than the limits of a nonionized (solid) optic.”

“Glass focusing optics for powerful lasers must be large to avoid damage,” Edwards said. “The laser energy is spread out to keep local intensity low. Plasma is far more resistant to light damage than any solid material, and optics built from plasma can therefore be a thousand to a million times smaller than those built from glass.” 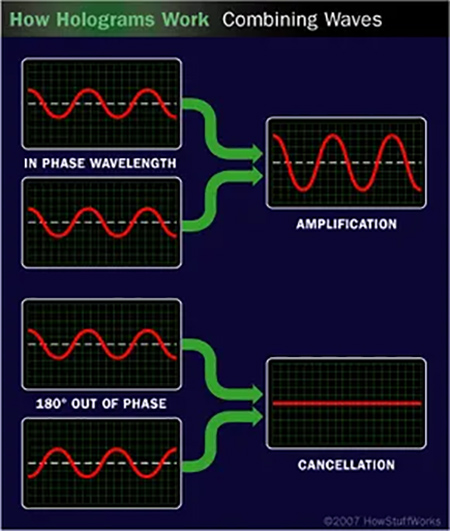 The Laboratory’s work on plasma optics is closely related to the long-standing efforts of researchers to control cross-beam energy transfer (CBET)—the exchange of energy between overlapping laser beams as they enter the laser entrance holes of a NIF hohlraum (see “How NIF Targets Work”). CBET creates a grating, or diffractive optic, in the hohlraum plasma that can be manipulated by wavelength tuning to direct the incoming laser light to where it’s needed to create a symmetrical implosion.

“Our new approach to using a plasma for focusing is based on diffraction—like a hologram or a zone plate—rather than refraction like a traditional lens design,” Edwards said. “Diffraction makes the plasma optic insensitive to imperfections in plasma density, which is important because it is in general difficult to create a plasma with optically precise properties.”

“The generality of holography means that holographic plasma optics can almost arbitrarily manipulate intense beams,” the researchers said in the paper. “These mechanisms are not limited to the creation of simple lenses.”

To create a holographic plasma lens, two co-propagating pump beams are fired into a gas jet. The interference pattern imprints a three-dimensional refractive index structure in the resulting plasma, inducing density variations that act as a diffractive lens capable of focusing a multi-petawatt-scale laser beam without being damaged.

The researchers tested the concept through computer simulations of two plasma mechanisms: spatially varying ionization, in which variations in laser intensity create static regions of ionized and non-ionized gas; and ion-density fluctuations that occur in the plasma as electrons and ions are forced from areas of high laser intensity to areas of lower intensity.

Because plasma optics are transient and generated from a gas, these lenses would be particularly well suited to high-repetition-rate laser systems, such as the LLNL-developed L3-HAPLS laser in the Czech Republic as well as potential inertial fusion energy systems.

Schematic of a holographic plasma lens. Left: Two pump lasers overlap at D in a gas jet, arranged so that their interference pattern is a sinusoidal zone plate consisting of concentric alternating regions of opaque or phase-shifting material, spaced so that transmitted light interferes constructively at the desired focal point. Center: At a delayed time, a probe laser passes through the resulting structure and is diffracted into one or more diffraction orders. Right: The intensity profile of the overlapped pumps and the resultant index modulation.

“We have shown that plasma nonlinearities can be used to create efficient high-damage-threshold diffractive plasma lenses,” the researchers concluded. They said the simulations suggest that the intensity damage threshold of the lenses ranges from fluences of more than 1014 (100 trillion) watts per square centimeter for the ionization mechanism to more than 1017 (100 quadrillion) W/cm2 for the ion-density mechanism.

“The required plasma is similar to those that have been achieved experimentally for plasma gratings,” Edwards said, “and a lens of this design may be feasible in the near future.”

“A Plasma Lens for the World’s Most Powerful Lasers,” Physics, February 8, 2022