Scientists have conducted the first in-situ diffraction experiments measuring deformation twinning at the lattice level during shock compression. The results were reported in a Nature paper published online on Oct. 25 by a team of researchers from LLNL and collaborators from the University of Oxford, Los Alamos National Laboratory, the University of York, and the SLAC National Accelerator Laboratory.

Shock compression is a challenging area of study, combining extreme conditions, such as high pressures and temperatures, with ultrafast time-scales. To simplify the problem, scientists often assume that solid materials behave like a fluid—flowing and changing their shape (plasticity) without resistance. Yet as a solid, most materials also retain a lattice structure. As a material flows, changing shape, the lattice somehow must change as well while still maintaining its regular lattice pattern. The study of plasticity at a most fundamental level then rests on understanding how the lattice changes while a material is deforming. 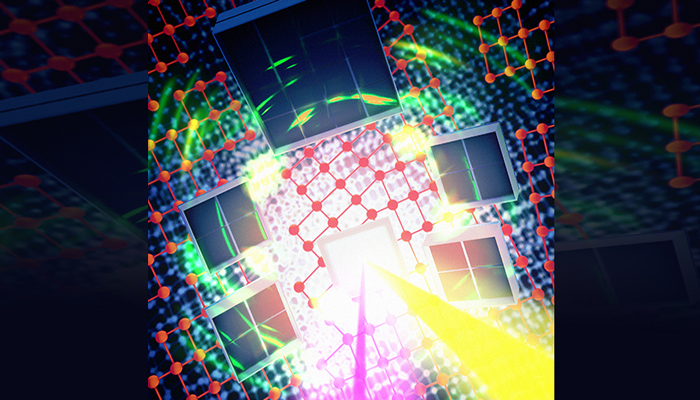 This image depicts the experimental setup; a tantalum sample is shock-loaded by a laser and probed by an x-ray beam. The diffraction patterns, collected by an array of detectors, show the material undergoes twinning. The background illustration shows a lattice structure that has created twins. Credit: Ryan Chen

Dislocation-slip (where lattice dislocations are generated and move) and twinning (where sub-grains form with a mirror-image lattice) are the basic mechanisms of plastic deformation. Despite their fundamental importance to plasticity, diagnosing the active mechanism in situ (during the shock) has been elusive. Previous research has studied the material after the fact (in “recovery”), which introduces additional complicating factors and has led to conflicting results.

“In-situ diffraction experiments have been around for a few decades,” said LLNL physicist Chris Wehrenberg, lead author on the paper, “but have gained prominence only recently as high-powered lasers and x-ray free electron lasers have made the measurements more widely available, more sensitive, and able to reach more extreme conditions. Our work highlights an untapped area of study, the distribution of signal within diffraction rings, which can yield important information.”

The team’s experiments were conducted at the new Matter in Extreme Conditions end station at SLAC’s Linac Coherent Light Source, which represents the leading edge in a large, worldwide investment in facilities that can pair in-situ diffraction with high-pressure and high-strain rate techniques.

“In these experiments,” Wehrenberg said, “you launch a shock wave with a laser, where a jet of laser-heated plasma creates an opposing pressure in your sample, and probe the state of your sample with an x-ray beam. The x rays will scatter off the sample at specific angles, forming diffraction rings, and the scattering angle provides information on the structure of the material.”

Despite the growing popularity of in-situ diffraction experiments, most focus on the scattering angle and don’t address the distribution of signal within a diffraction ring. While this approach may reveal when a material changes phases, it will not reveal how a material behaves outside of a phase transition.

By analyzing the changes of signal distribution within the lines, the team was able to detect changes in the lattice orientation, or texture, and show whether a material was undergoing twinning or slip. In addition, the team could not only demonstrate whether the sample—tantalum, a high-density metal—twins or slips when shock compressed, but they also were able to demonstrate this for most of the entire range of shock pressures.

“LLNL is deeply engaged in material modeling as part of the science-based stockpile stewardship mission and has programmatic efforts to model tantalum at the molecular level, as well as plasticity modeling,” Wehrenberg said. “These results are directly applicable to both of those efforts, providing data that the models can be directly compared to for benchmarking or validation. In the future, we plan to coordinate these experimental efforts with related experiments on LLNL’s National Ignition Facility that study plasticity at even higher pressures.”

While the techniques for analyzing x-ray diffraction data for changes to the texture and microstructure of a material have been practiced in quasi-static experiments, they are new to the field of shock experiments. This combination of techniques is relevant to many other fields.

For instance, planar deformation features in quartz caused by twinning and microfracture are a common indication of meteor impact sites, and these features also can affect the magnetization of other geological materials. Similarly, the twinning plays a crucial role in the self-sharpening behavior of ballistic penetrators and has been linked with increased ductility in high-performance ceramics for armor applications. Understanding high-rate plasticity is critical for hardening space hardware from hypervelocity dust impacts and even has implications for the formation of interstellar dust clouds.

Since its introduction in the 1977 film “Star Wars,” the Death Star has remained one of science fiction’s most iconic figures. The image of Alderaan’s destruction at the hands of the Death Star’s superlaser is burned into the memory of millions of fans.

In the past, scientists and laser experts have maintained that this superbeam could never work due to the properties of lasers; theory says that rather than converging and combining their energy, the beams would just pass through one another.

That was true enough then. But now a team of LLNL researchers has added a plasma—a charged mixture of ions and free electrons—to the concept and successfully combined several separate NIF lasers into a “superbeam.” Their work, recently published in Nature Physics, is a next step in the Laboratory’s 50-year history of leadership in laser research and development.

While this superbeam isn’t quite as super as the one depicted in science fiction, it stands as an important achievement—for the first time, nine of NIF’s 192 laser beams were combined to produce a directed pulse of light with nearly four times the energy of any of the individual beams. Leveraging LLNL’s expertise in optics research and development, the team used a Livermore-designed plasma optic to combine the beams and produce this first demonstration of its kind.

In certain experimental configurations, targets can be driven only by a single beam. Each beam has a limit on the amount of energy it can deliver. By combining multiple beams into one, LLNL’s plasma beam combiner can break through that limit and push these experiments into new physics regimes. Beams with high energy and fluence are expected to advance a range of applications, including advanced x-ray sources and studies of physics at extreme intensities. 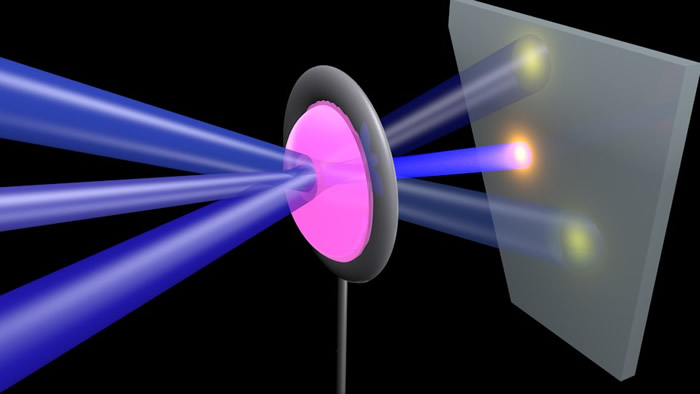 “In high-energy laser systems which use conventional solid optics, the maximum fluence (energy density) is limited by the damage of the (optics’) material,” said Robert Kirkwood, lead author on the paper and programmatic lead for the experimental campaign. “Because a plasma is inherently such a high energy density material, you don’t destroy it. It can handle extremely high optical intensities.”

“Beam combining has recently been done with solid-state lasers, but was limited by typical standard optics,“ added co-author Scott Wilks, one of the campaign’s designers. “Because of this plasma optic, we can put a huge amount of energy into a very small space and time—serious energy, in a well-collimated (focused) beam.”

Laser research and development is pushing into new regimes of power and energy, which are limited by conventional solid-state optics. Using a plasma optic, however, might appear counterintuitive.

“Plasma is generally bad for lasers—it is the bane of our existence,” said co-author Brent Blue, program manager for NIF National Security Applications. “The team has turned that on its head and is intentionally harnessing plasmas for a benefit.”

Plasma generally creates instabilities when combined with intense laser beams. By controlling an instability that causes the transfer of energy when beams cross, however, the researchers were able to combine the energy from multiple beams into a single powerful beam.

“We’ve known that plasma can deflect light and change the direction of energy flow, but it’s been difficult to do it in a very precise way,” Kirkwood said. “Here we’ve shown that we can control optical instabilities in plasma so that rather than randomly scattering energy, they put it where we want it and do so with good collimation and high intensity, producing a bright beam that can be delivered to another target. We can now control and predict what the plasma does, quite accurately.” 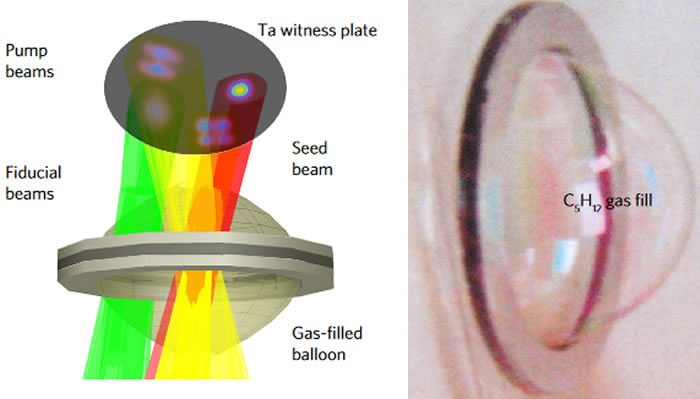 (Left) Illustration of the NIF beam-combiner target. The gas-filled balloon target (10 millimeters in major diameter) is used to create a uniform plasma to amplify a single seed beam (red) by combination of eight pumping beams (yellow) via seeded stimulated forward scatter. In addition to the two groups of pumps crossing the seed at 14.7° and 20.7°, the gas is ionized and heated with forty heater beams at larger angle (not shown). A tantalum witness plate is used to diagnose the red-shifted seed beam energy as it emerges from the plasma via the relative brightness of the x-ray spots created by it and by a fiducial (reference) set of beams (green). (Right) Photograph of the balloon target and the plasma conditions produced in it by all incident beams. The C5H12 (pentane) gas is contained at the desired density by a thin membrane balloon mounted on a washer.

The emerging beam has an energy of four kilojoules (over one nanosecond) that is more than triple that of any incident (pumping) beam, and a fluence that is more than double. Because the optic produced is plasma and is diffractive, it is inherently capable of generating higher fluences in a single beam than solid-state refractive or reflective optics.

Transitioning to a new optic material with a much higher damage threshold than anything used before opens the door to higher laser intensities and energies. Looking forward, the team plans to scale up the experiment with the hope of combining up to 20 beams into one.