LLNL researchers are using NIF’s unique capabilities to study the effects of high pressure and high strain rates on the material strength of tantalum (Ta), a strong, ductile, and widely used metal that serves as an ideal test of scientific understanding of high-pressure material response. 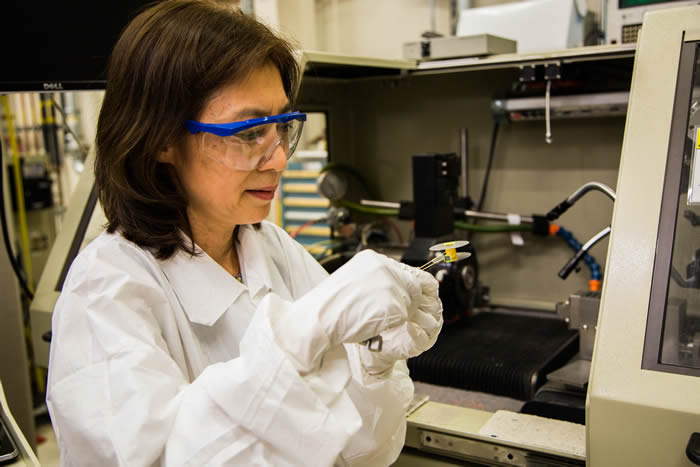 NIF & Photon Science researcher Hye-Sook Park holds a hohlraum used in NIF experiments to test the strength of tantalum at a previously unobtainable combination of pressure and strain rates.

A NIF experimental campaign known as TaRT—for Tantalum Rayleigh-Taylor—examines tantalum’s material strength, or resistance to deformation, when subjected to up to five megabars (five million atmospheres) of pressure generated by NIF’s giant lasers. 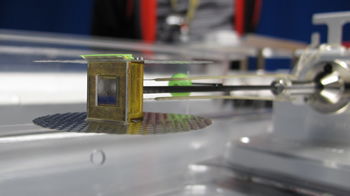 Image of the target used in an April 5, 2015, material strength tantalum Rayleigh-Taylor (TaRT) experiment. The rippled tantalum experimental payload is mounted on a large x-ray drive hohlraum, and the green puck in the background is the backlighter package that provides the x rays for radiography.Strength is known to increase under high pressure and high strain rates, but most theories are calibrated only under low pressure and low strain rate regimes. Understanding material strength under high pressure is a key interest in Stockpile Stewardship, Discovery Science, and many other scientific areas.

Beginning in 2010, the experimental team studied Ta strength at less than one Mbar at the OMEGA Laser Facility at the University of Rochester’s Laboratory for Laser Energetics (LLE). Once they had maxed out OMEGA’s available laser energy, they moved to NIF in order to reach pressures ranging from three to five Mbar. The first TaRT experiment at NIF was conducted in 2013.

To study tantalum under such high pressure, the research team created a ramp-compression technique using a reservoir/gap configuration mounted on the side of a large hohlraum 10 millimeters wide and 13 mm tall, or about twice the size of normal hohlraums. In order to create the pressure “gently” without shocking and melting the sample, the team uses low-density foams with a sinusoidal ripple pattern. Under pressure, the ripples grow via the Rayleigh-Taylor (RT) hydrodynamic instability mechanism. If the material is strong, the ripples will grow less. If the material is not strong, the ripples will grow more. The amount of ripple growth is measured by x-ray radiography.

Radiographs show Rayleigh–Taylor ripple growth in tantalum subjected to laser beams at three different delay times—40, 55, and 75 nanoseconds (left to right). The delay time is the time difference between when the laser drives the tantalum sample and when the backlighter beams turn on (see “Automating NIF Beam-Timing Delays”). The higher ripple contrast exhibited at later times represents how the ripples have grown, which is used to infer sample strength.

“Strength is directly related to the material’s compressibility,” said Hye-Sook Park, experimental leader for the TaRT campaign. “From NIF experiments of 3.5 and 5.0 megabars, we have observed that the tantalum became even stronger—at least two times stronger than the prediction of the strength models,” Park said. “Experiments continue to advance our physics understanding of material behavior under high pressure and to develop new theory and simulations based on our experimental results.”

LLNL scientists are joined in the collaboration by researchers from the UK’s Atomic Weapons Establishment, Los Alamos National Laboratory, General Atomics, and LLE.