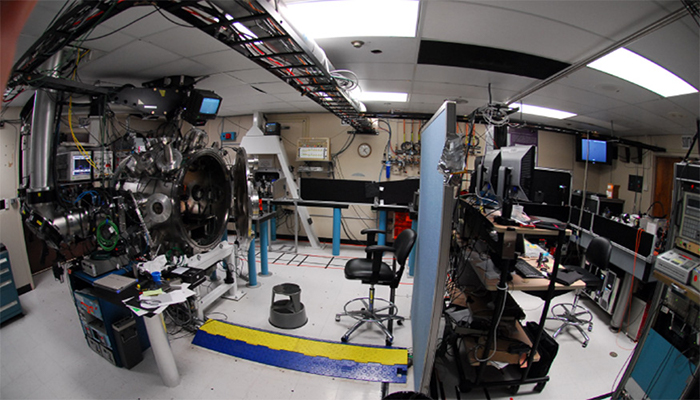 LLNL’s Jupiter Laser Facility was used to achieve slow and fast light inside plasmas, demonstrating the ability to tailor the refractive index of a laser-plasma system.

Slow and fast light, or large changes in the group velocity of light, have been observed in a range of optical media, but the fine control over the refractive index necessary to induce an observable effect has not previously been achieved in a plasma.

In a paper published in Physical Review Letters, scientists from LLNL and the University of Rochester’s Laboratory for Laser Energetics (LLE) describe how a laser-plasma system can be tuned to produce large and measurable changes in the group velocity of light, a technique that could further NIF’s quest for fusion ignition.

Clément Goyon, lead author of the paper titled “Slow and Fast Light in Plasma Using Optical Wave Mixing,” said the team achieved both slow and fast light inside plasmas, demonstrating the ability to tailor the refractive index of a laser-plasma system.

The finding could help refine the exchange of energy between overlapping laser beams as they enter NIF’s hohlraum targets, a technique known as cross-beam energy transfer, or CBET. CBET has been used in recent Hybrid-E experiments on NIF that have increased the amount of energy absorbed by the target capsule, the fuel kinetic energy, and hot-spot internal energy, resulting in significant improvements in implosion performance.

Goyon explained that CBET relies on correctly predicting the nonlinear optical properties of plasma using linear theory. Additionally, plasma-based replacements for a range of standard optical components would allow the manipulation of light at extreme fluences, or energy densities.

“Slow and fast light is the tip of the iceberg. The community has increased its understanding of optical nonlinear plasma properties over the last decades,” he said. “Being able to predict and use plasma properties to our advantage is critical for high-energy laser experiments in high energy density physics and inertial confinement fusion.” 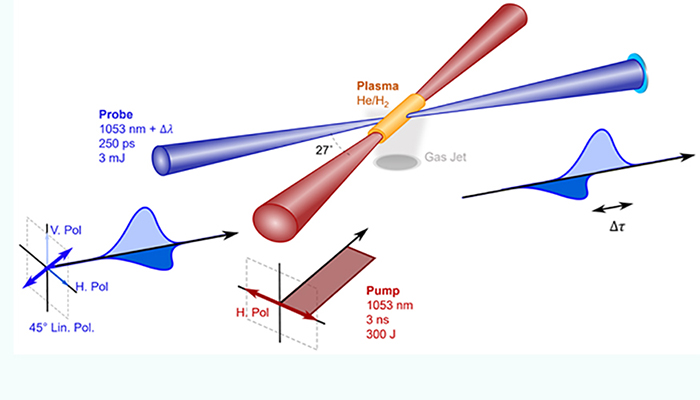 This image depicts the experiment schematic where the probe and pump beams interact in a plasma formed by the pump.

The experiment was conducted at the Jupiter Laser Facility, where an energetic pump beam and a low-energy probe beam were crossing inside a helium/hydrogen (He/H) plasma. By tuning the wavelength difference between the two beams, the team was able to change the pulsed light group velocity from 0.995c to 0.12c and -0.34c (c equals speed of light in a vacuum, or approximately 300,000 kilometers per second).

Pierre Michel, who helped pioneer the CBET technique and whose group helped fund the project, said laser-plasma interactions are notoriously difficult to control and predict.

“However, by demonstrating slow and fast light in plasmas,” Michel said, “I feel we have achieved a new stepping-stone for the applications of plasmas as an optical medium for high-power lasers, by reproducing one of the most confounding and delicate achievements of modern nonlinear optics using plasma. This helps advance the case for using plasma as a medium in the design of future generations of high-power lasers.”

The work was funded by LLNL’s Laboratory Directed Research and Development program.