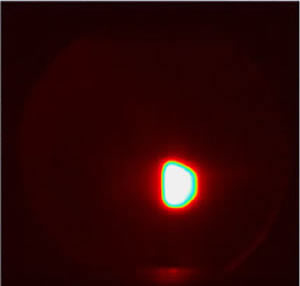 The first image of a photobeam from the X-band photoinjector system.

“Thanks to the work of this team, both current and past, in the design and assembly of this state-of-the-art accelerator,” said Principal Investigator David Gibson, “we managed to get photoelectrons on our first try putting the laser on the cathode.”

Last February, the test station’s XL-4 klystron and high-power solid-state modulator, which provide the microwave energy for the photoinjector, demonstrated the ability to produce more than 50 megawatts of X-band (11.424-gigahertz) power for 400 nanoseconds at a repetition rate of ten times a second. X-band radiation is in the microwave portion of the electromagnetic spectrum; only the SLAC National Accelerator Laboratory in Menlo Park, the CERN high-energy physics facility in Europe, and the KEK high-energy accelerator laboratory in Japan can produce X-band power at this level.

“This (Jan. 30) result represents the first time that modern X-band klystrons have been coupled to modern solid state modulators to create a compact accelerator,” noted NIF&PS Chief Technology Officer Chris Barty. “Such capability puts LLNL at the forefront of modern compact accelerator R&D, and with the hardware created by this team, LLNL now has the base accelerator hardware required to create future laser-Compton gamma-ray and x-ray sources with four to five orders higher spectral density than T-REX,” LLNL’s previous Thomson-radiated extreme x-ray system. 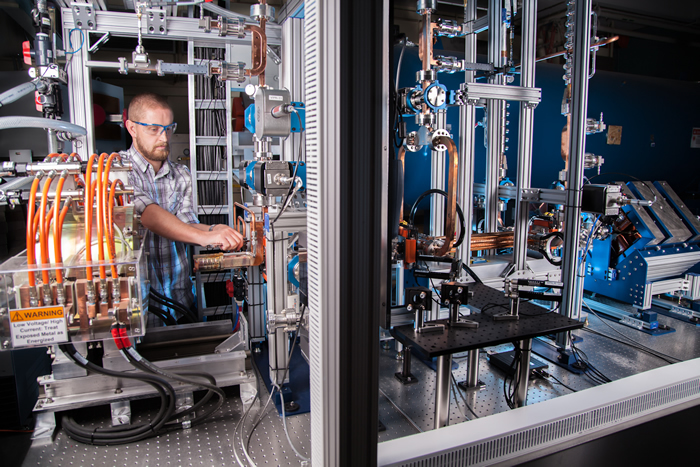 Scott Fisher works on the X-band photoinjector in the basement of Bldg. 194.

Gibson said the traveling-wave linear accelerator, which is being developed in a collaboration between NIF & Photon Science and the Laboratory’s Physical and Life Sciences Directorate, will produce up to 30MeV (30-million-electron-volt) electron bunches and with upgrades could eventually reach 100 MeV. The multi-bunch test station is being developed to investigate accelerator optimization for future upgrades in support of LLNL’s Compton-scattering gamma-ray source efforts. The test station will enable work to explore the science and technology paths required to boost the current MEGa-ray system to a higher effective repetition rate, potentially increasing the average gamma-ray brightness by two orders of magnitude.

X-band power, instead of the S-band (2.856-GHz) power now used in many accelerators and in T-REX, enables the accelerator system to produce higher-energy electrons with greater accuracy in a shorter distance. The new accelerator technology will allow the MEGa-ray system to be more than four times smaller than T-REX, making possible a portable MEGa-ray source and detector for precision assays and images of nuclear waste canisters, cargo containers, nuclear fuel rods, and other objects that might contain uranium or plutonium.

A paper describing an experimental campaign designed to measure the signature of an atomic ablator-gas mix in the deceleration phase of gas-filled capsule implosions on NIF was the cover article in the Jan. 17 edition of Physical Review Letters.

The campaign also was intended to improve the ability to model the mix in 2D simulations and assess the importance of atomic mix to yield degradation. In the experiments, plastic capsules containing layers of deuterated plastic placed at various offsets from the inner surface of the shell were filled with high-purity tritium gas to allow the shell-gas atomic mix to be studied by measuring the DT neutron yield and ion temperature. 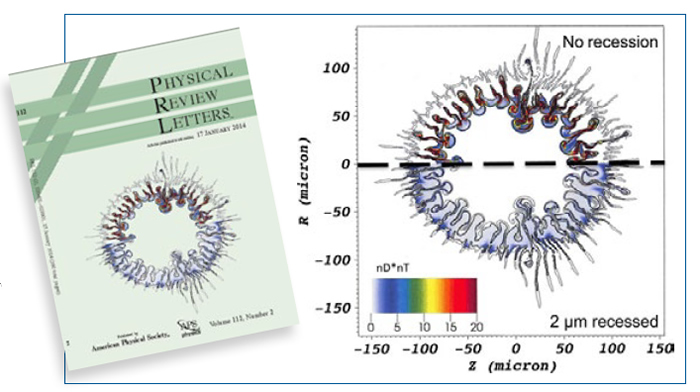 Image on the cover of the Jan. 17 issue of Physical Review Letters shows examples of 2D simulations of the product of deuterium and tritium number densities at a peak burn for NIF implosions with a nonrecessed CD layer (upper half) and a 2.27-micron recessed CD layer (lower half). This product is proportional to the DT reactivity at the burn time, and shows the atomically mixed region where 14 MeV neutrons originate.

As the reactants were initially separated during the implosion, the deuterium-tritium (DT) fusion yield provided a direct measure of the atomic mix of ablator into the hot-spot gas. While the tritium-tritium (TT) fusion reaction probed conditions in the core of the implosion hot spot, the DT reaction probed a mixed region on the outer part of the hot spot near the ablator–hot-spot interface.

The results suggest that low-mode hydrodynamic instabilities were the primary sources of yield degradation, with the atomic ablator-gas mix playing a secondary role, the researchers said. Based on these results, the ignition program has moved toward mitigation of the instability growth and the seeds of these low-mode modulations in future ignition designs. The experimental data also were used to develop and validate the atomic-mix model used in two-dimensional simulations.

Lead author Vladimir Smalyuk was joined on the paper by LLNL colleagues and collaborators from Los Alamos National Laboratory, the Laboratory for Laser Energetics at the University of Rochester, the Massachusetts Institute of Technology, General Atomics, and the Atomic Weapons Establishment in the United Kingdom.

In January, the HAPLS team submitted a major contract deliverable to the satisfaction of the project’s Czech sponsor. This was a detailed technical report on how the laser system is being designed to deliver high-quality pulses as short as 30 femtoseconds per pulse. Known as “dispersion management,” the report provides details of the optical layout in the “front-end” and “compression” stages of the system.

The report’s principal authors were Tom Spinka, Andy Bayramian and Constantin Haefner. HAPLS is based on the groundbreaking “E23” laser technology developed by NIF&PS over the past few years.

A planarization process can increase the resistance of laser mirror coatings to damage from infrared laser light by as much as 20 times, LLNL researchers and collaborators reported in an invited Applied Optics paper published online on Jan. 15.

The researchers said substrate nodular defects in optical interference mirror coatings can behave as microlenses, intensifying laser light into the defect structure. Depositing a thick planarization layer effectively smoothes over the defect, and a nearly defect-free multilayer can then be deposited on the nearly planar surface. 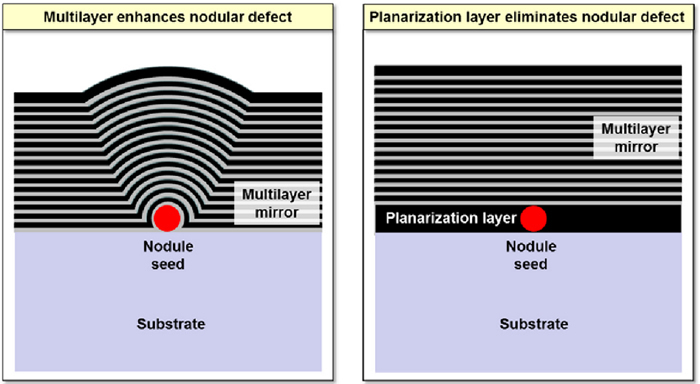 A typical nodular defect (left), and an ideal planarized defect.

The process developed for the study consisted of 50-nanometer (nm) silica deposition followed by ion-beam etching of half, or 25 nm, of the deposited layer. This process was repeated until the desired level of planarization was achieved. Substrate defect planarization was shown to increase the laser resistance of infrared mirror coatings to greater than 100 joules/cm2, an increase of 20-fold, when tested with 10-nanosecond infrared laser pulses. 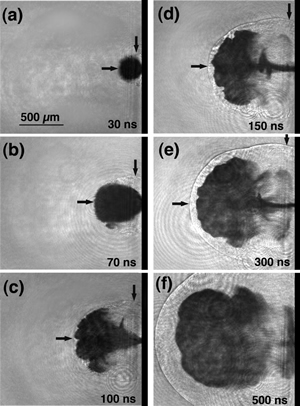 Shadowgraphic images capture the expansion of the ejected gaseous material in calcium fluoride at laser probe delay times ranging from 30 to 500 nanoseconds. Air is on the left side of each image and the gray-black interface represents the surface of the material; the laser beam propagates from right to left.

Among an array of optical materials tested, CaF2 produces a distinctive ejected material plume that is clearly visible using time-resolved shadowgraphy microscopy, providing the means to better understand this process.

The researchers found that under typical operational conditions of high-power lasers at ambient conditions, the gaseous material does not expand beyond about two millimeters from the surface. A non-symmetric expansion of the shockwave at early probe delay times can be attributed to the piston-like compression of the surrounding air by the directionally expanding gaseous plume behind it.

A backflow observed after the initial expansion leads to exposure of the cold surface to the hot ejected gaseous material, causing re-condensation and material deposition. It also can cause a change in the trajectory of microscopic ejected particles, depending on their size and speed as well as the backflow speed. This backflow can cause contamination of the surface, which then can act as a source of additional damage initiation and growth. The results also suggest that the material ejection is prolonged, extending more than 300 nanoseconds after termination of the laser pulse. 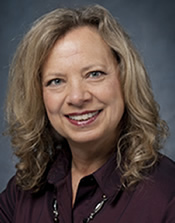 The Website notes that Folta is responsible for a 100-person workforce with an expertise in applying the latest computing technologies to plan, configure, control and analyze a broad variety of NIF experiments. Her profile is here. Pascale Di Nicola of NIF&PS also has been nominated by DOE to appear on the Website.

A Rochester, NY, high school student who developed an innovative approach to NIF capsule implosions has been named a semifinalist in the prestigious Intel Science Talent Search.

Yifan Kong, a senior at Webster Schroeder High School, is among 300 national semifinalists chosen from among 1,794 students who entered the competition. She won the recognition for a research project she carried out last summer at LLE. Yifan worked on the design of an experiment proposed for NIF in which 24 of NIF’s 192 beams are to be used to irradiate and implode a small spherical capsule to produce a short pulse of protons. Yifan conducted hydrodynamic simulations to optimize the choice and aiming of the beams and produced an innovative design that promises to implode the capsule with a high level of uniformity.

As a semifinalist, Yifan will be awarded $1,000 and her school will receive $1,000 to support its science, math and engineering programs. Yifan has a chance to be included among the 40 finalists chosen to attend the Science Talent Institute in March in Washington, DC, to compete for college scholarships totaling more than $600,000.